- Strong end to the week for AUD on the cards
- But challenges for AUD still remain says Crédit Agricole
- GBP/AUD forecast back above 2.0 by year-end

The Australian Dollar looks set to finish another week with a sizeable gain against the Pound, Euro and U.S. Dollar, aided by another rally in global stock markets and commodity prices.

Iron ore, coal, copper and oil are all trading higher amidst expectations that the global economy is in recovery mode now that the covid-19 pandemic is fizzling out and economies are opening with little signs of a second wave of infections on the radar.

"Commodity currencies remain strong performers as industrial metals continue to grind higher in their recovery, while oil prices hold onto their recent recovery, after a minor wobble, as OPEC+ suggest they have resolved some internal disputes and may announce further measures to the current supply cut programme this weekend," says Robin Wilkin, Global Cross Asset Strategist at Lloyds Bank. 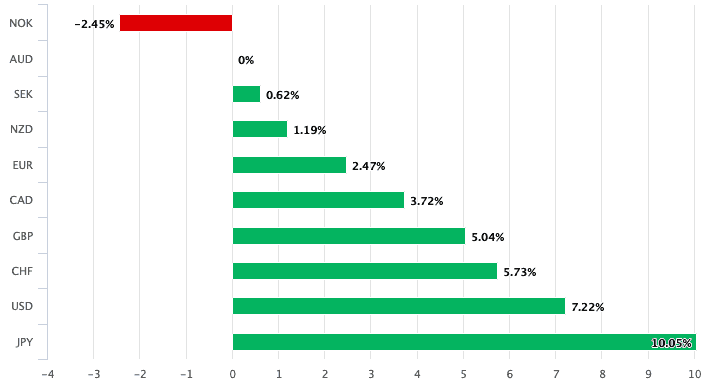 Above: AUD performance against major peers over the past month

While the AUD is one of the best performing major currency of the past month, this stellar run is not expected to last according to analysis from investment bank Crédit Agricole, whose analysts say a turn lower is likely over coming months.

According to analysis from the French-based global financial services provider, uncertainty over the impact of the covid-19 crisis on the Aussie economy, combined with fears over an escalation in China-U.S. and China-Australia tensions are all likely to contribute to underperformance.

Domestically, the economy faces a difficult opening up period says Valentin Marinov, Head of G10 FX Research & Strategy at Crédit Agricole, "the Australian economy will have to negotiate a difficult period of opening up its economy as, unlike northern hemisphere countries, it will have to do so during winter – peak cold and flu season".

"The extent of the damage to the Australian economy from the coronavirus is still unknown, and the economy is highly vulnerable (more so than many other G10 countries) to external shocks given its highly levered household sector," notes Marinov.

"We continue to believe the government and the RBA’s measures to combat the negative effects of the coronavirus on the economy are first class, but it is too early to declare victory. Australia’s big four banks have seen precipitous falls in their profits in part due to large impairment charges because of the coronavirus," says Marinov.

Trading updates from Commonwealth Bank, Westpac, National Australia Bank and ANZ Bank saw the lenders pencil in a combined $5BN in provisions for bad and doubtful debts caused by the pandemic.

Profitability will take a hit after banks extended repayment holidays for six months on 392k home loans and more than 170k business loans in an attempt to keep households and businesses afloat during the shutdown.

But perhaps the most significant factor to consider with regards to the Australian Dollar's outlook is the building trade tensions between Australia and China.

"We also note building tension between Australia and China as the former successfully pushed for an inquiry into the origins of the coronavirus and has expressed dissatisfaction with China’s latest moves in HK. The consequences of Australian-Chinese tensions for Australia have so far been modest," says Marinov. 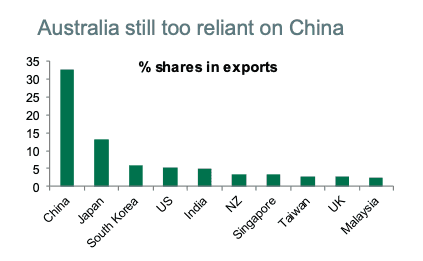 However, should China seek to further ramp up the pressure on Australia the country's terms of trade could well deteriorate further, with implications for the currency.

In late May it was reported China was looking to tighten import rules on foreign coal, starting with shipments from Australia. On May 21 it was meanwhile reported Chinese custom officials are set to impose new inspection procedures and rules on iron ore imports from next month.

But the layers of risk extend from just China-Australia tensions to U.S.-China tensions according to Crédit Agricole.

"While China continues to meet its obligations under its phase-one trade agreement with the US, China is challenging the US on the political front. We expect tensions to be a long-standing theme in the run up to the US Presidential election as both Donald Trump and Joe Biden vie to be the ‘tough guy’ against China," says Marinov.

Based on the bank's forecasts for GBP/USD and AUD/USD, the GBP/AUD exchange rate cross is forecast at 2.03 by September 2020 and 2.01 by year-end.