- AUD near end of road as GBP stabilises, Westpac forecasts.

- AUD/USD seen topping out as GBP/AUD close to bottoming.

- AUD advance stemmed by valuation concerns for time being.

- While RBA rate cuts and QE program to weigh later in 2020.

The Australian Dollar is one of the top performing currencies of the past week but analysts at Aussie lender Westpac have questioned the viability of the rally and warned that the Reserve Bank of Australia could yet consider introducing quantitative easing measures to boost the economy.

The calls come as the Aussie Dollar looks to overturn its poor start to 2020. The Australian Dollar is an out-performer on global currency markets amidst fading investor fears over the impact of the coronavirus and increasing bets that the antipodean central banks are not likely to cut interest rates in the near future.

A recovery in the Australian Dollar means the the Pound-to-Australian Dollar exchange rate has fallen nearly 3% from its end-January highs while the AUD/USD rate is up 1.35% from its 2020 low set earlier in February as market concerns over the global economic impact of the coronavirus infection in China have faded.

Australia's Dollar is the most exposed of all majors to a Chinese economic crunch due to the significant trade relationship between the two countries, so the currency could remain buoyant for as long as the growth rate of new Chinese coronavirus infections continues to decline although Westpac forecasts suggest the Aussie has already made all of the gains that it's likely to for the time being.

"It is not surprising that the coronavirus could have such a marked impact on the Australian dollar in such a short time. China is our number one trading partner and, even if the outbreak is contained by the end of the fi rst quarter, the shock to growth will be substantial," says Elliot Clarke CFA, an economist at Westpac. "With regards to fair value for the Australian Dollar, the net effect of commodities over the past two months is then negative, but limited in scale." 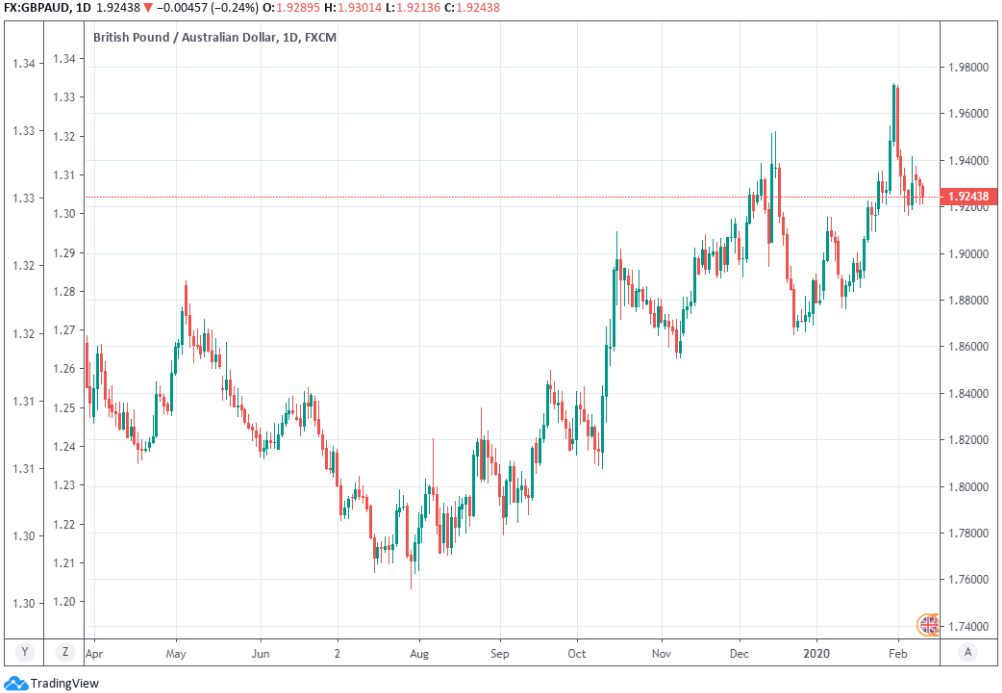 Coronavirus and the resulting implications for global growth has crushed commodities in recent weeks, driving iron ore prices down by some 12% and crude oil more than 20% off its January peak, which matters greatly because iron ore is Australia's number one export while crude oil has a substantial influence over the rates earned by for liquefied natural gas sales.

Those commodity price declines have reduced the 'fair value' of Australia's Dollar and left it at risk of appearing expensive, Westpac says, at a time when there are still plenty of other risks lurking on the path ahead that could yet further reduce the perceived value of the currency. Chief among those risks is the Reserve Bank of Australia and a still elevated prospect of it feeling compelled to resort to quantitative easing later in 2020 as it seeks to stimulate Australian economic growth and inflation.

"Having cut the cash rate to 0.25%, we continue to forecast that the RBA will embark on a QE program that will last for at least a year from late-2020. Absent this step, Australia’s competitiveness and corporate profitability could become impaired, and the lift back to trend GDP growth that we anticipate for 2021 (led by an emerging upturn in home building activity) may prove a stretch," Clarke warns. "The other factor holding the Australian dollar down through the remainder of 2020 is a further broad-based decline in commodity prices."

The RBA has cut the cash rate from 1.5% to 0.75% to rescue an already-insufficient inflation pulse from a trade war-induced global growth slowdown. And despite the economy having been ravaged by bushfires this year, as the coronavirus spreads in and outside of China, the bank has since convinced markets it won't be cutting rates again until at least August 2020. 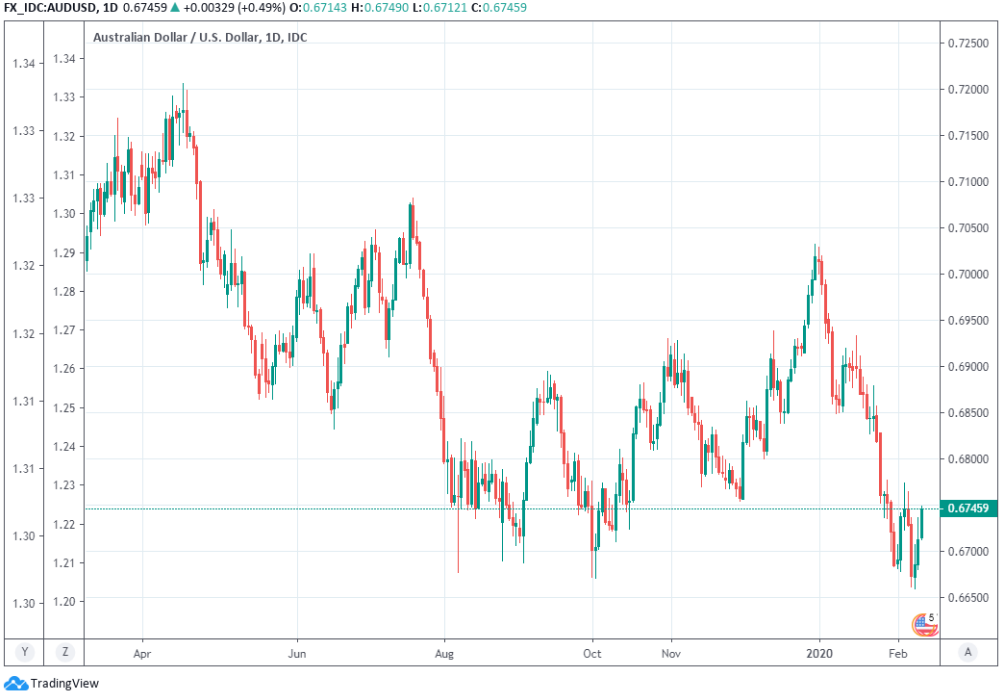 Westpac forecasts that moribund growth in the first half of 2020 will lead to higher unemployment and prompt two more rate cuts from the RBA by the end of August - in addition to an eventual QE program that would crush bond yields and further reduce the attractiveness of the Aussie to international investors.

The anticipated slow crystalisation of this outlook is seen barring the Australian Dollar's path higher from current levels in the months ahead.

"Currently the pair sits at USD0.67, but this follows a number of days when the currency traded below that mark in early February as coronavirus concerns peaked," Clarke says, of the AUD/USD rate. "Our timing has the RBA lowering rates in April (ahead of the US) and then again in August, down to 0.25%. With the three rate cuts in the US timed for the second half of the year, this will put a floor under the Australian dollar around mid year."

Westpac forecasts the AUD/USD rate will trade close to Wednesday's 0.6750 level until the end of March before declining to 0.66 by the end June. The Aussie is seen finishing the year at only 0.67 against the U.S. Dollar.

The Pound-to-Aussie rate is forecast to average Wednesday's 1.92 level through 2020, before declining to 1.81 before the curtain closes on 2021.

"In the lead in to Brexit at the end of January, we anticipated Sterling strength. By and large, this is what we saw. However, the honeymoon has proven much shorter than anticipated," Clarke says. "We therefore look for [GBP] to essentially mark time through 2020 and 2021." 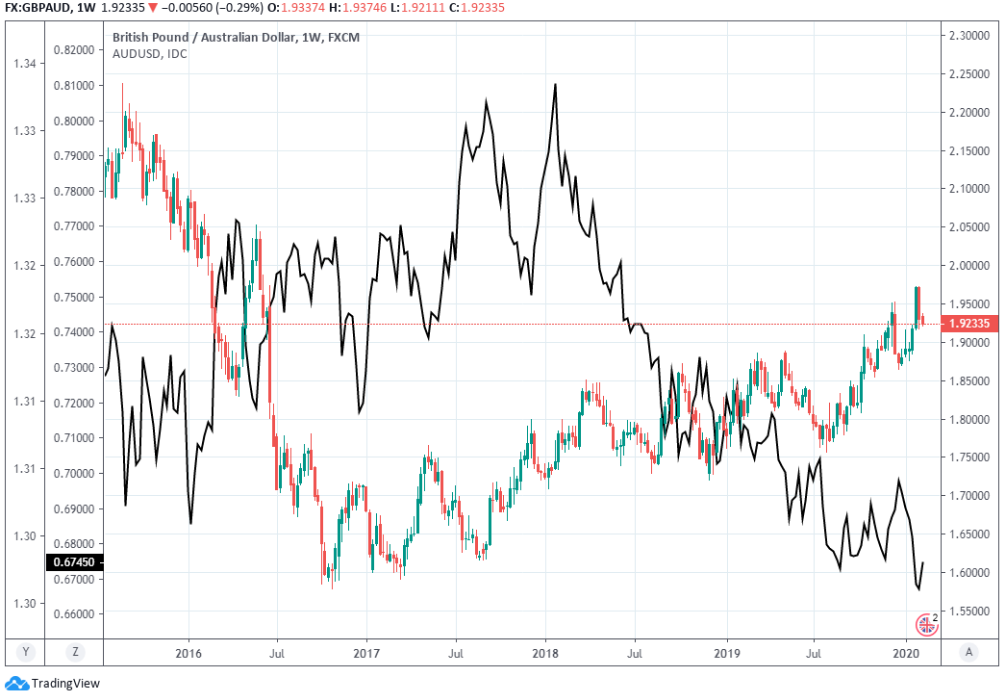