The Australian Dollar leads the charge on global foreign exchange markets on Tuesday, December 03. after the Reserve Bank of Australia (RBA) said improvements in the global economy meant no immediate interest rate cuts are necessary.

The currency found further support after it was reported today that the country recorded another current account surplus, which prompted analysts to suggest the medium-term outlook for the Aussie Dollar continues to improve.

In a statement following the decision to keep interest rates unchanged at 0.75%, the RBA said "while the [global] risks are still tilted to the downside, some of these risks have lessened recently."

"The AUD and interest rates jumped on the statement," says David Plank, an economist with ANZ.

The RBA meanwhile acknowledged that house "prices in some other markets have also increased recently" something Plank believes may also have been a factor in the market’s reaction.

The Aussie Dollar's strength meant the Pound-to-Australian Dollar exchange rate fell on the decision, going from 1.8970 down towards 1.8914, where it is located at the current time. 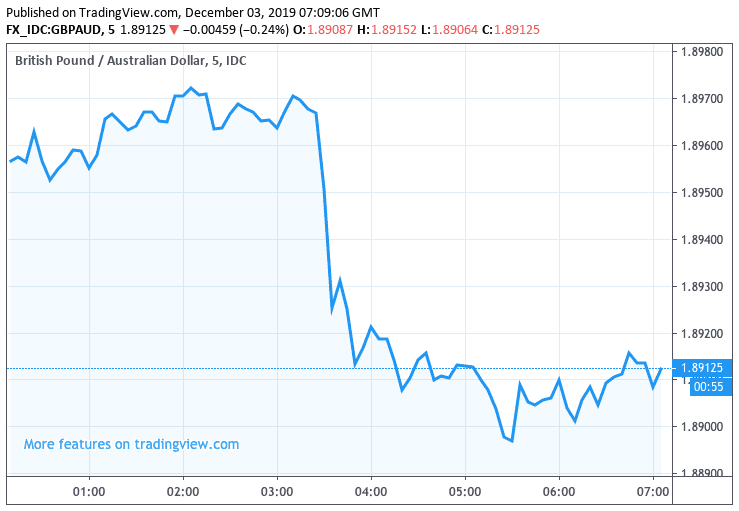 Foreign exchange markets have clearly made the judgement that the RBA is looking to press the pause button on the current cycle of interest rate cuts. Indeed, there has been talk of late that the RBA will continue cutting interest rates all the way down to 0.25%, and which point quantitative easing could be introduced in an attempt to stimulate the economy.

However, the typical side effect of such aggressive monetary easing is a weaker currency, therefore any suggestions that the RBA is stepping back from pursuing such a course would be positive for the currency.

"The RBA pointed out that the downside risks to the global economy have 'lessened recently'. Market participants may have interpreted the RBA’s inclusion 'the long and variable lags in the transmission of monetary policy' is a hint that another cut to the cash rate in February 2020 is not a done deal," says Joseph Capurso, a foreign exchange strategist at Commonwealth Bank of Australia in Sydney.

The RBA also emphasised its view that its policy easing has worked to support the economy by lowering the exchange rate, and boosting asset prices (which will increase spending, including on home construction).

The RBA's latest assessment is however considered to be spin by a number of institutional analysts we follow, who remain of the opinion that the RBA will in fact cut interest rates in 2020.

ANZ's Plank is not convinced the RBA has stepped back from its interest rate cutting cycle.

"We continue to see the next rate cut as being February, by which time the RBA will have made a 'full assessment' of the data and most likely have revised down its outlook for growth. This should be enough to convince it that further stimulus is required," says Plank, adding:

"Continued strong growth in house prices is one thing that may give the RBA pause. But the RBA’s concern is around credit rather than house prices per se. And credit lags the cycle materially, so we don’t think it will have picked up enough to prevent a February rate cut (or another in May, for that matter)."

If this analysis is correct, RBA policy will once again likely weigh on the Aussie Dollar in early 2020.

Trade Dynamics: A Fundamental Positive for the Aussie Dollar

However, for now at least, the outlook for the Australian Dollar has improved somewhat thanks to the country's ability to export more than it imports.

"The medium term outlook for the AUD is improving," says CBA's Capurso, reacting to Australia's latest set of trade finance data, out Tuesday.

According to the Australia Bureau of Statistics, Australia’s current account surplus in Q3 2019 read at $A7.9bn compared to $A6.1bn expected by markets.

The boost to the surplus comes as exports outstrip imports, thereby creating a positive supply and demand dynamic on the Australian Dollar.

ABS Chief Economist Bruce Hockman said: "For the first time in 46 years, we have had two consecutive current account surpluses."

Capurso says the structural shift in Australia's current account position from large deficits averaging 4.2% of GDP in the past three decades to small surpluses of 1.3% of GDP in Q2‑Q3 2019 indicates Australia is less reliant on foreign savings for domestic investment.

"The reduced reliance on foreign savings supports the fundamental valuation of AUD and makes AUD less susceptible to concerns about the global economic outlook," adds Capurso.