- Tariff reprieves and RBA dismissal of QE both positives for AUD.

The Australian Dollar bested its major rivals Wednesday in response to a cocktail of positive domestic and international developments, which some say will aid the currency even higher still over the coming days, although others doubt the sustainability of the antipodean unit's ongoing bounce.

Chinese officials are said to be propositioning the White House with another offer to buy agricultural goods ahead of talks aimed at de-escalating the trade war with the U.S., which are set to take place next month. The report came as China unveiled a list of U.S. products it will exempt from its own levies announced earlier this year in retaliation against tariffs imposed by the U.S. due to alleged unfair trading practices and intellectual property theft.

"While the decision of the Chinese government to exempt some US goods from tariffs may help risk sentiment today, we don’t see it as a game changer for the trade war outloo," says Petr Krpata, a strategist at ING. "We don’t look for a resolution any time soon and in fact expect a further escalation of the US-China trade dispute in coming months, with more tariffs coming."

The exemption decision came months after a public consultation and was expected sooner or later but investors have taken it as an omen of progress in the talks scheduled for October, prompting them to bid for so-called risk assets including the Australian Dollar on Wednesday. The trade war has hurt the Chinese and global economies, and Australia with its commodity-backed currency and large resources industry has been caught right in the crossfire.

The Aussie's also received an additional tailwind from the Reserve Bank of Australia (RBA) when it reiterated that an Australian quantitative easing program is unlikely to be needed over the coming quarters. RBA officials told a parliamentary committee that with the cash rate still at 1%, the bank likely has enough ammunition to support the economy through its soft patch without resorting to the controversial 'quantitative easing' seen in the U.S., UK, Eurozone and Japan since the financial crisis.

"AUD/USD also lifted to six‑week high of 0.6885 encouraged by the rebound in Asian equity markets, the softer USD, and some earlier “confirmed” news released by the RBA that “at this point it is unlikely that the Reserve Bank will need to employ unconventional monetary” says Kim Mundy, a strategist at Commonwealth Bank of Australia. "We see further short‑term upside in AUD until global risk aversion returns."

A quantitative easing (QE) program would see the RBA buy Aussie bonds in an attempt to lift inflation by stimulating the economy with lower bond yields, which are real-time borrowing costs. QE is thought to help the economy by speeding up the pass-through of low interest rates from central bank to real world borrower, but such tactics always lead currencies to suffer because fall bond yields represent falling returns to international investors who own the currency.

This is why the Aussie bounced strongly when the RBA was revealed to have again dismissed the idea as unnecessary on Wednesday, although the RBA policy outlook might not be so supportive of the Australian Dollar for very long if the market buys the latest interest rate forecsts from one of Australia's largest lenders. NAB said overnight that it now expects a further two RBA interest rate cuts before the end of March 2020.

"AUD/USD’s daily chart close above the August 8 high at .6821 confirms a bottoming formation. So far the 55 day moving average at .6872 has been reached. Further up sits the July 10 low at .6911. Were it to be exceeded, the early June high at .7022 would be next in line. Minor support is seen around the .6821 August 8 high," says Axel Rudolph, a technical analyst at Commerzbank. 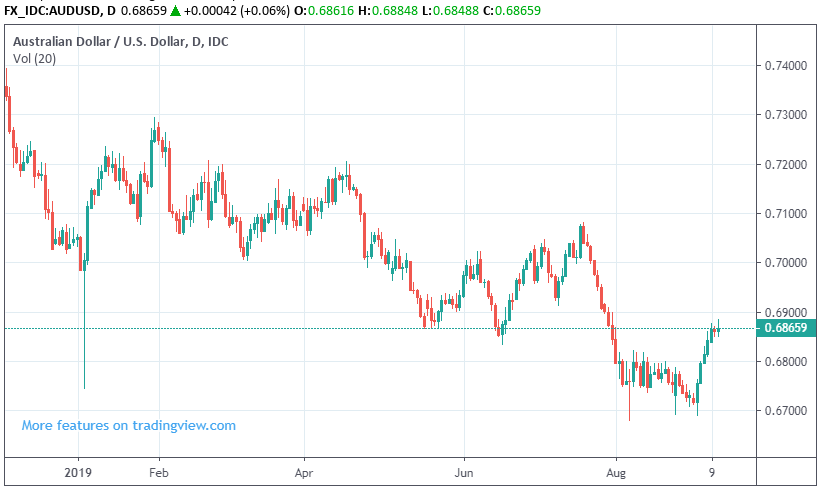 "We have changed our call on monetary policy. Previously we expected a cut in November to 0.75%, together with additional fiscal stimulus. We now expect a further cut to 0.5% in February, at which point the Reserve Bank would outline its plans on unconventional policy. Unless the government delivers a meaningful fiscal stimulus, a further cut to 0.25% by mid-2020 is likely, along with the adoption of nonconventional monetary policy measures," says Alan Oster, chief economist at NAB.

Pricing in the overnight index swap market implied on Wednesday, an RBA cash rate of 0.76% on November 05, 2019, which is the date of the RBA's meeting that month. This pricing means a November cut should be uncontroversial for the Aussie but the implied rate of 0.65% on February 03, 2020, the date of the RBA's meeting for that month, is above the 0.50% cash rate that would prevail if the RBA does cut a second time

The implied rate for February means financial markets are not prepared for the level of interest rate cuts now tipped by NAB for the months ahead and that the Australian Dollar could suffer if and when the market comes to recognise the new NAB scenario as likely. Oster, NAB's chief economist, says the Australian Dollar could remain around its current lofty levels for a short while if markets remain optimistic about the outlook for the trade war but he also forecasts fresh RBA-related losses in time for year-end.

"Further resolution of US-China trade tensions could see the Aussie reach US69.0c in the short-term. Our forecasts for the Aussie are unchanged, expecting a bout of near-term weakness, falling to US65.0c by year’s end before a gradual appreciation towards US70c over the next year. In the out year we expect the AUD to appreciated further," Oster says. 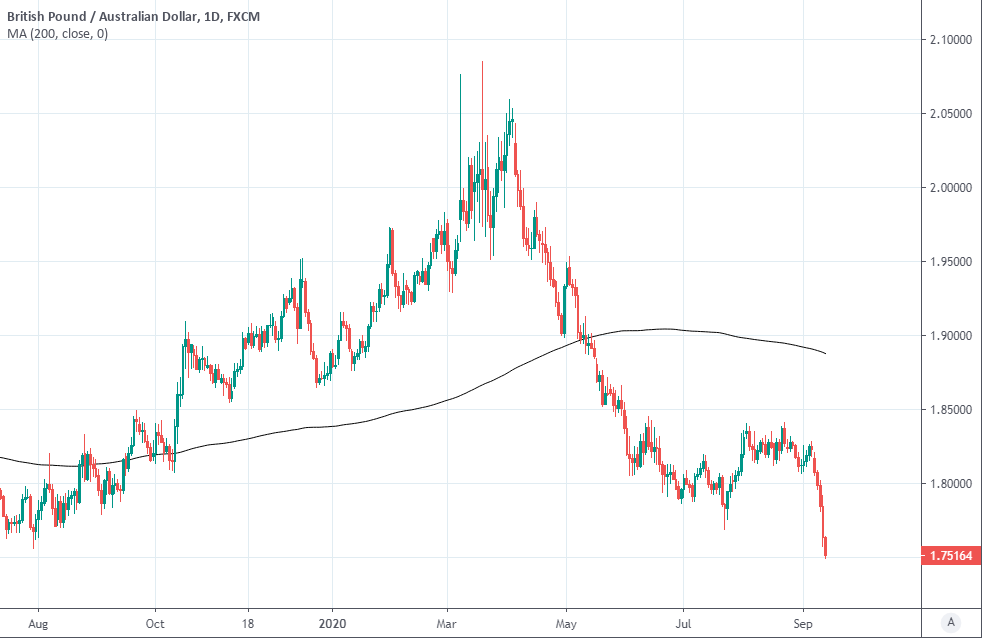 Australia's Dollar may be expected to hold its own relative to the U.S. greenback but the Antipodean unit has been tipped by another of Australia's major lenders to cede ground to Pound Sterling in the weeks ahead, as markets bask in the comfort provided by knowledge that the UK parliament has been suspended and that the Prime Minister's hands have been tied behind his back by the opposition and 'rebels' from within his own party.

Prime Minister Boris Johnson took no action to prevent Royal Assent being granted to an errant bill forced through the House of Commons by an opposition that, with Conservative Party MPs in tow, had thrown constitutional convention to the wind and hijacked the parliamentary agenda in order to impose legislation upon the government that forces it to request a third Brexit delay by no later than October 19 if an agreement with the EU has not been reached and parliament has not approved a 'no deal' exit.

The move has opened a constitutional can of worms and undermined the Prime Minister's hand in talks aimed at securing changes to the contentious and three-times-rejected agreement struck with Brussels by Johnson's predecessor Theresa May, but markets have bid Sterling higher because it's been seen as reducing the previously-elevated probability of a 'no deal' Brexit.

"GBP short-covering should extend somewhat during the parliamentary recess, given reduced danger of a hard Brexit after PM Johnson’s various parliamentary defeats. But an early election is still likely, with investors unlikely to be enthused about the major parties’ policy platforms," says Sean Callow, a strategist at Westpac. "In coming weeks, the pound should outperform, with scope for GBP/AUD 1.8350 and then 1.8500. Once an election becomes the main focus, sterling weakness should resume."

October is on course to be the best month for the Australian Dollar of 2021, with a 3.74% advance being registered against the U.S. Dollar to date.