- Looks for "accumulation of evidence" before cutting third time.

- Analysts say next move may not come until October meeting.

- But AUD gains unlikely to last Vs USD, some analysts say.

- As Westpac looks for the AUD to gain over safe-have JPY.

The Australian Dollar topped the G10 league table Tuesday after the Reserve Bank of Australia (RBA) signalled that it'll wait for a while before making any potential decision to reduce its interest rate further from current levels, although multiple analysts have said the bank will have to cut again before long.

Australia's Dollar slipped into pole position following the release of minutes from the August 06 policy meeting, with the largest gains wracked up over a Brexit-battered Pound, which was under pressure again Tuesday after Prime Minister Boris Johnson doubled down with his insistence on changes to the EU withdrawal treaty agreed by his predecessor in a letter to European Council chief Donald Tusk. The letter came amid rising clamour among the opposition for a no confidence vote in the government.

Reserve Bank of Australia board members decided to leave the cash rate unchanged at 1% earlier this month due mainly to uncertainty over the impact that an earlier two cuts would have on the outlook for the economy and inflation, the newly released minutes show. There was also hope on the board that tax cuts announced earlier this year by the government will aid the economy, although some members were concerned those funds would simply end up in savings accounts given the deteriorating growth outlook.

"The RBA sent a clear signal today that there needs to be a reasonably strong case to cut further," says Elsa Lignos, head of FX strategy at RBC Capital Markets. "This suggests that it may need to see a couple of months of data to make such an assessment." 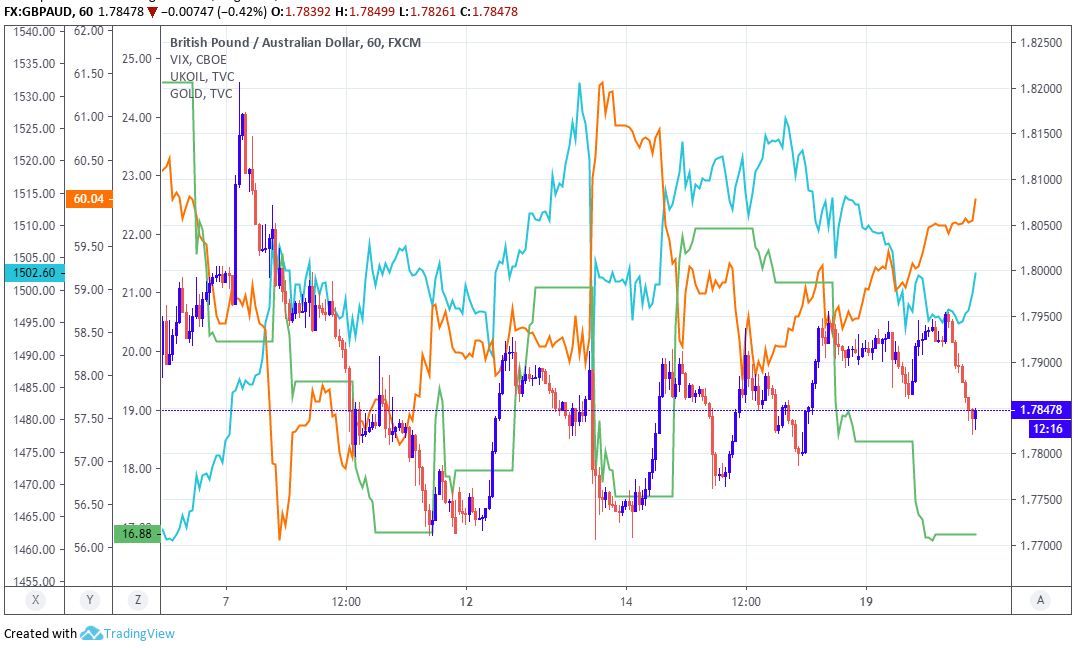 After cutting the cash rate from 1.5% earlier this year, policymakers agreed in August they'd like to see an “accumulation of additional evidence” that additional stimulus is necessary before acting again. Markets are now coalescing around the idea of a third 2019 cut coming in October.

The market implied RBA cash rate for December 03, the bank's last meeting of 2019, rose from 0.57% to 0.60% Tuesday as a result of the statement, although it remains a long way below the current 1% level and still indicates that markets are almost convinced another two cuts will be delivered later this year.

"We don’t think the domestic data since the August meeting meets the Board’s threshold of an “accumulation of additional evidence” says David Plank, head of Australian economics at ANZ. "This suggests a September rate cut is unlikely. We think October is in play, however, with some critical data due between the September and October board meetings such as Q2 GDP, business and consumer sentiment readings and labour market data." 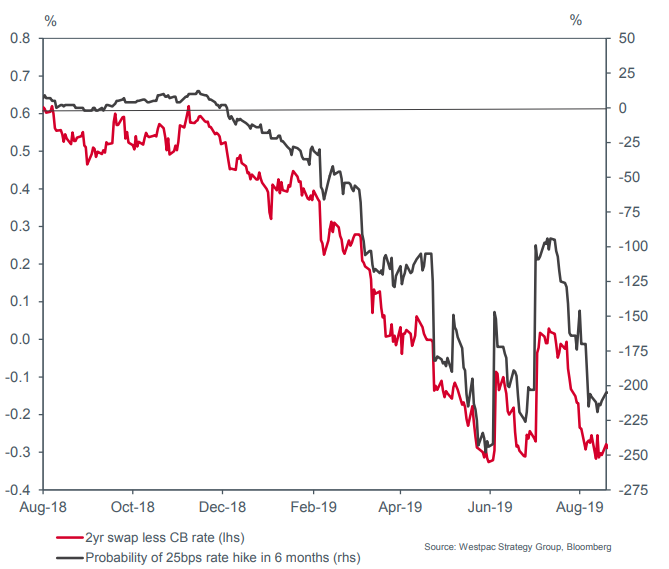 RBA Governor Philip Lowe and the board resorted this year to cutting the cash rate in in the hope of seeing the consumer price index rise back above the lower boundary of the 2%-to-3% inflation target. Austrlian inflation has been below the target level for much of the last five years or more, although the RBA's task has recently been made more difficult by an ongoing slowdown in both the domestic and global economies, which is partly the result of the U.S.-China trade war. 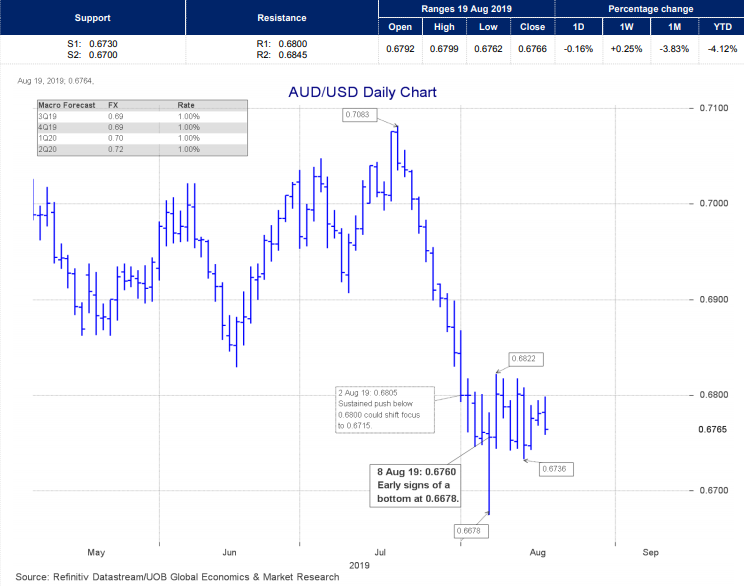 RBA rate cuts, and speculation about them in the runup to the actual decisions, have hurt the Australian Dollar in the last 18 months because they've seen the yield on Aussie government bonds fall beneath that of comparable paper issued by the U.S. government, while reducing the premium traditionally offered by Aussie fixed income assets relative to other G10 peers.

However, the RBA is not the only developed world central bank to have either cut its interest rate, or that is still expected to cut rates up ahead, as the existing club is widely expected to grow larger in the months ahead as the Federal Reserve and European Central Bank stimulate their economies. Speculation in derivatives markets also suggests there's some chance the Bank of Canada and Bank of England could cut rates in the next six months too.

"The RBA’s gradual dovish turn then its delivery of rate cuts have obviously weighed on AUD crosses this year but near term, AUD/JPY might find some support as the RBA holds steady in Sep, holding its view that the Australian economy is at “a gentle turning point"," says Sean Callow at Westpac. 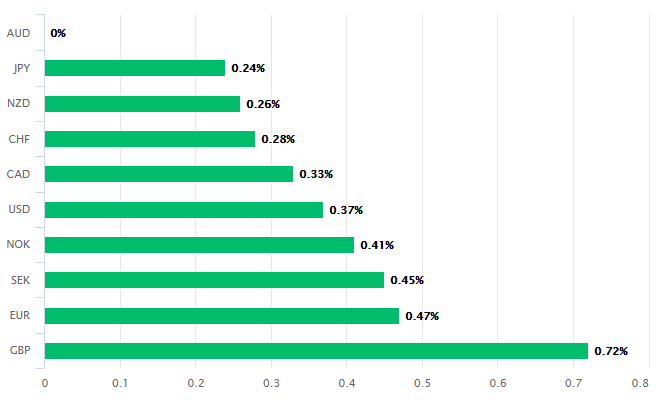 Foreign exchange analysts at Commonwealth Bank of Australia say the Australian Dollar is due a "pause for breath" from its multi-week trend of appreciation, amidst "surging coronavirus cases in the U.S. and elsewhere".

The Australian Dollar was outperforming major rivals on Friday gains were limited as risk assets ebbed in what was also the beginning of a long holiday weekend for Americans, which comes as the next Reserve Bank of Australia (RBA) policy decision looms over the week ahead.

The Pound-to-Australian Dollar rate faces a long and steady downtrend according to new forecasts from Aussie lender St George Bank, which sees the antipodean unit riding a global economic recovery back toward its post-float average in the coming years, although Sterling is tipped for a short-lived plateau this summer. 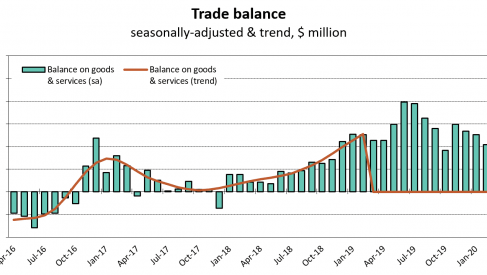 Australia continues to earn more from international trade than it spends, confirming that a significant fundamental anchor for the currency exists that could result in further strength over coming weeks and months.