- GBP/AUD fall not yet over but a recovery will follow says Westpac.

- GBP sell-off to reach crescendo, with new lows Vs AUD, in autumn.

The Pound wracked up heavy losses against the Australian Dollar Tuesday amid a deteriorating outlook for the British currency but the sell-off is not over yet, according to analysts at Westpac, who say further falls will blight Sterling this autumn but that a recovery will follow soon after.

Pound Sterling was on the ropes Tuesday as market fears over a possible 'no deal' Brexit on October 31 escalated, with not even the fastest wage growth in 11 years and a multi-decade low for unemployment being enough to support the British currency.

Even positive economic data is no longer to support Sterling because financial markets have all-but given up hope of seeing a Bank of England (BoE) interest rate rise in the near future. Uncertainty over the outcome of the Brexit process has been preventing the BoE from hiking rates ever since August 2018.

"The unemployment rate of 3.8% is the lowest in 45 years, wages growth has picked up from below 2% to well above 3% over the past 2 years and inflation is at the BoE’s 2% target," says Sean Callow, a strategist at Westpac. 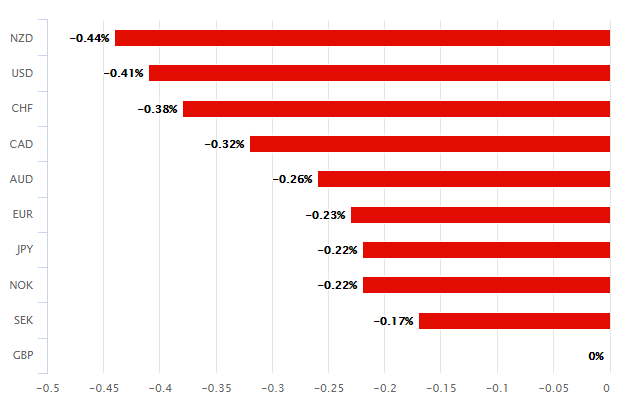 Bank of England Governor Mark Carney said on July 02 the UK's robust labour market "argues for" the bank to focus on the medium-term inflation outlook when making interest rate decisions, but he also acknowledged the deteriorating condition of the global economy and growing risks to the UK economic outlook.

Carney laid blame for the former directly at the feet of U.S. President Donald Trump in candid remarks that are rare among central bankers. But he also said Brexit is having a dampening effect on the UK's individual outlook and that August's inflation forecasts will have to reflect this.

Markets saw the comments as the BoE teeing itself up to cut its forecasts for inflation over the coming years in August, which could lessen the perceived need for interest rate rises up ahead. Until now the BoE's official line has been that it'll need to lift Bank Rate steadily in the years ahead to safeguard its 2% inflation target. 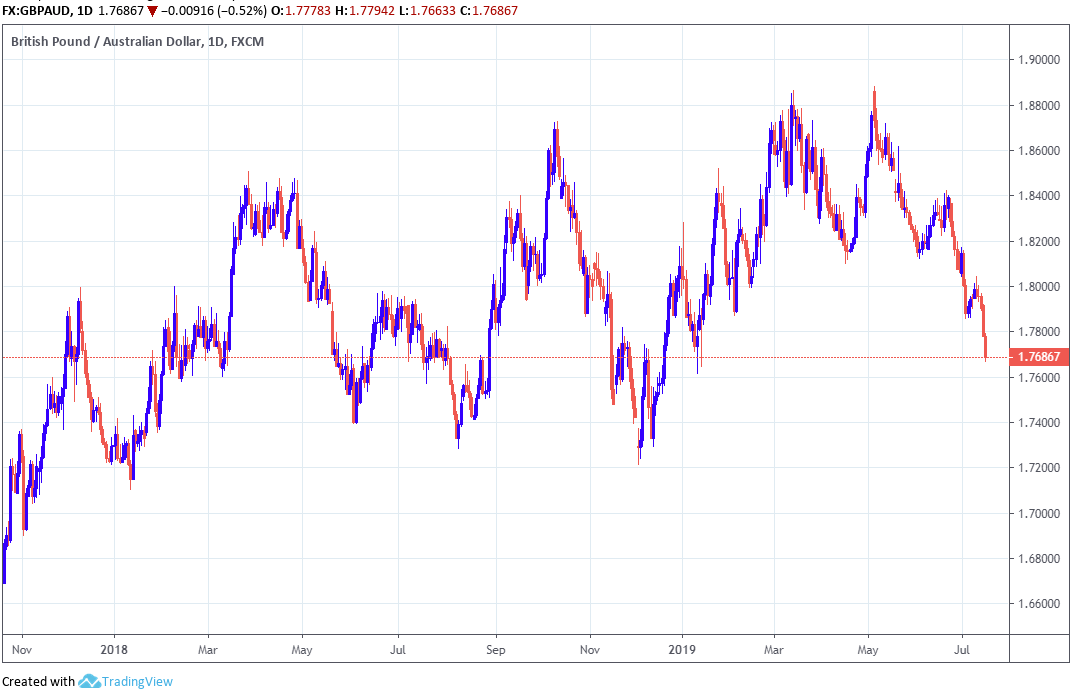 "Real money accounts also had a period of optimism in March-April that there could be either a “soft” Brexit or a second referendum. But in May, real money rapidly rebuilt shorts as Prime Minister May’s position became untenable and hardline Brexiteers jostled to replace her," Callow says.

The October 31 expiry of the current Article 50 negotiating period is drawing closer and both candidates to replace outgoing Prime Minister Theresa May are hinting that they'll use the threat of a 'no deal' Brexit to gain changes to the EU withdrawal agreement that Brussels already claims it won't countenance.

Former foreign secretary Boris Johnson has committed to leaving the EU whatever the weather in Westminster and Brussels on October 31, regardless of whether the EU removes the so-called Northern Irish backstop from the withdrawal treaty. This means a 'no deal' Brexit if the EU doesn't play ball.

However, the opposition Labour Party and some MPs within the Conservative Party have repeatedly threatened a vote of no confidence if the government pursues a 'no deal' exit, which would give way to a period where other parties attempt to form a coalition and in the event they fail, a general election.

Boris Johnson has refused to rule out suspending parliament in an effort to circumvent a no confidence vote, which Chancellor Philip Hammond recently described as the only way in which rebels on the government benches could be prevented from helping to bring down their own government. 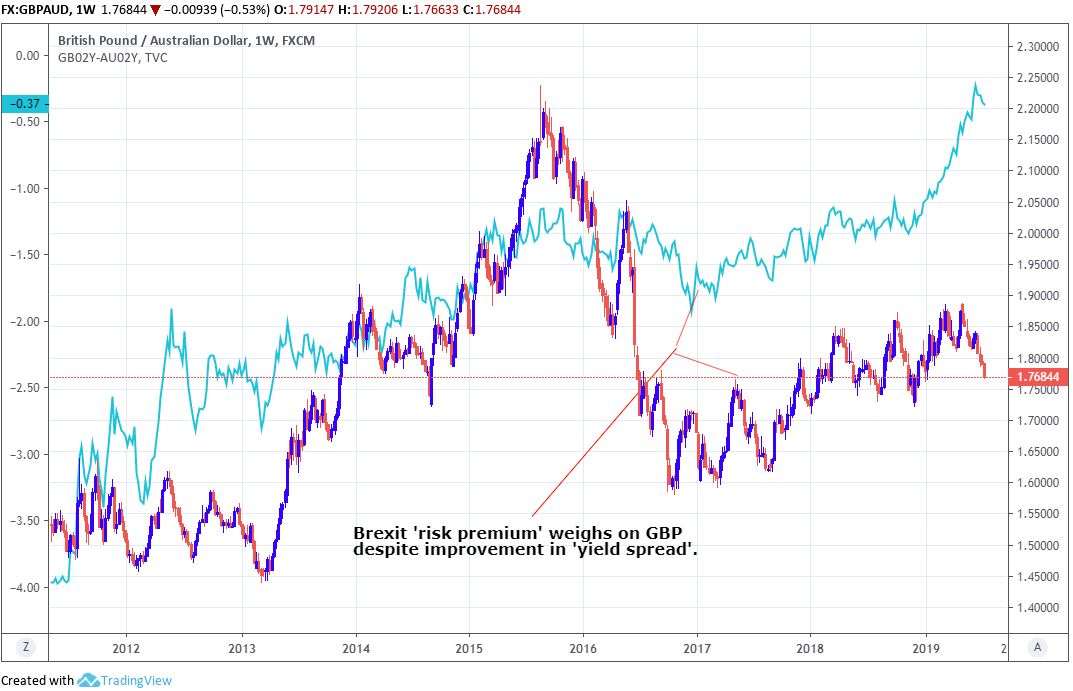 "GBP/AUD has more often followed the broad swings in market expectations for monetary policy at the RBA and BoE. So far in 2019, there has been little correlation," Callow says. "AUD’s yield advantage is very low in historical context and in isolation, yield spreads suggest plenty of downside risk for AUD."

The Pound has been falling against the Australian Dollar for the last eight weeks despite an economic backdrop that is nor immediately worse than that seen in Australia and in spite of both countries having benchmark interest rates that are rapidly approaching parity.

Sterling is no longer responding to current macroeconomic fundamentals because of market perceptions of what a 'no deal' Brexit might do to the economy further out into the future. The difference between the current price of the Pound and the 'fair value' implied by the bilateral interest rate differential reflects a 'risk premium' for investors.

The Bank of England has lifted the UK Bank Rate twice since the Brexit referendum, taking it up to 0.75%, while the Reserve Bank of Australia (RBA) has cut its cash rate twice this year leaving it at a record low of 1% this July. Markets are betting a third cut in November sees both rates at parity.

"Westpac still looks for a cut to 0.75% in November, accompanied by lower growth and inflation forecasts," Callow says. "We look for further sterling underperformance multi-week to around AUD/GBP 0.5675/0.5700 or GBP/AUD 1.7550/1.7625. Multi-month though, AUD should soften on a range of crosses, including against the pound, so the next few weeks could be its strongest levels for 2019." 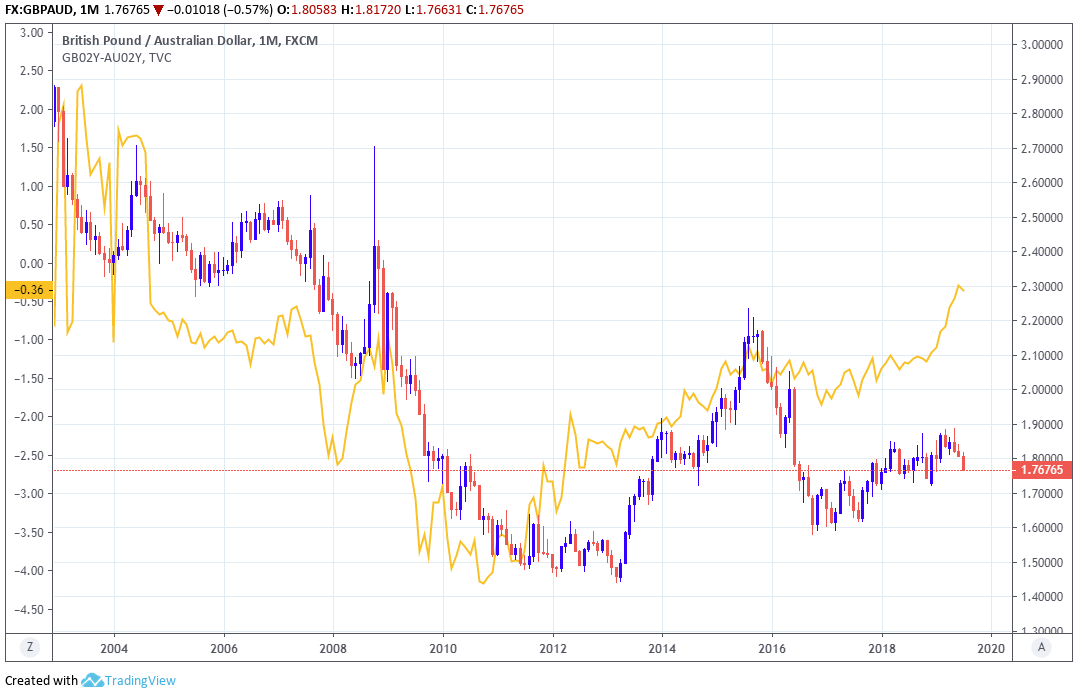