- GBP/AUD to extend lower as bear flag unfolds amid downtrend.

The Pound-to-Australian-Dollar rate was trading around 1.7914 Monday after falling almost a full percentage point in the previous week, but the pair is now in a downtrend that is expected to continue over the next five days.

The 4 hour chart shows the pair falling  steeply to a new low in the 1.78 area on July 3 before bouncing. It has pulled back over recent days but the correction is quite shallow and the downtrend is forecast to resume eventually.

The pair may have formed a bear flag price pattern, which is forecast to extend to a low of 1.7630. A break below the 1.7855 low could confirm an extension down to that target. We use the 4 hour chart to analyse the short-term trend, which means the next 5 days of trading. 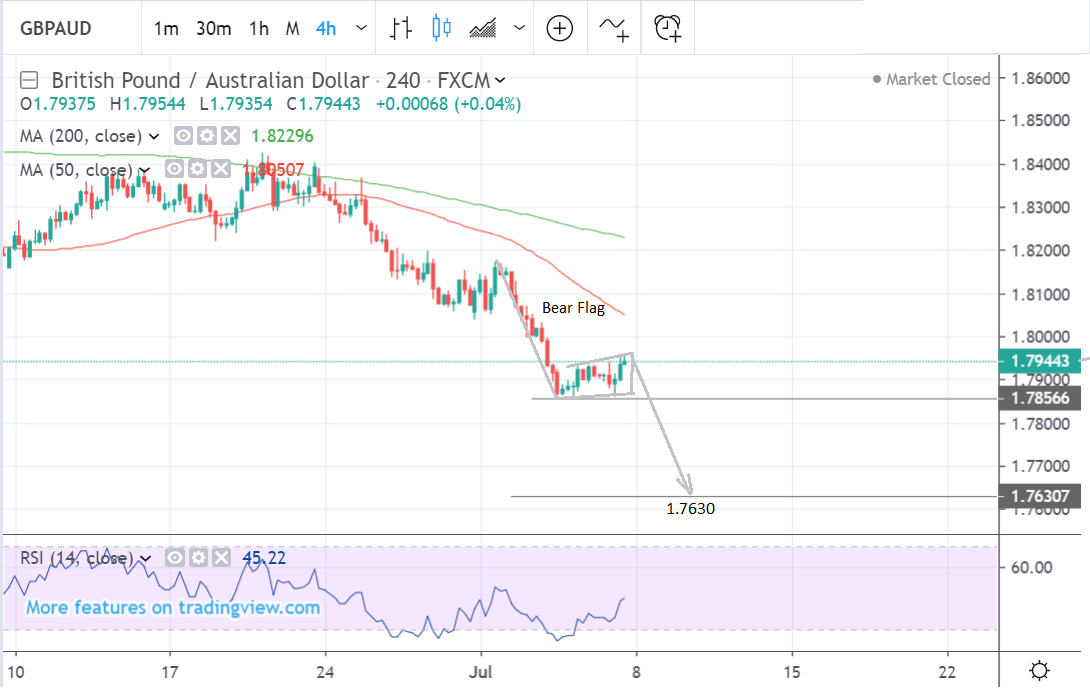 The daily chart makes the bearish case clearer. It shows how the exchange rate may be falling in a ‘measured move’ pattern. Usually, the C-D leg of the measured move is of a similar length to the A-B leg which would suggest a downside target of 1.7645.

Once the market has reached its target a period of sideways consolidation could follow. We use the daily chart to analyse the medium-term, which is defined as the next one-to-four weeks. 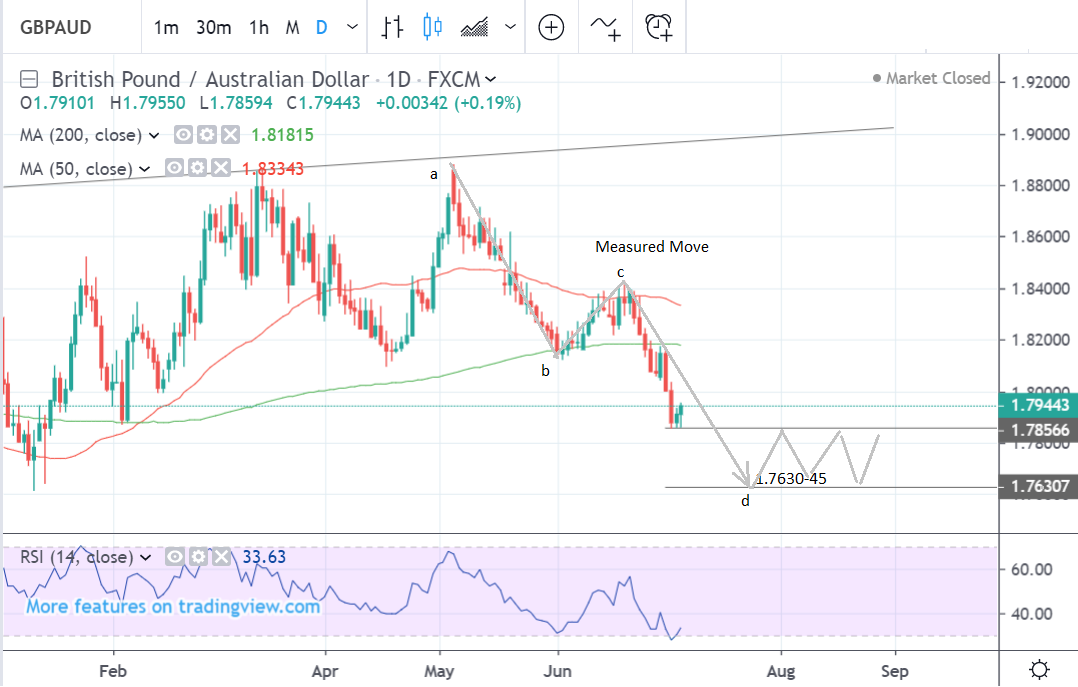 The weekly chart shows how the pair could be forming a broadening formation, (BF) which is a bearish price pattern. These are normally composed of 5 waves, labeled A-E and the next bearish wave down is likely to be a wave E.

This pattern indicates a potential target of 1.7000, which is the bottom of the formation. We use the weekly chart to give us an idea of the longer-term outlook, which includes the next few months. 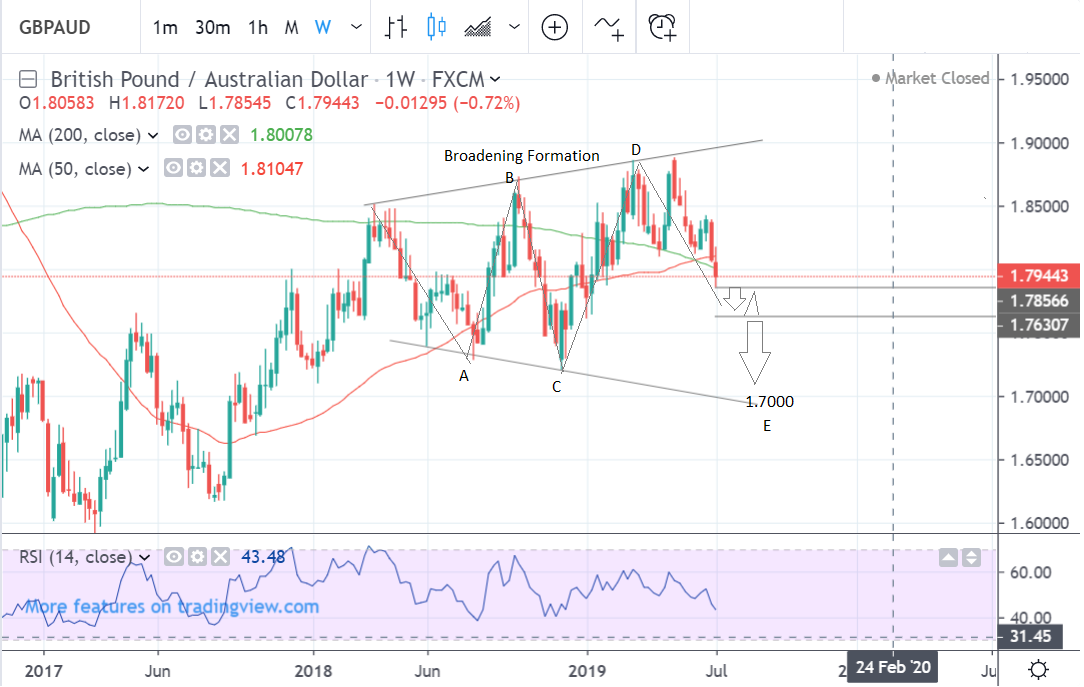 Australian Dollar traders will will no doubt be carefully watching Chinese trade data for June on Friday, likely scrutinising it for clues about the impact the trade war is having on the exports and growth of Australia's largest trade partner.

Consensus is for a rise in the Chinese trade surplus to $42.2bn from $41.7bn previously, with exports falling -2.0% but imports declining by a greater -3.0%. The data is out on Friday.

“A disappointing set of figures could pressure the yuan a little but not so much the Australian dollar – often seen as a better liquid proxy for the yuan as China is the main destination for Australian exports,” says Raffi Boyadijian, an economist for FX broker XM.com. “The aussie has been benefiting from higher iron ore prices and narrowing negative spreads between Australian and US yields so is likely to hold firm unless China’s trade stats cause a major deterioration in risk sentiment.”

On the domestic front, the NAB Business Confidence index is seen declining to 2 for the month of June, down from 7 previously, when the figures are released at 02.30 BST on Tuesday, July 9.

Home loans are expected to have fallen -0.6% in May, a lesser decline than the 1.2% fall seen back in April, when the latest figures are released at 02.30 on Thursday. Given concerns about the Australian housing market and the impact that price falls are having on household confidence, consumer spending and economic growth, this release may be watched closely by the market and the Aussie could be at risk of weakening if the number is particularly poor.

The main driver of the Pound in the week ahead is likely to be political uncertainty.

It will probably trade with a downside bias as a result of rumours the next leader of the Conservative party - in all probability Boris Johnson - will face little choice but to call a snap General Election before 2019 is out if he is to have any chance of passing a negotiated Brexit deal through parliament.

Expectations for the Conservative's wafer-thin majority to be overturned in the event Johnson tries to lead the UK into a 'no deal' exit from the EU would leave the fresh Prime Minister with little choice but hope that the country will back him in another vote.

However, General Elections usually result in more political uncertainty and weaken the Pound, so the outlook is overall bearish from a fundamental point of view.

We will be watching for further developments on this front over coming days, while keeping an ear on Johnson's campaign for suggestions as to how he might deliver Brexit.

The main economic driver is GDP data for May, which is expected to show a rebound of 0.3% after a negative growth rate in April.

UK economic growth is a key driver of the Pound as it influences capital inflows and a worse-than-expected result could impact negatively on the already vulnerable Pound.

“The economy probably underperformed its European partners in the second quarter as the Brexit extension has only prolonged the period of uncertainty for British businesses. UK GDP shrank by 0.4% month-on-month in April and data due on Wednesday is forecast to show GDP recovering by 0.3% in May,” says Raffi Boyadijian, an economist at XM.com.

The other main data releases for Sterling are industrial and manufacturing production in May, which are likely to show positive recoveries as April’s stats were kept ‘artificially’ low due to one-off factors.

“Both industrial and manufacturing output also slumped in April as firms sought to run down the large stockpiles they built in the prior month. In May, they’re expected to have rebounded by 1.5% and 2.5% m/m, respectively.”

All the major data releases are scheduled for release on Wednesday, July 10 and 9.30 BST.