The Pound-to-Yen exchange rate could rally ahead of other Sterling pairs in the coming weeks and months if a recovery of the British currency coincides with resilience in American bonds yields or any other factor that prevents the Japanese unit itself from strengthening against the U.S. Dollar.

Pound Sterling was an outperformer last week and sat around the middle of the major currency rankings for 2021 on Tuesday after Bank of England (BoE) Governor Andrew Bailey's appeared to pour cold water over the previously-popular idea that negative interest rates could've been becoming a likelihood.

Bailey's remarks catalysed a rally that had failed to materialise earlier when the House of Commons nodded through Prime Minister Boris Johnson's agreement covering trade in goods and other aspects of the relationship with the EU, and one which has since been bolstered by Britain's success in rolling out coronavirus vaccines.

"GBP/USD pushed over 1.36. We see the risk GBP/USD trades closer to 1.4000 over the next few months because GBP/USD is undervalued," says Joseph Capurso, a senior FX strategist at Commonwealth Bank of Australia. "USD/JPY returned above 104.0, in contrast to USD weakness elsewhere."

The government's vaccination strategy could see the UK among the first to achieve herd immunity, thus affording a headstart to the economy in its recovery from 'lockdown' that also ensared much of Europe and also increasing parts of Asia early in the New Year. 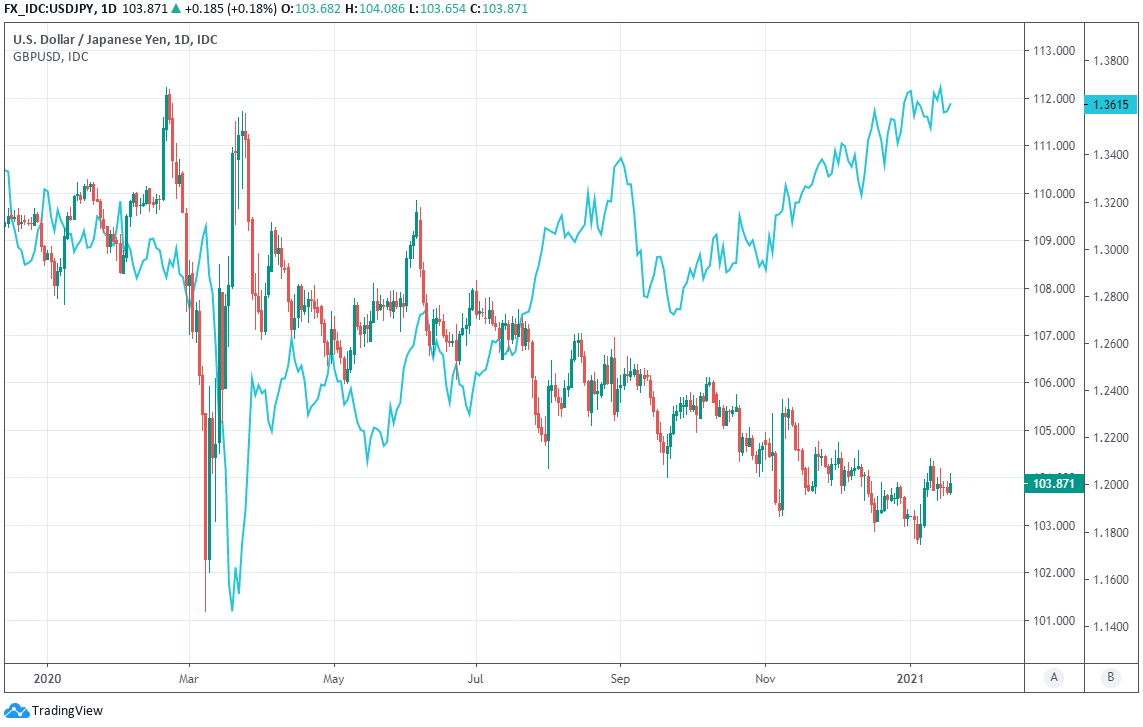 This, along with fading risks related to the trade relationship with Europe, is a positive fundamental development that could further bolster British bond yields and potentially draw in Japanese investors who bought their largest amount of UK government bonds in November 2020 since the financial crisis.

November's surge in Japanese bids for British bonds coincided with a sharp increase in UK yields as well as a rally in GBP/JPY. But Sterling could gain further this quarter and thereafter if the Yen continues its nascent underperformance and CBA is right about GBP/USD reaching 1.40.

"The JPY had a poor start to the year, being highly vulnerable to the abrupt spike in US Treasury yields due to its low-yielding nature and a well-established historical correlation. The situation may also be exacerbated by speculative market positioning that was skewed to being long JPY as of late 2020," says Joey Chew, a strategist at HSBC. "We forecast USD-JPY to fall from 104 in 1Q to 102 by end-2021, although we acknowledge that the risks are to the upside." 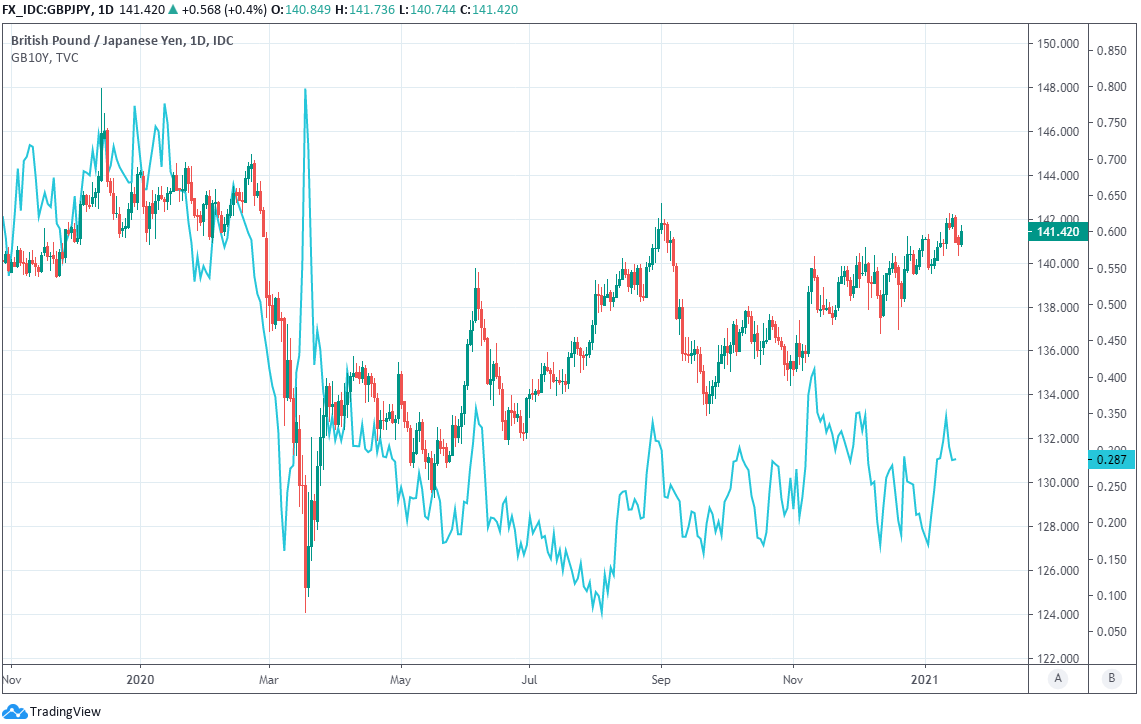 Many analysts do however still expect USD/JPY to decline in the months ahead, which would constrain GBP/JPY if-not engender losses. Japan's Yen is widely expected to strengthen against the all-important U.S. Dollar this year although a January surge in American bond yields has led USD/JPY to rise by 1% thus far in 2021.

This has helped lift GBP/JPY, which is determined by relative price action in USD/JPY and GBP/USD. The outlook for the Yen is hinged on the trajectory of U.S. bond yields and monetary policy at the Bank of Japan (BoJ), which will announce its latest decision at an unscheduled time in the early hours of Thursday morning. Consensus is that BoJ policymakers will leave their main interest rate and yield-curve-control policy unchanged this week ahead of the March conclusion of a review into those policies, which was announced at its last meeting in November.

"For now, the BoJ will want to promote an image of a Bank focussed on policy stimulus.  Over 60% of the economy is now in a state of emergency due to an increase in Covid cases and any divergence from the accommodative paths set by the ECB and the Fed could result in an unwanted appreciation of the JPY," says Jane Foley, a senior FX strategist at Rabobank. "We currently expect USD/JPY to trade mostly in the 103/104 range in the months ahead." 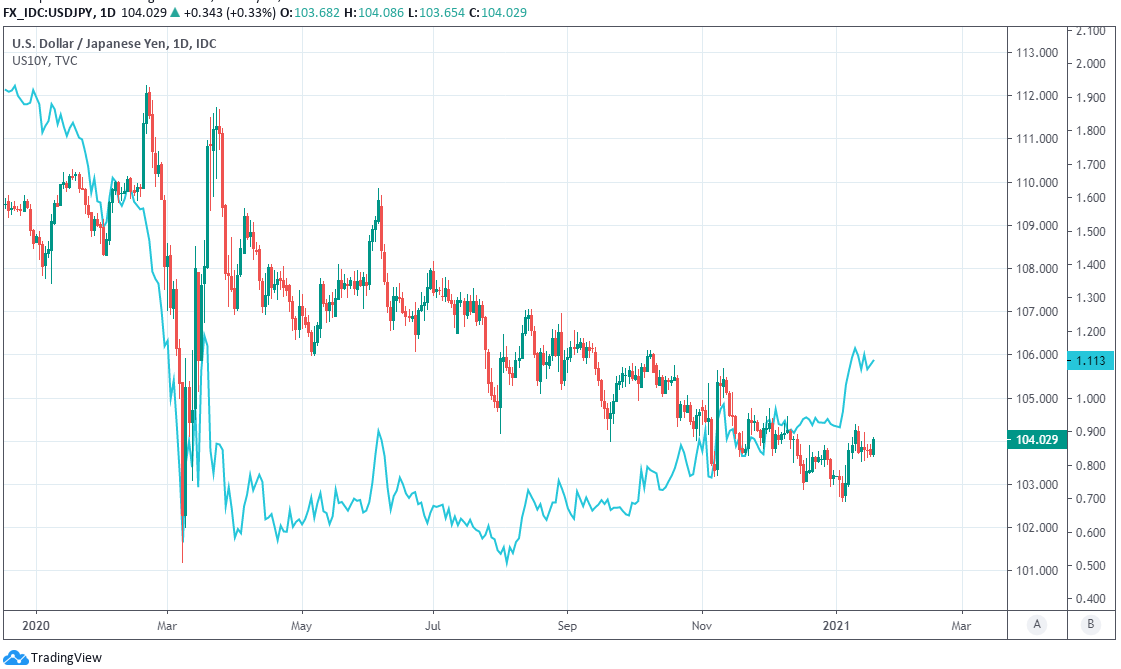 This week's meeting could be a neutral affair for the Yen but American bond yields may otherwise keep propping up USD/JPY while providing indirect support to GBP/JPY.

Dollar-Yen has the strongest correlation of all U.S. exchange rates to movements in the 10-year U.S. government yield so could draw support from any further increases.

American yields may yet rise further if the new administration headed by President Elect Joe Biden, who's inaugurated on Wednesday, succeeds in finding a Congressional majority in favour of the $1.9 trillion spending package announced last week.

However, many analysts have observed that this relationship has weakened over time and are for now at least continuing to forecast a stronger Yen for 2021. A lower USD/JPY rate would eventually be a headwind for GBP/JPY in the absence of an all-out outperformance by the Pound.

"We continue to be positioned for a global recovery, but an earlier-than-expected focus on US yields led us to reduce USD exposure in the recommended portfolio. In G10, we unwound short USD/JPY given it sensitivity to US yields," says Meera Chandan, a strategist at J.P. Morgan, who forecasts a year-end USD/JPY rate of 98 and a GBP/JPY fall from 141 to 130. "While the eventual magnitude is debatable, the focus is now squarely on the substantial fiscal stimulus that Biden will be able to deliver and the consequent US exceptionalism/ increase in US yields that could unleash."