- Downtrend to continue over medium-term

GBP/JPY is trading at around 137.61 at the time of writing, down slightly at the start of the week and studies of the charts suggest the exchange rate is set to continue its broader downtrend in the days to come.

The 4-hour chart shows how the pair has pulled back higher against the overall downtrend in recent days, in what looks like an abc correction. These are quite common in downtrends and once complete prices usually resume their downtrend. The pair, therefore, will probably continue down to the recent 136.61 lows in the coming days. 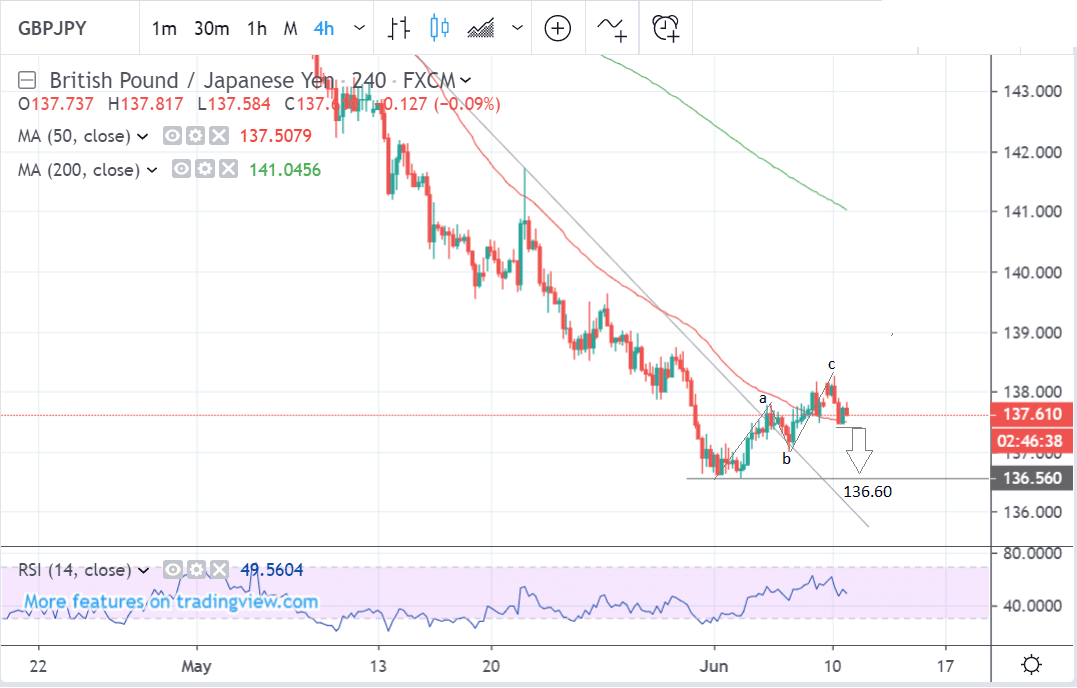 We use the 4-hour chart to give us an indication of the short-term outlook which includes the week ahead.

Taking a step back, the daily chart clearly shows the strong downtrend in May. This bear trend is probably still intact. The recent recovery during the last week was not strong enough to indicate a change in trend. The five up days in a row failed to claw back as much ground as the one preceding, long, red, down day. This alone is a negative sign and suggests the pair is merely correcting back and not changing trend. 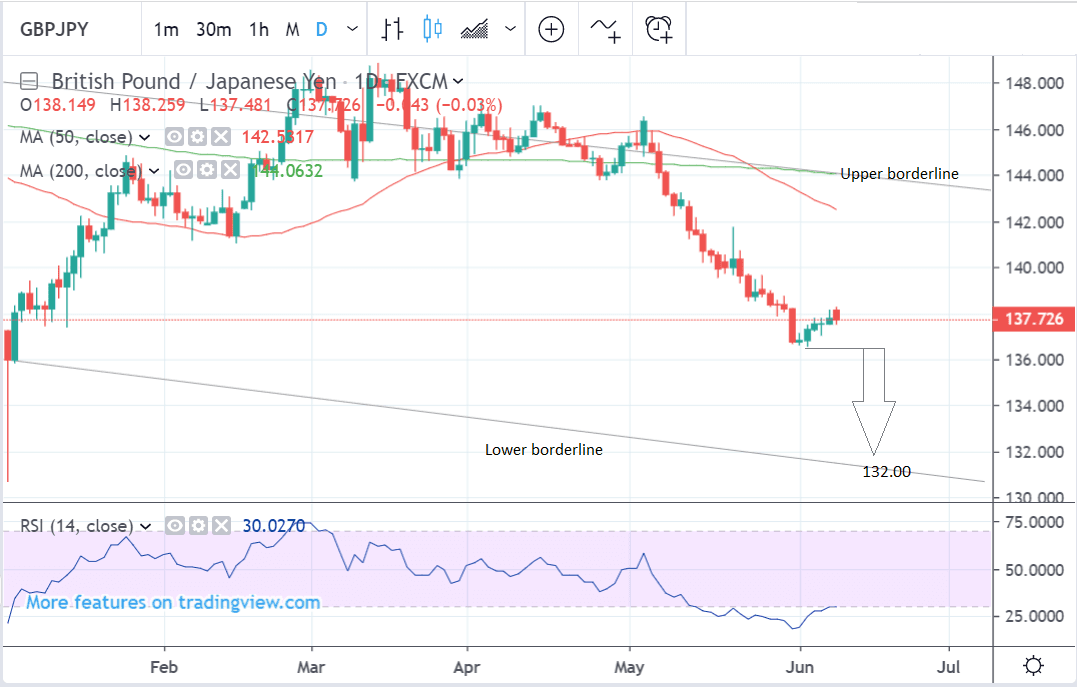 Given the old adage that ‘the trend is your friend’ there is no indication of the downtrend reversing - especially not given today’s weakness.

The RSI momentum indicator may have risen above 30 and out of the oversold zone, which is a buy signal, but this alone is not enough to indicate a change of trend either.

The outlook in the medium-term, therefore, is for the pair to continue to fall, possibly quite rapidly, to a downside target at 132.00.

We use the daily chart to give us an indication of the medium-term outlook which includes the next couple of weeks to a month.

The weekly chart indicates that once the pair has reached the lower borderline of a large wedge pattern which has encompassed activity since the beginning of 2018, it will probably stall and although it could go even lower, down to 130.00 it is likely to bounce off the lower borderline and then perhaps continue the trend down. 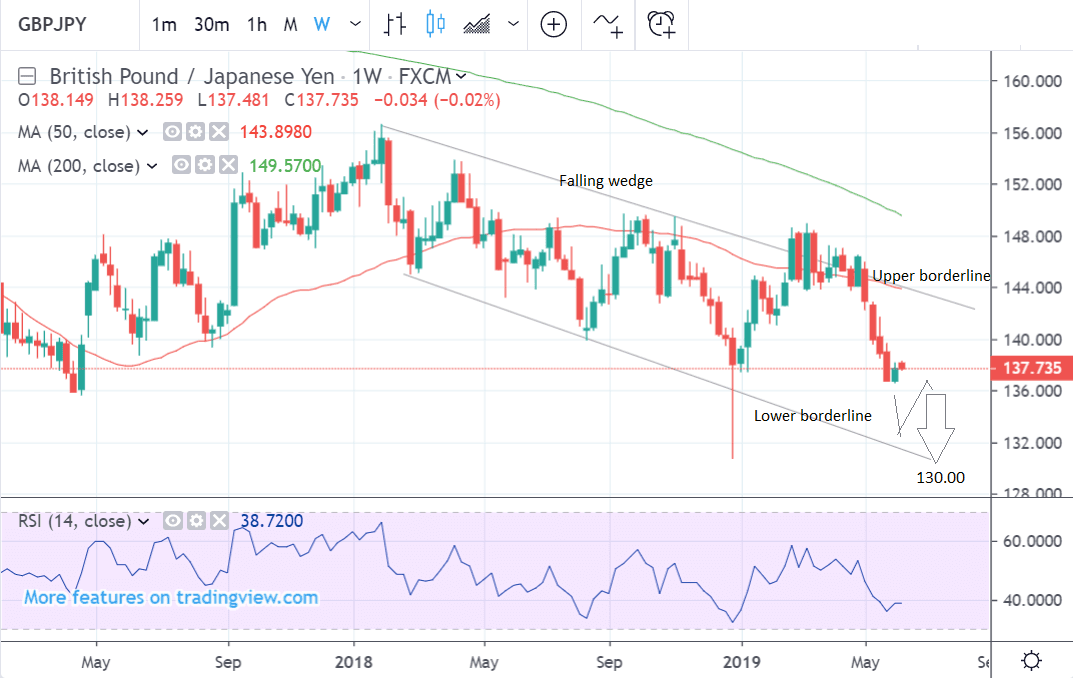 There appears to exist a risk of a surge in the long-term and a breakout from the top of the falling wedge, which is, after all, a bullish price pattern.

A break below the 2017 lows, confirmed by a move below 136.00 or a close below 136.50 would probably confirm an extension lower, down to an eventual target at the base of the descending wedge pattern, at 130.00.

The Yen had been doing comparatively well out of the recent escalation in the trade conflict between the U.S. and its trading neighbours.

On Monday, however, trade tensions eased after President Trump decided against raising tariffs on Mexican imports. His change of heart eased fears about slowing global growth and the Yen suffered as a consequence.

General risk sentiment further eased after Chinese data showed a much higher-than-expected rise in the trade surplus, resulting from a -8.5% slump in imports and a 1.1% rise in exports. The overall surplus rose from $14bn to $42bn, when only a $21bn rise had been forecast.

Overall, however, the relationship between U.S - China is unlikely to improve.

The U.S. sees China as a geopolitical threat and its crack down on Huawei is partly due to maintaining national security as much as the protection of intellectual property, or trade; all of which appear to be interrelated.

Given these security concerns trade tensions are likely to get worse not better because it is not just a question of trade, but also of power when it comes to the two main superpowers.

All these factors mean the Yen is likely to be supported for the foreseeable future.

Domestic date rarely moves the Yen even when it is important. Monday saw some major releases including the current account and GDP.

The current account fell to 1.7bn Yen (although not as low as the 1.5bn expected) and GDP rose 2.2% compared to a year ago and 0.6% in Q1 compared to the previous quarter.