- High chance of a bounce at that level

The Pound-to-Yen exchange rate is trading at around 136.90 at the time of writing, a tenth of a percent higher on the week, but studies of the charts suggest the exchange rate is set to continue its broader downtrend in the days ahead.

The 4 hour chart shows the pair in a steep downtrend ever since the start of May and given the old adage that “the trend is your friend” this confirmed downtrend is expected to continue. We use the 4 hour chart to give us an indication of the short-term outlook which includes the coming week. 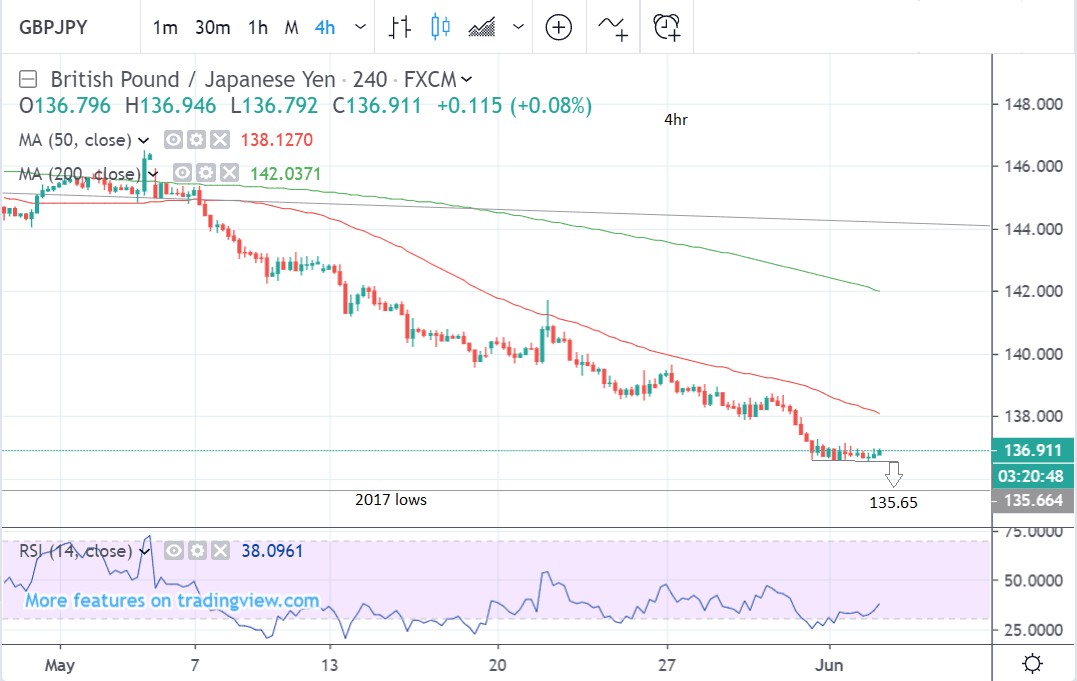 The pair has been consolidating in a narrow sideways range since the start of the new trading week but it will probably break lower in the next few days, to a target at the 2017 lows at 135.65, with confirmation of the move coming from a break below the 136.55 lows. 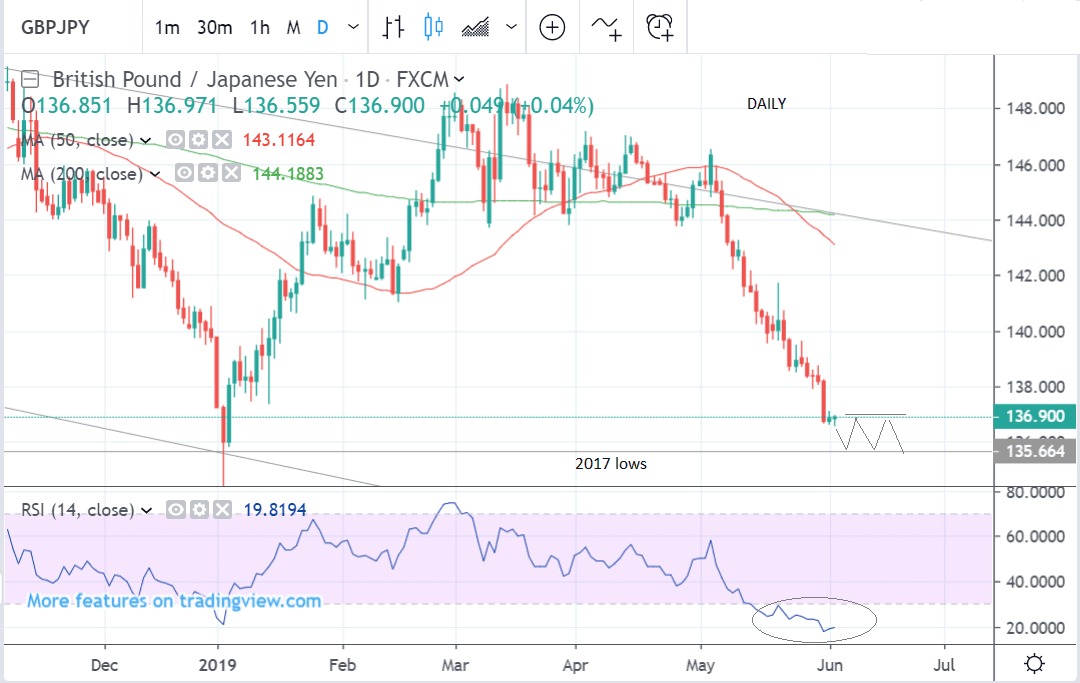 The daily chart tells a similar story - the pair is in an established downtrend which is likely to continue lower. We use the daily chart to give us an indication of the medium-term outlook which includes the next couple of weeks to a month.

The difference is that the RSI momentum indicator is deeply in the oversold zone, which is below 30, and this means the downtrend could be at risk of stalling.

The outlook in the medium term, therefore, is for the pair to fall to the floor of the 2017 lows and then probably go sideways for a few weeks whilst momentum recovers from its oversold extremes. 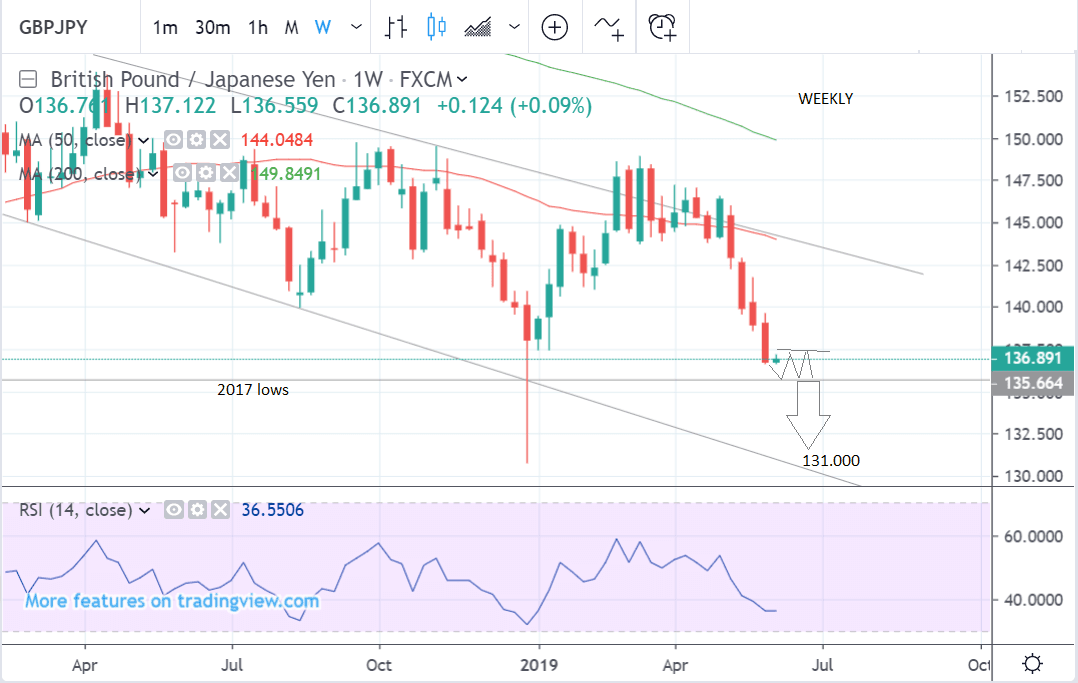 A break below the 2017 lows, confirmed by a move below 136.00 or a close below 136.50 would probably confirm an extension lower, down to an eventual target at the base of the descending wedge pattern, at 131.00. This could happen over a 3-9 week period.

The main driver of the Yen appears to be global investor risk appetite which is fast deteriorating on the economic impact of trade war escalation fears.

The Yen is a safe-haven currency which means it benefits from inflows during times of crisis - much like gold. The Yen has been doing comparatively well out of the recent escalation in the conflict between U.S. and its trading partners. This probably explains the relatively steep downtrend in GBP/JPY during May.

The U.S.-lead trade war between expanded last week when the U.S. put Mexico in its sights, looking to use trade as leverage over its southern neighbour to stem illegal immigration. The U.S. Dollar has meanwhile fallen during the course of this time, suggesting the world's number 1 currency is not considered a 'safe haven' in this environment.

"The most likely argument is that the movements seen since the middle of last week have been related to deteriorating risk sentiment," says Simon Derrick, Chief Currency Strategist with BNY Mellon. "This is certainly consistent with the increased bid for not just the JPY, but also the CHF and gold since Wednesday, along with the USD’s rather more uninspiring performance over the same period.

The U.S.-China trade stand-off meanwhile rumbles on, ensuring the risk-averse atmosphere that favours the Yen could be with us for some time yet.

Recently the U.S. blacklisted Huawei due to national security concerns and over the weekend China retaliated by starting an investigation into U.S. logistics giant Fedex which will probably result in a tit-for-tat bar of Fedex in China.

The Chinese have also threatened to cut off exports of rare earth metals to the U.S. which are used in a host of applications including cell-phones, televisions, audio systems, solar panels, satellites, and lasers.

China supplies over 80% of rare earth metals imported by the U.S. so such a trade ban could really hit the U.S’s ability to produce many widely used tech components, at least in the short-term.

But one reason why the Chinese have not gone ahead is that such a ban would increase the price of rare earth metals loosening China’s stranglehold on the market and making it feasible for new mines to open in other parts of the world rich in rare earth metals such as Africa and Asia.

The U.S. stock market’s steep decline in May has reflected the new more pessimistic outlook for the global economy.

The fall in U.S. Treasury bond yields is a sign investors are taking flight into ‘’safer’ bonds and leaving equities. This could be a sign they fear a recession coming.

On the domestic data front, there is little of importance from the Yen’s perspective. Bank of Japan’s (BOJ) Kuroda is speaking on Thursday at 09.25 BST and Saturday, June 7 at 07.20.

His comments are unlikely to reflect a change in monetary policy stance with the usual mantra of “moderate” growth and “subdued” inflation likely to be reiterated. Where his comments may be interesting is in the assessment of the impact of the trade war.

Household spending is the only other key release because it is reflective of inflation. It is expected to show a -0.3% fall month-on-month in April and a 2.6% rise compared to a year ago. If it undershoots it might be detrimental to the Yen and vice versa if it rises.