- This is the chart "doing the rounds at the Fed"

- Shows potential for a structural upshit in US inflation

- Dollar will probably rise in short-term as Fed expectations recalibrate

President Trump's decision to slap import tariffs on another $200bn of Chinese goods will start to increase shop prices and the cost of living for everyday Americans by rolling back years of advances in affordability brought about by globalisation and free trade.

Whilst this isn't news to many, what has perhaps not been so widely appreciated is the extent to which prices may rise and the knock-on effect this will have on US interest rates and the value of the Dollar. 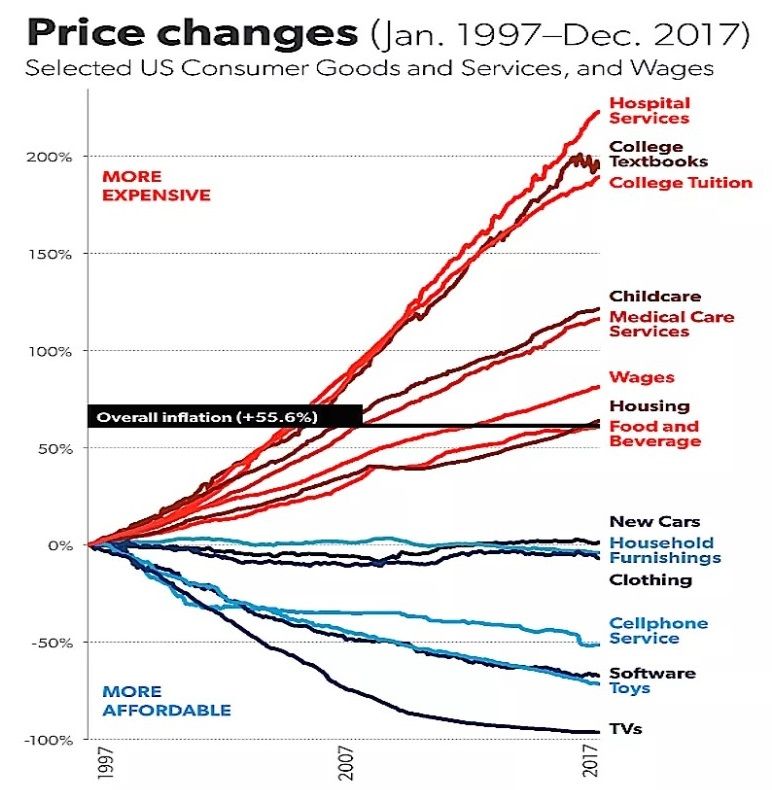 The chart above is presented by Mark J. Perry at the American Enterprise Institute (AEI) and shows the sustained decline in prices, or increase in affordability, of tradable goods.

An obvious takeway is the massive difference in trends between non-tradables like tuition fees and child care, which have surged in price over the period and tradable goods like TV's, toys and software which have actually declined in price, showing a deflationary trend.

Non-tradables are subject to 'state capture' and are therefore not prone to the cost benefits of globalisation and trade liberalisation.

Goods such as TVs, software, toys, cars, clothing etc. have meanwhile fallen significantly in price since 1997 as they are those parts of the inflation basket that are subject to global trade and the benefits of competition.

It is the efficiency that drives cheaper prices and raises the standard of living for US consumers that is actually most at risk of a trade war. 'Walking-back' circa 20 years of globalisation and free trade will reduce global competition leading to higher prices - as without the threat of Asian manufacturers producing goods for a fraction of the price US manufacturers can produce them at, prices will rise, increasing inflation all around.

"If Donald Trump succeeds in upending the global trade order, he could end up reversing the dynamics that have driven down the cost of tradeable goods for decades," says a note from economics blog The Heisenberg Report, commenting on the chart.

A global trade war will therefore reverse the disinflationary impact of decades of globalisation both in the US and potentially other developing market countries, with the effect that it will further exacerbate the inflationary surge already caused by the inclusion of tariffs.

The effect will be to add a further anti-globalisation premium onto inflation, potentially supercharging the rise already caused by tariffs.

Importantly, the shift higher in inflation could well be a structural shift higher taking the economy out of multi-year environment of benign inflation.

By extension, central banks will have to act by raising interest rates, which in turn could weigh on economic activity, and push higher the value of the Dollar.

Implications for the Dollar

The implications for the Dollar are complex but ostensibly bullish.

The potential fallout for the US is already a concern for policymakers, according to a report from Bloomberg News, which says the Perry chart has been "doing the rounds at the Fed" and raising eyebrows in the process.

The Federal Reserve sets interest rates in the US, the main weapon to subdue inflation, so a sudden shock rise in prices from the trade conflict would lead the Fed to react by raising interest rates.

The fear for some economists is the Fed will be taken by surprise and wrong-footed when prices suddenly spike, and this will lead to 'stagflation', however, assuming a reaction concomitant with price rises, interest rates are likely to surge well above their current 1.75-2.00% level, and the 3.5% estimated terminal rate.

This has serious implications for the Dollar.

Currencies almost always rise when central banks put up interest rates, so the Dollar's initial reaction to expectations of higher rates would be to rise too. The reason for this is that higher rates attract greater inflows of foreign capital, drawn by the promise of higher returns.

Yet another view might argue for a more subdued reaction from the Dollar. Higher interest rates will also stymie growth by increasing borrowing costs and this could act as a drag on the Dollar by reducing inbound investment.

Gabriela Santos, a cross-asset strategist at JP Morgan, recently said that she expected the Dollar to weaken in the medium-term as US growth peaks and higher interest rates start to "bite".

Currently, growth is strong as the US enjoys the "sugar high" from Trump's tax reforms, however, when this subsides in about 12 months time she estimates roughly, the economy will begin to slow down. The Dollar is forecast to fall as a result of the expected slowdown in the economy before it actually happens as markets price in the rumour before the fact.

Santos further notes that growth differentials are now more of a driver  Dollar than the Fed, which suggests a surge in inflation expectations may not impact on the Dollar as much as previously. It is also a well-known phenomenon that as interest rates rise beyond the first hikes, their impact on the host currency thereafter steadily declines.

Assuming inflation gets super-charged by Trump's trade policy, however, the rise in interest rates could bite more quickly causing growth to slow more rapidly, as consumer spending suddenly slows in reaction to the rise in prices. Obviously, wages will follow inflation higher but there may be a delay. The missing link is growth, and how that will be affected, though higher interest rates are normally the harbinger of recessions.

But if there is a saving grace for the US economy it is that it has a large domestic market so it could be better insulated from the worst fallout of global trade wars compared to other more export-dependent countries.

In the absence of a crystal ball, however, what is probably increasingly likely from a currency perspective, is that in the short-term the Dollar will very probably rise or at the very least hold its own, as interest rate expectations adjust higher from the 'trade war' effect.