- US Dollar's rally lacks foundation and is unlikely to last

GBP/USD could be at the bottom of a major trough low which will bottom out soon and see the pair rising up to a new multi-year high above 1.50 by the end of Q4 shows new analysis from the foreign exchange strategy desk at ING Bank.

Analysts find the U.S. Dollar's ongoing dominance in global currency markets might be a temporary aberration - a corrective phase in a bearish longer-term outlook - for the currency.

The rally in the U.S. Dollar has ostensibly been driven by a "trifecta" of factors which won't last, says Chris Turner, global head of strategy at ING.

These include an outperformance in US economic data, rising interest rate expectations in the US versus the 'Rest of the World' (RoW) and negative-bets on the Dollar having reached an extreme.

Yet none of these factors are expected to last.

The comparably better US data is mainly due to soft Q1 growth in RoW, however, this is mainly due to poor weather, the timing of Easter and other one-off factors in Q1 which won't influence Q2, and, also because the former pace of growth in RoW was so steep it was unsustainable and the current pull-back is part of a natural normalisation. 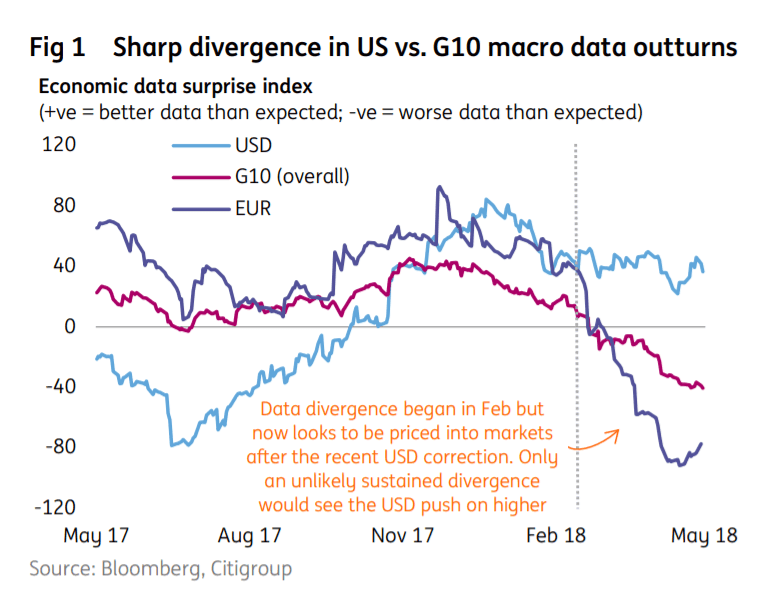 Diverging interest rate expectations, which have pushed US 10 year Treasury bond yields - a reflection of inflation compensation for 10-year lenders - above 3.0%, are overrated and unlikely to endure as a factor in US Dollar appreciation.

ING's Turner argues higher interest rate expectations in the US are a fickle factor in Dollar strength and therefore unreliable in the longer-term. For example, only about 30% of the move down in EUR/USD from its April peak can be put down to higher US interest rates expectations. In addition, research shows that after the start of the up cycle in a country's interest rates the rise has a diminishing impact on the strength of the currency. The US is now in the middle of its up-cycle in rates and so the effect will steadily wear off from here on in. 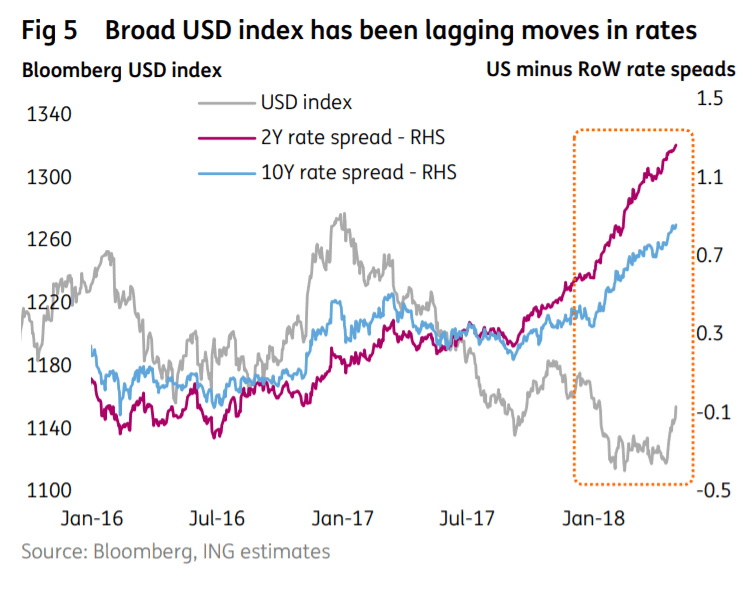 The theory behind higher interest rates is that they attract more foreign capital inflows which raises demand for the host currency which thus appreciates.

Finally, the Dollar has rallied as a result of a backlash after negative bets against the currency reaching a lop-sided extreme. In trader's talk, this is commonly known as a 'short-squeeze'. What usually happens is that the asset in question bottoms and then starts to recover, and as it recovers those betting it would go down further start to close their bets, further driving up the recovery with increased demand, and as prices rise panic starts to set in and more and more bears start to close out their negative bets, thus further fuelling the recovery.

Once the three factors which have been driving Dolar strength, wear off a major Dollar-negative factor will come to replace them and weaken the currency instead.

This major factor is the US's widening twin deficits which have traditionally been associated with Dollar weakness especially when deepening. The deficits in question are the budget deficit and balance of payments or current account. When both are in red the country needs to borrow copious amounts from abroad so the theory goes, which creates a foreign liability that weighs on currency valuation expectations.

This is especially the case when provided with a "catalyst", says Turner, which in this case could be RoW catching up again.

"Big US budget and current account deficits have historically weighed on the USD (see Figure 10 below) – though we acknowledge that ‘twin deficits’ only become an active issue for currencies when there is a strong enough catalyst. The RoW growth convergence story is one such catalyst; for a US economy in the latter stages of its economic cycle, relative US asset valuations and better goldilocks growth opportunities elsewhere should exert a downward force on the USD," says the strategist.

As for the Pound side of the pair, ING is quite bullish in its outlook for Sterling seeing the currency as woefully undervalued on Brexit risk and likely to rise once the risks eventually dissipate. Their economic outlook is also moderately positive. 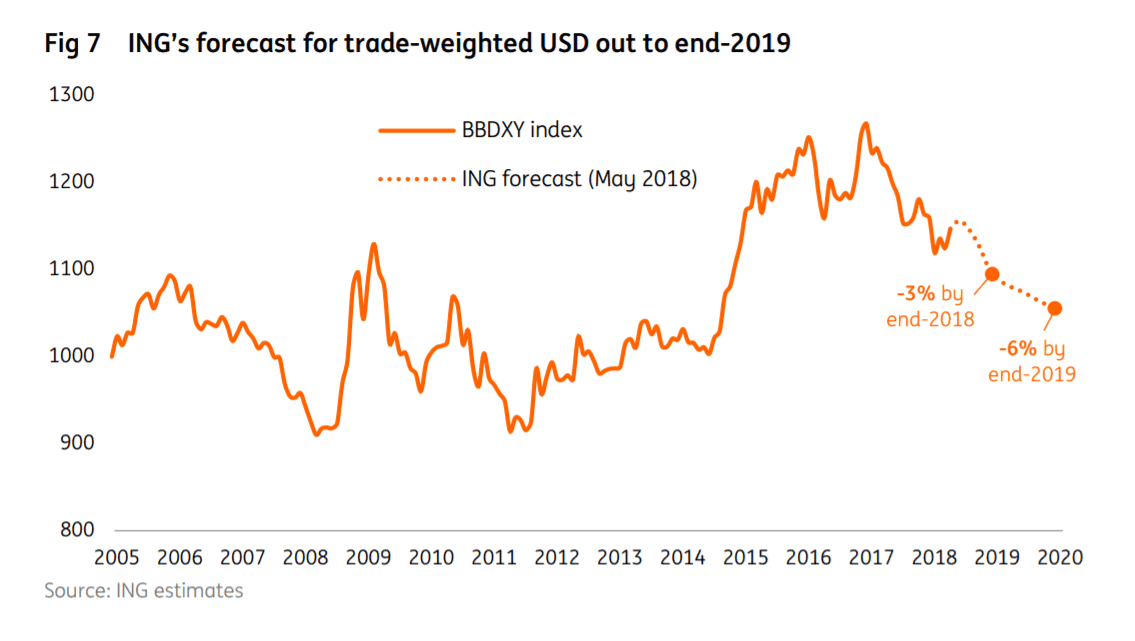