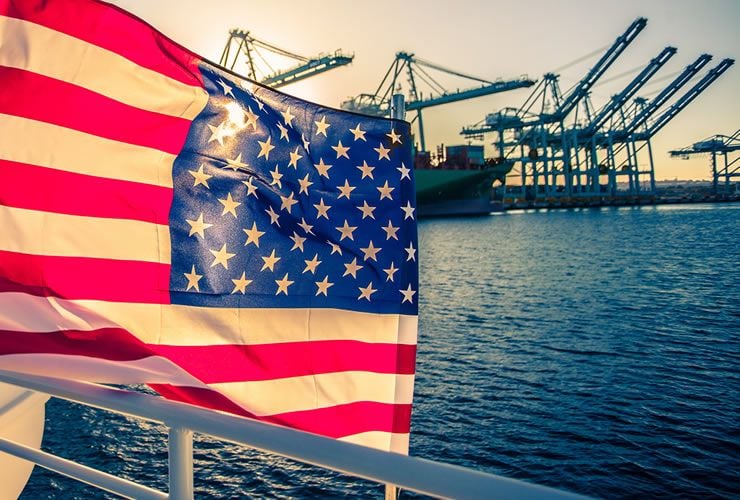 Commentators report the Dollar has suffered following the placement of punitive duties on the imports of metals into the US. But, Sterling appears to have failed to take advantage of the Dollar's woes.

The White House has announced it is set to impose tariffs on steel and aluminium imports for “a long period of time.” There will be a 25% on imported steel and 10% hit on imported aluminium and an official publication will be made next week.

The move has prompted authorities in both China and Canada to threaten retaliation, ensuring the prospect of a global trade war becomes all the more real while the European Union have said they are looking to 'safeguard' import tariffs in response to the US move.

Our Steel and Aluminum industries (and many others) have been decimated by decades of unfair trade and bad policy with countries from around the world. We must not let our country, companies and workers be taken advantage of any longer. We want free, fair and SMART TRADE!

After the plans were first reported on Thursday, March 1, we covered the views of some analysts who believed there could be a short-term boost for the Dollar on the back of the move but warned moves in the Dollar are difficult to call in the current environment where relationships have been flipped on their head.

Indeed, the consensus at the time of writing is that the moves have been negative for the Dollar.

It is hard to prove this though if we consider the multitude of drivers behind the Dollar; for instance were Federal Reserve Chair Powell's remarks to Congress behind the moves?

Analyst Marshall Gittler at ACLS Global thinks he has evidence supporting the view that it is in fact the imposition of import duties that are behind the Dollar's moves. 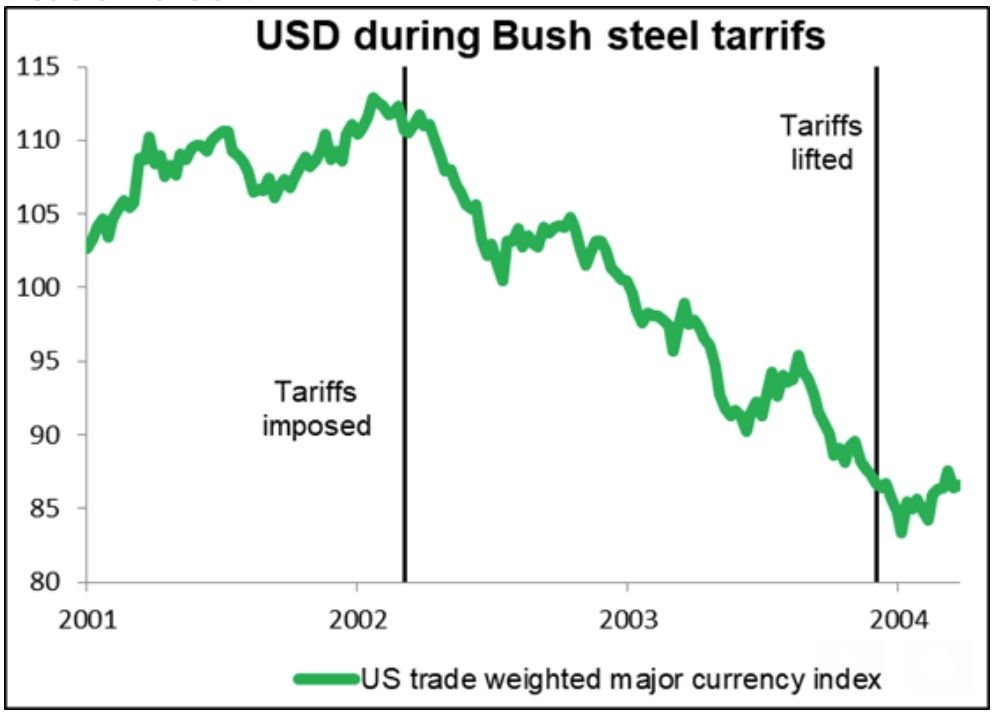 "The FX market reaction should also come as no surprise. I’ve shown this chart before; it’s what happened to USD when Bush tried a similar stunt," says Gittler.

The Dollar pared back some of its recent gains against most major currencies with the EUR/USD recovering to a high of 1.2273, US 10‑year Treasury yields corrected lower to around 2.80% (a two‑week low) and the S&P500 is down 1.3%.

"President Trump’s promise to impose significant tariffs on aluminium and steel imports appears to be the trigger behind those financial market moves," says Elias Haddad, an analyst with CBA in Sydney.

Here is another graph that hints at why protectionism is bad for the Dollar: 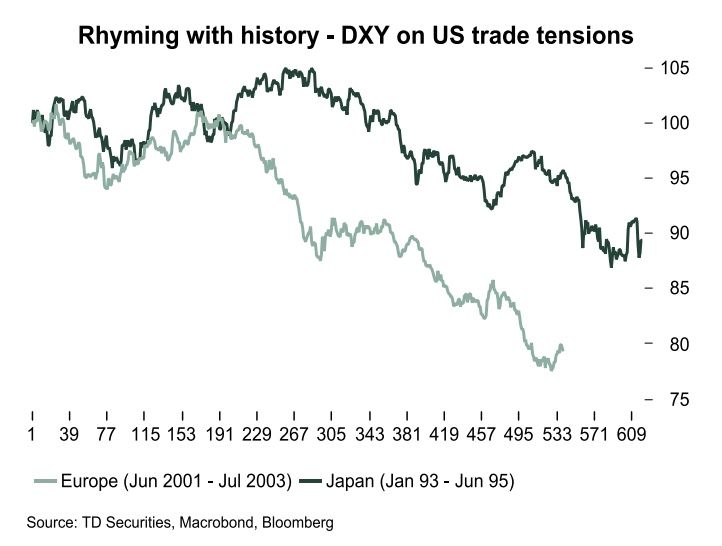 "A pivot towards US protectionism should intensify the unwinding of the USD bull market over the coming years. History may not repeat but is sure to rhyme, primarily when the global macro backdrop offers further headwinds for the Dollar," says Mark McCormick, North American Head of FX Strategy with TD Securities.

Sterling sits this one out

Evidence suggests the Dollar might suffer under the emerging regime of US trade protectionism, and hence it is possible to draw conclusions on March 1's USD underperformance and the tariff announcements.

Yet, the Pound-to-Dollar exchange rate appears to have opted not to take advantage of any Dollar weakness it appears with a consolidation around 1.3759 taking place ahead of the final session of the week.

"Brexit‑related political uncertainty is weighing on GBP," says Haddad who warns the main event for Sterling today will be UK Prime Minister Theresa May's speech on Brexit which will be closely scrutinised at a time when it appears talks are stalling.

The speech is titled "Our Future Partnership" and the Prime Minister will set out what she claims is an ambitious but credible vision for the future.

She will insist the UK and EU have a shared interest in getting this right.

The speech takes place at 1.30pm and any surprises could move Sterling, either higher or lower.

We believe Sterling will suffer should May strike a robust tone that doubles down on her red lines concerning the European Court of Justice and the Irish border question.

However, if the Prime Minister hints at further concessions we reckon the Pound will benefit as it suggests she is willing to give ground in order to try and secure that transitional period agreement at the March 23 European summit.