All the ingredients are there for a US Dollar rally: economic growth, rising interest rates, fiscal stimulus, and yet the Dollar keeps going down, what's the problem?

But for some reason the currency is not reacting to the usual stimuli.

This may be due to a significant sea-change in financial market cycles or the theories that underpin financial analysts' expectations.

Up until now, the dominant theory for explaining movements in foreign exchange markets has been the 'capital flow' model.

This states that in the modern, relatively borderless, financial world, capital moves to where it can earn the most interest.

When inflation rises and central banks put up interest rates, capital flows into a country, increasing demand for that country's currency, which rises in value.

The model has worked pretty well up until recently when it suddenly stopped working in the case of the US Dollar.

US interest rates have gone up quicker than in any other developed country in the last year and are expected to continue rising more rapidly than anywhere else in the next, and yet the Dollar has gone down; the model has stopped working.

Casting around for an alternative, some analysts have argued part of the reason for the Dollar's weakness can be explained by what they call the twin deficit model.

This posits that when a country runs a current account deficit and a budget deficit simultaneously then it is negative for the currency.

Why would this be so? The argument is that if a country is running a budget deficit it means the government is spending more than it gets, usually because it has lowered taxes or increased spending, or probably both, as in the case of the Trump administration.

The end result of a budget deficit, especially when the economy is doing quite well, is that most people having more money in their pockets, which they invariably spend on purchasing foreign imports.

According to mainstream FX theory, the current account is a major driver of currencies, and when it is in deficit the local currency adjusts down to rebalance the deficit, because a weaker currency increases the competitiveness of a country's exports.

"The second Dollar problem is that irrespective of asset valuations the US twin deﬁcit (the sum of the current account and ﬁscal balance) is set to deteriorate dramatically in coming years," says Deutsche Bank Strategist George Saravelos.

"When an economy is stimulated at full employment the only way to absorb domestic demand is higher imports. Under conservative assumptions the US twin deﬁcit is set to deteriorate by well over 3% of GDP over the next two years," he adds.

The Problem With the Twin Deficit Model

Not everyone agrees that the twin deficit model is accurate or that it is responsible for the Dollar's current bout of weakness.

Analysts at RBC Capital Markets, for example, question the validity of the twin deficit model as an explanation for current US Dollar weakness.

For example, they put to the test the theory that a wider current account deficit leads to a weaker currency by developing a buy and sell currency trading strategy based on the deficit model.

After backtesting the strategy over the last 15 years they conclude that it would not have resulted in a profit - in fact quite the opposite - it actually showed an investor in the strategy would have lost money.

"We find no evidence of a long-term tendency for deficit currencies to fall and vice versa. In fact, an investor running such a strategy would have persistently run negative carry (pale blue line), but also lost money on the spot positions (dark blue line)," says RBC analyst Adam Cole. 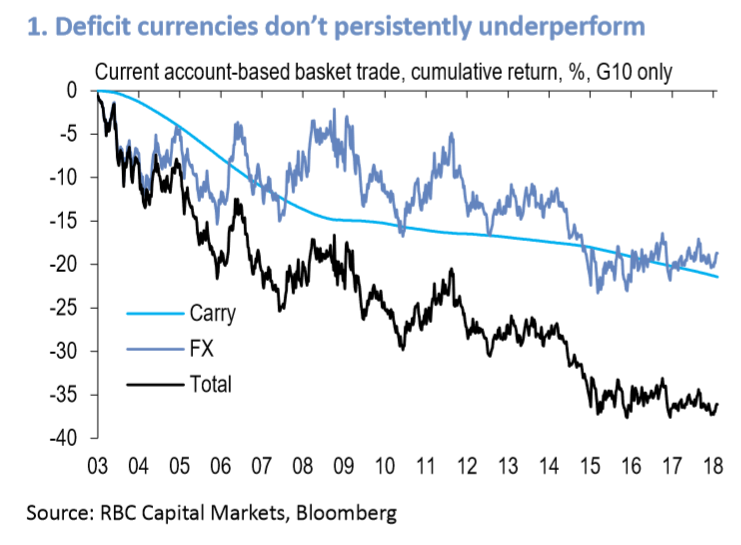 One reason why a simplistic approach to interpreting the current account and its impact on FX may not work is that there are probably other factors which are necessary ingredients to result in a significant impact.

The International Monetary Fund (IMF), for example, has developed a checklist of qualifications for a current account deficit to result in a "forced" adjustment, which is another way of saying a forced currency devaluation.

In the case of the Dollar at the moment not all the above apply, for example, the Dollar is not overvalued, inadequate FX reserves do not apply since USD is the world reserve currency and partner countries are not experiencing lower growth.

"On most of these criteria, USD looks less vulnerable than it did in the early-2000s. On the IMF’s broad real effective exchange rate index, USD is very close to its long-run average. In 2002, it peaked at 20% above its average.

"Reserve adequacy is probably less relevant for USD as a reserve currency. Credit growth has been far weaker in this upturn, which of course is one of the reasons that the domestic private sector remains in good financial health, as noted above," comments Cole.

A further reason why Cole does not think the twin deficit model fits the current situation is that of a third ingredient which he says is missing and was present during the last comparable twin deficit period just after 2002, and that ingredient is a private domestic deficit.

Just after 2002, not just the government was in hock but households and businesses were too - today the same is not true, overall the private sector is in surplus.

According to Cole, this is a significant difference between the two periods.

"This is key to why we think the current conjuncture is different to the early-2000s. For much of that period, the US did not just run twin deficits; it ran deficit triplets. The current account deficit was the counterpart to domestic deficits in both the public and private sectors and this was key to how the external deficit got to be so big," says Cole.

Whilst a deficit means the country relies on outside financing and this leaves its currency weaker in the long-term from higher debt repayments, there is a long lag before it has to repay the principle, so in the short-term, the flows are actually inbound and currency positive.

In the case of a private sector surplus, moreover, there tends to be more spare cash to spend on foreign imports, which actually puts downwards pressure on the currency, as argued by Deutsche's Saravelos.

Another major difference between now and 2002, is that in 2002 interest rates started falling from 6.0%. Now they are rising.

Who is to say that falling interest rates post 2002 were the real reason for the Dollar's weakness during that period, not twin or triple deficits?

What is Causing Dollar Weakness?

If twin deficits are not to blame for US Dollar weakness, what then could be?

Falling demand for US financial assets is a major reason, according to Saravelos, who puts the blame down to overvalued stocks and shares and a bond market in decline.

"US asset valuations are extremely stretched. As we argued in our 2018 FX outlook a combined measure of P/E ratios for equities and term premia for bonds is at its highest levels since the 1960s. Simply put, US bond and equity prices cannot continue going up at the same time. This correlation breakdown is structurally bearish for the dollar because it inhibits sustained inﬂows into US bond and equity markets," says Saravelos.

This also explains why the outsized rise in US interest rates is no longer driving Dollar strengthening - the rise is leading to a fall in the bond and stock markets which is lowering inflows from foreign investors wishing to buy into them, offsetting capital flows attracted by higher carry.

Another major problem is that the US Dollar is being hit by outflows from the US into the 'rest of the world' (RoW) because of accelerating global growth which has increased the attractiveness of RoW.

This is particularly bad for the Dollar because it is the world's reserve currency, which means its the fallback option when local currencies devalue. Yet because the opposite is happening the flow is the other way, out of USD into RoW, at least according to Morgan Stanley strategist Hans Redeker.

The global growth story is further whacking demand in the US bond market since US treasuries are a goto safe-haven for international investors so global growth hampers demand.

The legacy of quantitative easing (QE) may also be impacting negatively on the USD demand, according to Morgan Stanley's Redeker.

The argument seems to be that due to the side effects of QE international private funds have changed the composition of their portfolios increasingly loading up on higher risk credit indtruments.

Due to central banks buying up most of the sovereign debt issuance under QE, private funds had to diversify into purchasing higher-risk debt, such as corporate bonds.

The upshot is that their portfolios are now more sensitive to changes in interest rates thasn they would have been had they been composed of soveriegn bonds.

Instead of holding the bonds to maturity as the would have in the past they are more readily letting go of the higher risk debt they now own most of which is Dollar denominated.

This explains why the rise in US interest rates is not benefiting the Dollar - it is leading to a sell-off in higher risk debt which is priced in Dollars.

"QE has changed the structure of international portfolios, leading to greater exposures by investors to credit risk. This greater exposure to risk has made investors more sensitive to mark-to market losses from rising yields, which is consistent with the noticeable divergence between USDJPY and yield differentials," says Redeker.