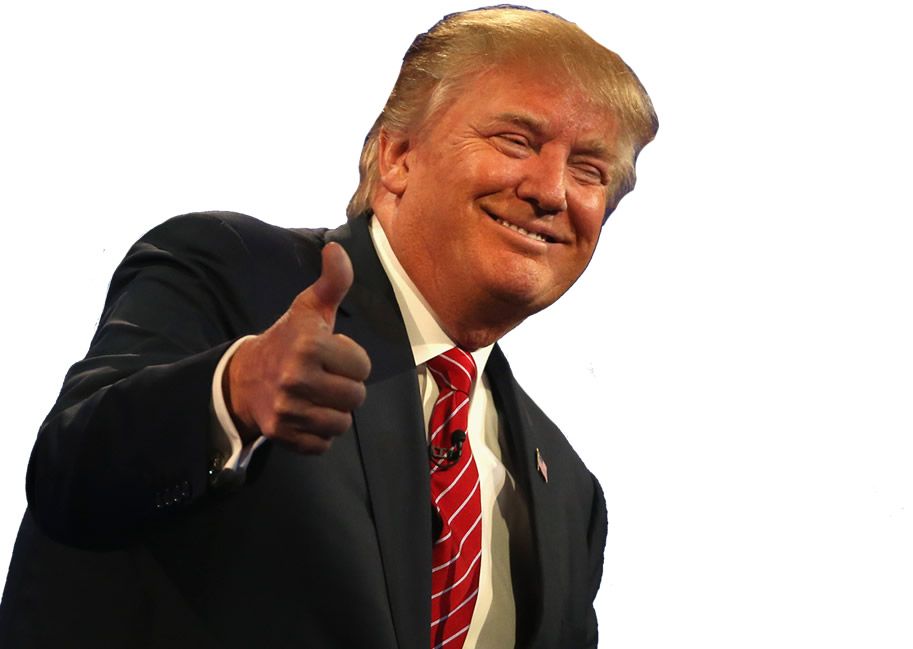 The Dollar fell following the approval of President Trump's tax-reform package, the opposite reaction to what many had expected. Are investors being too negative?

The "big, beautiful Christmas gift" of lower taxes has all but arrived in America and should reach Donald Trump's (Santa?) desk by Christmas. Great right?

Well, not according to financial markets, which gave the imminent passing of the bill a huge thumbs down on Tuesday. For all of the recent buzz around tax-cuts, the market reaction may be puzzling for some.

The tax 'reforms' include a sizeable cut in corporation tax, from 35% to 21%, in addition to reductions in individual tax rates.

The company tax cuts will be positive for corporate America’s bottom line and on top of this, individual tax cuts will leave consumers with more money in their pockets - more people will be able to afford a new Apple iPhone.

For the Dollar, the tax reform bill was expected to lead to greater strength, for two reasons, the first being faster economic growth and the second “repatriation flows”.

Faster growth leads to higher inflation (normally) and higher interest rates, which are good for currencies because they attract greater inflows of capital from foreign investors who are drawn by the promise of higher returns.

Repatriation flows were expected to boost the Dollar as American companies bring offshore profits back to the states in order to benefit from new special tax rates.

Estimates abound of trillions squirrelled away by multinationals abroad, to avoid US tax, and these backflows were expected to push up the Dollar like they did in 2005 when then-President George Bush gave multinationals a tax-free holiday to return money to the US.

Yet the reaction of financial markets Wednesday was unexpectedly negative. The S&P 500 stuttered, the Dow Jones declined and the US Dollar drifted lower while the bill is all but signed. What's wrong?

The main reason for the lack of upside is summed up by the old Wall Street traders exhortation to, "buy the rumour; sell the fact".

Some events are so well signposted before they happen that by the time they do happen, the good news is already priced in and there is little for traders to do but take profits off the table.

Despite a rather rocky path to fruition Trump's tax cuts do fit the description of a 'sell the fact' phenomenon, but there may be more afoot here as well.

You would think the tax cuts, which will pump billions into the economy, would budge inflation expectations at least a little higher? Well this doesn't appear to be the case.

Although US Treasury Bond yields (a proxy for inflation expectations) rose in response to the news, markets have been pretty sanguine about the impact the cuts are likely to have on inflation and bond market trading was later explained away as the effect of traders chasing European yields higher instead.

In general, analysts have long been sceptical of President Trump's tax and infrastructure story, while some have even compared it to Regan's more full-blooded reflationary policies.

"We would also argue comparisons between Trump's reflationary policies are nowhere near those of Ronald Reagan in the mid-1980s, such that the Dollar does not need to see a Reagan-style rally on US tax reform in 2018," says Chris Turner, global head of strategy at ING Group.

With implications for EUR/USD in particular, Turner highlights the difference between the US and the European Union back in the 1980s.

Even the Federal Reserve has been left largely unmoved by the prospect of tax cuts, factoring into its forecasts a minor boost to growth, but still no inflation.

Not Everybody is Negative

Strategists at Nordea Markets say the tax cuts are "suboptimal" and ‘costly' but that risks are tilted to the upside in terms of growth, inflation, and the Dollar.

"We believe the impact should be towards the direction of more policy tightening, giving more credibility to the Fed’s median view of three hikes next year," says Jan von Gerich.

This should reinforce the Federal Reserve's (FOMC) current expectations that it will raise interest rates three times in 2018. Markets have been sceptical about whether it can do this.

Three interest rate hikes would almost certainly see the Dollar pump higher in 2018, but Nordea is one of few voices calling for a faster-Fed as a result of tax cuts. 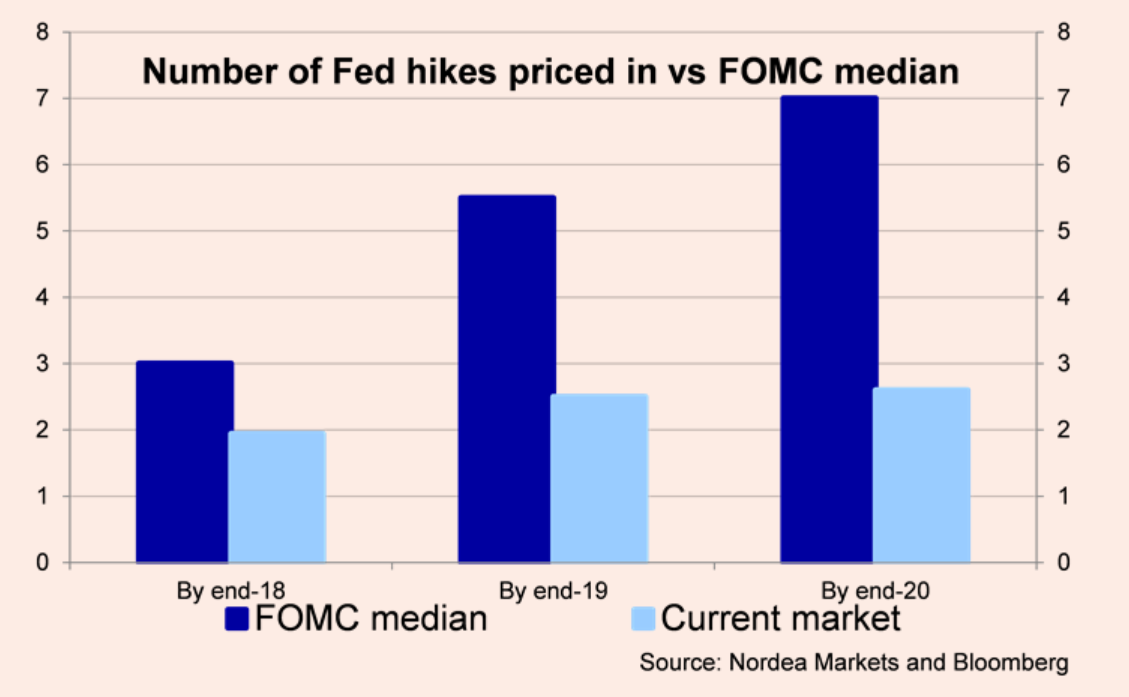 "Lower corporate taxes are a clear positive, but the impact depends largely on the use of the increased after-tax earnings. Corporates could use the additional earnings to invest, which is also incentivised by the immediate write-off of investments in machinery and equipment as an expense," says von Gerich.

However, he also flags that corporations have been fairly cash rich for years already, and yet have still shied away from investment.

"Corporates could also use the additional earnings to increase salaries. However, wages are generally being held back by a number of factors, such as globalisation and technological “disruptions”, which makes a sudden wage acceleration seem fairly unlikely, to us."

The more sceptical portion of the analyst community are of the view that tax-cut-money will be poured into more share buybacks and dividends.

"A growth boost of the order of 0.25 pp for 2018 and 2019 looks reasonable, but with upside risks. The upside risks stem mainly from the difficulties in estimating the behaviour of companies. The full expensing of investments could easily trigger more investments from US companies, while the lower corporate tax rate should make the US a more attractive place to invest for foreign companies," von Gerich says.

A headwind to higher growth however, is the fact the economy already appears to be operating at full capacity, as unemployment is the lowest it has been in 17 years. 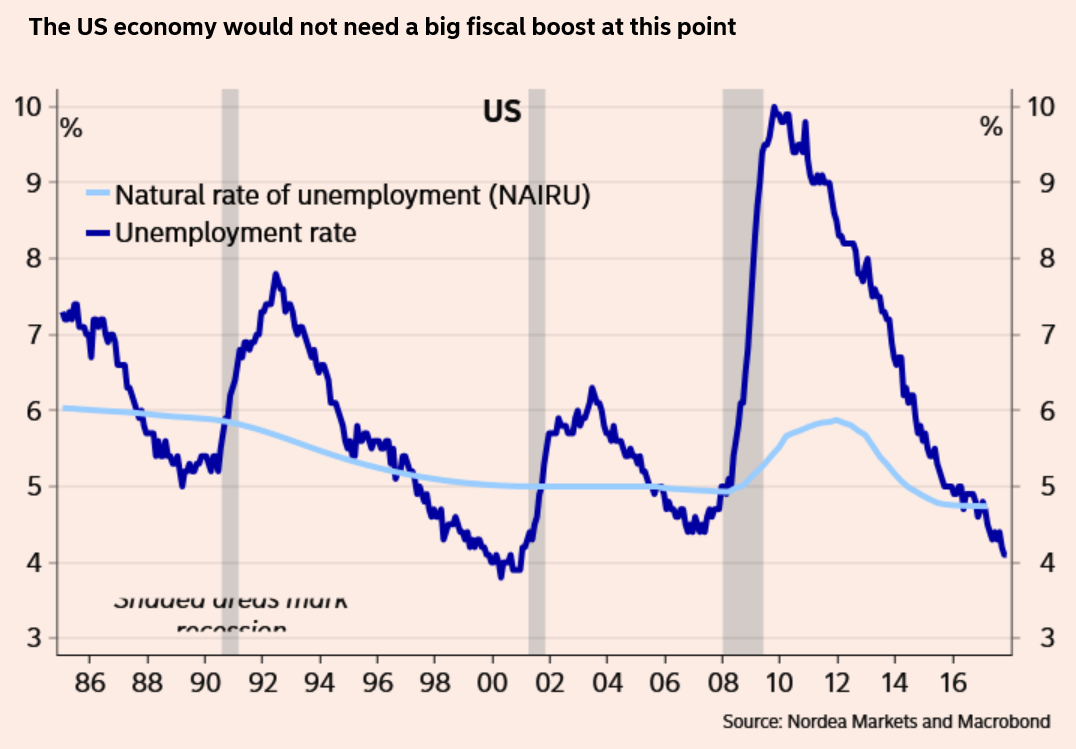 As far as the other great Dollar driver, repatriation flows is concerned, Nordea is more neutral, saying the size and composition of the flows is largely unknown and so the impact of repatriation can only be guessed at.

"It is hard to say how much US taxpayers are currently holding overseas in local currencies and which could be repatriated, as data as scarce, but estimates range from USD 150bn to USD 800bn. Moreover, if companies choose to restructure their FX debt mix, the effect could be larger," von Gerich adds.

Other analysts have argued that most of the funds overseas are already in US Dollars, so the impact on FX of their repatriation will be marginal.

"Our original estimate was that half of these legacy unrepatriated profits are already in USD. However, a survey carried out by the Brookings Institute found that the largest U.S. multinational corporations already have 95% of their undistributed foreign earnings in USD,” says Richard Grace, chief FX strategist at Commonwealth Bank of Australia.

Whether or not Nordea's Van Gerich had read the Brookings Institute data it does cast doubt over the likely impact of the reforms on the Dollar.

Indeed a recent study by Wells Fargo, which attempted to extract the impact of repatriated profits in 2005, suggested the strong performance of the Dollar could be explained, to a substantial degree, by the Fed which hiking interest rates at the time.