The Dollar is rising and price charts support this notion - both against a broad field of counterparts and versus the Euro - says one major investment bank.

The Dollar Index, which measures the Dollar's performance versus a basket of currencies, will probably rise to a target at 96.00 according to technical analysis from Goldman Sachs.

The move up from the September lows is likely to extend after breaking through a major trendline, says Goldman's Technical Strategist Sheba Jafari.

The young up move is what is known as an ABC type correction.

ABC corrections are composed of three waves in a zig-zag pattern in which waves A and C tend to be of similar or equal length. 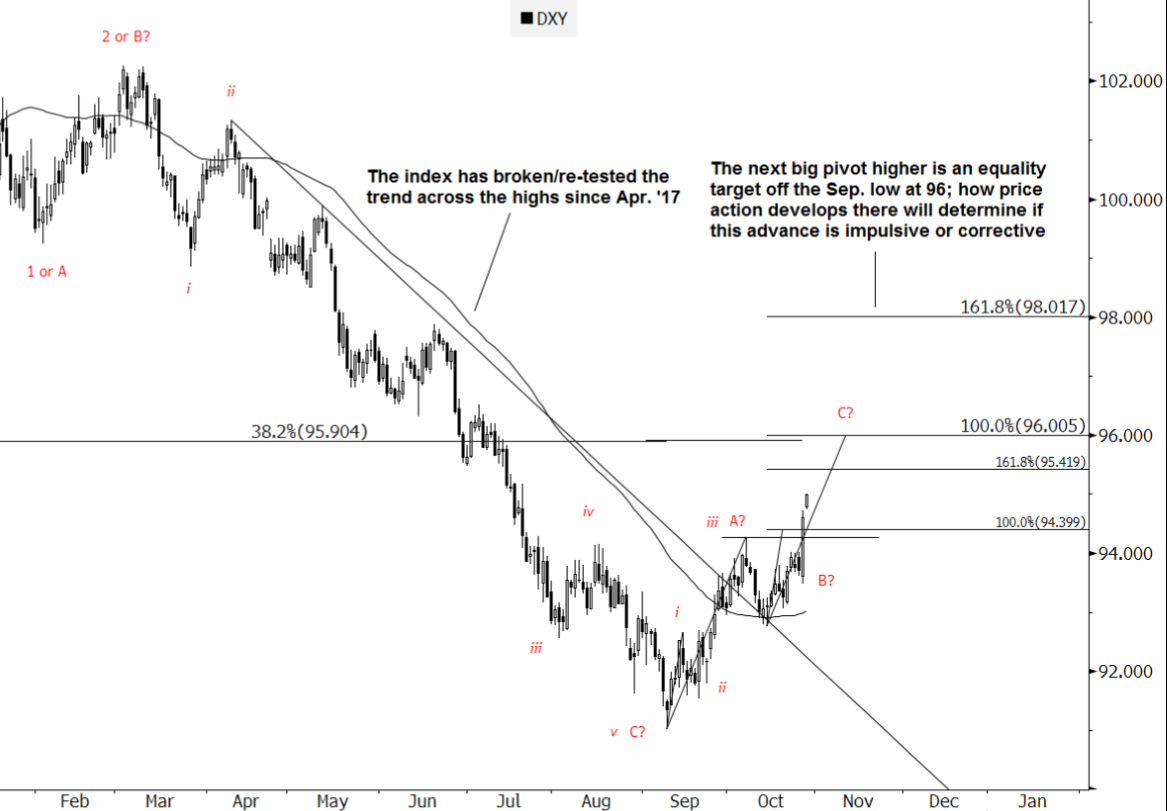 Applied to the Dollar Index, this suggests that the exchange rate will probably rise higher because for wave C to come close to the length of A it will have to extend to 96.00.

The 96.00 level is also favoured as a target because it happens to be an important Fibonacci retracement level.

Fibonacci retracement levels are levels drawn at intervals of the previous market move, which in this case is the long down trending move which went from the February highs down to the September lows.

This level is likely to present an obstacle to prices and they may well stall, pull-back, or perhaps even reverse at the further enhancing its viability as an upside target.

The next upside target is represented by 98.02.

This is got by extrapolating the A wave of the ABC correction higher by 1.618.

This is because rarely in ABC sequences the C wave is substantially longer than the A wave.

Often it is longer by a multiple of Fibonacci ratios.

In this case, Goldman Sachs are extrapolating wave A by 161.8% which is the multiple of the Fibonacci 1.618 ratio which the Golden Ratio or Golden Mean in ancient philosophy.

The Golden Ratio is supposed to conform to perfect proportion but is applied in this case it suggests a target for the end of wave C at 98.02.

The longer-term charts for the Dollar Index suggest a bullish outlook.

Basically, Elliot Wave analysis posits that financial markets move in five wave trends, interspersed by three wave corrections - such as the ABC correction we just analysed on the daily chart.

Using Elliot wave to analyse the broader trend, however, indicates the pair may be in the fourth wave of a larger five-wave trend which began at the early 2008 lows. 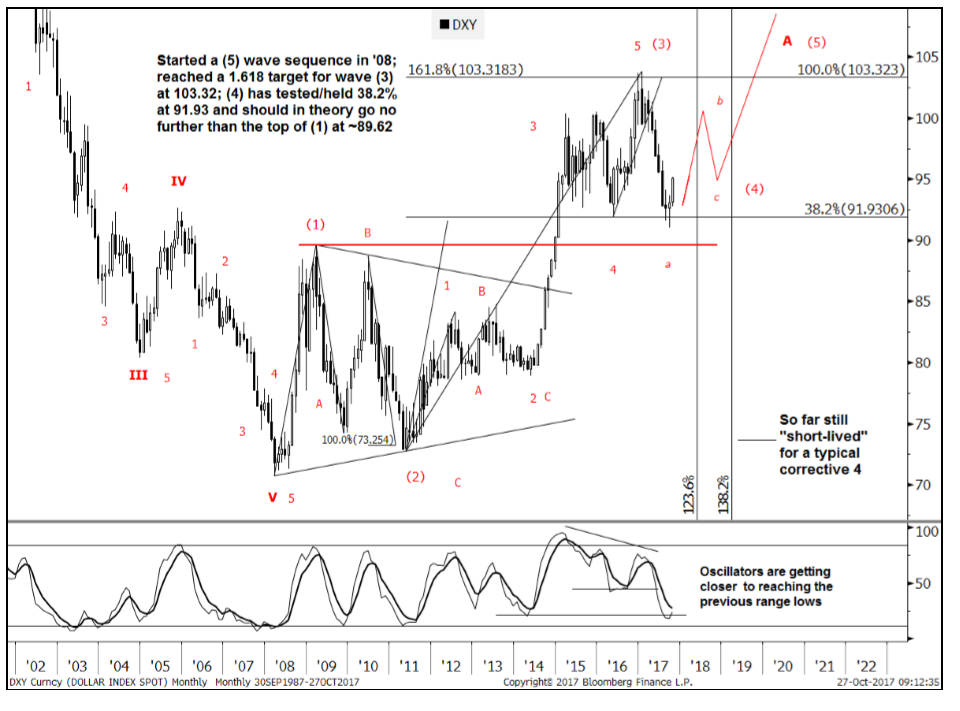 Within that fourth wave, it appears to be bouncing off historic support at the 91.90 level which has bound the range of the wave four thus so far.

It suggests the move will extend higher towards the top of the wave four consolidation range at about 100.00.

Eventually, wave four will give way to wave five which promises to be a stronger motive wave in the direction of the uptrend.

It is a rule of Elliot analysis that wave fours never move back down into the territory below the top of wave 2 - which in this case it as 89.62, thus suggesting downside will be limited to this floor.

Goldman expects EUR/USD to continue weakening, with a potential downside target at between 1.1458-23.

Within this zone is the 38.2% Fibonacci retracement of the long uptrend which unfolded between March and September, and therefore a level expected to prevent deeper weakness.

It will also mean that the ABC correction which started after the September highs rolled over has waves A and C which are of roughly equal length.

Sachs suggests that the move down from the highs could be the start of a wave 4 of a broader five wave Elliot cycle higher.

This makes perfect sense given the recent strong rally higher in spring and summer has all the characteristics of a wave 3.

Goldman says that wave 4s often retrace 38.2% of the preceding wave 3 - in fact, I have found they often fall further, to the midpoint or 50.0% Fibonacci retracement, suggesting the possibility of even deeper correction to roughly the 1.12s. 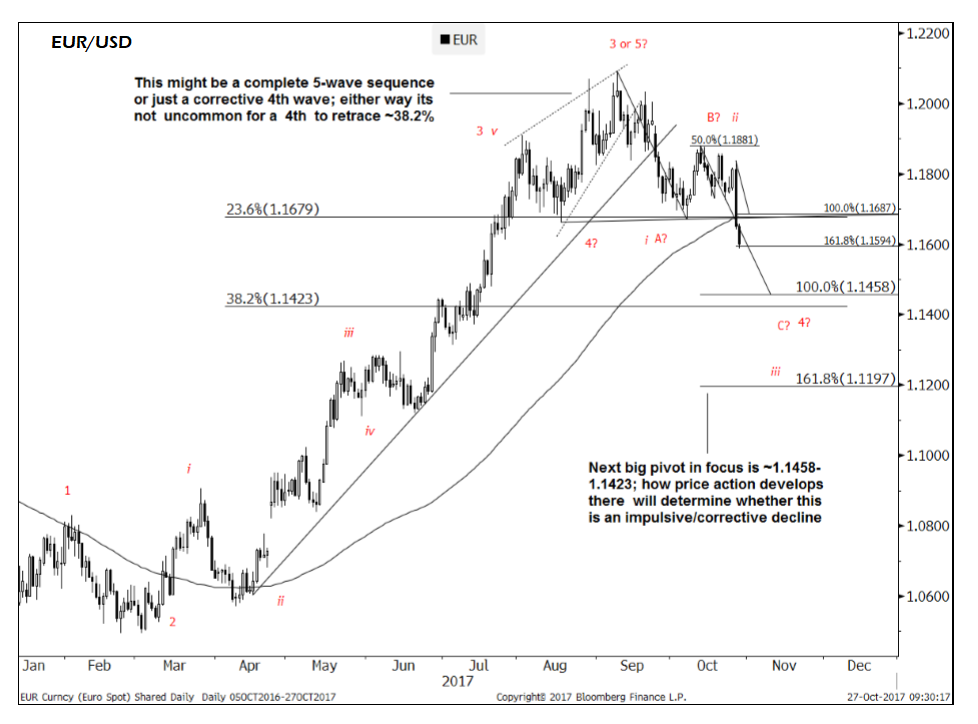