The British pound (GBP) starts 2015 under pressure as UK economic data underperforms expectations and USD buying across the currency market picks up pace.

Demand for the pound sterling meanwhile remains poor with a run of poor data releases at the start of 2015 undermining demand in the near-term.

The outlook for the pound to dollar exchange rate (GBP/USD) will remain poor as long as weak data releases back the case for the Bank of England to remain on the sidelines when it comes to raising interest rates over the course of the next 12 months.

But just how far will the UK currency fall against the US dollar?

USD Has a Year's Worth of Upside Potential

"The U.S. Dollar enters 2015 on a bullish footing with at least another 12 months of buying interest envisaged before this current cycle ends," says Lucy Lillicrap at AFEX, the currency brokerage.

Demand for the dollar is expected to dominate the currency landscape in 2015 with the EUR/USD pairing in particular indicating it has plenty of downside potential this year.

"Moreover despite the historic tendency for GBP/USD to lag (and thus gain some ground in cross rate terms) values evidently failed to establish themselves back above key resistance in 2014 and the result of this is to make crucial supports vulnerable to attack over coming months instead," says Lillicrap.

Where will sterling dollar selling end?

According to AFEX technical forecasts there is a clear line below which GBP/USD will be uncomfortable passing.

The following long-term historical chart tells us an interesting story as to where this currency pair resides. 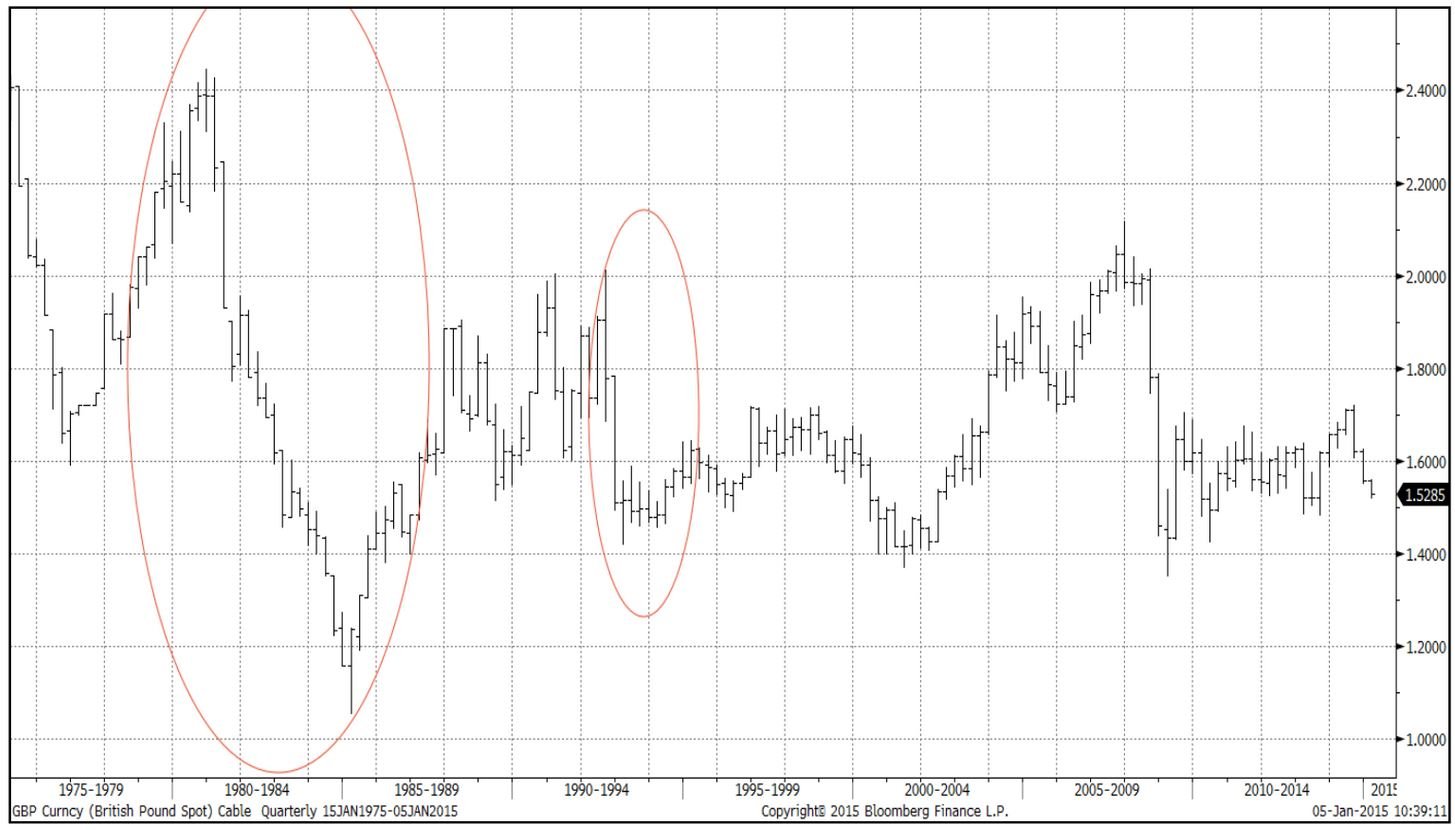 The hangover of the oil crisis of the 1970’s was still being felt when James Callaghan came to office in 1976. His response was to tighten money supply in response to inflation levels that were approaching an eye watering 30%.

As we know today, higher interest rate yields command higher currency valuations. The resultant squeeze on money supply induced the recession of the ealry 1980's which inevitably saw the decline in the UK exchange rate.

The macro-economic conditions of today are a far cry from what they were in the late 1970's and early 1980's - as such we draw the conclusion that economic fundamentals simply do not suggest a decline below 1.40 is warranted.

"Attention clearly switched to Sterling at the very beginning of 2015 with prices experiencing a sharp sell-off to end last week.

"Oversold near term readings would argue some relative stability is possible here initially but given the absence of an obvious base or reversal pattern fresh GBP strength will probably prove unsustainable.

"Thus, even if an extension below the psychological 1.5000 level is delayed for several more days, downside risk predominates from an intermediate perspective.

"For the most part in recent years this pair has remained largely range bound between 1.4000 and 1.7000. Having failed on the top-side in 2014 a re-test towards the 1.4800 area lows we saw in 2013 is now implied going forwards with intervening recoveries likely to remain relatively short-lived."

Barclays is one major investment bank forecasting GBP/USD in the 1.40's in 2015.

USD/JPY meanwhile remains in a well-defined recovery formation and despite having advanced significantly since basing out during 2011 no end currently looks within sight for this positive trend either.

The extreme movements witnessed for emerging market pairs probably characterised USD foreign exchange movement as much as anything else last year and while a number of these now appear to be at least temporarily exhausted (USD/RUR for example) the focus of attention looks likely to remain on this sector in Q1 2015.