Sterling rose in what was a buoyant market for risky assets and a hostile environment for the U.S. Dollar last week but it was unable to overcome a double-barreled layer of technical resistance around 1.2174 on the charts and could now struggle to advance further in the days ahead.

This is partly because of developments in China over the weekend where fresh unrest over the latest round of coronavirus-related restrictions is likely to keep financial markets focused on the heavy economic costs of the government's continuing attempt to contain the virus.

That would be a dampener for global market risk appetite and something that could set the Pound to Dollar rate onto its back foot from early on this week.

"New cases have risen sharply in recent weeks which is increasing the risk of tighter restrictions and a more marked growth slowdown heading into year end. Those fears should offer some much-needed support for the USD," writes Lee Hardman, a currency analyst at MUFG, in a Friday market commentary. 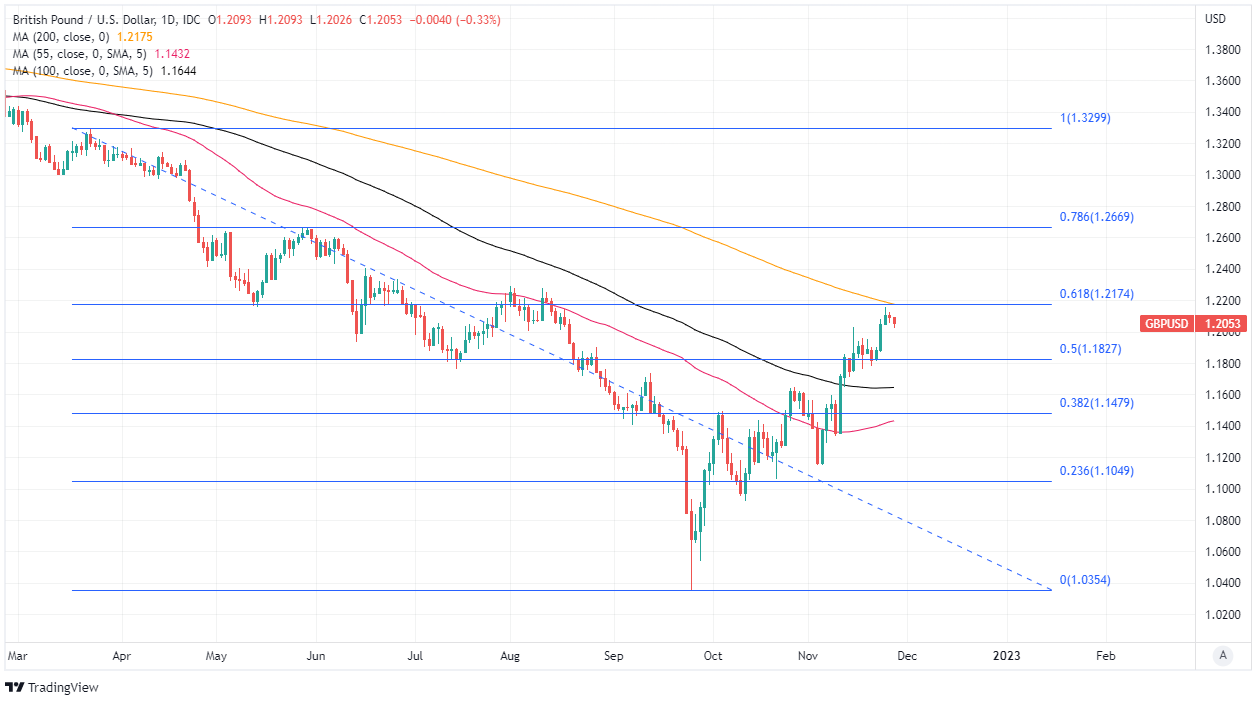 "Fed Chair Powell is expected to push back as well in the week ahead against the recent easing of financial conditions. It should encourage the USD to rebound after the heavy sell-off this month," Hardman adds after advocating that clients consider selling NZD/USD this week.

While developments in China are likely to set the mood around the opening of the week, Wednesday's speech from Federal Reserve Chairman Jerome Powell and this Friday's release of the November non-farm payrolls report will be most consequential for the Pound to Dollar rate outlook.

"GBP is currently trading near a three month high because of the recent depreciation in the USD and less UK political uncertainty," says Joseph Capurso, head of international economics at Commonwealth Bank of Australia.

"FOMC chair Powell may cause market participants to reassess the global economic outlook because he is likely to talk up the need for tighter financial conditions," he adds in a Monday research briefing. 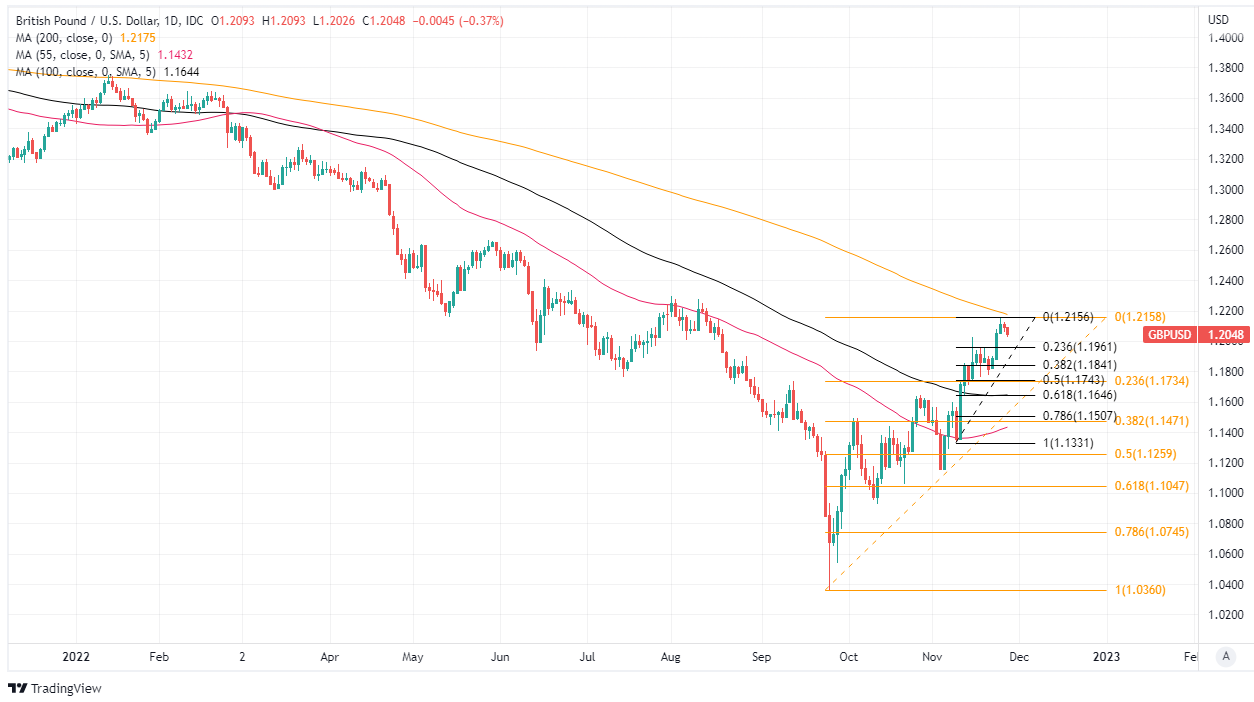 Above: Pound to Dollar rate shown at daily intervals with Fibonacci retracements of late September and early November rallies iindicating possible areas of technical support for Sterling. Selected moving-averages denote possible areas of support and resistance. Click image for closer inspection. If you are looking to protect or improve your international payment budget you can secure today's rate for use in the future or set an order to lock-in your ideal rate whenever it becomes available. More information can be found here.

Capurso and colleagues look for the Pound to rise during the opening half of the week but have warned that it and other currencies could lose ground from Wednesday if Jerome Powell succeeds in reviving an earlier rally in U.S. bond yields or if his remarks lead financial markets to shun risky assets.

There is a significant risk or chance that Chairman Powell will dispel on Wednesday the market exuberance that had led Dollars to be sold in favour of riskier currencies during the weeks since official figures suggested earlier in November that U.S. inflation rates had fallen back in October.

"He is expected to push back against a premature easing of financial conditions by reiterating that rates are likely to rise to a higher level than previously expected. The Fed’s policy plans remain heavily dependent on incoming economic data," MUFG's Hardman says.

"Insight into the US growth and inflation outlook will be provided by the release of the latest NFP report, ISM manufacturing survey and PCE deflator report. Recent data has pointed to a softening of growth and inflation momentum encouraging speculation over a slowdown in the pace of Fed hikes," he adds. 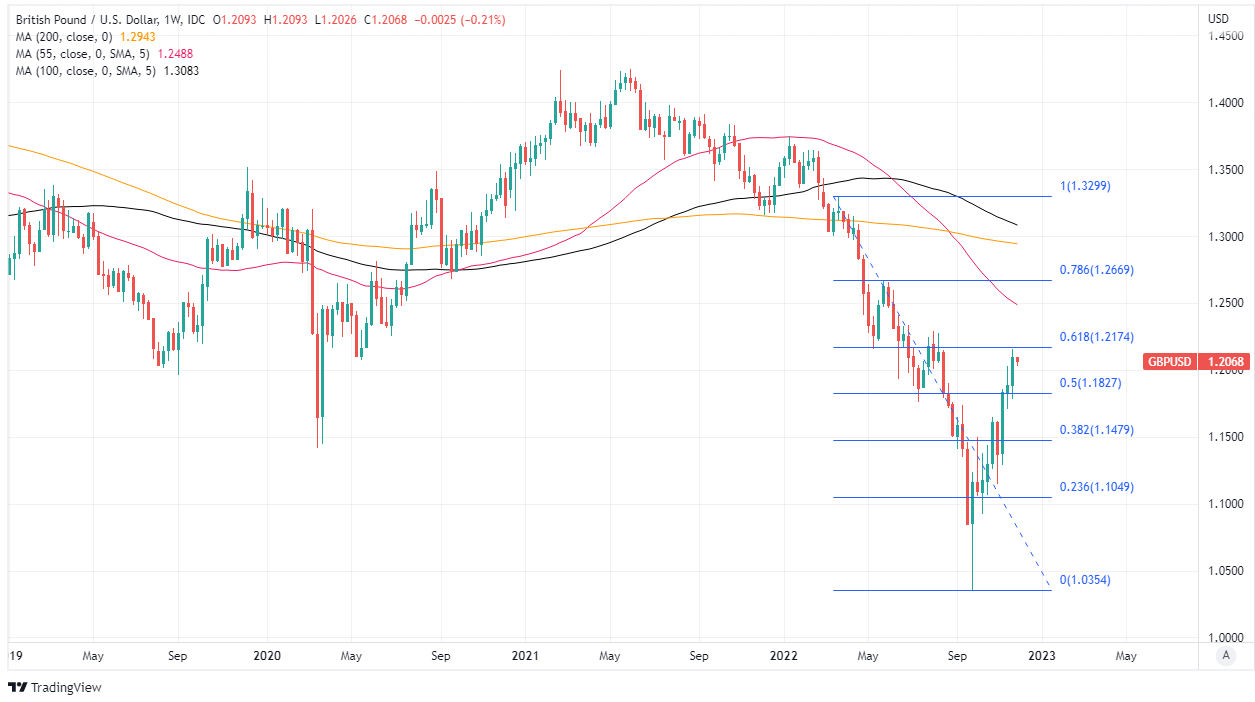 Markets celebrated the recent decline in U.S. inflation as if it meant an end to the Fed's interest rate cycle is near but the danger is that Chairman Powell reiterates on Wednesday that borrowing costs are still likely to be lifted further and held at their peak until inflaton is well on its way back to the 2% target.

This could cause upset in financial markets, risk aversion among investors and losses for the Pound-Dollar rate if the Fed chair makes clear at the same time that borrowing costs are likely to be lifted to higher levels and held there even if the economy and labour market show clear signs of deterioration.

There is a risk that such signs will be visible as soon as this week when U.S. GDP data for the third quarter is released on Wednesday, which comes ahead of the November non-farm payrolls report in which economists are expecting to see further strong jobs growth with employment up by an anticipated 200k.

However, corporate earnings figures released over the course of October and early November have made clear that even some of the largest U.S. companies have begun to lay off workers due to a deteriorating domestic and international economic environment, meaning that a deterioration of the employment data may not be that far off.