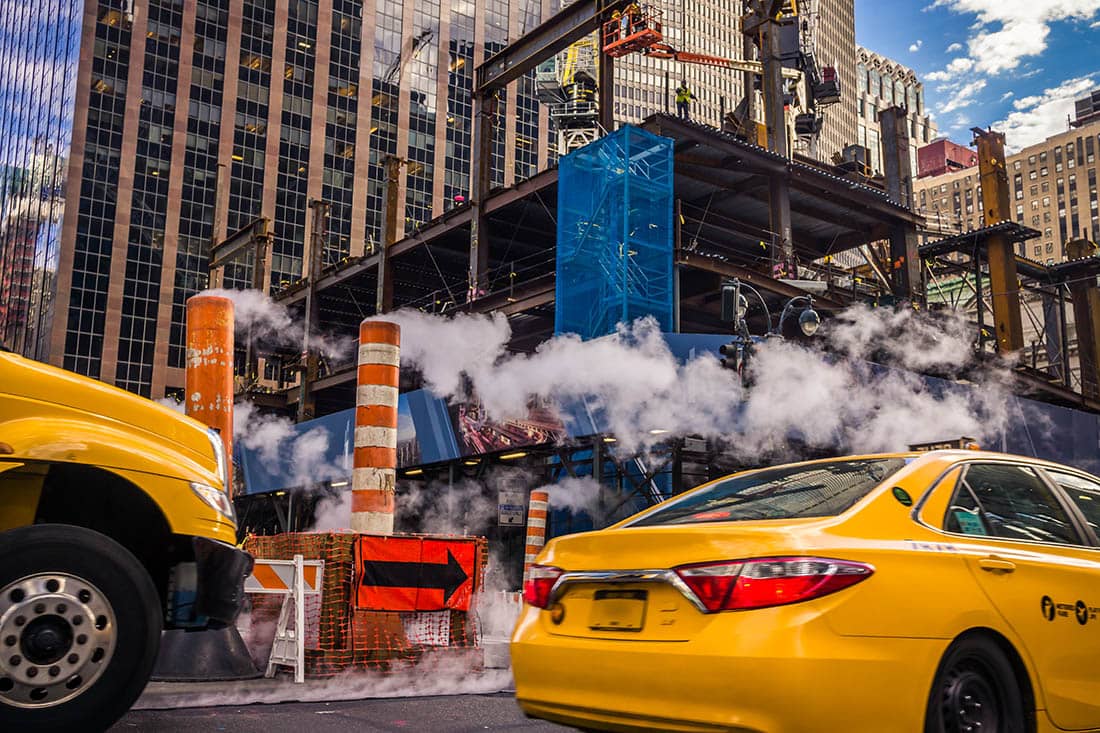 The Pound to Dollar exchange rate climbed back above 1.20 for the first time since August in midweek trade as losses for the greenback grew following the release of data suggesting that key U.S. industries contracted this month and that the local labour market may be beginning to crack.

Dollars were sold widely throughout much of the Wednesday trading session in Europe but the greenback's losses deepened when the Department of Labor announced the largest one-week increase in new unemployment claims since August and after S&P Global PMI indices fell to new post-pandemic lows.

"This is disappointing but not entirely a surprise," says Ian Shepherdson, chief economist at Pantheon Macroeconomics.

"We are increasingly inclined to think that the trend in claims is now rising gently, as firms come under increasing pressure from the Fed's aggressive tightening," he adds in reference to the unemployment claims data.

New unemployment claims reached 240k during the week to last Friday in an outcome that appeared to incite the Pound-Dollar rate into taking a run toward the 1.20 level though it was the release of S&P Global PMI surveys hours late that enabled Sterling to climb back above 1.20. 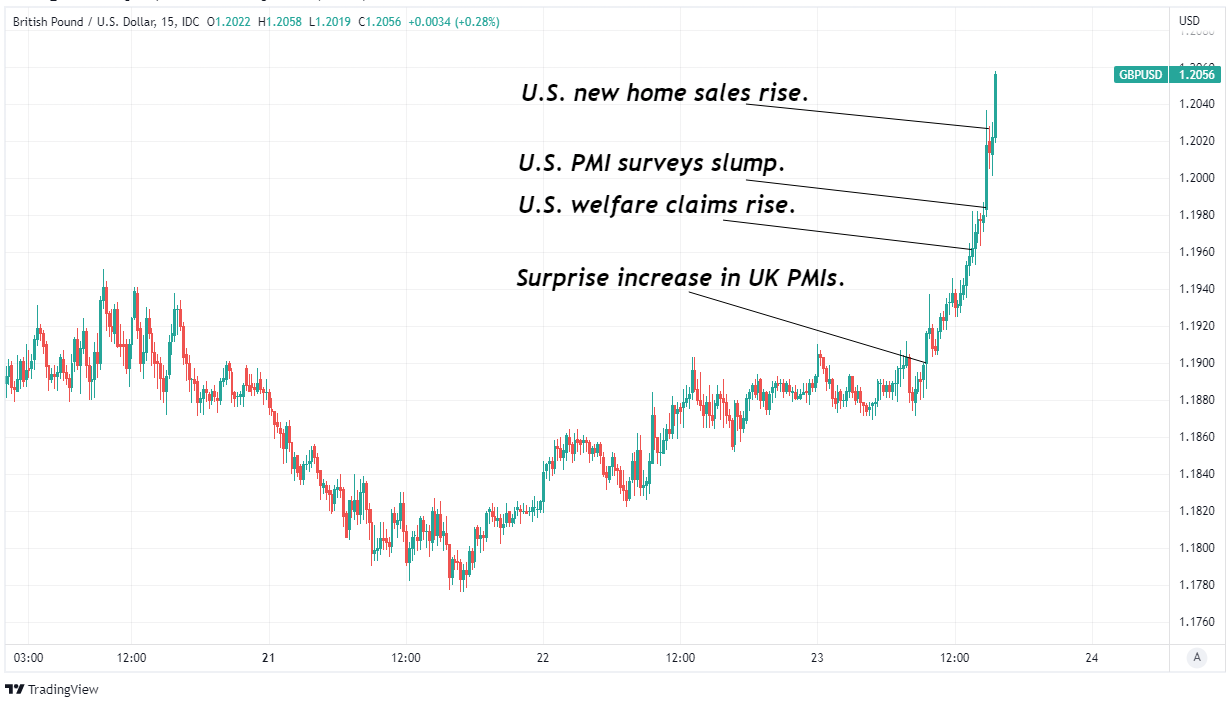 "While market participants consider S&P Global’s PMI index to be less reliable than the survey collected by ISM, the latest data has acted merely in confirming the market's prior disposition. For this reason, today’s PMI data has taken the dollar back to recent lows," says Jay Zhao-Murray, an analyst at Monex Europe.

New orders from both domestic and international clients were lower in November while hiring slowed across both industries as elevated inflation and rising interest rates weighed on demand, although there were signs that price pressures may now be easing.

"Reflecting the slower growth of input costs, firms raised their selling prices at the slowest rate for just over two years. The pace of charge inflation was notably softer that seen earlier in the year," S&P said.

Dollar exchange rate losses deepened following the release of the PMI data only for the greenback to stabilise soon after when the Census Bureau said that new home sales rose by 632k during October, up from a downwardly revised 588k previously and the first increase in three months.

"The jump in sales is impossible to square with the collapse in mortgage demand," Pantheon Macroeconomics' Shepherdson says.

"This strength in prices simply cannot be sustained, even if existing home inventory remains low; we estimate that prices need to fall by about 20% before they reach a more sustainable level in relation to incomes," he adds. 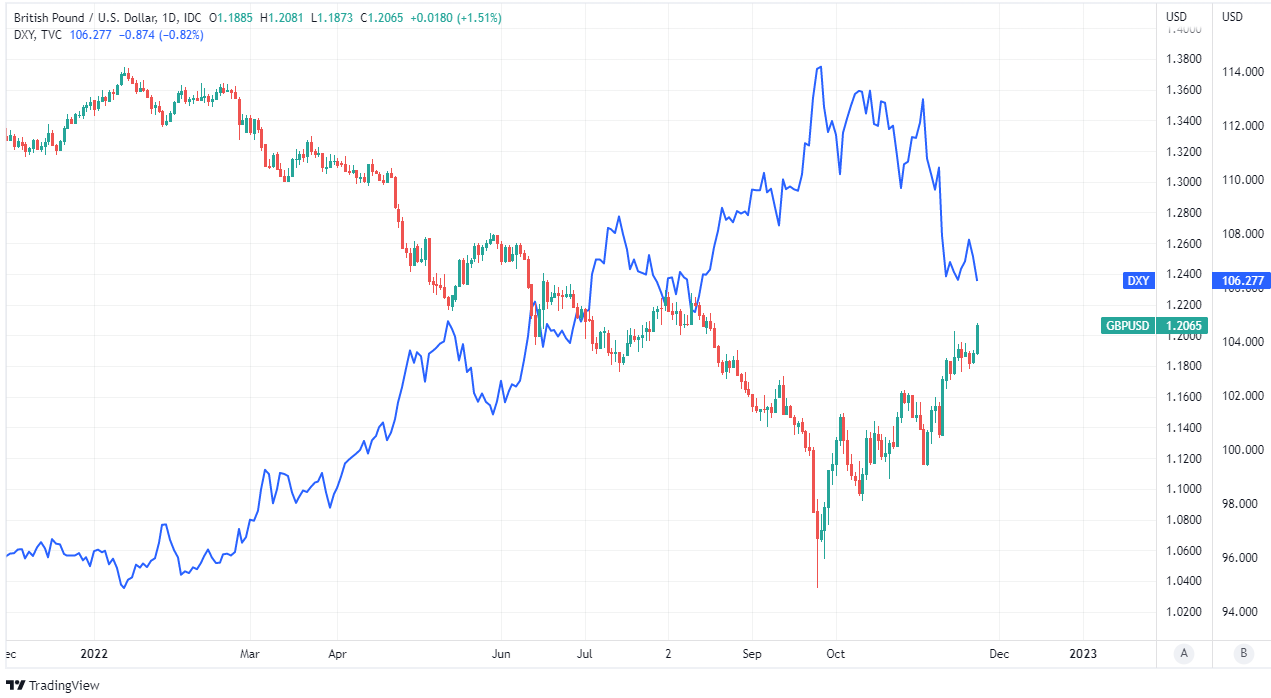 Above: Pound to Dollar exchange rate shown at daily intervals alongside U.S. Dollar Index. Click the image for closer inspection. If you are looking to protect or boost your international payment budget you could consider securing today's rate for use in the future, or set an order for your ideal rate when it is achieved, more information can be found here.

Those data came alongside University of Michigan figures suggesting that consumer expectations of inflation eased lower this month in an outcome that is likely to be welcomed by the Federal Reserve (Fed), which may be why respite for the Dollar was short-lived.

"We are a little nervous that the 7% fall in the dollar against the currencies of its main trading partners and the 45bp drop in the 10Y Treasury yield is leading to a significant loosening of financial conditions – the exact opposite of what the Fed wants to see," says James Knightley, chief international economist at ING.

"Consequently, we wouldn't be surprised to see the Fed language become even more aggressive over the coming week, talking about a higher terminal interest rates – with some of the more hawkish members perhaps even opening the door to a potential fifth consecutive 75bp hike in December to ensure the market gets the message," he writes following a review of Wednesday's data.

This is why the inflation expectation numbers might be unlikely to change the Fed's hawkish interest rate stance, which still poses risk to the Pound and will be back in focus again in the days ahead as financial markets sift through minutes of November's monetary policy meeting.

Here many will likely be looking to see how many on the Federal Open Market Committee agreed with the sentiments expressed by Chairman Jerome Powell when he told a press conference that U.S. data has argued for a higher peak in interest rates than the 4.75% suggested in September's forecasts.