"Sterling/Dollar recorded a loss of 0.82% last week, which means that it has lost ground in five of the last six weeks," says Bill McNamara, head of The Technical Trader, who says there is little to suggest the exchange rate is close to bottoming.

"Much of this has to do with dollar strength of course, as the US adjusts to the idea of a more hawkish stance from the Fed," says McNamara.

Further declines in midweek trade come amidst growing signs that Prime Minister Boris Johnson is to tighten Covid-19 restrictions once more, with a Work from Home order set to be introduced as soon as Thursday.

Pound Sterling Live notes that this will hamper UK economic activity significantly into year-end and all but erase the odds of a December rate hike at the Bank of England. 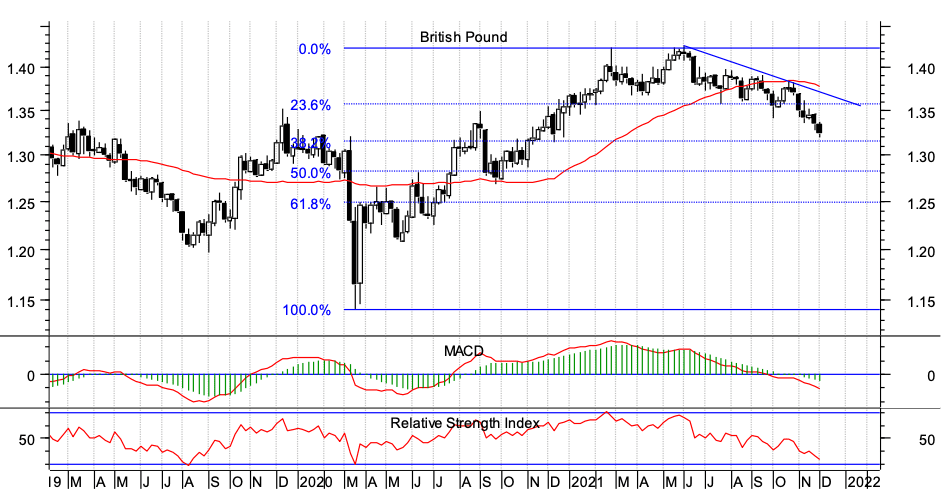 Above: Weekly GBP/USD chart, courtesy of The Technical Trader.

The analyst says the weekly chart shows that Sterling has retreated to levels that were last seen a year ago.

"Although it is now more oversold than at any point since March 2020, there is still little in the broader technical picture to suggest that it has touched bottom," he adds.

But Thomas Flury, Strategist at UBS, is looking for a more sideways orientated move to develop from here.

"The recent decline of the GBP was also driven by a wave of risk aversion that swept across global markets in the wake of reports on the new COVID-19 variant, omicron. Sterling unsurprisingly lost out, as it is a typical risk-on currency that does well when equity markets are rallying and suffers when they fall," says Flury.

The strategist says the move lower by GBP/USD was more moderate than had been the case during past episodes of Covid-induced anxiety in the past.

Markets slumped following the announcement that a new variant of Covid-19 had rapidly become dominant in South Africa and was already spreading across the world.

The risk-off reaction of investors would typically be met by solid buying of the highly liquid Dollar, but it appears investors were already so heavily committed to being 'long' the Dollar that what in fact ensued was a positioning clearout.

"Interestingly, the USD has not been a major beneficiary of the move back into safe havens. Not only are the JPY and the CHF performing better than the greenback, but even the EUR and the GBP have clawed back some gains. We strongly believe that this is due to positioning," says Jane Foley, Head of FX Strategy at Rabobank.

This 'position clearout' narrative explains the rally in the Euro but the fall in the Dollar of early December.

"We expect the situation to normalize soon, and we think financial markets will regain confidence, which should support a sideways trajectory for GBPUSD going forward," says Flury.