The Pound to Dollar rate has been dragged deep in the red for 2021 by a cocktail of economic risks and central bank policy developments that may push it lower still during the week ahead, potentially prompting a test of major support levels just beneath the current market.

Sterling was again one of the bigger fallers in another bloody week for risk assets, with losses prompting the Pound-Dollar rate to set new 2021 lows just beneath 1.32 in price action that was only one half a response to uncertainty about the risks posed by the newest strain of coronavirus

Adding weight around the ankles of the Pound-Dollar rate has been changes in expectations for central bank policies after last week’s congressional testimony from Federal Reserve Chairman Jerome Powell.

This lead the market to anticipate a quicker pace of policy normalisation in the U.S., just at the point when investors were becoming more reserved in their expectations relating to the Bank of England (BoE) Bank Rate.

“All told, we think this is a Powell-Fed that is now in the business of owning optionality to hike soon after tapering if it needs to (like other CBs), a setup that we think will be rather important for containing inflation expectations. For the average household, it certainly is easier to understand the prospect of rate hikes and its impact on the economy, rather than QE tapering,” says Mazen Issa, a strategist at TD Securities.

“That should keep the USD in our better graces for now. As much as we are aware of the seasonal dynamics this month, which augur for underperformance, the fluidity of monetary policy should remain a key anchor for broad dollar dynamics,” Issa and colleagues wrote in a note last week. 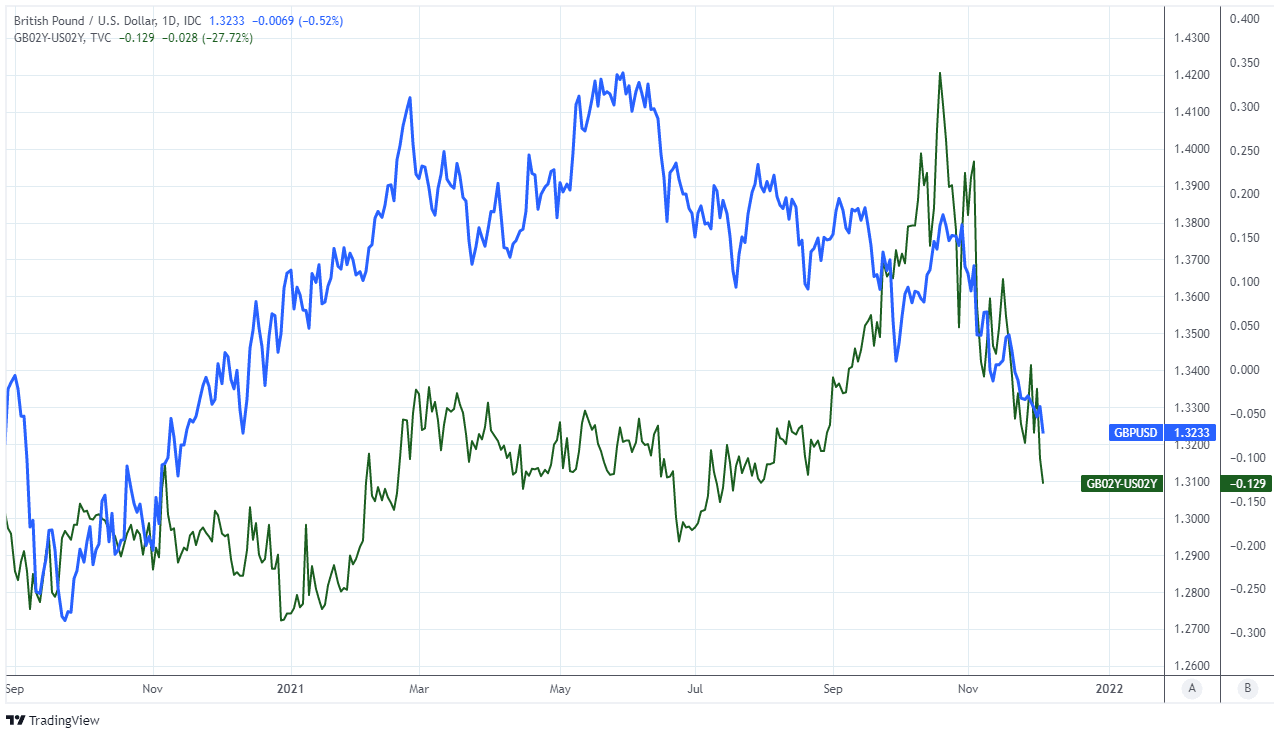 Above: Pound-Dollar rate shown at daily intervals alongside spread, or gap between yields on 02-year UK and U.S. government bonds.

Concerns about possible global economic disruption stemming from the latest mutation of the coronavirus weighed heavily on risk currencies like Sterling last week.

The Dollar also appeared to be bolstered by a sharp rise in U.S. government bond yields after Chairman Jerome Powell told Congress that risks of persistent above-target U.S. inflation likely merit a faster end of the Fed’s bond buying programme than currently provided for.

The Pound-Dollar rate was weighed down heavily as financial markets quickly came to anticipate that next week’s December 15 meeting will see the Fed replace November’s plan to wind down its $120BN per month quantitative easing programme by the end of June 2022 with one that curtails the bank’s purchasing activity around the end of March 2022.

This would then give the Fed the option of raising its interest rate at any point after that stage.

“We have made significant adjustments to our Fed call, anticipating that the FOMC will announce a more aggressive taper at its upcoming December meeting that positions it for liftoff of the policy rate in March 2022, more than a year earlier than our prior baseline of June 2023,” says Cristian Keller, head of global economic research at Barclays.

Barclays anticipates the Fed will begin lifting the Fed Funds benchmarks in March next year and projects no less than three rate rises by the end of 2022, while the firm’s expectations for the BoE’s Bank Rate are far more reserved.

“By contrast, members of the BoE's MPC this week seemed to support our call that a hike may be delayed further into next year, despite healthy labour market data and new inflationary pressures," Barclays’ Keller said in a Friday note.

Long-standing hawk Saunders struck an unusually cautious stance in a speech at the end of the week, suggesting that he may not vote for a hike in December, due to the uncertainty created by the new variant,” he adds.

Recent Pound-Dollar rate losses have likely been exacerbated by a market-wide moderation of expectations for the BoE’s Bank Rate that was encouraged last Friday when one of the Monetary Policy Committee’s most hawkish members suggested it would be prudent for the BoE to wait until the new year before lifting the benchmark interest rate from its current 0.1% to 0.25%.

The resulting divergence between expectations for interest rates in the UK and U.S. mean the Pound-Dollar rate’s recent losses have not been without merit, although the scale of declines has been enough to get some analysts mulling if it could be a good idea to begin buying the dip in Sterling.

“The difficulty associated with buying short-term dips in GBPUSD spot is that the Fed is currently flagging the risk of a faster pace of normalization. However, as a short-term consideration, we would anticipate that a faster QE taper from the Fed would be fully priced into GBPUSD in the 1.30-1.31 range,” says Stephen Gallo, European head of FX strategy at BMO Capital Markets. 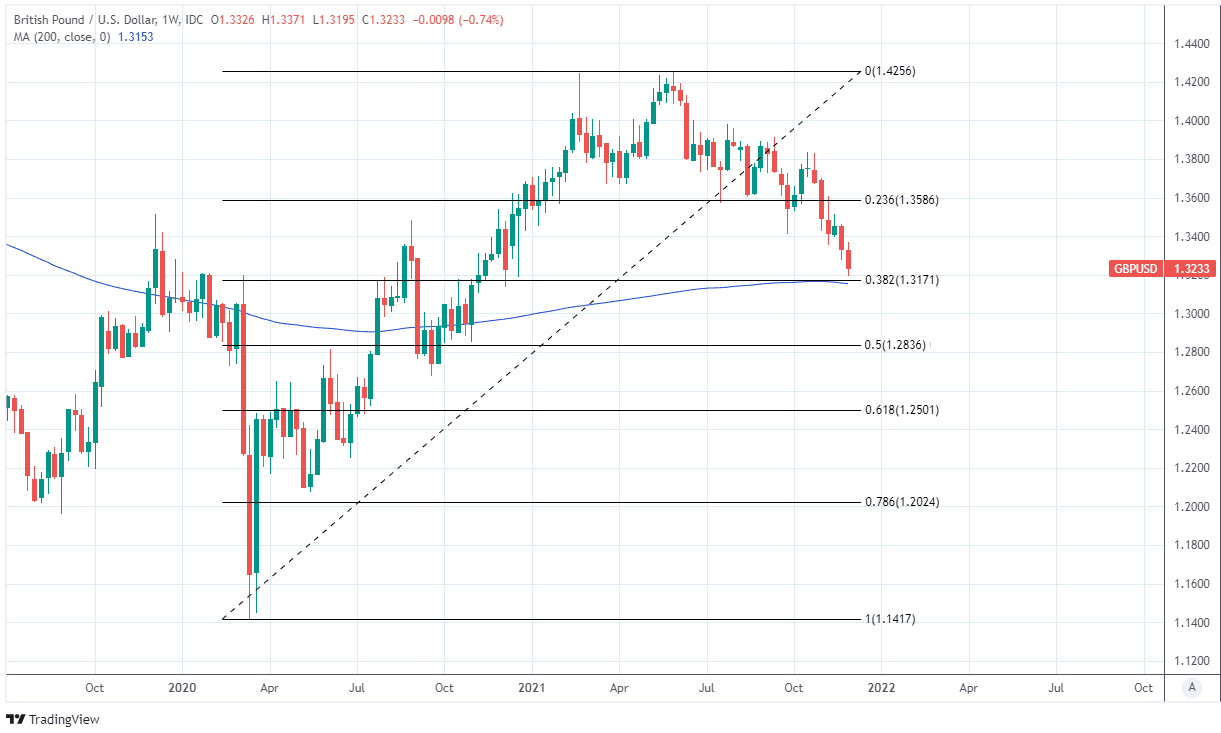 Meanwhile, other analysts have long been anticipating that a nearby cluster of major technical support levels would bring an end to the Pound-Dollar rate’s now five month decline and reiterated that expectation last Friday.

“We continue to look for a floor at our core objective of 1.3189/35, which is the major cluster of supports including the 38.2% retracement of the 2020/21 rise, December 2020 lows, long-term 200-week average and the lower end of the downtrend channel from June,” says David Sneddon, head of technical analysis at Credit Suisse.

Whether or not these support levels hold through the week ahead may depend heavily on what investors make of a looming speech from the BoE’s Deputy Governor Ben Broadbent covering the outlook for growth, inflation, and monetary policy at 11:30 on Monday.

This is the highlight of the week for Sterling before Friday when November’s U.S. inflation data is released just hours after the UK’s October GDP data, although each of these latter data points is likely to be overshadowed by the potential implications of the new coronavirus strain.

“After a slightly more cautious outlook from Saunders – particularly on the impact of Omicron – Broadbent will take the stage on Monday (11:30am UK time) to discuss his economic and inflation outlook heading into 2022,” says Sanjay Raja, an economist at Deutsche Bank.

“The focus here will be almost squarely on Broadbent's comments around the new variant and whether that possibly shakes up the Bank's forward guidance and thinking heading into the Dec meeting,” Raja also said. 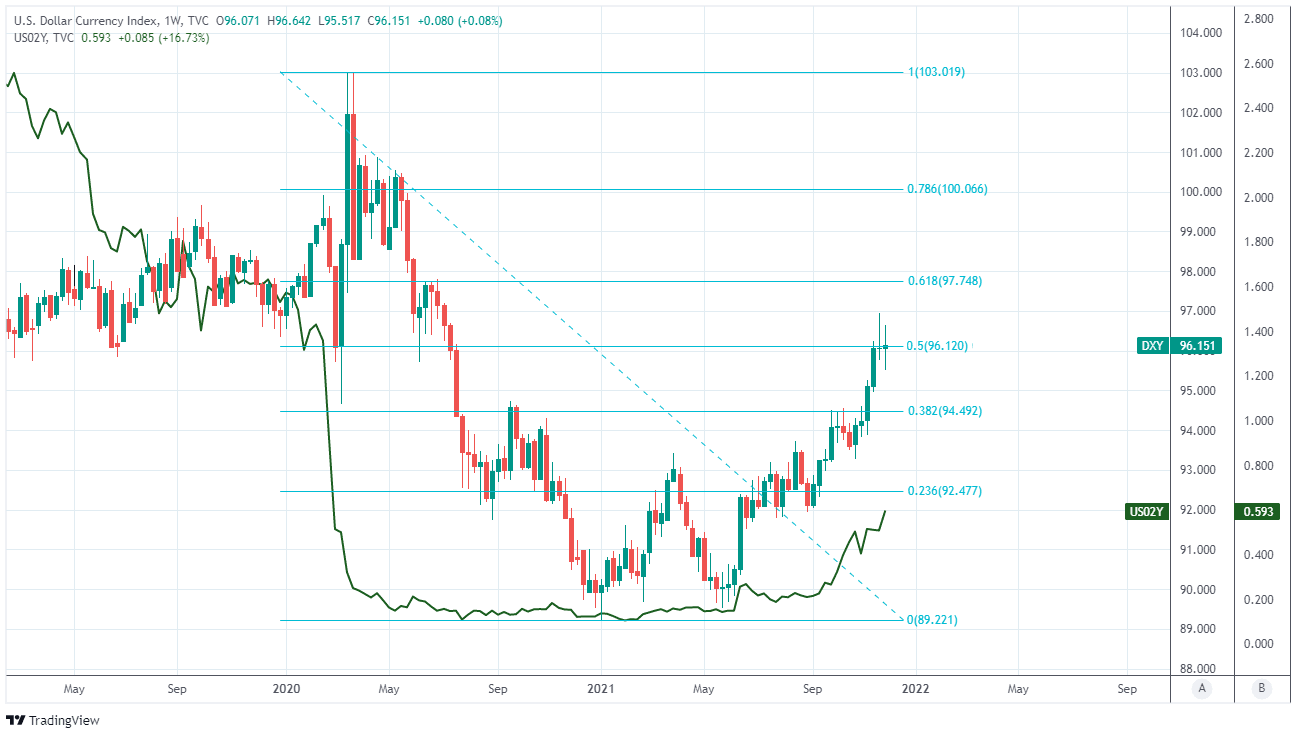