The Pound to Dollar rate showed signs of stabilising near new 2021 lows last week and may attempt a corrective rebound if global markets recover from recent losses this week, although the prospect of a further ‘hawkish’ shift at the Federal Reserve (Fed) is likely to limit Sterling’s recovery potential.

Sterling may have suffered heavy losses against low yielding funding currencies last Friday but it proved relatively resilient against the greenback when limited declines were pared back ahead of the weekend, potentially leaving the Pound-Dollar rate poised for a rebound early in the new week.

“The 1– and 6-hour charts strongly suggest an interim low at least may be developing via bullish outside range signals. We note that the daily chart shows—at the moment– a daily “hammer” signal in development. If the GBP can hold these sorts of gains over the balance of the session, a squeeze higher towards 1.34 may develop,” said Juan Manuel Herrera, a strategist at Scotiabank, writing in a Friday note.

The Pound-Dollar rate rebounded slightly from 2021 lows beneath 1.33 ahead of the weekend, belying the breadth and depth of losses seen elsewhere in the markets ahead of the weekend as investors responded with panicky haste to the detection of a new coronavirus strain in Africa. 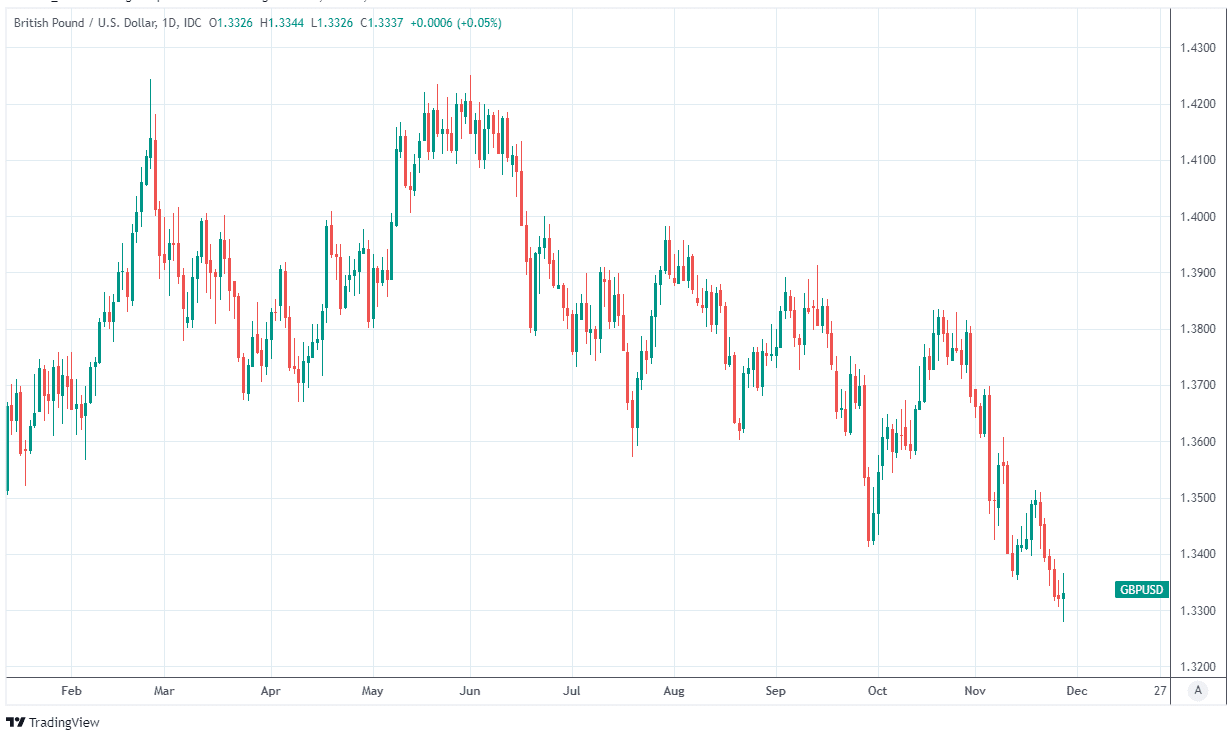 While the emergence of the new and many times mutated strain of the coronavirus - dubbed omicron - led some governments to impose travel restrictions on a collection of African countries and caused panic in global markets it has since emerged that those who’ve contracted the new strain so far have displayed only mild symptoms.

Should this be enough to restore calm in global markets and cultivate a return of risk appetite among investors then the Pound-Dollar rate recovery could potentially extend over the coming days.

“The market is losing downside momentum very near term, however remains under pressure,” notes Karen Jones, head of technical analysis for currencies, commodities and bonds at Commerzbank.

“Beyond a minor bounce, the cross is likely to remain under pressure and on course for the 200-week ma at 1.3158,” Jones and colleagues wrote in a Friday research presentation.

The rub for Sterling however, is that any such recovery could ultimately prove to be limited in duration and scale due to the mounting risk of a further ‘hawkish’ shift in the monetary policy stance of the Federal Reserve, a risk which had already weighed heavily on the Pound last week.

This is after minutes of the November meeting revealed last week that a number of the Fed’s rate setters were already of the view that it could become necessary for the bank to speed up the pace at which its quantitative easing programme is wound down over the coming months even before it was revealed that U.S. inflation topped six percent in October.

As a result investors and analysts were quickly convinced that the Fed would be likely to announce such steps as soon as its December meeting with a view to working itself into a position whereby it could begin to lift U.S. interest rates much earlier in 2022 than had previously been guided for.

“Our economists now expect the FOMC to accelerate the pace of QE tapering and to wrap up the process in mid-March. They also now anticipate three 25bp rate hikes next year instead of two (in June, September, and December, vs July and November previously), and a two-per-year pace thereafter,” says Zach Pandl, co-head of global foreign exchange strategy at Goldman Sachs, writing in a Friday note.

The threat of an earlier interest rate lift-off from the Fed is supportive of the Dollar and could limit the duration of any Pound-Dollar rate recovery and even more so after last week’s global market sell-off in which investors’ expectations for the Fed’s interest rate next year were dialled back notably.

"There’s now under 2 hikes priced for the FOMC by the end of next year – with initial liftoff now seen in September rather than June. The BoE is now expected to move in February instead of next month," says Bipan Rai, North American head of FX strategy at CIBC Capital Markets. 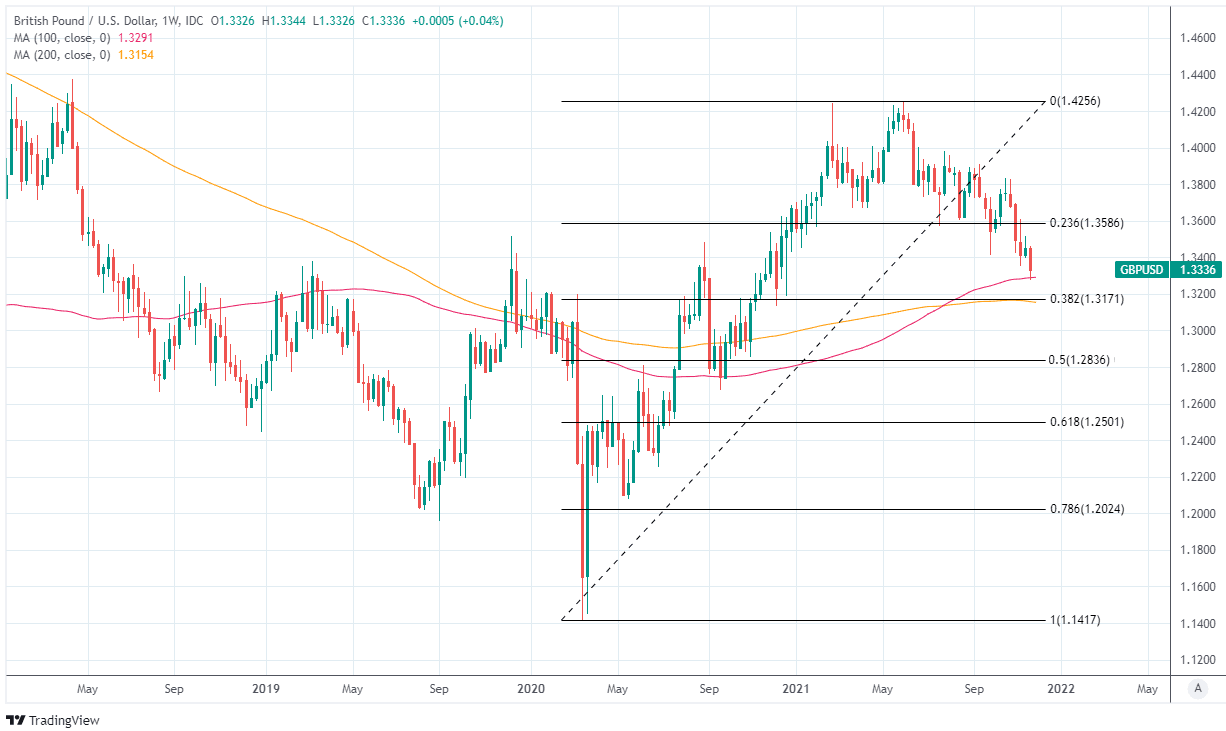 Above: Pound-Dollar rate shown at weekly intervals with major moving-averages and Fibonacci retracements of 2020 recovery indicating possible areas of technical support for Sterling.

This suggests the market may be likely to listen much more closely than otherwise to the testimony of Fed Chairman Jerome Powell when he appears in Congress on Monday and Tuesday as well as to the seven different Federal Open Market Committee members who’re set to speak publicly this week.

Of particular interest will almost certainly be policymakers’ remarks on the extent to which any further global economic disruption connected to the new strain of the coronavirus could be likely to deter them from tapering faster or raising interest rate sooner.

“For the US, where no cases of 'Omicron' have been detected thus far, this has lowered the probability of the Fed accelerating its taper, and, in principle, could lead to a slowed taper (although we think the bar for that is high),” says Christian Keller, head of economic research at Barclays.

While the risk is that any new and more virulent strain of the coronavirus could be likely to engender greater caution in Fed policymakers, it’s necessarily the case that it would be given that government efforts at containing the coronavirus have proven to be so inflationary.

With remarks from Fed policymakers aside, the highlight of the week ahead for the Pound-Dollar rate is likely to be the all-important non-farm payrolls report for November, which is widely expected by economists to confirm another month in which more than half a million U.S. jobs were either created or recovered from the coronavirus.

That would take the Federal Reserve and U.S. labour market yet one more step closer to a coveted return to full employment, making it a potentially bullish development for the Dollar and headwind for the Pound-Dollar rate.