U.S. CPI inflation rose 0.4% in the month to September according to the BLS, up on August's 0.3% advance and ahead of expectations for another 0.3% gain.

Headline inflation was driven by increases in food at home prices and energy prices. 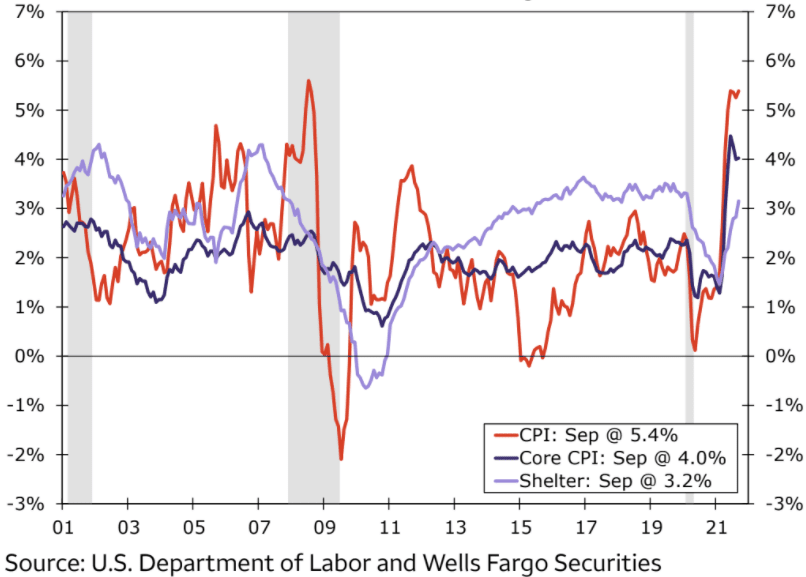 Core elements of the inflation basket rose 0.2% on the month, with strong advances in shelter, new vehicles, and car insurance only partly offset by drops in used cars and airfares.

This took the annual rate of core inflation to 4.0%.

Dollar strength was however less notable in the Pound to Dollar exchange rate (GBP/USD) which advanced by a quarter of a percent on the day to trade at 1.3620.

Despite the Pound's advance charts reveal the pair remains subdued and the post-June trend of depreciation is intact: 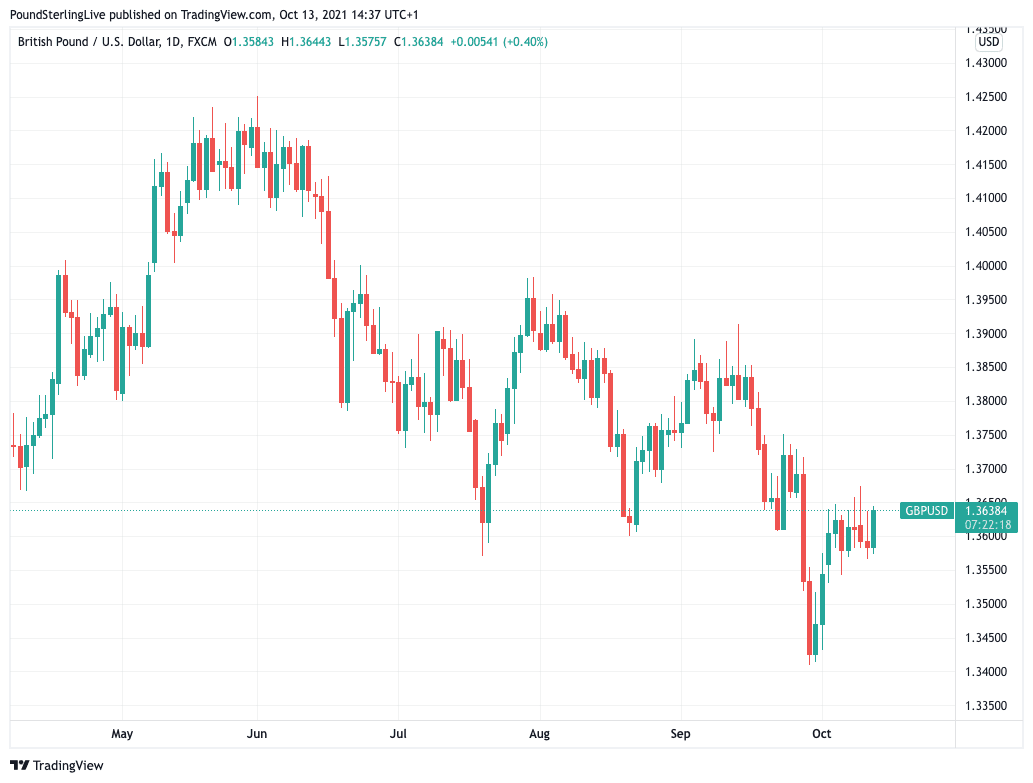 Above: Daily chart for GBP/USD showing a trend of decline in place since June.

"A sustained break above 1.365 is required to completely derail the short-term bearish trend dynamics, in our view," says Jason Hunter, an analyst at JP Morgan.

A fundamental driver of the decline in the Pound-Dollar rate since June has been a steadily building assumption that the Fed would begin its exit from quantitive easing at the end of 2021, ahead of a 2022 interest rate.

These expectations push up the yield paid on U.S. government bonds which in turn creates a pull on international capital, aiding Dollar valuations.

"The data was the latest to suggest that any moderation in high inflation would likely happen later rather than sooner, which will increase pressure on the Fed to dial back on stimulus sooner," says Manimbo.

"The narrative that’s put significant upward pressure on Treasury yields and the value of the greenback," he adds.

Federal Reserve board member Richard Clarida said on October 12 the November 03 Fed meeting will see an official asset purchase taper announcement, saying the conditions for this are "all but met" as "the ‘substantial further progress’ standard has been more than met for price stability" and "all but been met” with respect to employment".

The Pound is now recording a 0.40% loss against the Dollar for 2021, with the Greenback advancing against all the major currencies apart from the oil-linked Canadian Dollar and Norwegian Krone.

"The FX market has been playing out a continuation of the key themes already in play in recent weeks: the USD is still performing well in Broad USD Index terms," says Shahab Jalinoos, Head of FX Strategy at Credit Suisse.

In a new foreign exchange research briefing out midweek Credit Suisse say they maintain a generally bullish USD view, but see few reasons to upgrade expectations for the pace or scale of appreciation.

Analysts at Goldman Sachs are meanwhile looking for the Dollar's rally to stall, an outcome that would open the door to a more sustained recovery in the Pound-to-Dollar exchange rate (GBP/USD).

In a regular weekly currency briefing note the Wall Street bank says the Dollar's run will hit the buffers as a sell-off in global markets fizzles out and investors return their attention to growth.

Such a shift would come as investors adopt a view that a recent surge in global inflation won't deliver an environment of destructive "stagflation", instead the pro-risk "reflation" narrative will win out.

"The broad Dollar has stabilized month-to-date following its sizable rally in September, partly helped by Friday’s weaker-than-expected jobs report. Surging energy prices and the prospects for “stagflation” dominated market focus over the past month," says Zach Pandl, an analyst at Goldman Sachs.

"While inflation pressures may remain firm over the near-term, we would expect the correlation pattern across macro assets to look more consistent with reflation than stagflation," he adds.

The global Covid outlook is seen as steadily improving with case rates moving lower in decisive fashion right across the world, which in turn coincides with improved economic data.

Goldman Sachs research finds the Dollar’s performance tends to differ depending on whether higher inflation reflects better growth or other factors, such as adverse supply shocks.

Goldman Sachs strategists expect the return of 'good inflation' and hold a bias into year-end for a moderately weaker Dollar.