The Pound-to-Dollar rate entered the new week above 1.38 and with scope to attempt a further recovery over the coming days after last week’s brief slide beneath 1.3750 was met with an enthusiastic bid from the market.

The Dollar rose against most major counterparts in what was often turbulent trading for stock and commodity markets but Sterling fared better against the greenback than many others for last week overall.

The Pound-Dollar rate was not without a Thursday rally that may have had as much domestic impetus as it did international tailwinds behind it following a hearing of the August Monetary Policy Report in parliament.

Parliamentary testimony from Bank of England Governor Andrew Bailey and colleagues has shored up market expectations of an interest rate rise next year and along with the greenback’s earlier fortnight of declines has helped to lift the Pound-Dollar rate smartly from its late August lows.

The latter were not quite as low as those seen in July and so at least appear to suggest that June’s corrective setback of Sterling’s uptrend may have run its course, although nothing could be ruled out for the weeks and months ahead.

“GBP/USD is again bouncing from 1.3734/26, a near term pivot and whilst this area underpins, we would allow for recovery and a further upside attempt on the more important 1.3984/1.4018 medium term pivot,” says Karen Jones, head of technical analysis for currencies, commodities and bonds at Commerzbank, who’s a recent buyer of the Pound-Dollar rate. 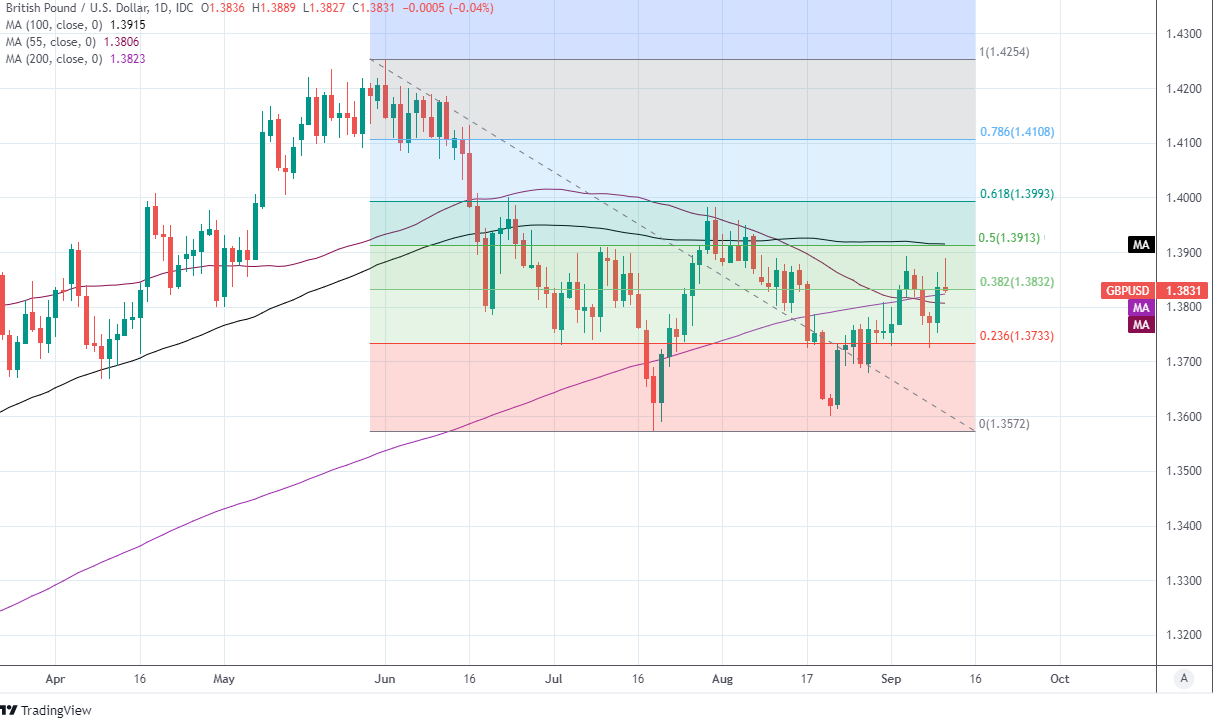 Jones advocated on Friday that clients buy the Pound-Dollar rate on dips to the 1.3780-to-1.3820 range in anticipation of a move toward 1.40 in the coming weeks, while the team at ING looks for Sterling to rise to 1.39 in the days ahead.

“Even in the event of another rise in inflation we doubt Fed rate expectations– and by extension, the dollar - will be particularly impacted,” says Chris Turner, ING’s global head of markets and regional head of research for UK & CEE.

“Other releases this week (industrial production, retail sales, University of Michigan sentiment) may also have limited impact. We are inclined to think markets may take a wait-and-see approach ahead of the very busy 20-24 Sept. week in terms of central bank activity,” Turner wrote in a note on Friday.

The UK calendar could take Sterling in either direction this week but it remains to be seen if the Dollar will find inspiration in U.S. economic highlights that include inflation and retail sales figures for August because the Federal Reserve (Fed) has tied the timing of any decision to wind down its £120BN per month quantitative easing programme to a significant recovery of jobs lost in attempts to contain the coronavirus.

“Readings in line with our estimates will have left the overall CPI up at a 13-year high of 5.4% in August, while the core CPI could have slipped from 4.3% to 4.2%,” says Kevin Cummins, chief U.S. economist at Natwest Markets.

August’s non-farm payrolls report suggested it could be October before the Fed is satisfied its conditions have been met while the bank’s emphasis on the labour market means this week’s U.S. data might have only limited implications for the Dollar.

That would in turn suggest that fluctuating investor appetite for riskier currencies may ultimately be the more pervasive influence on the greenback instead, although the Pound-Dollar rate will be impacted along the way by July’s UK job data on Tuesday and August’s inflation figures on Wednesday,

“Inflation may hog the headlines next week, if we are right in thinking that data will show that CPI inflation jumped from 2.0% in July to 3.1% in August,” says Jessica Hinds, an economist at Capital Economics. “Meanwhile, we also expect to learn next week that the unemployment rate fell from 4.7% in June to 4.5% in July and that retail sales reversed a chunk of July’s 2.5% m/m fall in August.”

Sterling might be most sensitive to any second consecutive miss against consensus for inflation, which favours an increase from 2% to 2.9% last month after falling further than was expected by the market in July. a month in which the overall UK economy almost stalled.

The Pound-Dollar rate will be interested because the risk of further sharp increases is a big part of why the BoE has signalled that it could start to reverse its crisis-inspired interest rate cuts next year. 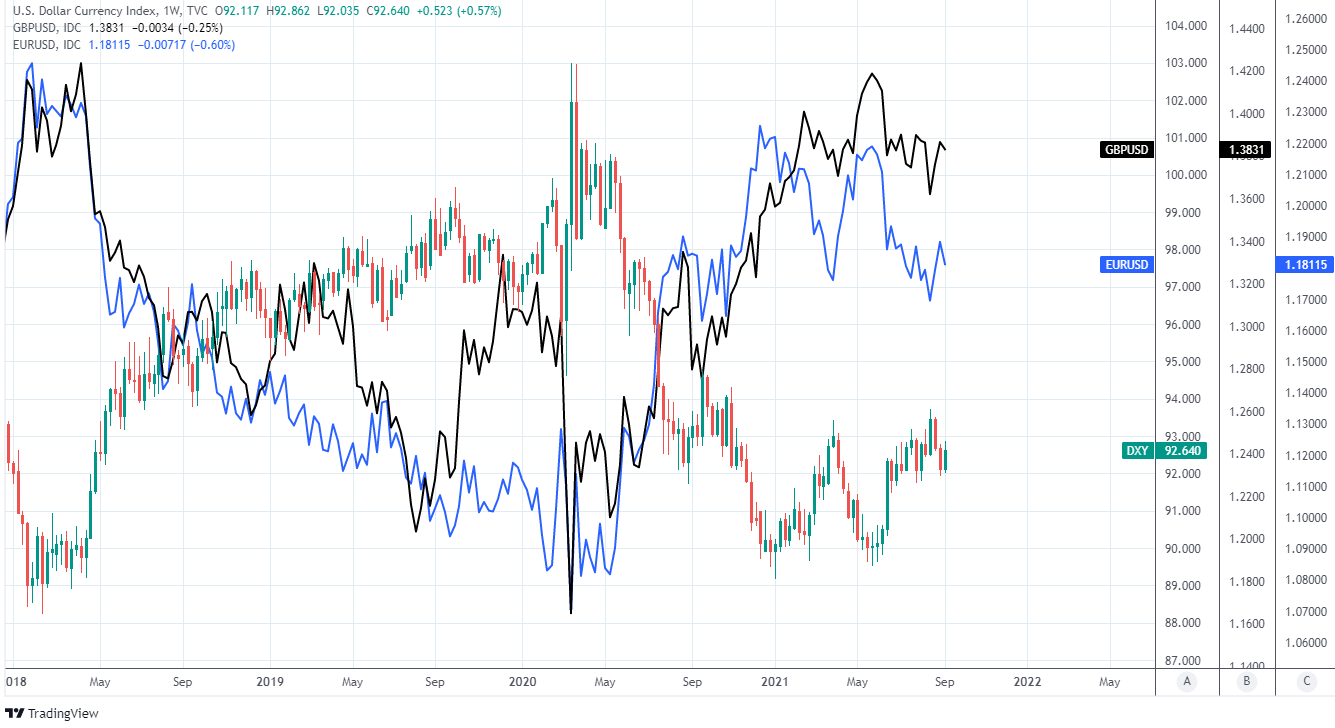 Above: U.S. Dollar Index shown at weekly intervals with GBP/USD and EUR/USD.

The Pound-Dollar rate could benefit however, if this weekend’s reports are right that Prime Minister Boris Johnson will relinquish extraordinary powers appropriated at the outset of the pandemic when they expire in September as part of plans set to be announced mid-week.

A new approach to managing the coronavirus is reportedly set to be taken this autumn, details of which came ahead of Sunday’s revelation by Health Secretary Sajid Javid that earlier plans to require vaccine passports for entry into certain venues from next month have been scrapped.

These steps would on the one hand reduce the risk of further damaging business closures while on the other giving the economy a better shot at recovery, although they also reflect a contrast with the approach taken more recently in Washington.

“It may be that vaccination mandates could worsen supply constraints already evident across the US economy, especially in sectors dominated by “Red America”,” says Martin Enlund, chief FX strategist at Nordea Markets. “There has already been talk of trucker shortages and nurse shortages.”

Enlund and the Nordea team reference one of the U.S.’ earliest city level adopters of ‘vaccination mandates’ when noting that “A New York hospital recently announced it will stop delivering babies after September 24 as too many workers have resigned over COVID vaccination mandates.”

The White House said last week “that the Department of Labor is developing an emergency rule to require all employers with 100 or more employees, that together employ over 80 million workers, to ensure their workforces are fully vaccinated or show a negative test at least once a week.”

It’s possible this and its other accompanying edicts would exacerbate what are often said to be “worker shortages” in certain sectors of the economy.