- USD rally pauses
- Allows GBP/USD back above 1.37
- Jackson Hole might be a damp squib
- But medium-term USD advance still likely say some

The Pound to Dollar exchange rate (GBP/USD) has recovered to above the 1.37 region amidst signs that the Dollar's relentless rally might reverse some of the gains recorded in the previous week.

The exchange rate has recovered from an August low of 1.3602 to 1.3744 at the time of writing, with foreign exchange analysts saying the Dollar might be due a period of consolidation ahead of the appearance of Federal Reserve Chair Jerome Powell at the Jackson Hole Symposium which is due to commence on Thursday.

"Technically, the dollar looks toppy and a correction for the DXY back below 93.0 could follow if Powell remains vague on timing and the modalities of tapering," says Kenneth Broux, Senior Strategist at Société Générale. 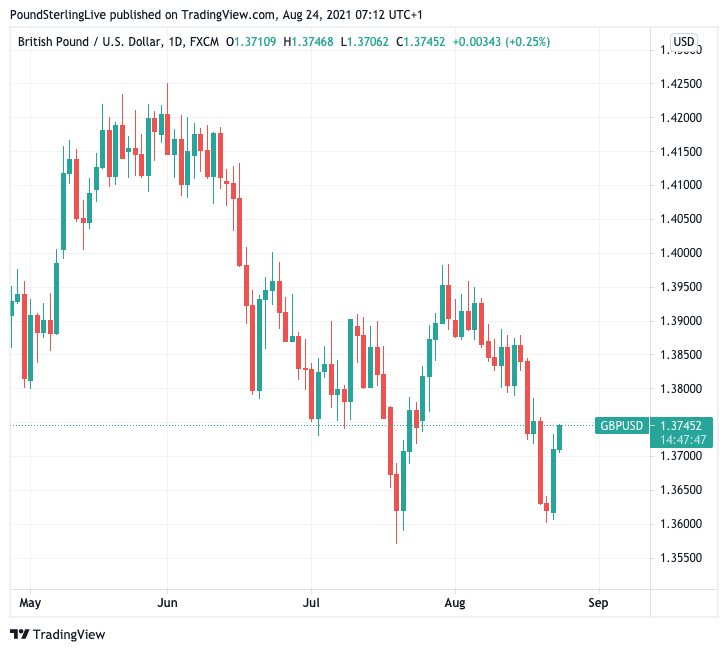 Above: GBP/USD has trended lower during August, but is finding some support just above 1.36.

The Dollar is one of 2021's best performing currency having advanced against all its peers as markets grew confident the Fed would reduce its quantitative easing programme (tapering), a move that would ultimately precede an interest rate rise.

The timing of the tapering remains one of the most important topics on financial markets and will ultimately help determine how the Dollar trades going forward through the remainder of 2021.

Anders Eklöf, Chief FX Strategist at Swedbank says he is looking for the Dollar rally to pause this week as Jackson Hole won't provide the fuel required for Dollar bulls to press fresh gains.

"Powell is unlikely to present any firm policy detail on the time frame and the pace of tapering rather elaborating around policy in general," says Eklöf.

Consensus amongst analysts is that the Fed will signal a taper at its November meeting and begin the process in December.

However, a September call cannot yet be ruled out, a development that would be on the supportive side of Dollar dynamics.

But the Kansas City Fed announced just last week it will be conducting the Jackson Hole Symposium virtually, a timely reminder that the Delta variant of Covid-19 is pushing up case rates across the U.S. which could cool the economic rebound and prompt the Fed to pause for thought.

"All in all, the USD rally looks set to take a pause this week in our view, given USD long positioning and lack of further fuel/triggers," says Eklöf.

Any pullback could therefore offer those looking to buy Dollars an opportunity to transact, particularly given the overall sentiment remains that the U.S. currency has the potential to advance over the medium-term (coming months).

The Dollar has been dominant already this year and holds gains against all its G10 peers, apart from the Canadian Dollar and British Pound, against which it is holding wafer-thin losses of half a percent. 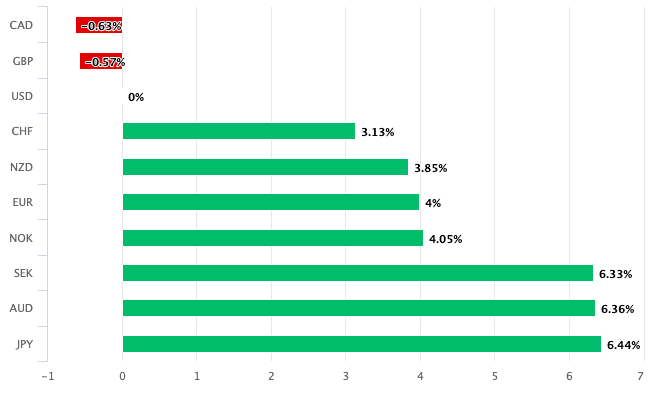 "Global growth outlook is looking soft again relative to the US due to Delta concerns. However, it is insufficient for the Fed to reverse its hawkish skew," says Wu.

Valentin Marinov, Head of G10 FX Strategy at Crédit Agricole refers to this win-win environment for the Dollar as the "USD smile".

"The USD has re-emerged as a high-yielding safe-haven currency that tends to outperform during bouts of risk aversion thanks to its superior liquidity but also does well during risk on thanks to the relative resilience of the US economy," says Marinov.

The Dollar's safe-haven qualities were on display through the course of last week amidst a global equity market sell-off, linked to fears that the spreading Delta variant would dent the economic rebound in regions such as China and South East Asia.

These fears remain relevant today, even if stock markets have rebounded.

Nordea Markets says the U.S. Dollar tends to increase when U.S. growth expectations are going up relative to the rest of the world and vice versa: 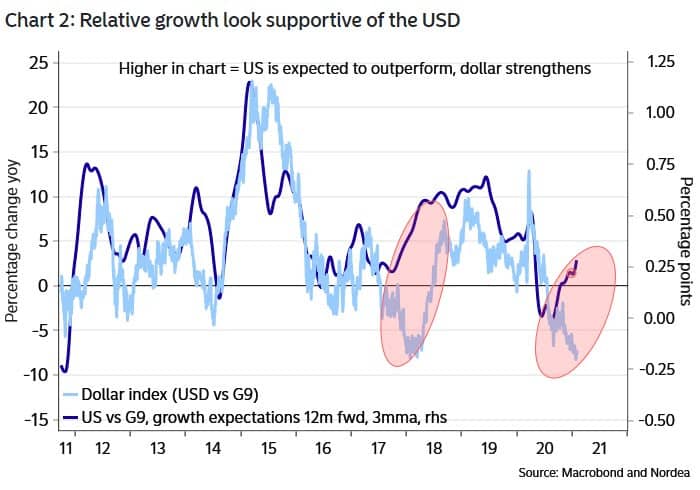 "Now that peak growth is behind us, investors are increasingly focused on future economic activity, which is favouring the US. If the USD continues to appreciate, this will be bad news for risky assets like equities and commodities," says Jeroen Blokland, a Portfolio Manager at Robeco.

Modelling from Goldman Sachs reveals that downgraded expectations for global growth has been a drag of 100-250bp on G10 currencies against the Dollar since the end of July.

"Both drivers likely need to turn for the broad Dollar to move lower on a sustained basis," says Zach Pandl, a strategist at Goldman Sachs.

"Given the large role global growth expectations seem to have played in recent G10 FX performance, we will need to have more confidence that the delta outbreaks are waning before recommending fresh pro-cyclical Dollar shorts," says Pandl.

The overall supportive background for the Dollar therefore remains intact and any pauses in the currency's advance might therefore prove fleeting in nature. 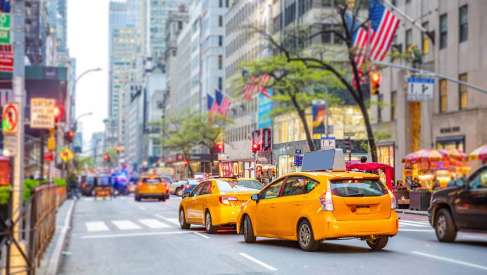