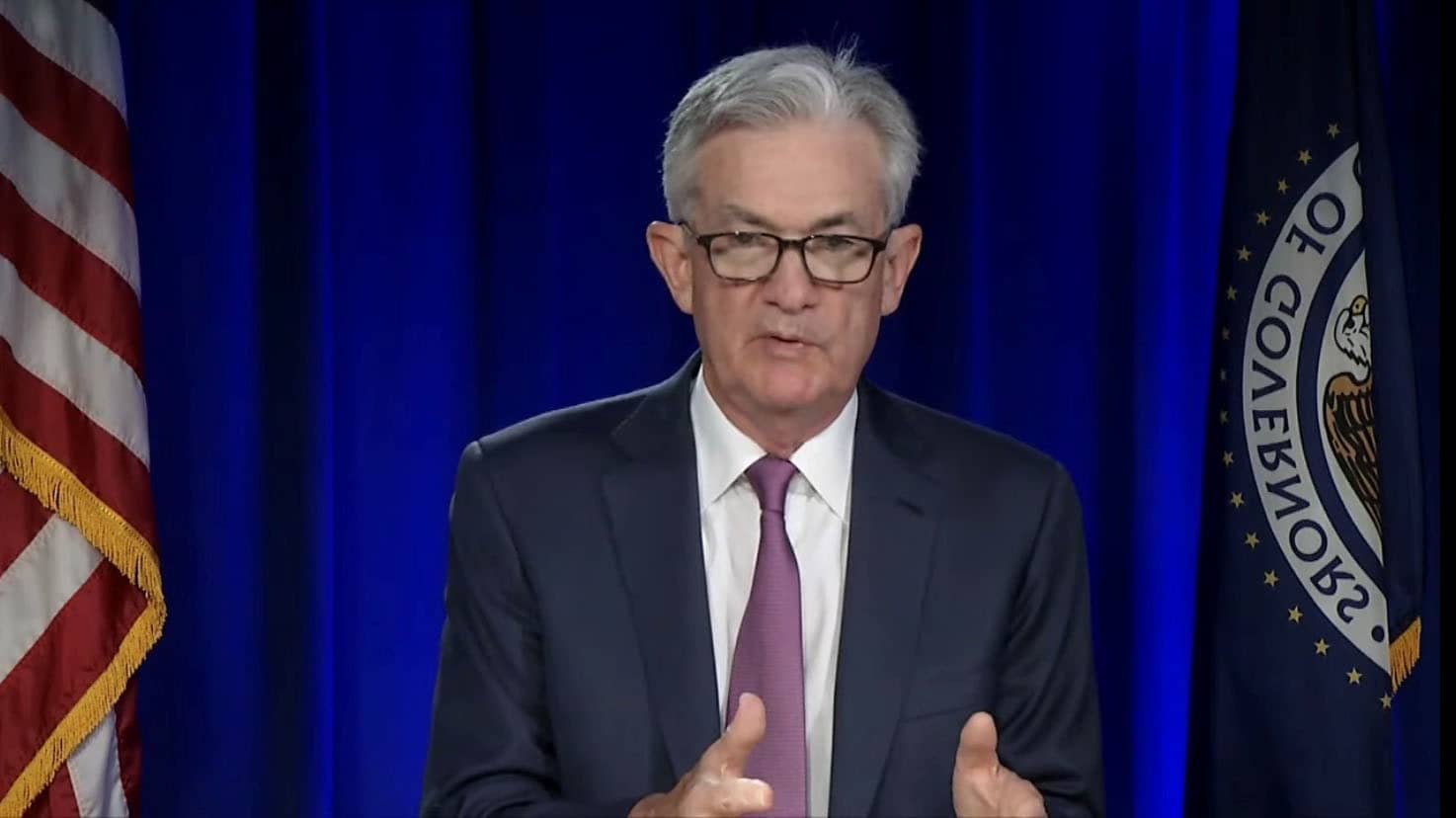 The Pound-to-Dollar exchange rate entered the penultimate session of the week probing the 1.39 handle following overnight Dollar declines that came after Federal Reserve Chairman Jerome Powell took with one hand what the bank itself had previously appeared to give with the other.

Dollar exchange rates had rallied following Wednesday’s Federal Reserve (Fed) monetary policy decision but were quick to reverse onto a southbound highway by the time that Chairman Jerome Powell got to taking questions from reporters in the press conference just more than half hour later.

“So what would substantial further progress mean? I’d say we have some ground to cover on the labour market side. I think we’re some way away from having had substantial further progress toward the maximum employment goal. I would want to see some strong job numbers and that’s kind of the idea,” Chairman Powell told Steve Liesman of CNBC News in the press conference following Wednesday’s decision. 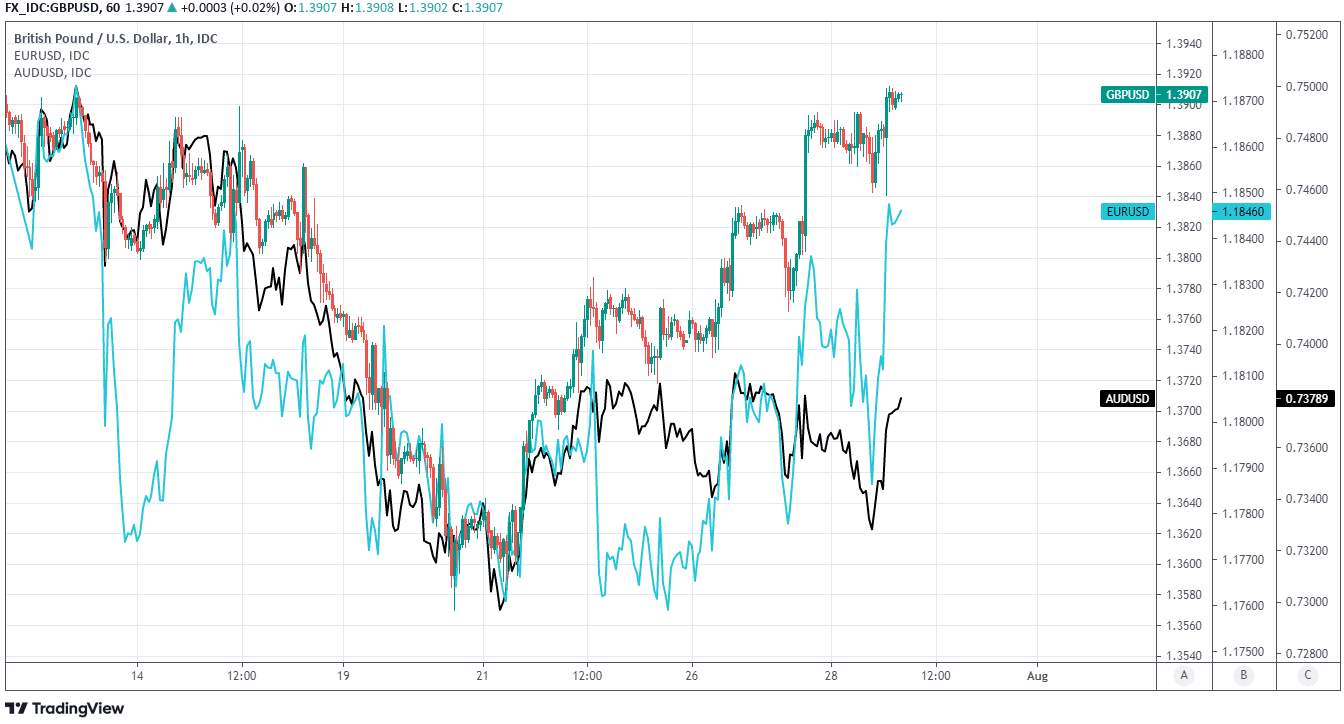 Above: Pound-to-Dollar rate shown at hourly intervals alongside EUR/USD and AUD/USD.

The Dollar was already paring its earlier rally before Powell began to take questions but the mere tempering of earlier gains turned to a modest sell-off for the greenback and a rally for some other currencies soon after the Federal Open Market Committee Chairman’s words pulled a rug from under the feet of those who’d chased the U.S. unit higher following the bank’s formal policy decision.

“Last December, the Committee indicated that it would continue to increase its holdings of Treasury securities by at least $80 billion per month and of agency mortgage‑backed securities by at least $40 billion per month until substantial further progress has been made toward its maximum employment and price stability goals. Since then the economy has made progress toward these goals, and the Committee will continue to assess progress in coming meetings,” the statement reads, in reference to the Fed’s $120BN per month quantitative easing programme.

The Fed sends a hawkish signal indicating that tapering is around the corner. EUR/USD moves below 1.18, US stocks are declining and US yields (especially 2-5 years) are moving higher on the back of the more-hawkish-than-anticipated message pic.twitter.com/ItV8zZYopp

It's fair to say that Fed Chair Jerome Powell sounds much less hawkish at the press conference. Guess disagreements are growing within the FOMC? Or, perhaps, we are misinterpreting the FOMC statement (guess @PriapusIQ would argue that ;D) https://t.co/gta4bOxKgg

Driving price action was seemingly the ebb and flow of evolving expectations around when the Fed is likely to announce a plan to begin winding down its bond buying programme in what would be a precursor policy step toward an eventual interest rate rise.

“The Fed probably needs another 1-2 strong payroll reports before achieving substantial progress on the labour market. We still see the actual taper to begin in end-2021 / early 2022,” says Philip Wee, a strategist at DBS Group Research.

Many analysts had come to view September as the most likely point at which the Fed's tapering decision would be made and details communicated, although some had most recently even suggested that Chairman Powell could perhaps announce something next month at the annual Jackson Hole Symposium.

Powell’’s remarks at Wednesday's press conference appeared to make clear, however, what was already alluded to in the Fed’s formal statement; that at least one more meeting is necessary before it could make the call.

To the extent that this is the correct interpretation it would suggest the bank is unlikely to announce anything before November, given the next meeting of the Federal Open Market Committee is not until September, with November’s following on after before the year ends with a final get-together in the middle of December.

“The lack of urgency to start tapering pushed down the 10y US treasury yield and weakened the dollar against the euro,” says Philip Marey, a senior U.S. strategist at Rabobank.

While Chairman Powell noted that the U.S. economy is currently seeing its strongest growth rates for decades and acknowledged above-target inflation rates - which the bank is charged with managing - he also reminded that repairing the damage done to the job market by coronavirus containment measures is one half of the Fed’s mandate and a key ingredient for medium and longer-term attainment of the bank’s 2%-average inflation target.

The Pound-to-Dollar rate was almost a harbour of tranquility in the price action that followed Wednesday’s decision and press conference, with rallies seen mainly in low-yielding currencies like the Euro, Yen and Swiss Franc.

Sterling entered the Thursday session above 1.39 against the Dollar but facing resistance from its 100-day moving average and the 50% Fibonacci retracement of its June decline on the charts.

“Sterling is the best performing G10 currency so far this week, as it detached from global risk appetite dynamics and may have been buoyed by a slowdown in UK Covid-19 cases, which is raising hopes that the government’s decision to lift almost all restrictions may prove to be a sustainable approach,” says Petr Krpata, chief EMEA strategist for FX and interest rates at ING.

“Indeed, GBP is heading into next week’s Bank of England meeting with a balanced positioning, which may be allowing some hawkish speculation to emerge,” Krpata adds. 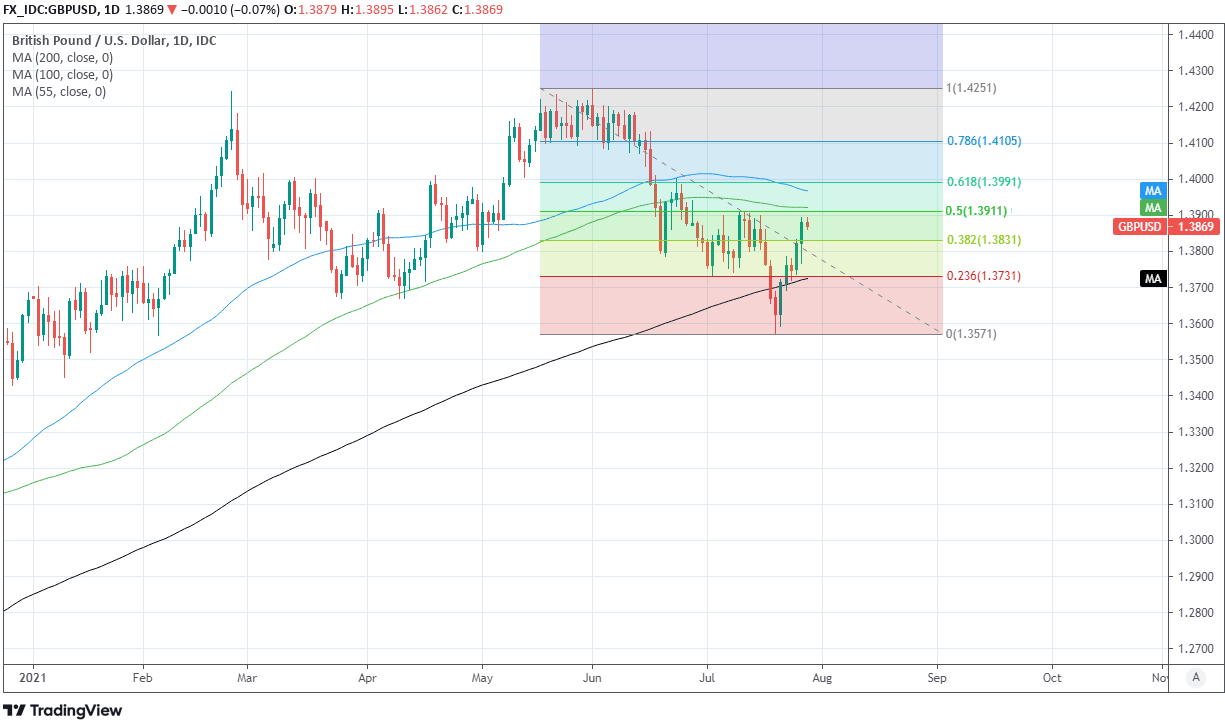