Dollars were sold widely with only small European currencies like the Polish Zloty, Swedish Krona and Russian Rouble ceding ground to the greenback, while all other majors furthered already handsome gains for the month.

The Dollar Index retreated, aided by strong gains for the Euro and Pound Sterling, which collectively account for around two thirds of flows measured by the ICE barometer. Losses built alongside declines for U.S. government bonds, which saw yields rise to three-month highs as prices hit their lowest levels for the same period, although the greenback’s downfall may even have been partly the result of those increases in yields.

“The market is very headline driven as stimulus talks continue and we approach elections. The broad based USD is sold against most of G10,” says Bipan Rai, North American head of FX strategy at CIBC Capital Markets. “The Senate is expected to revote on (and pass) the $500bln stimulus plan from last month, which does NOT include another round of stimulus checks for households.” 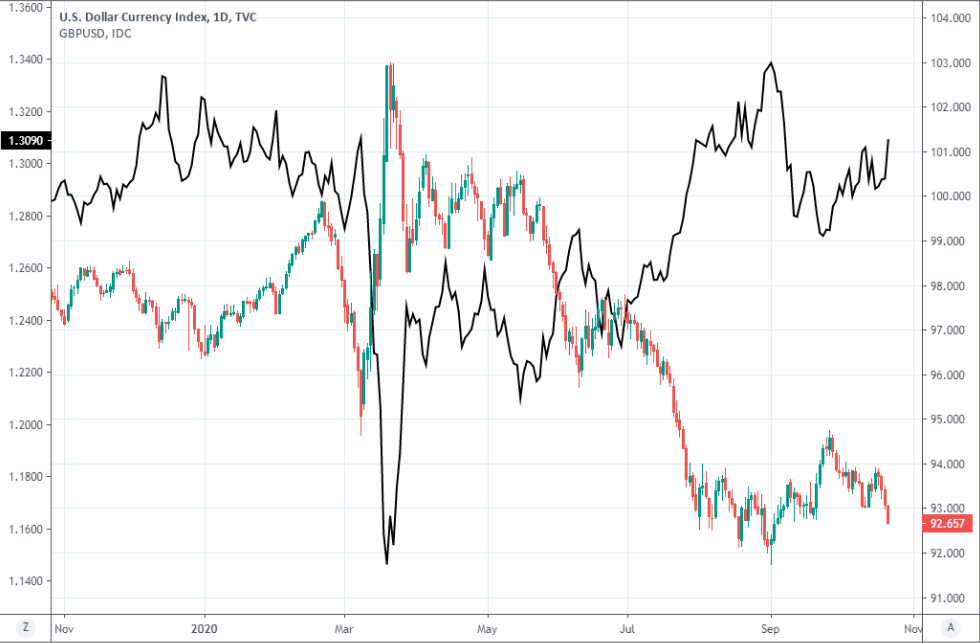 Rising yields denote bond sales, which have picked up in recent months while Washington lawmakers have argued about the preferred size of another household financial support package that remains in the pipeline ahead of November’s presidential election.

Much has been made of the potential economic fallout that could result from the end of July lapse of emergency welfare benefits provided to households by the bipartisan CARES Act, the expiry of which stoked fears of an imminent crunch in consumer spending and the economic recovery.

CARE Act funding was substantial after all, given that it offered all Americans who pay taxes but earn less than $75k a one-time payment of $1,200 plus an additional $500 per child, but it transpires that the question of whether or not further funding is provided could matter more for the Dollar than economy.

“The level of retail sales in September stood 4.2% above the February pre-Covid level, a much bigger increase over these seven months than we would have expected absent the pandemic. It's hard to think of a clearer illustration of the power of the cash flow provided by the CARES Act, given that payrolls are still some 10.7M lower than before the virus struck,” says Ian Shepherdson, chief economist at Pantheon Macroeconomics. “People did not spend all the stimulus cash; the saving rate has dropped from its peak but it remained at 14.1% in August, almost double the pre-Covid trend.” 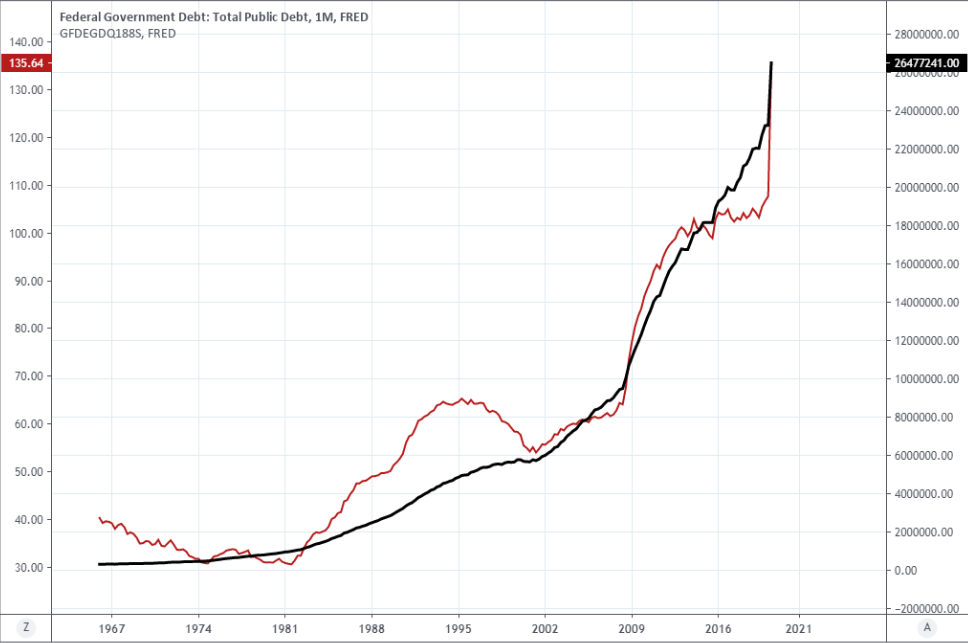 The Dollar and negatively correlated stock markets have been fixated on a running commentary emerging from the Washington lobby of late, seeking to gauge the ever fluctuating prospects of a bipartisan agreement to furnish households with more cash, and seemingly because of the economic stakes.

"Everything’s going right for euro/dollar so far this week and while some are now arguing that yesterday’s strength come from the record breaking demand for the EU’s SURE bond issue (233BLN vs 17BLN raised), we’d argue that there have been other more important, non-Euro fundamental, factors in play…namely large topside EURUSD option expiries and broad USD selling against CNH, JPY and GBP," says Eric Bregar, head of FX strategy at Exchange Bank of Canada. "We disagree strongly that what we’re seeing here is simply based on continued “US stimulus optimism”.

Pantheon’s Shepherdson cites a range of figures for thinking that American households could actually have enough cash to finance “a blockbuster holiday spending spree,” without breaking the bank.

Among those figures are a household savings rate that remained in the doubled digits in August and other data that indicates households’ savings and current account balances increased by $1.8 trillion between February and September, leading to $1.1 trillion of “excess savings”.

“The third quarter ended with a bit of a bang for retailers, with sales rising strongly, even in the woebegone department store sector. The apparent loss of momentum in July and August reversed,” Shepherdson says. “What matters here is that people have saved a great deal of money since Covid began.” 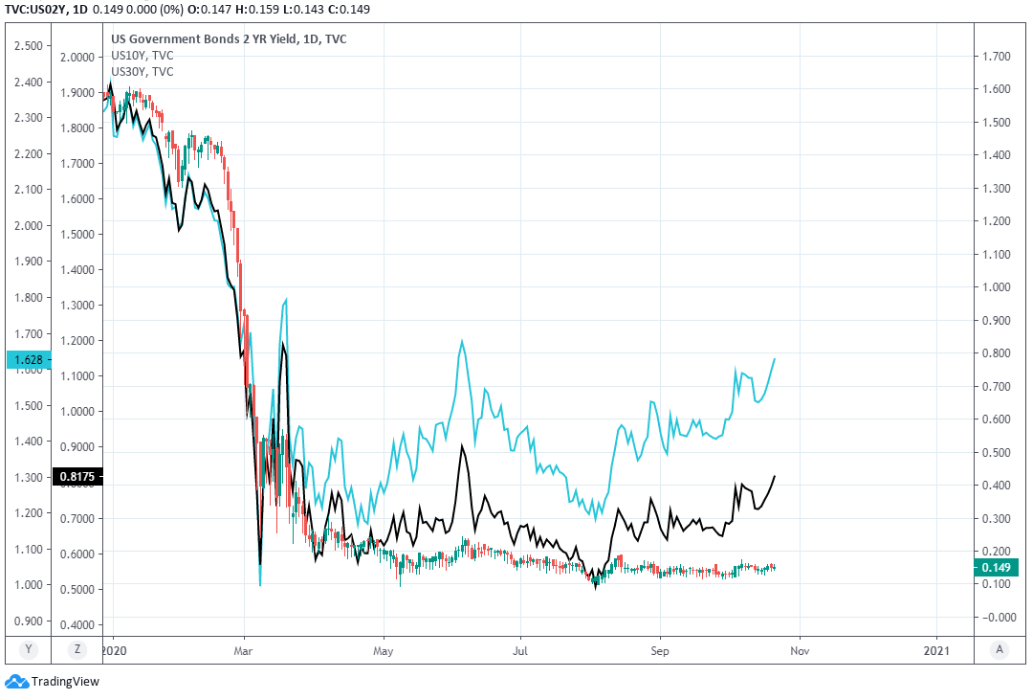 Shepherdson says around 45% of “excess savings” appears to have originated from the CARES Act and that households now have enough to finance two thirds of any one quarter’s total retail spending even if their incomes fell to zero.

In other words, households are not short of cash and so if there are any risks to consumer spending and the economic recovery in the final quarter, they don’t result from cash-flow problems.

Pantheon says that instead, the single greatest threat to spending and the economy remains the coronavirus given that irrespective of whether states return to ‘lockdown’ or not, the second wave has the potential to discourage activity and keep consumers away from the shops.

Put differently, the ongoing pre-election push in Washington to agree a bipartisan aid package for households could matter much more for the Dollar outlook in the short-term than it does the economic recovery.

"We get the sense that markets are still holding out hope for a deal. We judge that based on the fact that USD short positions haven’t pared as quickly as we’d have envisaged, UST yields are rising and that equities are still consolidating. We do think that we’ll get another stimulus package eventually – just not before the election. And even then, it might require a stretch of terrible data/bad news before we do," CIBC's Rai says. 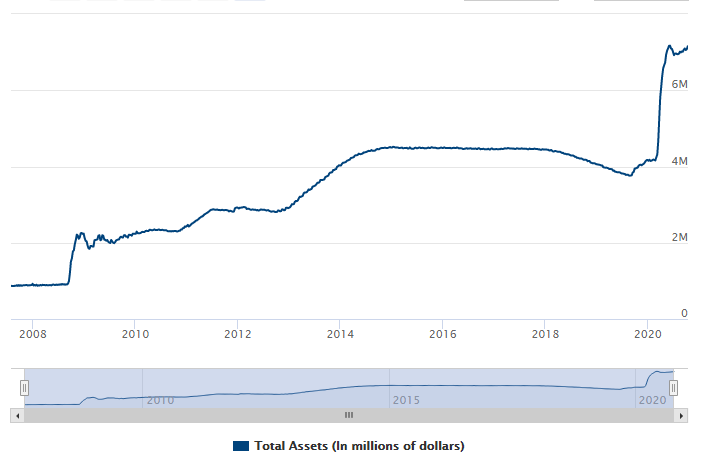 U.S. policymakers have led from the front in at least some respects in response to the pandemic, legislating for trillions of Dollars in loans, loan guarantees and grants for both companies and households, backed by a Federal Reserve (Fed) that has created an unprecedented amount of new currency in order to facilitate such extraordinary funding needs.

But this has come at a cost to U.S. bondholders and the once-runaway Dollar because large spending programmes have necessitated record low bond yields that have crushed investor returns and compensation for risk while lifting the U.S. budget deficit into the double digits. Most countries elsewhere in the world are running double digit deficits in 2020 but in the wake of 2018’s tax cuts, the U.S. deficit is expected to remain elevated for longer than others.

“The US dollar weakened yesterday on the same day that US yields rose to new highs, with much of the latter coming somewhat oddly overnight in the Asian session. The narrative driving this is apparently that stimulus will either come now or massively so later (under presumed Democratic clean sweep as odd solidify in that direction) and that this will drive US inflation rates higher and real rates lower,” says John Hardy, head of FX strategy at Saxo Bank. “The fact that US yields are moving independently of yields elsewhere is a bit novel.”

This largesse and accompanying deterioration of creditworthiness, combined with election uncertainty and market expectations for a robust economic recovery elsewhere in the world, have pulled the rug out from under U.S. bond markets and the Dollar in recent months.

For the time being at least, the Dollar and bonds could be denied a recovery for as long as deficits remain where they are, the political situation remains as uncertain as it is and so long as the economic grass on the other side of the world continues to appear greener than in the U.S. 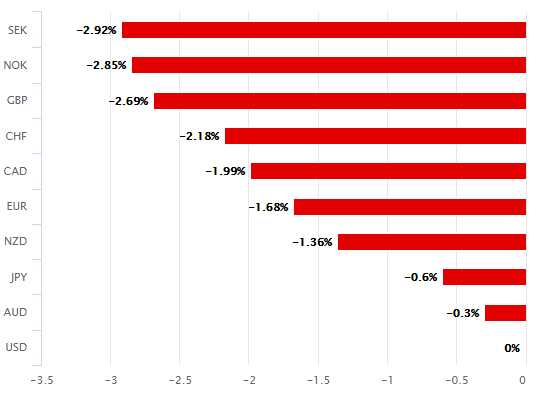