The U.S. economy's sharp rebound from the slump of the covid-19 lockdown continues with the country's services sector roaring back to life in June, according to the ISM non-manufacturing index which was updated on Monday.

The index reached 57.1 which is well ahead of the 50.1 expected by markets and a significant improvement on May's 45.4.

A reading above 50 signals growth and therefore suggests the U.S. economy's services sector is expanding once more, which has aided the positive investor sentiment at the start of the new week.

In the wake of the numbers stocks are on the up and building on their earlier gains, while the U.S. Dollar was firmly on the back-foot alongside other 'risk off' currencies such as the Yen and Swiss Franc.

"While the survey was conducted before the latest flare-up in case counts, the service sector was coming back online in a remarkable fashion," says Tim Quinlan, Senior Economist at Wells Fargo Securities, adding the shape of the recovery was as "V as it gets". 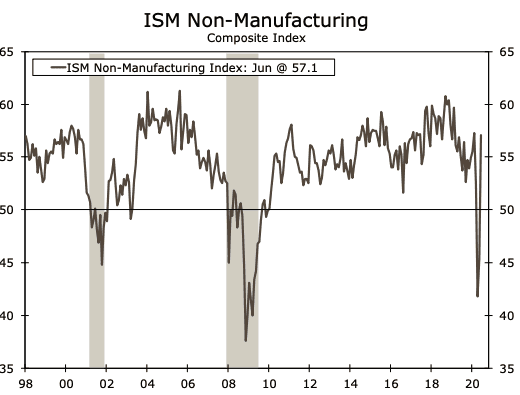 The activity/production index - a sub component of the report - shot higher to record a 15-year high of 66.0.

However, the message from the ISM is that employment continues to contract with the the employment component reading at 43.1, which is significant considering the services sector accounts for close to 80% of the country's workforce.

"Employers will need to see a smoother re-opening before hiring picks up meaningfully," says Quinlan. 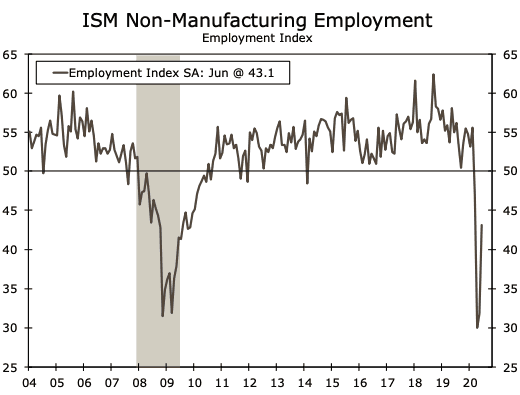 Other details of the report show supplier deliveries fell almost 10 points and orders picked up meaningfully to 61.6, even order backlogs moved into expansion territory.

"There are signs that the worst of the impact from the virus and related lockdowns is fading," says Quinlan.

"Wall Street has returned to work with a bang, rallying sharply and led of course by tech stocks. The V-shaped recovery narrative was bolstered by the huge beat in the ISM non-manufacturing survey, which surged firmly into expansion territory for the first time in four months," says Chris Beauchamp, Chief Market Analyst at IG.