The Dollar Index cemented its grip on an important support level Tuesday as major currencies ceded ground to the greenback after industrial production figures disappointed investors in the aftermath of a solid retail sales report, although technical analysts see only limited upside for the U.S. unit.

Dollars were in demand as risk currencies crumpled in the wake of disappointing industrial production data for the May month that saw the greenback recover its footing against large index constituents like the Euro and Pound.

That followed better-than-expected retail figures which had encouraged a short-lived stabilisation for riskier currencies and momentary weakness in the Dollar.

"The US industrial sector came back with a whimper in May as economies reopened, suggesting that the recovery in activity won't be as swift as the decline. Industrial production rose by only 1.4%, leaving output 15% below its pre-virus level and also 15% lower than year-ago levels," says Katherine Judge, an economist at CIBC Capital Markets. "As states began to reopen their economies, households reopened their wallets. Retail sales rose by a much better than expected 17.7% in May, more than double the 8.4% expected by the consensus, while the prior months' decline was revised to a not-quite-as-bad -14.7% (from -16.4% originally)."

Gains over European and commodity currencies offset the greenback's losses to the safe-haven Japanese Yen and Swiss Franc, which were also in demand following the poor data and amid an increase in geopolitical tensions. Retail sales figures indicate scope for a quick return to something like normal levels of activity, although the sustainability of this is called into question by the absence of a recovery in the production sector of the economy. 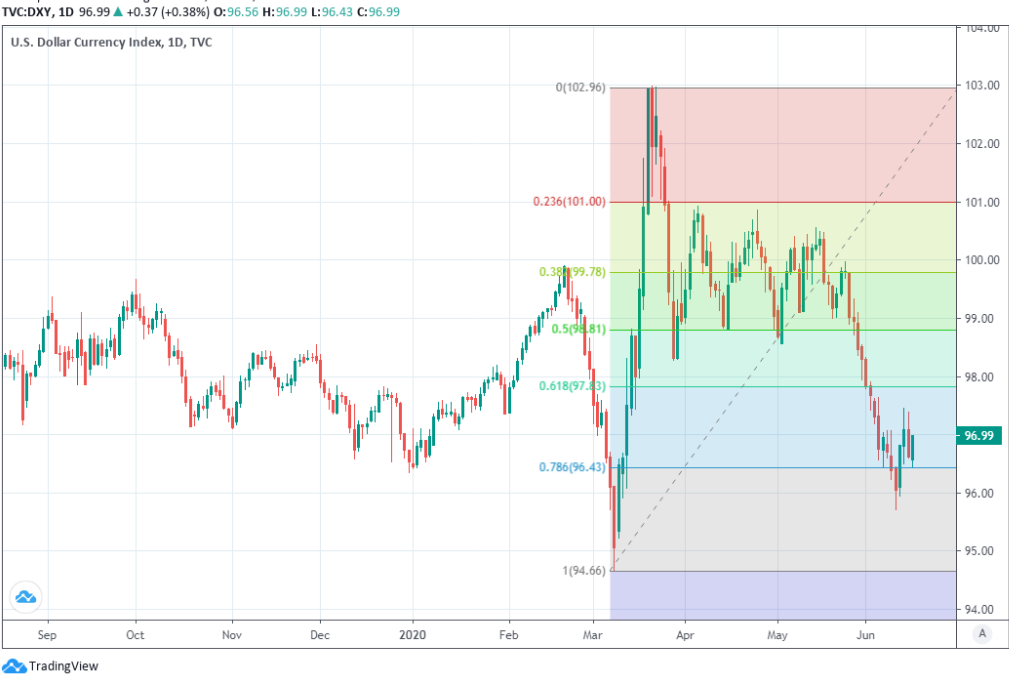 "The corrective rebound has reached the 23.6% retracement at 97.43. There is scope for this to extend to the 98.27 March low. We would expect the market to fail between here and the downtrend at 99.11," says Karen Jones, head of FICC technical analysis at Commerzbank. "The US Dollar Index rebound is viewed as corrective. Downside targets remain 93.88 then 91.40."

Price action came amid increased geopolitical tensions in some parts of the world, most notably between India and China after a border dispute between the two erupted in clashes that were said to have resulted in fatalities for both sides, while tensions were rising between North and South Korea too.

Tensions undermined the tentative improvement in risk appetite fomented when the Federal Reserve (Fed) significantly expanded the scope of its corporate debt help programme, details of which came alongside reports of a the White House will seek support for a large infrastructure spending package in the U.S.

This was after investor conviction was tested at the opening of the week by fears of a second wave of coronavirus infections in China as well as the U.S., with Beijing racing to contain a cluster of outbreaks in the capital city Beijing while a handful of reopened U.S. states have continued to see sharp increases in new infections each day.

"The key point here is that it's now pretty easy to imagine a full reopening of the economy taking all components of retail sales back to their pre-Covid level by, say, July," says Ian Shepherdson, chief economist at Pantheon Macroeconomics, of the earlier retail data. "After July, much depends on what Congress does to the enhanced unemployment benefits, currently scheduled to end at the end of the month. If that happens, with millions of people still unemployed, sales will drop back."

Tuesday's retail data indicates that key components of the U.S. economy could rebound quickly from the historic coronavirus slump, although its not the first. May's non-farm payrolls report took the market by surprise when it showed the economy creating 2.5 million new jobs, defying expectations for a net -7.7 million jobs lost. However, the industrial production figures for that month are a reminder that some other important cogs in the economy could require longer to get back to where they were before.

Fed Chairman Jerome Powell said Tuesday there is still significant uncertainty over the timing and strength of the economic recovery that's widely believed to have begun with the reopening of some state economies in May, which is important because hopes of a global economic recovery that resembles the letter V when plotted on a chart, are the foremost motivation for blockbuster gains seen in stock markets since March.

"The FX market looks a little bit confused now however as it weighs positive US Retail Sales data (USD negative), negative US Industrial Production figures (USD positive) and headlines claiming Dexamenthasome as a “major breakthrough” when it comes to COVID-19 treatment (US yield positive and therefore USD positive)," says Eric Bregar, head of FX strategy at Exchange Bank of Canada. 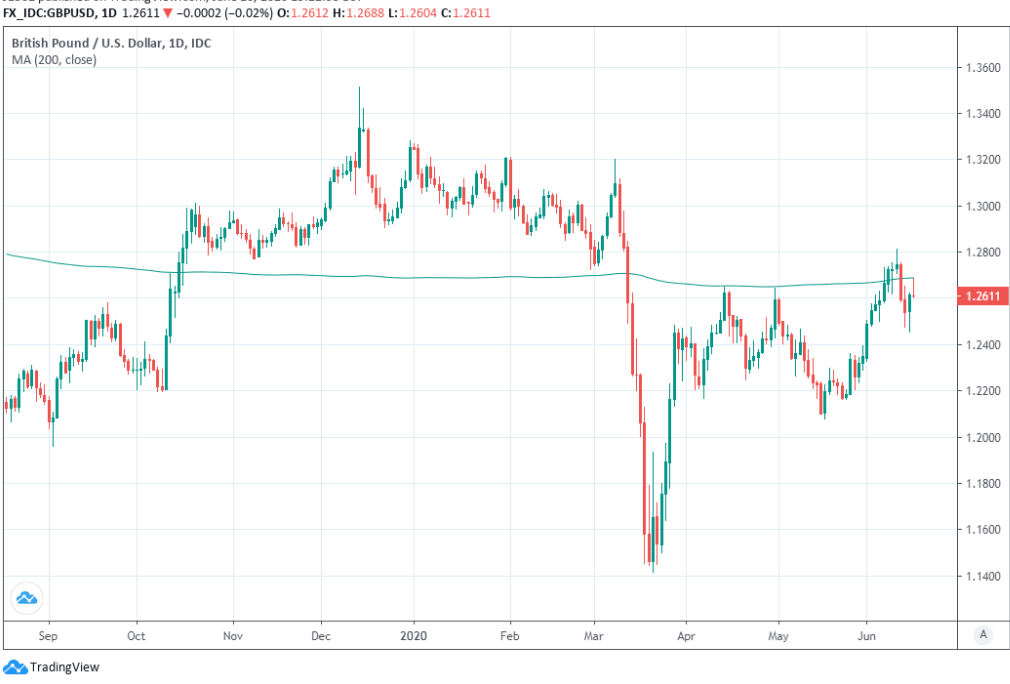 Above: Pound-to-Dollar rate shown at daily intervals, fails to reclaim its 200-day moving-average.

Stocks have increasingly looked to draw a line under their March coronavirus losses and have been the dominant driver of the ten-week recovery in many risk currencies including Pound Sterling, which was faltering in noon trade Tuesday, but they could be undermined in the weeks and months ahead by any further data that conflicts with the market's V-shaped recovery hopes.

Sterling had been higher against all major rivals other than safe-havens on Tuesday but was sent into retreat by the U.S. industrial production data, culminating in the appearance of a rejection by the 200-day moving-average on the charts. But it could be further undermined in the latter half of the week by the Bank of England (BoE), not to mention geopolitical tensions and incoming coronavirus infection numbers from the U.S. and China.

Previously, Sterling had been buoyed by Prime Minister Boris Johnson's bullish statements on the outlook for trade talks with the EU following a Monday meeting with European Commission President Ursula Von der Leyen. That performance also followed a better-than-expected jobs report for May that saw the unemployment rate defy the volcanic increase in numbers of individuals claiming welfare benefits or furlough payments.