- USD hits the ropes as EUR and GBP join rally in risk currencies.
- Comes as investors trade positives of global economic recovery.
- Give short-shrift to Chinese sabre rattling over virus, Hong Kong.
- Some analysts say USD and risk moves to endure for time being.

Risk assets rallied and the Dollar, Yen and Franc retreated in sympathy with an improvement in market sentiment with investors showing increased confidence that the global economy was exiting lockdown.

"A positive start to the week, with global equities rallying and the USD weaker as Covid-19 headlines continue to show improvement – Japan have exited a state of emergency and PM Abe announced a second budget aimed at providing further fiscal stimulus," says Robin Wilkin, a strategist at Lloyds Bank.

Notably, the drivers of the sentiment are quite broad-based in nature, giving rise to the view that the recovery has an increasingly sound footing.

"There are many positives for markets to latch on to: Japan ended its nationwide emergency, England will reopen non-essential shops by June 15th, whilst Dubai and Hong Kong are easing lockdown measures," says Neil Wilson, Chief Market Analyst for Markets.com. "Global stocks have begun the week on a very solid footing and taken a leg higher to set new post-Covid highs as economies start to reopen and investors shrug off the simmering tensions over Hong Kong. The Nikkei rose over 2% to its best level since early March as Asian equities made broad gains with Japan ending its state of emergency."

The U.S. Dollar maintains an inverse correlation with global investor sentiment, owing to its safe-haven status and de factor role as a global reserve currency, tending to rise when markets are selling off and fall when they are rallying.

Investors meanwhile gave short-shrift Tuesday to Chinese sabre rattling that included claims by state controlled media that the country is bolstering its preparedness for a military conflict, effectively doubling down on its pushback against calls for an international inquiry into the origins and handling of the coronavirus that's currently thought to have first escaped its borders in January.

Chinese President Xi Jingping was reported by state-ran media Tuesday to have told the military to increase its training and war preparations in the final leg of the National People's Congress meeting for 2020. The call came amid an ongoing war of words with the U.S., over both the coronavirus as well as China's attempt to give mainland security services a greater role in the policing of Hong Kong, which reignited pro-democracy protests their at the weekend. 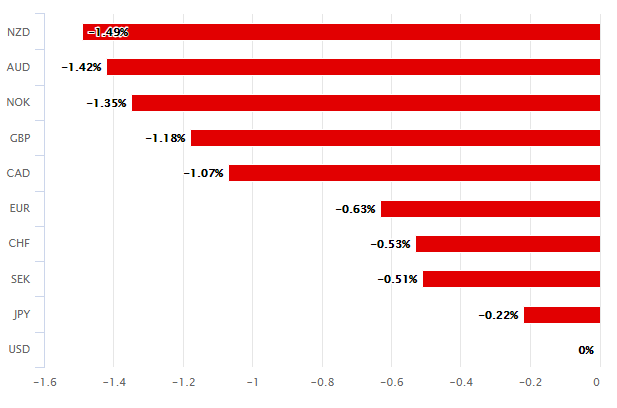 A draft decision of Chinese authorities was working its way through China's parliament Tuesday but would risk a "strong response" from the U.S. that some officials have said could include sanctions on both China as well as Hong Kong, which might threaten the city's position as Asia's pre-eminent financial centre.

"Escalating tension between China and the US is a downside risk to a global economic recovery after Covid-19," says Kelly Chen, an economist at DNB Markets. "We note that Chinese purchasing of US goods is lagging far behind the Phase-1 Trade Deal commitments. Implicitly, China will need to more than double most imports from the US this year. We do not think this is feasible."

This is all barely more than a week after China imposed market-closing tariffs on a range of Australian exports in an apparent retaliation over its campaign for a global inquiry into the pneumonia-inducing coronavirus that had infected 5.5 million globally on Tuesday. Tensions between China and other countries could yet spoil the upbeat mood but for the time being at least, investors have opted to celebrate the gradual unlocking of major economies.

"GBP/USD is worth a rethink if it breaks the post-march high at 1.2670, EUR/USD if 1.11 does but in terms of positions, we're short EUR/JPY unless we break 120 and short GBP/JPY unless 136 breaks," says Kit Juckes, chief FX strategist at Societe Generale.

Commodity-backed or otherwise risk-sensitive currencies have advanced since early last week when sentiments were lifted by U.S. biotech firm Moderna and its claim to have made progress developing a coronavirus vaccine, although Sterling and the Euro have joined the rally this week and helped tip the ICE Dollar Index firmly into retreat. They account for more than two thirds of flows measured by that particular barometer of the U.S. currency. 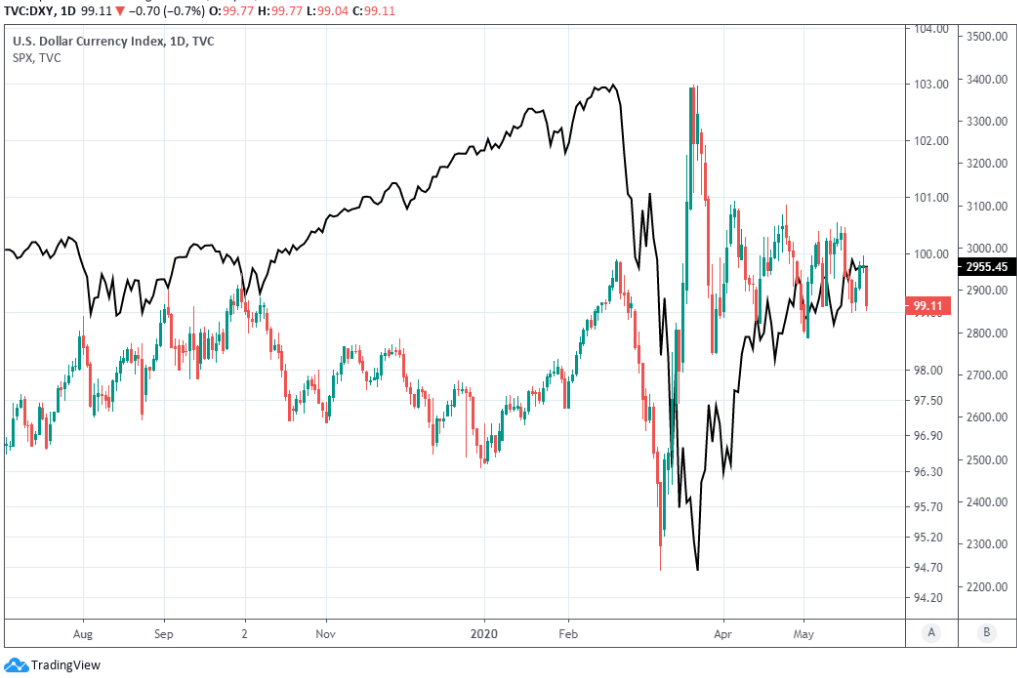 The Dollar Index had fallen more than 1% for the week by noon on Tuesday while the British and European units were up 1.6% and 0.7% respectively. This is after Prime Minister Boris Johnson set out plans for a modest but progressive easing of 'lockdown' restrictions beginning from June 01 and amid reports suggesting the European Union will soften its ambition to retain the status-quo on fishing rights in the Brexit talks.

"The fact that one of the market's top funding currencies (EUR) and its top Brexit currency (GBP) are both rallying vs the USD highlights the indiscriminate nature of today's surge in risk appetite. Put differently, these moves are certainly not ones which we would instantly look to fade," says Stephen Gallo, European head of FX strategy at BMO Capital Markets. "We're inclined to wait this one out rather than sell USDs into the moves higher in EURUSD & GBPUSD." 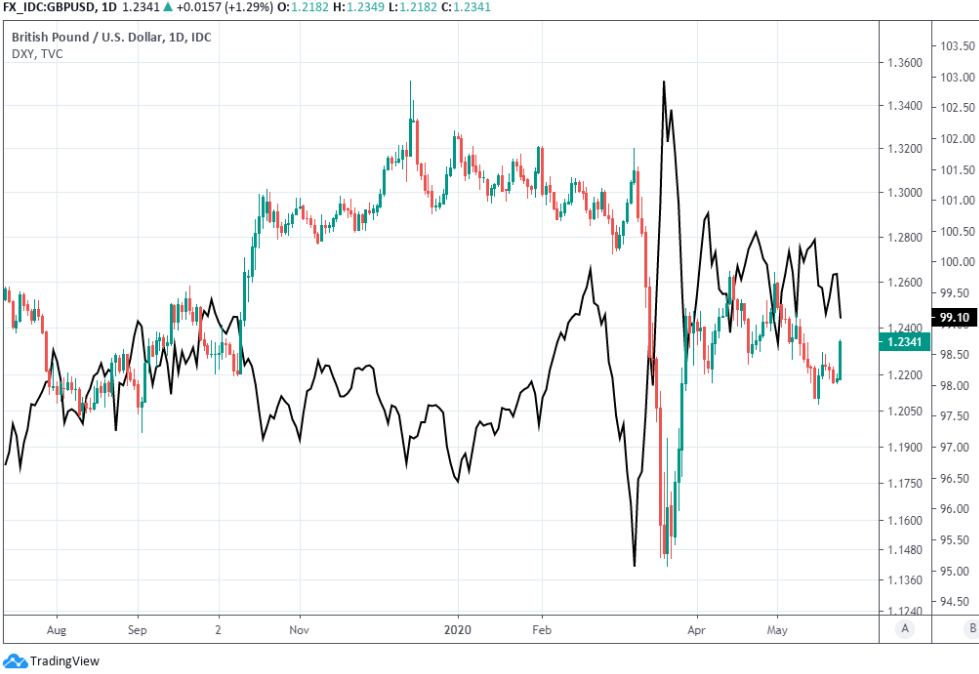 Johnson's easing of restrictions could see non-essential retailers reopen from June 15, which might lessen the risk of the services and retail heavy UK economy being left behind by developed world peers, although it remains to be determined when the pub and restaurant trade will be back in action and much depends on how soon the government can get children back to school. Plans for a June 01 return were watered down somewhat last week, with individual schools given the ability to decide themselves whether children will return to class amid protests from teachers and some parents over plans to reopen.

Sterling also nudged higher when The Times reported the EU will soften its demands on fisheries when the next round of Brexit trade talks get underway on June 01. It has so-far pursued a status-quo arrangement that would see British waters and fish stocks deemed a 'common resource' that entitles EU states to a share of annual quotas, although there are many issues blocking progress in the negotiations including some that are as significant if-not more so than disagreements over fishing. The market has been pessimistic on the outlook for the Pound and it could take a move above 1.2670 to change that.

"EUR/USD levels are still within the broad 1.08-1.10 range while implied vols have been far less excitable than other G-10 pairs. Futures markets indicate that there is a slight bias to remain long EUR at this point ahead of the Euro Commission’s proposal on the recovery fund this Wednesday. An outcome that skews toward the Franco-German proposal should lead to spot levels piercing above the 1.10 handle and moving towards 1.15," says Bipan Rai, North American head of FX strategy at CIBC Capital Markets. "We can’t emphasize enough how we’re flying blind with respect to incoming data and that paying attention to swings in sentiment surveys is where it’s at. For the consumer confidence release today – watch for any signs of basing in the headline figure." 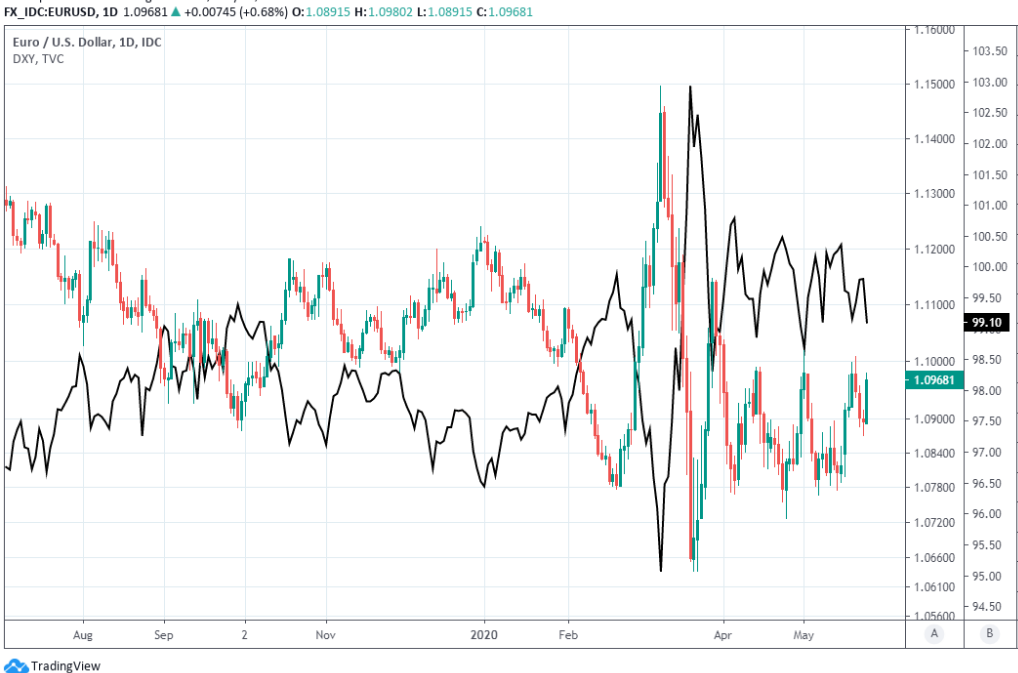 Europe's unified unit was also on the offensive Tuesday but will need good momentum to overcome resistance at 1.10 and the 200-day moving-average at 1.1011 that barred its path higher last week. Price action comes amid the risk rally and follows suggestions from European Central Bank (ECB) policymaker Francois Villeroy that further monetary easing is likely on the way and a better than expected Ifo survey of sentiment among some 9,000 German businesses.

Monday's Ifo survey of corporate sentiment suggested German economic activity may have bottomed out in April and begun to recover in May, after the barometer rose from 74.2 to 79.5 when markets had looked for an increase to 78.3. Investors will not find out what happened to the economy until late August so many are taking cues from barometers of confidence, which would typically be the first to betray any sign of recovery.

However, the Euro will also be driven in the coming days by the European Commission's answer to last week's Franco-German proposal for a coronavirus recovery fund. The original idea has already met with objections from the 'frugal' Northern members of the common currency bloc and if a compromise cannot be agreed before the June 18-to-19 European Council summit the Euro might begin to suffer as a result.

"The EUR is mounting another charge at the 1.1000 level against the US dollar as bulls hope that the recent signals from Merkel and Macron on funding a recovery package via the EU budget is a signal that the EU project is far from endangered," says John Hardy, head of FX strategy at Saxo Bank. "Happy to trade the break from a technical perspective, but preferring a combination of buying perhaps 2-month calls and a quick in-and-out on spot trades on a break."