The Dollar was reeling Wednesday as the promise of a $2 trillion aid package for American companies and households stoked global risk appetite and encouraged and unwinding of the great dash for cash that was seen earlier in March, a process that is tipped by some to continue for a while yet.

Pound Sterling rose back above the 1.19 handle against the Dollar Wednesday while most other major currencies also advanced on the greenback with the only exceptions being the safe-haven Japanese Yen and Swiss Franc, which ceded ground to the U.S. unit. This is after President Donald Trump said his administration had reached an agreement with Senate leaders on the provision of emergency support to companies and households who've had businesses and incomes disrupted by the coronavirus.

President Trump says the package is worth $2 trillion, just less than 10% of GDP, and that it will take the combined financial support offered by government and the Federal Reserve up to $6 trillion. Most notably the package includes 'helicopter money' of up to $3,000 for the average household and $1,200 for the average worker, as well as uber cheap and yet-still subsidised loans to companies who might otherwise make workers redundant. 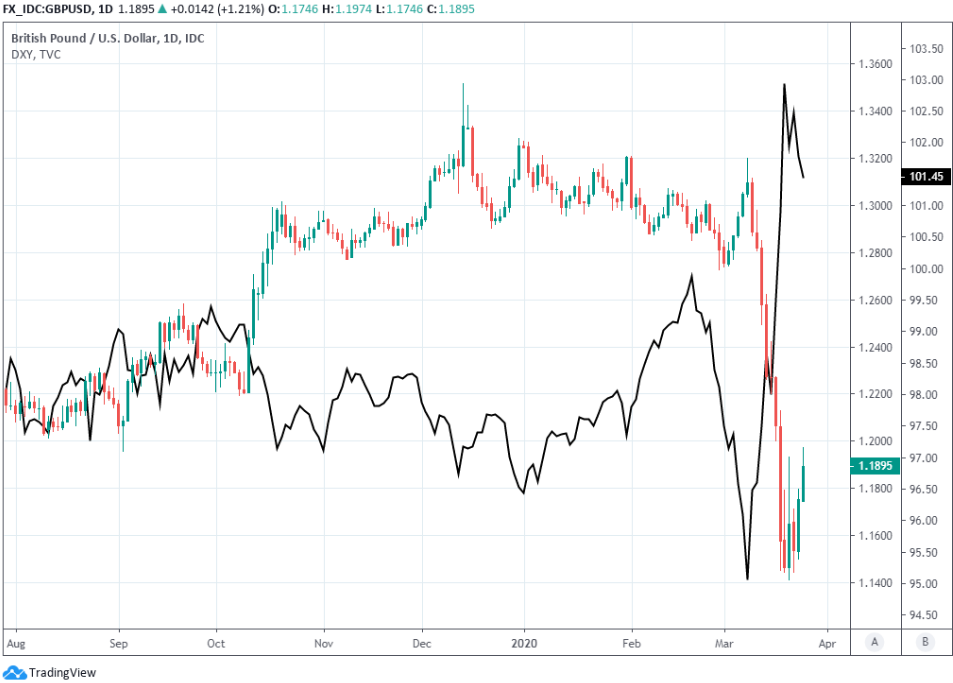 "The Treasury’s Exchange Stabilization Refund. That will be replenished. It’s important, because that fund opens the door for Federal Reserve firepower to deal a broad-based way throughout the economy for distressed industries, for small businesses, for financial turbulence. You’ve already seen the Fed take action. They intend to take more action.  And in order to get this, we have to replenish the Treasury’s Emergency Fund. It’s very, very important; not everybody understands that. That fund, by the way, will be overseen by an oversight board and an inspector general.  It will be completely transparent," says Larry Kudlow, director of the National Economic Council.

The bill, the text of which was still being drafted overnight, will be introduced in Congress on Wednesday in the hope of having it through the legislative gauntlet this week. It comes as states in some parts of America encourage citizens to stay home rather than go to work and to avoid all unneccesary social contact, threatening to deal an unprecedented blow to the economy which without action from policymakers, could do lasting damage. President Donald Trump has continued to urge keeping such self-isolation periods as short as possible, saying Tuesday he wants to "reopen the economy" by Easter.

"This is a MASSIVE package that should arrest the increase in the uncertainty premium priced into risk," says Bipan Rai, North American head of FX strategy at CIBC Capital Markets. "Over the long-term, this means that US assets (like the USD) will come under fire as the budget deficit will now easily exceed 2008 crisis levels at above 10% of GDP. That’s what you get when you have irresponsible fiscal policy during boom times (like the 2017 tax cuts)." 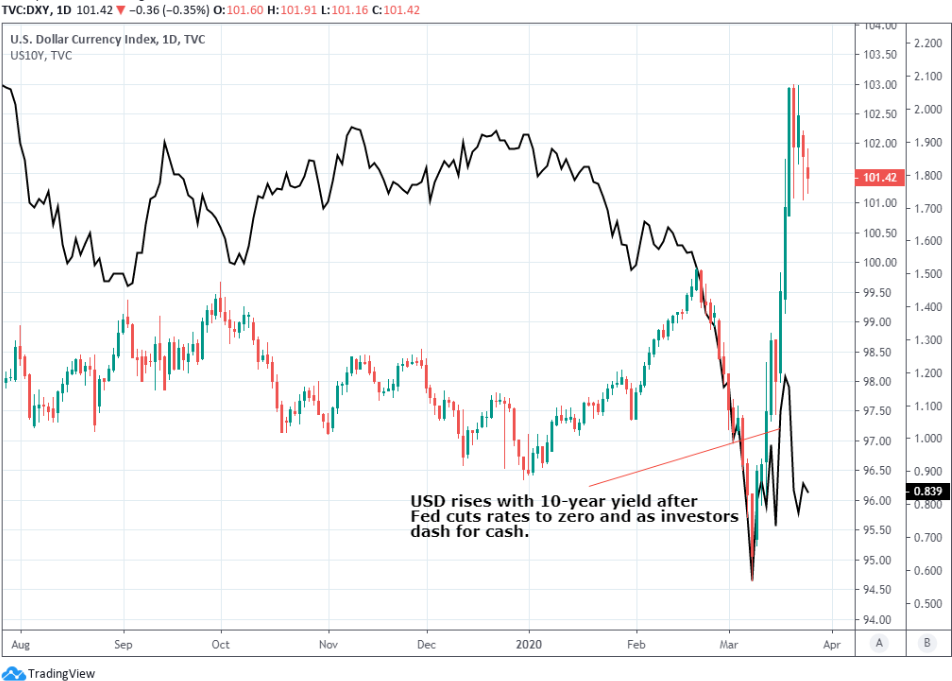 Economic aid is being doled out amid an explosion of coronavirus cases that risks making the U.S. the epicentre of the global outbreak now that growth in new confirmed cases as well as deaths has shown signs of waining in some parts of Europe. The U.S. had 55,225 confirmed cases of coronavirus on Wednesday, according to Johns Hopkins University figures, up from 42,164 the previous day, while deaths had risen to 698.

The Dollar Index had risen more than 7% in the fortnight to last Friday as investors dumped financial assets of all stripes, at times including typically safe-haven government bonds, while bidding for the only kind of cash in the world that could accomodate such a large tide of capital; the mighty U.S. Dollar. Those asset sales and Dollar buys were motivated by lots of things although the the sheer unprecedented coronavirus damage to the economy was seen as prominently among the drivers.

"Further important steps have been taken in terms of policy response and we are seeing the benefits of this in terms of declining levels of volatility with our G10 FX Volatility Index declining further," says Derek Halpenny, head of global markets, research EMEA and international securities at MUFG. "These moves are important ingredients for further USD depreciation. Further near-term USD depreciation is possible now with policy responses buying time to gauge whether economic lockdowns are helping curtail the spread of COVID-19." 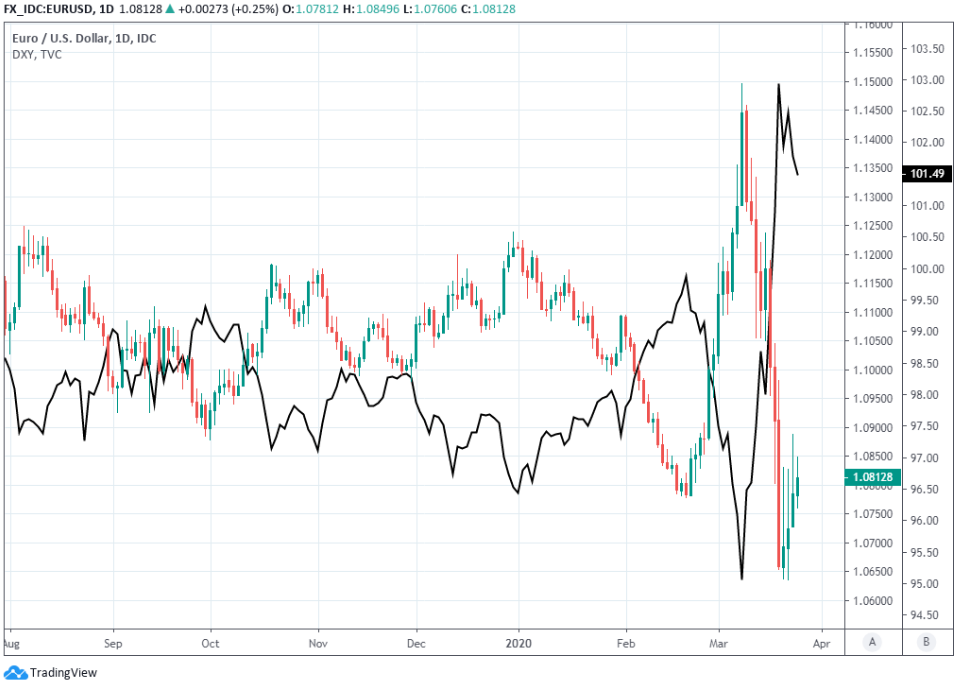 Dollar gains are being unwound now U.S. lawmakers are looking to have belatedly caught up with the international class when it comes to providing support in the form of 'liquidity' to comanies and households, the path ahead may be becoming more readily navigable for investors. However, the Dollar has declined only 1.8% from the peak set last week and some analysts are tipping it to go on falling in the short and medium-term.

Lawmakers were bought time by a Federal Reserve (Fed) that has led the cavalry at every step of the way, slashing its interest rate to nearly zero and relaunching its quantitative easing program with an initial $700bn, before declaring that to be an "unlimited" facility. It has pulled out all of the stops including by furnishing other central banks with large supplies of Dollars so they can provide liquidity to their own lenders, which can reduce international demand for the Dollar and as a result, potentially reverse the strengthening in U.S. exchange rates. The bank will feature promimently in the government's efforts to support the nation going forward too, by providing credit directly to the real economy and bolstering the lending capacity of commercial firms.

"The US dollar getting pushed back lower against risky currencies in line with the sentiment bounce – most charts have been so extended that this move could extend for a while without reversing fully the strong USD narrative," says John Hardy, head of FX strategy at Saxo Bank. "The Covid19 outbreak is seeing shutdowns spreading around the world, with India announcing a three-week lockdown after the UK did so yesterday. The scale of the US outbreak will be critical for seeing whether the rest of the country ends up in total lockdown – certainly the “15 days” that the Trump administration has discussed for a lockdown period looks unrealistically short. I have personally been locked down for two weeks already in Denmark and they have extended the measures here until after Easter, which is over two weeks away."