- GBP retreats from softer USD ahead of the Friday close.

- Amid speculation suggesting a delay to March 11 budget.

- Budget key to outlook for BoE rates in the months ahead.

- But charts matter too and are suggesting GBP gains ahead.

The Pound retreated from a softer Dollar on Friday and although much about the outlook still depends on developments in Westminster and elsewhere, the charts are suggesting a renewed march to the upside could be in the pipeline.

Sterling corrected lower against all other than the weakest of major rivals in the final session of the week amid speculation of a possible delay to the March 11 budget, although Friday's moves may also have reflected profit-taking ahead of the weekend. Some traders are required, or simply prefer, to exit positions ahead of Friday evening closes because adverse weekend newsflow can then threaten profit-and-loss accounts at the Asia open on Sunday evenings.

This is after the Pound was sent soaring higher against all of its rivals in the Thursday session when Conservative Party MP Rishi Sunak was announced as the UK's new Chancellor after Prime Minister Boris Johnson's cabinet reshuffle prompted the surprise resignation of Sajid Javid. Markets saw the appointment heralding greater agreement, if-not consensus between the PM's office and treasury when it comes to joint decisions over government spending plans.

"We had already been expecting fiscal policy to provide a decent boost to economic growth," says Paul Dales, chief UK economist at Capital Economics. "But the changing of the Chancellor this week means that boost could turn out to be even bigger. This increases the possible upsides to our forecasts for GDP growth, market interest rate expectations, gilt yields and the pound." 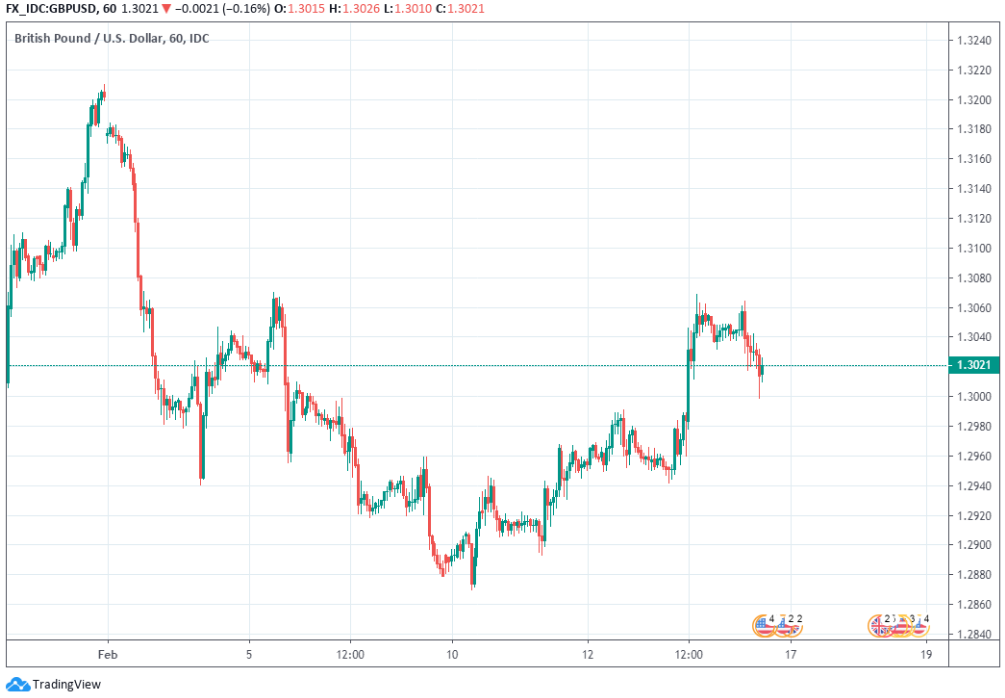 The UK economy ground to a halt in the final quarter of 2019, forcing the Bank of England (BoE) to contemplate a Sterling-negative interest rate cut ahead of last month's policy decision, due to both domestic and international headwinds.

And since markets first caught a whiff of that slowdown investors have been looking to the newly-elected government to loosen the purse strings in the hope of lifting growth back toward levels thought to be consistent with the BoE one day meeting its inflation target.

That means whispers from Westminster will be key to price action in the weeks and months ahead, with Pound Sterling's post-election uptrend against the Dollar at stake. However, and for those seeking an early indication of which way the current consolidative price activity will resolve, technical studies of the charts are suggesting a fresh march to the upside could be likely in the week ahead.

"This increasingly looks like a potential continuation pattern developing on the chart. Rallies will find initial resistance at the 55 day ma at 1.3063 ahead of the near term resistance line at 1.3120 and will need to regain this latter level on a closing basis to alleviate downside pressure and confirm the move higher to initially 1.3285," says Karen Jones, head of technical analysis for currencies, commodities and bonds at Commerzbank in a Friday research note. 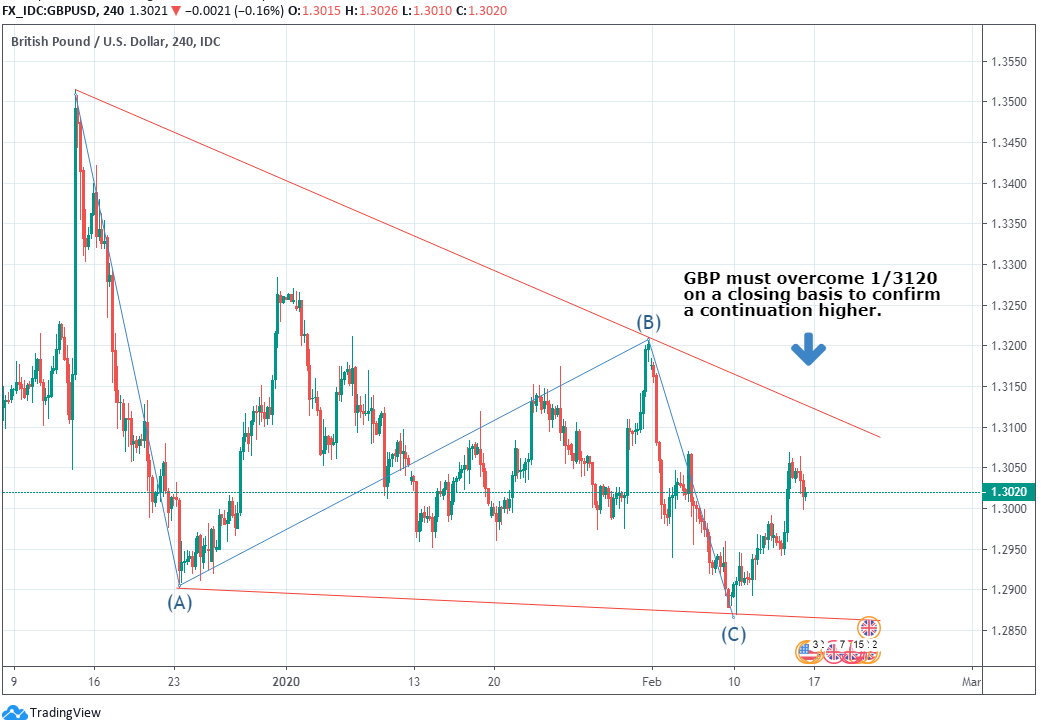 Above: Pound-to-Dollar rate at 4-hour intervals, with 'ABC' correction and possible continuation pattern marked out.

Jones has a "neutral to positive" outlook for the Pound-to-Dollar rate in the week ahead after Thursday's rally confirmed an ABC correction pattern. Leaving aside the technical parlance, this means Sterling should now attempt a break to the upside from the larger triangle shape on the above chart.

ABC price corrections normally resolve in direction of the dominant trend that was in place before the pattern began to form. In other words, and in this instance, the move down from December's highs was simply a correction and a fresh challenge of that multi-year high could still be in the pipeline.

"It is possible that this was the end of an ‘a-b-c’ correction, but it also looks like a potential top. We are biased towards the latter scenario, in which case we should see the 55 day ma at 1.3056 ideally hold the topside," Jones told clients Thursday, before Sterling's rally.

There's still uncertainty about the technical outlook in part because Sterling was repelled by the 1.3060 level at the tail end of its Thursday rally, which doesn't preclude the patterns on the above charts from morphing into a "topping" signal, although Jones is wagering on a fresh move higher.

Jones has a positive one-to-three month outlook for the Pound-to-Dollar rate and favours it overcoming the December high at 1.3515 and then targeting 1.3867. She recommended this week that Commerzbank clients buy the exchange rate at 1.2963 and 1.2945. 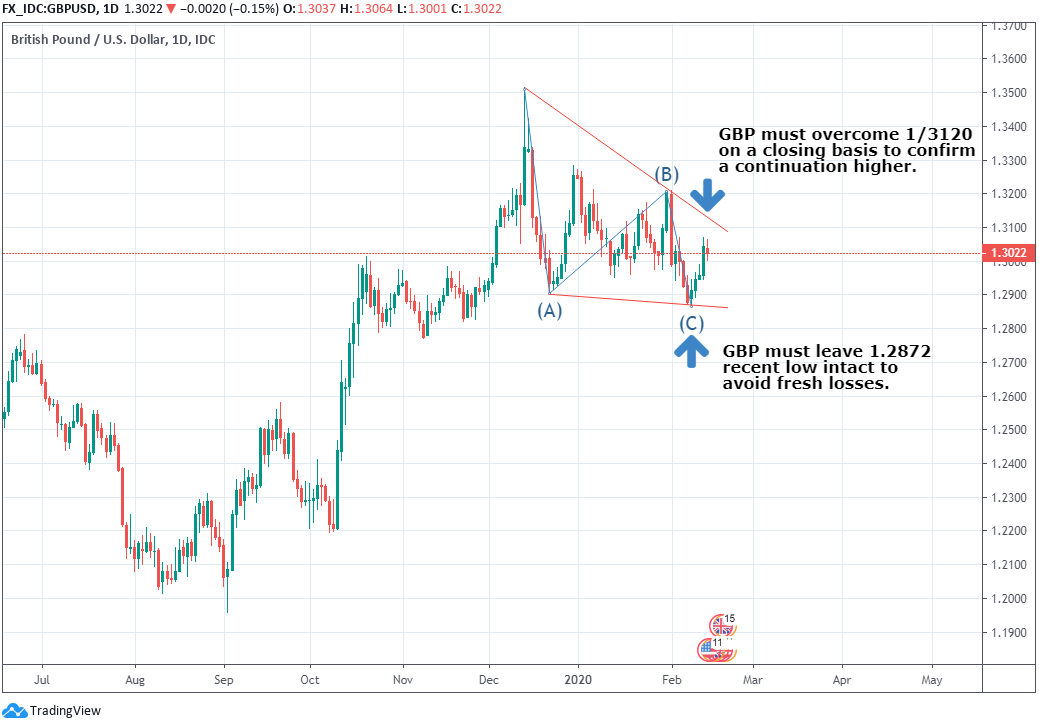 Above: Pound-to-Dollar rate at daily intervals, with 'ABC' correction and possible continuation pattern marked out.

Friday's price action came in a session where the greenback was itself weakening against many of its rivals after the Census Bureau downgraded its earlier estimates of retail sales growth for December. The Federal Reserve (Fed) said soon after that industrial production fell further in December than was previously thought, and at the same time it announced a -0.3% contraction for January. Markets were looking for only a 0.2% decline last month.

The Dollar has outperformed so-far in 2020 after again finding itself in a sweet spot where regular doses of bad global economic news leads it to benefit from safe-haven-flows, inbetween bouts of organic strength cultivated by what looks to be a still-best-in-class performance from the world's largest economy. The economic outperformance matters greatly for the Dollar because it risks making the already-large interest rate advantage of the greenback unassailable.

"We expect US data outperformance and elevated tail risks to provide the right environment for a stronger dollar," warns Daniel Been, head of FX strategy at ANZ. "COVID-19 continues to have a significant impact on economic activity and the livelihoods of people in China and the Western Pacific region. We expect uncertainty around the numbers of identified cases to continue, as identification methods have changed and as industrial activity gradually resumes. On balance, we think growth risks are tilted to the downside for Q1, potentially placing global economic stability in jeopardy." 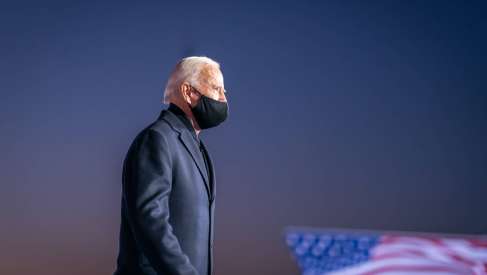