- December CPI soft but annual rates are still above 2%.

Consumer prices rose 0.2% in December, according to the Bureau of Labor Statistics, when markets were looking for a 0.3% increase. The miss was enough to wobble the Dollar even though the annualised rate of inflation still ticked higher from 2.1% to 2.3%, in line with expectations.

Core inflation rose 0.1%, below the 0.2% consensus although the annualised rate still held steady at 2.3%. Core prices are seen as a more reliable measure of domestically generated inflation trends because they exclude commodity and regulated price items from the goods basket.

"The Fed's stated goal of boosting underlying inflation didn't come to fruition in December," says Royce Mendes, an economist at CIBC Capital Markets. "Weakness was, however, relatively contained, and still left the annual pace of core CPI inflation running at 2.3%. But, with core PCE inflation tracking 1.6% as of November, the Fed likely didn't make any progress towards its inflation target to end 2019. The undershoot versus consensus should be positive for fixed income and negative for the dollar today."

The numbers suggest U.S. inflation pressures are not quite as strong as markets had come to believe but with both benchmarks still comfortably above the 2% target, they're not quite bad enough to have the Fed contemplating fresh cuts to its interest rate even if the central bank itself does prefer to take its cues from the personal consumption expenditures price index that was last seen running at only 1.6% for November. 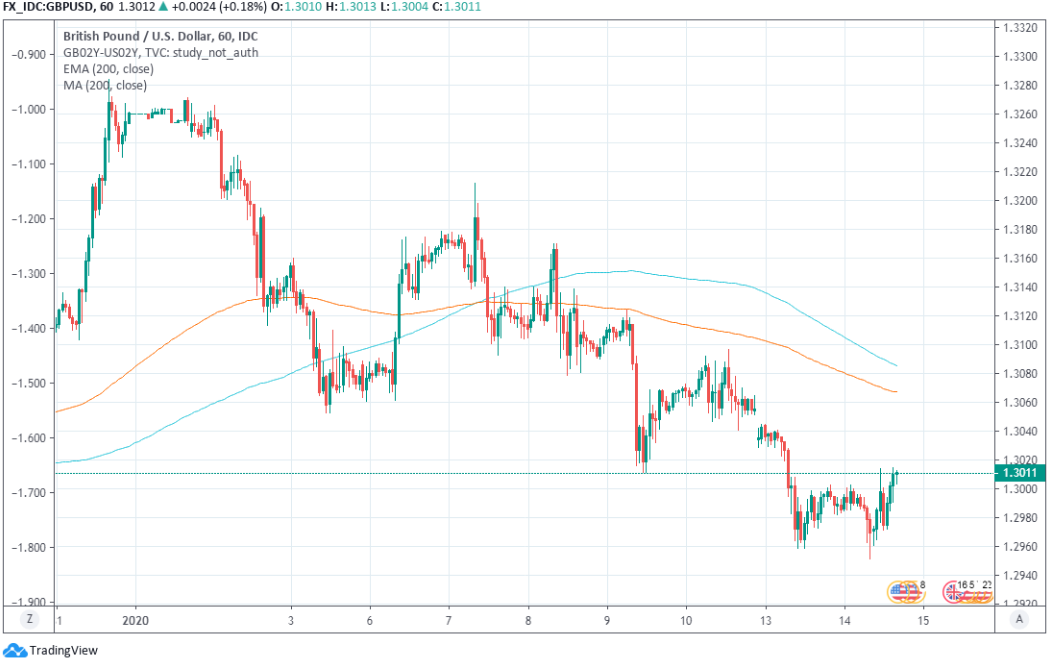 Markets care about inflation because it's the outlook for price growth that dictates interest rate policy, which influences the capital flows as well as speculative short-term trading activity that govern the Dollar. Higher inflation normally tends to beget higher rates and an often-stronger currency.

"Upside risks over the first half of this year center on medical care, rent, and perhaps modest tariff pass-through in some components where tariffed Chinese imports have large market shares. The overall story for now, though, remains that core inflation is under control. It’s not low enough to suggest that the Fed needs to ease, but it’s a long way from suggesting they need to tighten," says Ian Shepherdson, chief economist at Pantheon Macroeconomics.

Shepherdson says the Fed's preferred "do nothing for as long as possible" action is under no threat right now. However, a rate cut might not be necessary to boost the Dollar in the short term because markets currently expect at least cut later this year anyway, which is becoming difficult for Dollar bears to justify. Pricing in the overnight-index-swap market is implying that on December 16 the midpoint of the 25 basis point wide Fed Funds rate will sit at 1.31% when it's currently between 1.5% and 1.75%.

That pricing suggests also see at least some scope for a second 2020 rate cut, which represents a weight around the ankles of the Dollar, but any data or other developments that lead to an improvement in expectations for either U.S. or global growth might see the market's conviction on those Fed rate cut wagers begin to wane. That might be bullish for the Dollar and there's a handful of reasons to think that growth expectations may well improve. 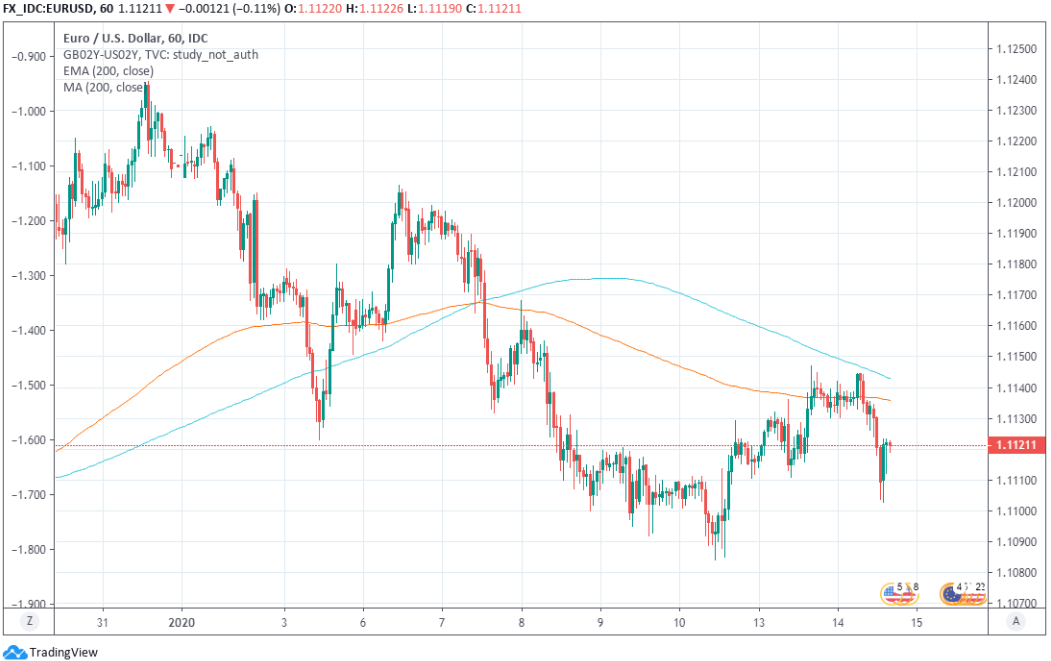 "We saw USDJPY and the CNH extend to new 6-month highs during Asia overnight after China pledged to buy nearly $80bln of manufactured goods from the US over the next two years, plus over $50bln more in energy supplies," says Eric Bregar, head of FX strategy at Exchange Bank of Canada. "We have a feeling tomorrow’s signing will be a “pomp and circumstance” type of event that will lack substance, but could potentially set traders up for a classic “buy the rumor…sell the fact” type of market reaction."

President Donald Trump and Chinese Vice Premier Liu He, who arrived in Washington overnight, will sign on Wednesday the much-vaunted 'phase one deal' struck between them back on October 11. The pact has already prevented new tariffs and is expected to see a small portion of the levies imposed on either side's exports removed, throwing both the U.S. and global economies a lifeline.

Wednesday's signing ceremony is supposed to mark at least a temporary cessation of the trade hostilities that have seen both sides impose tariffs on hundreds of billions worth of the other side's exports since early in the second quarter of 2018. But Wednesday's signing could be as good for the U.S. as it will for any other economy and with growth already near to its 'trend' or inflation producing rate, the ceremony may end up taking rate cuts off the agenda entirely for 2020. That would be bullish for the Dollar in the short-term.

"We think the markets could have a wake-up call and quickly focus on the more important and more difficult “next phase” of negotiations. Should this happen, we think the USD could rally broadly against commodity currencies including the Canadian dollar," Bregar writes in a note to clients. 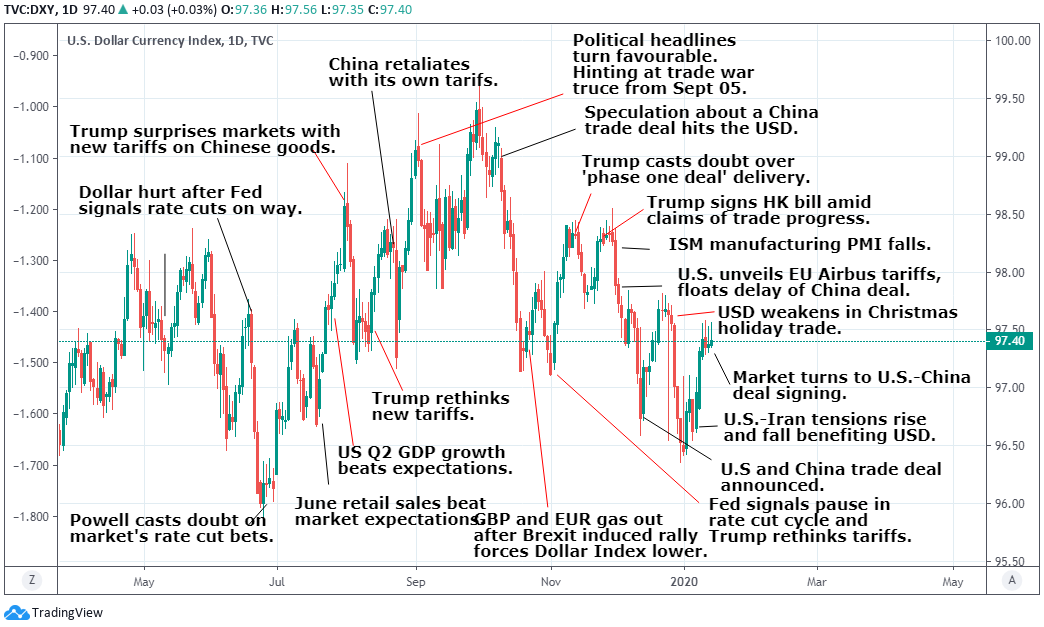