- But narrowing Conservative poll lead may now weigh on GBP.

- As USD draws support from unease over U.S.-China trade talks.

The Pound-to-Dollar exchange rate retains an upside bias on the charts and could still reclaim its May 2019 high in the weeks ahead, according to technical analysts at Commerzbank, although a narrowing Conservative Party lead in the opinion polls is a risk to the British currency.

Sterling was beaten into retreat last week by a cocktail of domestic and geopolitical uncertainties, but technical analysts at Commerzbank say it would take a fall below 1.2764 in order to negate the uptrend that's been developing since the middle of summer.

Jones, who studies trends and momentum on the charts rather than opinion polls and economic fundamentals, is looking for the Pound-Dollar to overcome the 1.30 level that's acted like a roadblock for it thus far in November. Overcoming that level will bring the 200-day moving-average, currently located around 1.3116, into view although Jones says there are some ciircumstances where the exchange rate could potentially rise as high as 1.3187. 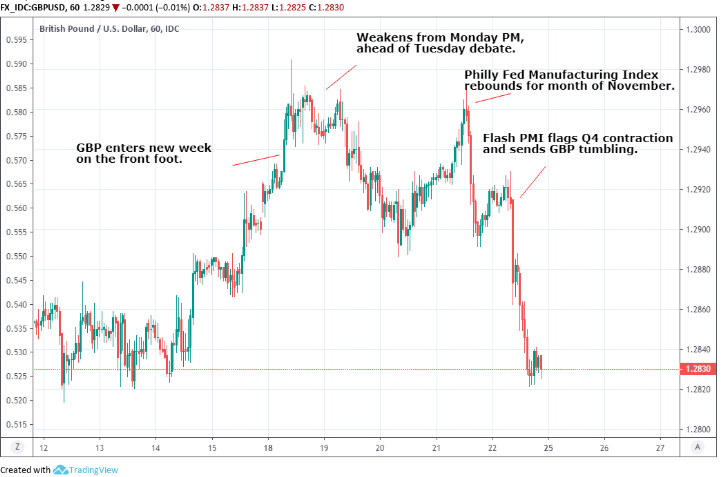 Jones is betting on an increase in the Pound-to-Dollar rate after having picked up the British currency when it was trading around 1.2841 and is targeting a move up to 1.3075 in the coming weeks. However, the Pound spent much of last week in retreat from the Dollar and although technical indicators on the charts are suggesting it will retain an upside bias in the coming days, the political and economic newsflow is arguing for continued losses.

"The sharp reversal of GBP yesterday and today highlights a lot of good news being priced at levels approaching 1.3000 and we see a greater risk of the Labour Party closing the opinion poll gap than the Tory Party extending the gap further. Combined with a possible escalation in global trade uncertainties due to US-China tensions reemerging and given weak UK fundamentals, GBP weakness could extend," says Lee Hardman, a currency analyst at MUFG.

MUFG, the world's fifth largest bank according to S&P Global Market Intelligence, has been betting against the Pound-Dollar rate through much of November despite having a bullish medium-term view on Sterling. The team in the London office says uncertainty over the and the prospect of an opposition Labour Party government could drag the Pound down from 1.2826 Friday, to 1.26 against the Dollar in the weeks ahead and they're not alone in having a bearish short-term outlook.

Prime Minister Boris Johnson saw his polling lead narrow last week even before the Conservative Party manifesto was published on Sunday, which might be taken by Sterling as a negative omen on Monday because it wasn't until after the various policy agendas were made known in 2017 that former-PM Theresa May's lead over the opposition began to melt away. 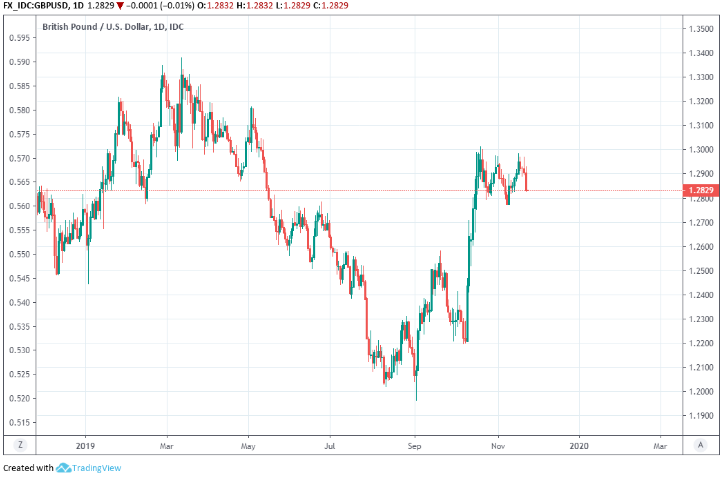 The Pound spent last week in retreat from the Dollar and although technical indicators on the charts are suggesting it will retain an upside bias in the coming days, the political and economic newsflow is arguing for continued losses.

Polls published in The Sunday Times and Sunday Express had the Tory lead retreating this weekend, with results collected after the televised leaders' debates but before manifestos of the main parties were published.

And a poll-of-polls featured in The Telegraph had the Conservatives on course for a 64 seat parliamentary majority, although others have suggested a lesser majority than that. That same poll reported by The Telegraph predicts a 55 seat loss for the opposition.

The Conservatives frequently command between 42% and 45% in the polls, while the opposition Labour Party has struggled to get above 30%. The Tories have enjoyed a strong lead over Labour since the election was announced but bitter memories of Theresa May's lead heading into the 2017 ballot, which proved to be erroneous, are containing enthusiasm for Sterling.

"It’s worth noting that it was only after the manifesto launched in 2017 that polling started to truly tighten up," says Jordan Rochester, a strategist at Nomura. "I would not recommend a fresh GBP long position here as it may only take a few polls showing a Labour party bounce or indeed another gaffe moment in UK politics from the Conservatives to put the market’s current base case in doubt and with it cause GBP’s recent grind higher to come undone."

A Conservative majority would likely mean the agreement struck by Boris Johnson in October becomes law, taking the UK out of the EU but locking it into 'transition period' during which the future relationship is negotiated. Crucially for markets, it would negate the threat of a 'no deal' Brexit, while electoral victory would spare the economy and Pound from years more of indecision and delay, if not worse, under an anti-Brexit opposition government.

This is why the Pound has been following the polling lead and implied prospects of the Tory majority closely ever since the election was announced.

"Next week’s calendar will lack market-moving data releases, which will leave GBP being solely driven by the expectations around the elections," says Chris Turner, head of FX strategy at ING. "For now, with expectations firmly around a Conservative win, sterling is likely to remain rangebound."

There are no major economic numbers due for release in the week ahead, although the U.S. calendar does feature a number of important releases that will impact the value of the greenback and therefore, the Pound-to-Dollar rate.

An IHS Markit PMI survey pointed last week toward another contraction for the economy in the final quarter, which weighed heavily on the Pound in the Friday session, right after the Philadelphia Federal Reserve manufacturing index rose sharply for the month of November.

That highlights the very real prospect of continued economic divergence between the UK and U.S. in the months ahead.

The Dollar rose against most major rivals Friday, marking a fourth day of gains for the Dollar Index, although its trajectory in the coming days will be determined by economic figures and developments in the U.S.-China talks.

Consumer confidence figures and the October Chicago PMI will provide insight this week into the recent condition of U.S. households and manufacturers, although the personal consumption expenditures (PCE) price index for October is arguably the highlight of the week on the economic front.

The consumer confidence report is out at 15:00 Tuesday, the PMI at 14:45 Wednesday and the PCE index at 15:00 Wednesday. In the middle of all this, core durable goods orders data for the month of October will be released at 13:30 Wednesday. That's important component of business invesment, which matters for final quarter GDP growth.

The PCE index is the preferred inflation measure of the Federal Reserve (Fed) and has been running below the 2% target throughout 2019. It declined from 1.4% to 1.3% in September so further weakness in October might incite speculation about more rate cuts up ahead.

"Overall, we see little chance of a turnaround in the recent direction of data in either the eurozone or the US, which should ultimately leave EUR/USD mostly driven by the USD safe-haven flows in relation to trade sentiment," says Chris Turner, head of FX strategy at ING.

Minutes of the October Fed meeting confirmed last week that sentiments expressed earlier in Washington by Chairman Jerome Powell are widely held on the bank's committee of rate setters, with many on the FOMC agreeing that rates are "well calibrated".

The Fed has signalled that its rate cutting cycle is now over for the time being, which has supported the Dollar through much of November and was a factor at play in price action last week. However, most significant for the Dollar in the week ahead will be the next developments in the U.S.-China trade talks.

Investors will be particularly keen to see if President Donald Trump will put his signature to the Hong Kong Human Rights and Democracy Act that passed through Congress last week, because it has scope to further complicate the path toward the 'phase one deal' U.S. and China are attempting to formalise.

The bill, which is expected to become law regardless of whether Trump signs it, threatens to remove Hong Kong's special trade status as well as to impose sanctions on some Chinese officials if the city's independence is undermined. Passing it already drew a rebuke from China accompanied by threats of an unspecified retaliation if makes it onto the statute book, so it's possible that signing it could have adverse consequences for the trade talks.