- Pound to be moved by Brexit news and PMIs

- U.S. Dollar by ISMs and Payrolls

The GBP/USD exchange rate is trading at 1.2284 at the start of the new week after falling 1.50% in the week before. Studies of the charts suggest further weakness is possible subject to a break below a strong support zone which lies just below the current market level.

The 4 hour chart - used to determine the short-term outlook, which includes the coming week or next 5 days - shows the pair pulling back after peaking at the September 20 highs. 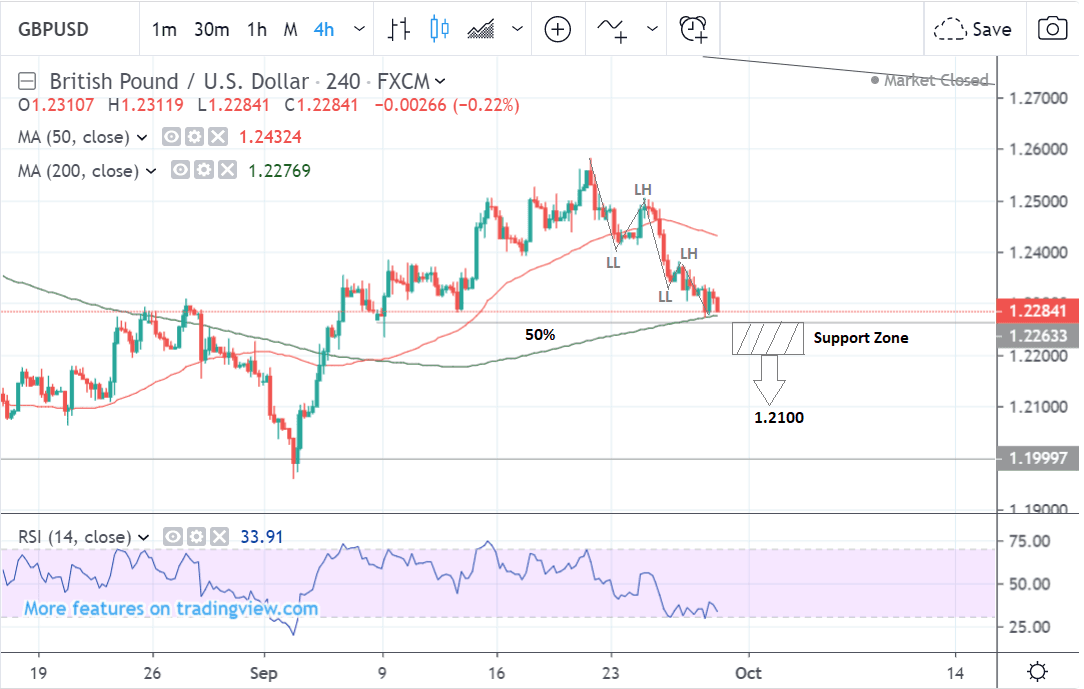 The exchange rate's familiar peaks and troughs are starting to fall in a step-decline lower now. When the market forms two sets of lower lows and lower highs it is one of the first signs the trend is turning bearish.

Yet, at the same time, the pair has hit a tough support zone which will make further downside more difficult to achieve.

It will require a clear break below the bottom of the support zone at 1.2200 to give the green-light to an extension lower, down to the next downside target at 1.2100.

The daily chart shows more clearly the constituents of the support zone below price, which is composed of the 50-day moving average (MA) at 1.2262 and the 50% level, or midpoint, of the September rally. 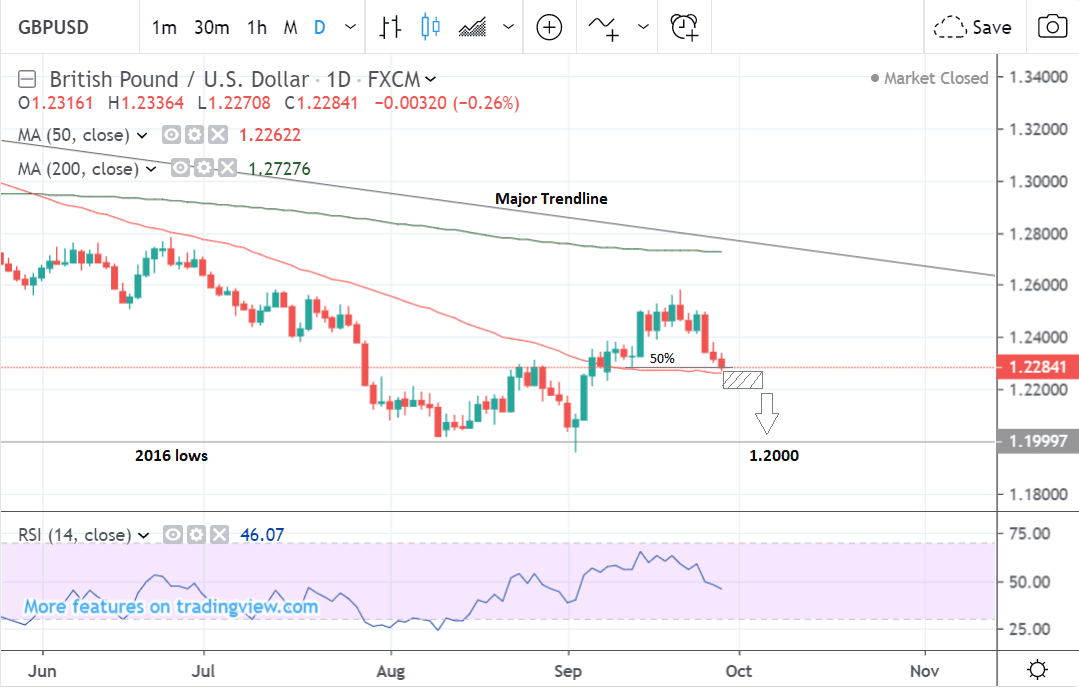 The midpoint of the prior rally has a special significance which increases its support and resistance qualities, and this combined with the MA, is likely to be difficult for bears to push beneath.

If they can push the exchange rate below 1.22, however, it will provide confirmation of more downside to a target at 1.2000 and the 2016 lows.

The weekly chart shows how the pair has been falling long-term in a downtrend and given the old adage ‘the trend is your friend’ this downtrend is more likely to extend. 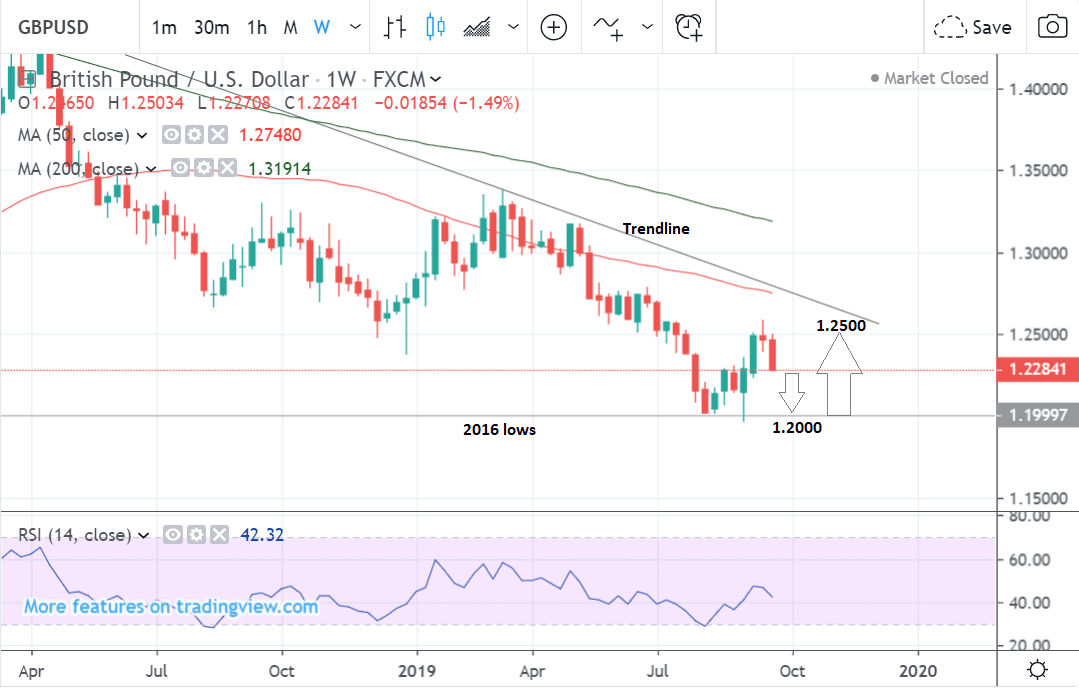 The 2016 lows are a major historic level which has been touched many times and a rebound from there is likely.

The main drivers for Sterling in the week ahead are the unfolding Brexit drama and PMI data.

The main risk to the Pound is that the government strengthens its position on taking the UK out of the EU on October 31 regardless of whether a deal is in place or not.

In reality, this would involve them finding a loop-hole around the so-called Benn Act - the law forcing it to seek an extension to the Brexit deadline if it does not have a deal by October 19.

Given increasing fears of civil disobedience and death threats to politicians related to Brexit, the Observer on Sunday reports one law the government could invoke to get around the Benn Act is the Civil Contingencies Act 2004, which grants it special powers in the event of a national emergency to override parliament.

Another loophole would be that highlighted this week by John Major whereby the Government uses an ‘Order of Council’ to suspend the law, something which would not require the approval of either lawmakers of the Queen. Such a move, however, would be heavily criticised and almost surely challenged in the courts.

If either of these courses were taken in the week ahead they would have extremely negative knock-on effects for the Pound. However, we regard chatter of these methods as being speculative.

We feel the more pertinent story will be in Parliament, which also has options which would impact on the Brexit saga in the coming week.

The first would be to bring a vote of no-confidence in the government, however, lawmakers are split on who should lead any possible care-taker government, with the Labour party and the SNP supporting a Corbyn-led government, but the Liberal Democrats and rebel Conservative MPs against the idea.

Another possibility is that a figure which is agreeable to everyone is appointed as caretaker PM instead.

A vote of no-confidence would bring a lot of uncertainty with unclear effects on the Pound, although initially, it might weaken it. It could raise the risk the UK could drop out of the EU anyway simply due to the clock ticking down in the midst of the political vacuum which would temporarily ensue during the wait for a general election.

One positive potential outcome for the Pound would be if the government managed to finally agree a deal with the EU and this is more possible given increased willingness on both sides to return to the table.

There is a possibility that the government’s recent proposals to solving the problem of the Irish backstop may be published in the coming week and these may also impact the Pound. If the proposals look workable Sterling could rise strongly.

On the data front, the main releases for the Pound are PMI data - survey-based leading indicators for the economy.

Manufacturing PMI for September is expected to show a decline to 47.0 from 47.4 when it is released on Tuesday, at 9.30 BST.

A lower-than-expected result would put pressure on the Pound and vice versa for a higher result.

This is especially true following recent comments from Micheal Sauders, an official at the Bank of England (BOE), who said the BOE may need to lower interest rates to help offset a slowdown in the economy.

Lower interest rates normally depreciate the local currency because they attract less money from foreign investors looking for somewhere to park their capital.

The main releases for the U.S. Dollar in the coming week are the ISM Manufacturing survey on Tuesday, the ISM Non-Manufacturing PMI on Wednesday, and Non-Farm Payrolls out on Friday.

The ISM Manufacturing PMI is an important gauge of the U.S. economy which often impacts on the Dollar.

The result may be especially pertinent this time around given the current debate about whether the U.S. economy is in danger of entering a recession or not.

It is a survey-based indicator generated using responses from purchasing managers within sector-specific companies, who are viewed as pivotal in assessing the outlook. Along with the ISM non-manufacturing is viewed as a reliable leading indicator for the broader economy.

ISM Manufacturing in September is forecast to show a rise to 50.1 from 49.1 previously when data is released at 15.00 on Tuesday.

A result above 50 would be significant as it is the differentiator between growth and contraction.

The ISM fell below 50 for the first time in over 2 years in August, and a rise back above would be a major positive sign for the economy, and for the U.S. currency.

It is significant for the same reasons as the ISM Manufacturing PMI.

The final key release for the U.S. Dollar is Non-Farm Payrolls for September, which is forecast to show a 145k rise in the number of new jobs created by the U.S. economy when released at 13.30 on Friday.