- Pound to be moved by Brexit developments; U.S. Dollar by inflation and retail sales

The GBP/USD exchange rate is trading at 1.2288 at the start of the new week after rising 1.05% in the week before, and our latest technical studies of the charts suggest that the pair has a more bullish outlook after recent gains.

The 4 hour chart - used to determine the short-term outlook, which includes the coming week or next 5 days - shows how the pair bottomed at the 1.1958 September 3 lows and from there started a new uptrend. 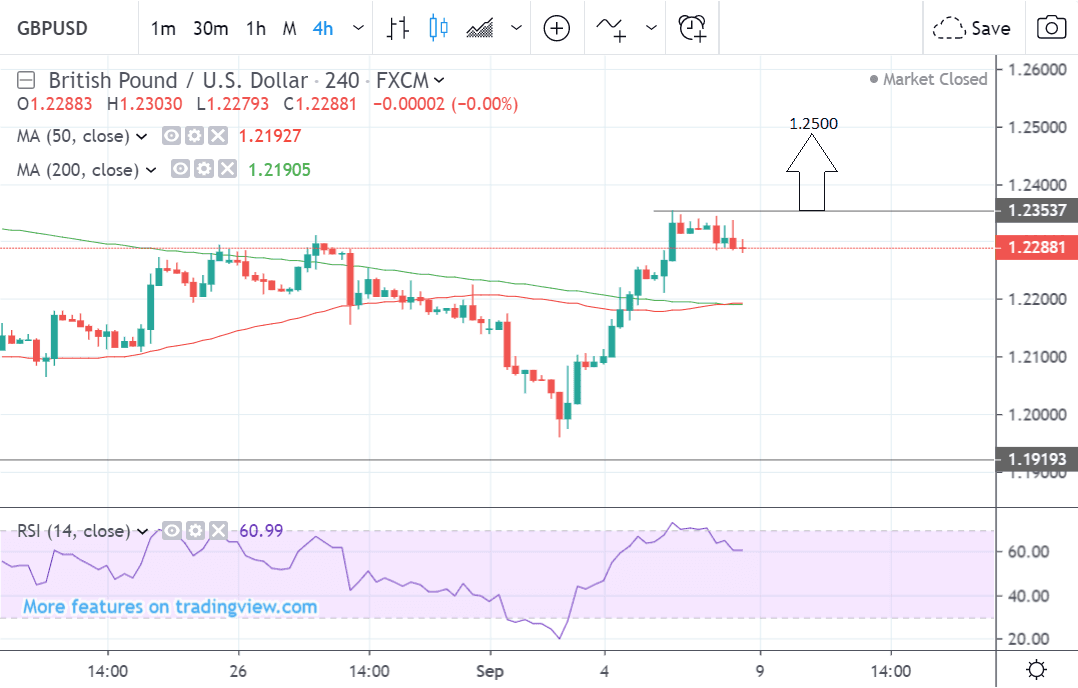 Although the exchange rate has pulled back since peaking at 1.2353 highs the pull-back has been gentle so far and this suggests a good chance the uptrend will eventually resume.

A break above the 1.2353 highs would probably lead to a move up to a target at 1.2500, a key milestone figure for the pair, where traders are more likely to take profit on their positions.

The daily chart shows how the pair bottomed last week, formed a hammer reversal candlestick and then made a strong recovery over the last 4 days. 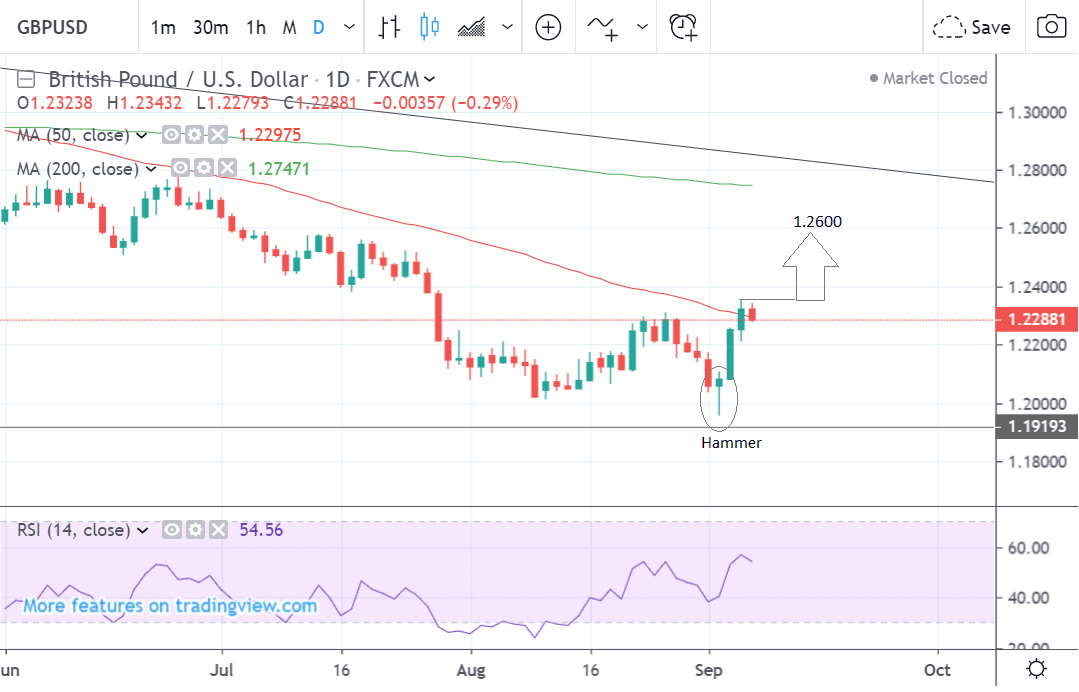 It has risen up and encountered resistance from the 50-day moving average (MA) from where it has started pulling back.

This pull-back looks temporary and we expect a resumption higher eventually. Last week’s new uptrend was so sharp we expect it to continue. A break above the September 5 highs would probably confirm more upside to a target at 1.2600.

The weekly chart shows the pair appearing to bottom and reverse the long-term downtrend and start moving higher at the October 2016 lows. 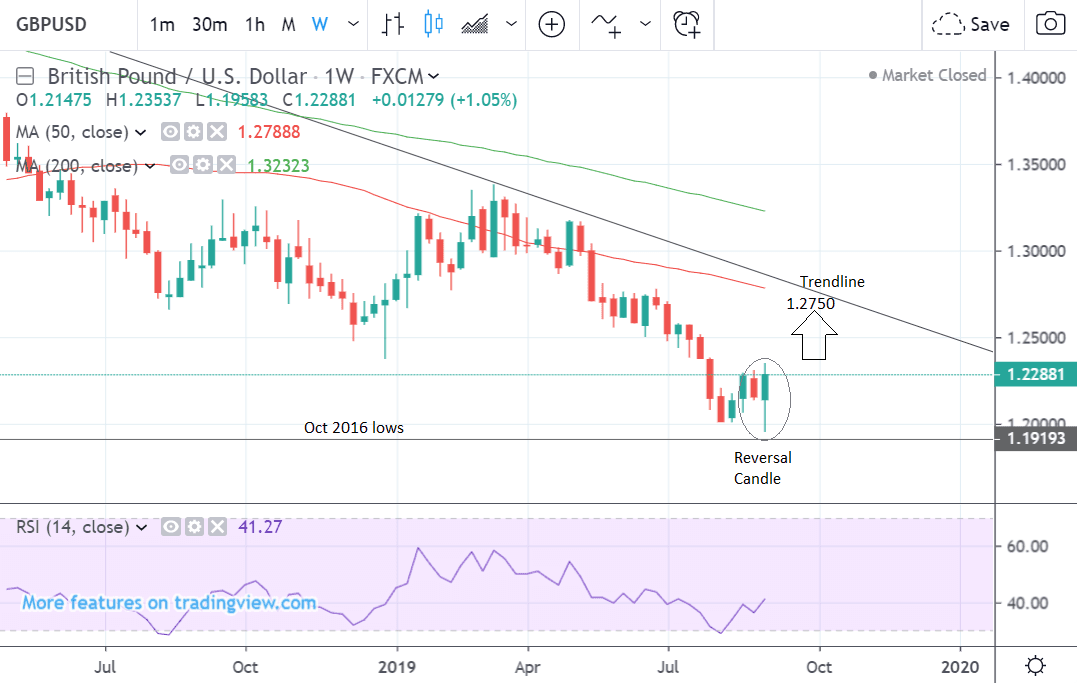 The pair formed a reversal looking candlestick last week which looks a little like a hammer but is not exactly - nevertheless it looks quite bullish.

The RSI momentum indicator is looking constructive after rising relatively strongly out of the oversold zone.

The pair is showing the potential to continue its recovery up to a possible target at a major trendline and a target at around the 1.2750 level.

The two main data releases for the U.S. Dollar in the coming week are inflation data on Thursday and retail sales on Friday.

Core inflation is expected to show a 0.2% rise month-on-month and a 2.3% yearly rise.

Inflation has been rising quite strongly over recent months but should ease marginally in August according to some analysts.

“Core CPI inflation has ripped higher over the past two months, registering back-to-back gains of 0.3%. The prior two months’ strength was helped by catch-up in apparel and used autos prices, with July getting an extra boost from the volatile hotel and airfare components. We expect to see those effects fade in August, but for core prices to still eke out a 0.2% gain. Including food and energy, we expect the CPI to rise only 0.1% due to lower gas prices last month,” says U.S. lender Wells Fargo in a preview note to clients.

Despite recent strong gains in inflation, analysts at Wells Fargo do not expect the Federal Reserve (Fed) to drop their bias towards easing and cutting interest rates.

“Another surprisingly strong reading on core inflation is unlikely to sway the FOMC’s easing bias. We believe the Fed has grown more tolerant of 2%+ inflation as it desires to raise levels of inflation expectations,” says the bank.

Higher inflation could be a result, in part, to rising tariffs on inports - an influence the Fed is likely to ‘look through’.

The U.S. consumer has remained relatively resilient despite the recent slowdown in manufacturing and the release will provide insight as to whether that is still the case.

“On Friday, retail sales and the University of Michigan’s preliminary reading of the consumer sentiment index will be closely watched too for proof that US consumers are still spending generously. In July, retail sales jumped by a stronger-than-expected 0.7% month-on-month. They’re forecast to have moderated somewhat to 0.3% in August,” says Raffi Bopyadijian, an investment analyst at FX broker XM.com.

The report could be key in relation to the Fed’s assessment of monetary conditions.

“The August retail sales report will be poured over to gauge how consumer spending is faring in the wake of recent tariff threats and volatility in financial markets. Another solid report will be taken by the Fed as a signal that consumer spending is holding up in the face of global headwinds, and that the economy is not in much need of additional policy accommodation at this time. A big miss, however, would raise concerns that consumer spending cannot sufficiently offset the headwinds from slower global growth and trade uncertainty, and add urgency for the Fed to ease policy further,” says Wells Fargo.