- More cuts from the Fed will aid the ailing U.S. and global economies.

Non-farm payrolls grew by 130k in August, the Bureau of Labor Statistics said Friday, which was down from 159k in July and far beneath the consensus for an increase to 163k. The jobs numbers was a disappointment for markets, although there was compensation for that in the form of wage and employment figures.

The unemployment rate held steady at a multi-decade low of 3.7% in August while American wage packets rose by 0.4% when markets had looked for an increase of only 0.3%. The annualised rate of wage growth was a healthy 3.2% last month which, although down a touch from 3.3%.

"The payroll details are worse than the headline, which was boosted by a 28K increase in federal government hiring, most of which was for the Census and will reverse in due course," says Ian Shepherdson, chief economist at Pantheon Macroeconomics. "This is not a disaster in itself - the numbers are noisy - but with surveys pointing unambiguously to much slower payroll growth over the next few months, the chance of a sustained rebound is slim. 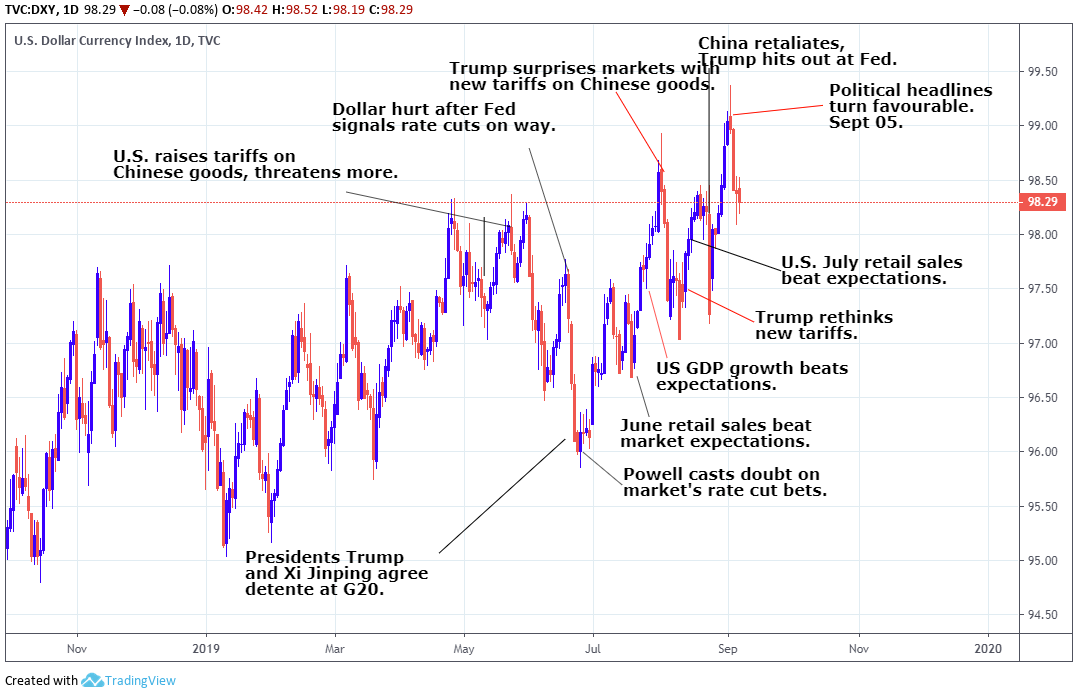 The Dollar index extended losses following the report, with the greenback down against all of the top ten major currencies other than the Pound and safe-haven Swiss Franc. U.S. bond yields initially reversed earlier losses to trade more than 1% higher on an intraday basis, which is a classic sign that markets see something as being negative for the interest rate outlook. Stock markets continued to march higher across the globe.

Friday's cocktail of lower jobs growth and higher monthly wages might be viewed by economists as an unsustainable one because if the economy stops creating new employment, wage pressures could dissipate and market expectations of inflation in the years ahead might fall.

U.S. inflation rose to 1.8% in June but remained below the 2% target of the Federal Reserve, while the bank's preferred measure of price pressures is even lower. The personal consumption expenditures price index was just 1.4% in June and some including President Donald Trump have already used this to argue for steep rate cuts from the Fed over the coming months. 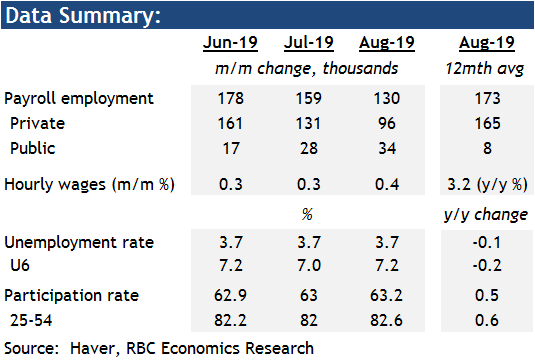 "The 130k increase in August employment in the US was a bit softer than expected, and won’t do much to calm concerns that economic growth is slowing in the second half of 2019 under the weight of escalating international trade tensions," says Nathan Janze, an economist at RBC Capital Markets. "Fed policymakers will still likely take some slowing in payroll employment growth this year as validation for further rate cuts – but that also helps to decrease the odds that industrial weakness will spill over into a broader slowdown in the economy."

The Fed cut its interest rate 25 basis points to 2.25% in July but signalled a reluctance to follow up with anything more than one solitary additional reduction, whereas President Trump has argued for 100 basis points worth of cuts. However, Chairman Jerome Powell signalled from Jackson Hole last month that he could now be open to a broader change of direction in U.S. monetary policy. 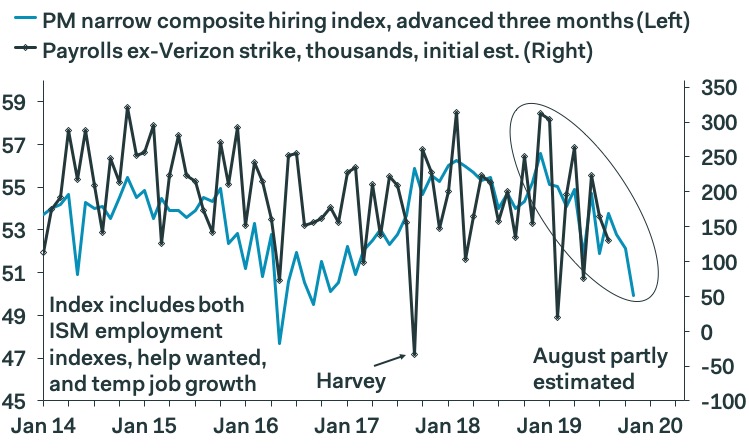 "The manufacturing recession is not enough to dampen wage pressures across the rest of the economy; the sector employs less than 9% of the workforce. In other sectors, we think employees are finally shaking off the shock of the crash and are now seeking to exploit their scarcity in pursuit of faster wage gains. If this continues, it will make life harder for the Fed, especially if—as we expect—the tariffs are pushing up goods price inflation," Pantheon's Shepherdson says.

U.S. growth has slowed modestly in 2019 as the tax cuts of 2018 wear off and after Trump's trade war with China began to hurt sentiment and output in the manufacturing sector, although the global economy has had a tougher time and fears among policymakers are that the external slowdown will soon come back to bite the U.S. economy. Europe and China have led the global slowdown, both whome are big trade partners of the U.S.

U.S. and Chinese negotiators will enter talks aimed at de-escalating the tariff fight this month and next, which raised hopes Friday of another possible detente in the conflict and helped lift so-called risk assets the world over while puting the safe-haven Dollar in a hole. However, any truce produced by the discussions would be just the latest in a long line of now-abandoned detetntes and the talks are coming only after another round of tariffs were imposed by each side upon goods imported from the other.

"Today's report may raise some eyebrows at the Fed as several officials remained laser-focused on possible spillovers from a downbeat manufacturing sector," says Oscar Munoz, a macro strategist at TD Securities. "A weaker private payrolls number should keep the USD on the backfoot in the short-term. There is a limit to this however as the market's focus will shift to the ECB next week where large-scale easing is expected...we would look for EURUSD to find considerable resistance into 1.1090/1.1125." 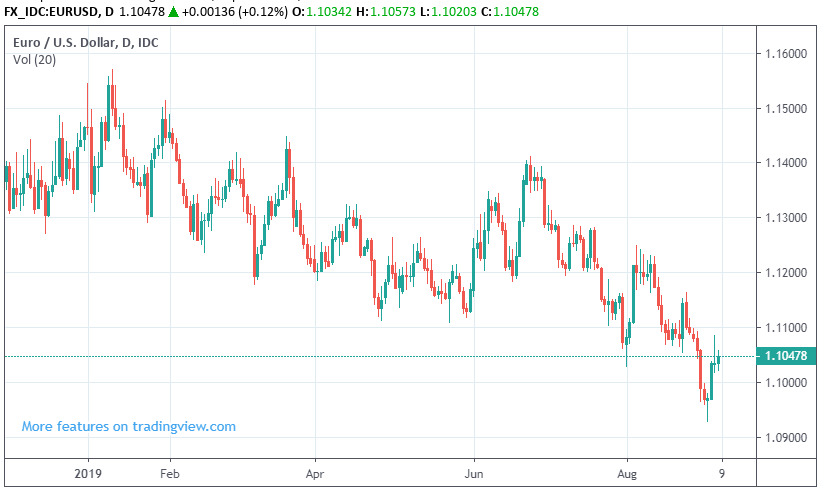