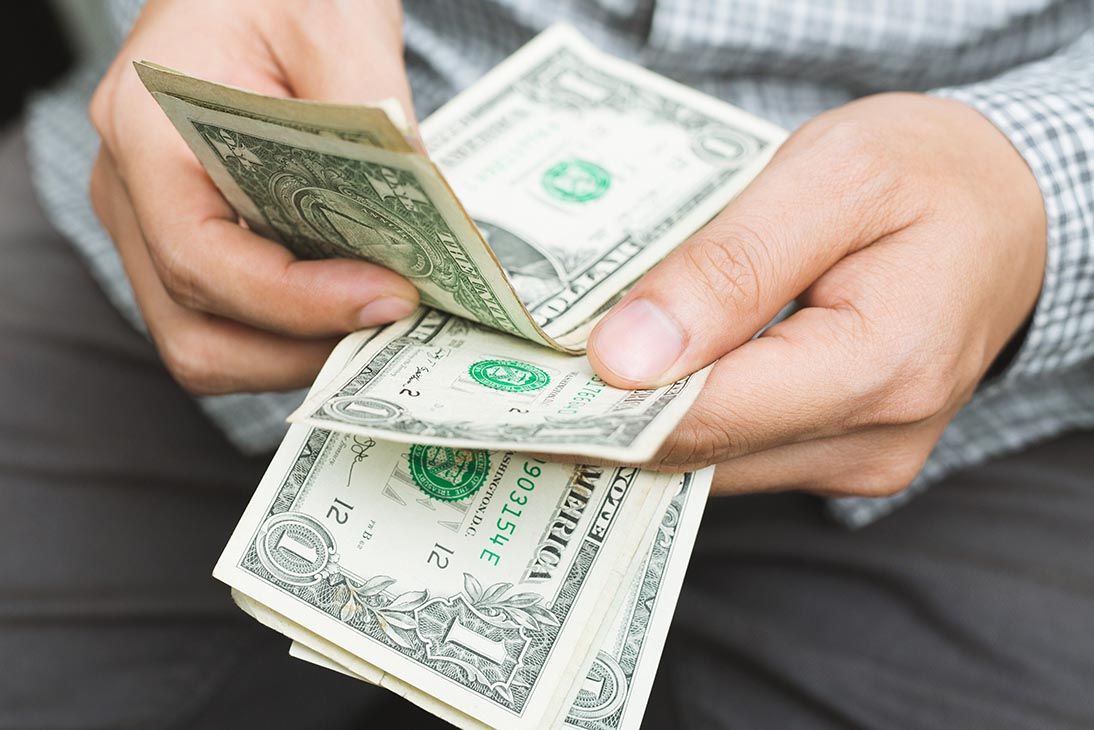 - Pound to be moved by Brexit speculation; U.S. Dollar by trade tensions

The GBP/USD rate is trading at 1.2244 at the start of the new week after rising almost 1.16% in the week before and studies of the charts suggest that the short-term trend has turned positive.

The 4-hour chart - used to determine the short-term outlook, which includes the coming week or next 5 days - shows the pair continuing to recover from the August 11 lows. 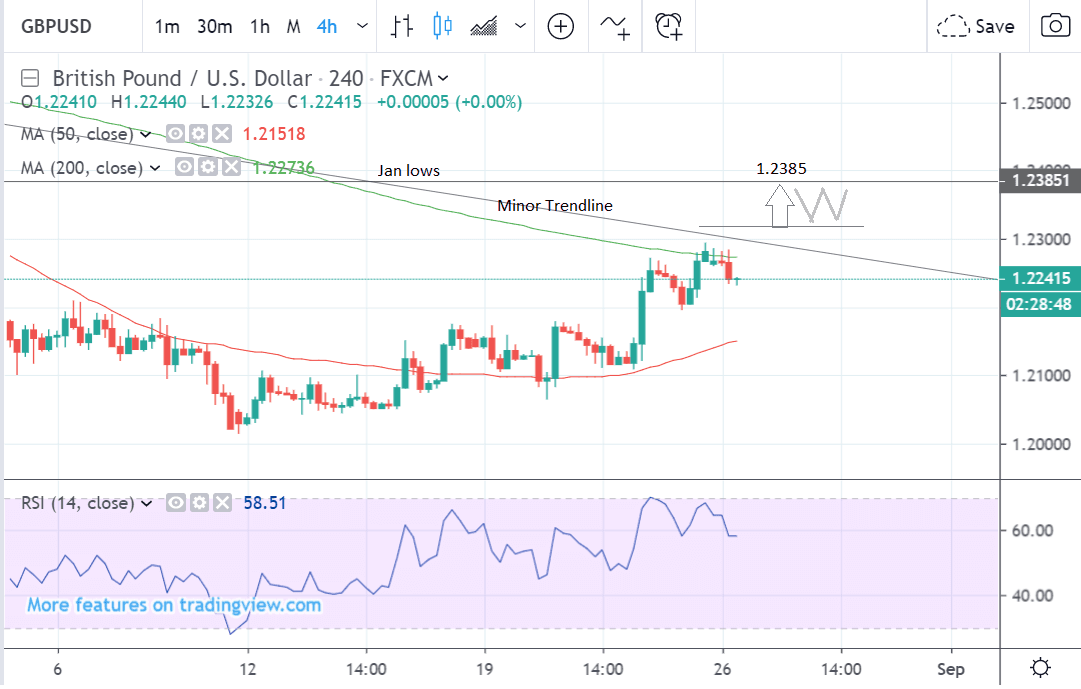 The rebound has established a new sequence of rising peaks and troughs which strongly indicates the onset of a new uptrend.

GBP/USD has risen to just below a minor trendline which could impede further upside and ideally we would like to see a clear break above the trendline for confirmation of more upside. A break above the 1.2315 level would probably lead to a continuation up to a target at 1.2385 and the January highs.

After that, there is a risk the pair might pull-back and trade sideways for a time before continuing the trend higher.

The daily chart shows how the pair has rebounded quite strongly from the August lows. 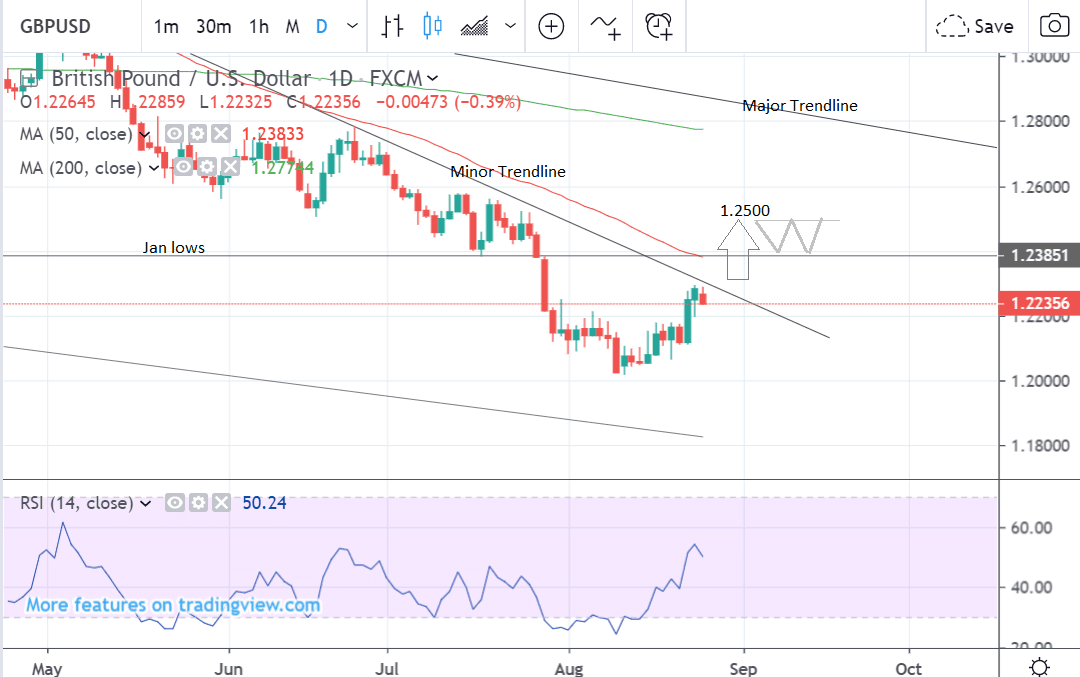 The rally has been accompanied by strong upside momentum with the RSI now at the same level it was in July when the exchange rate was in the 1.25s.

If the pair continues rising over the medium-term it could reach an upside target of circa 1.2500.

At that level risks increase that it might pull back down to the January lows and consolidate in a sideways trend for a while.

The weekly chart - used to give an idea of the longer-term outlook, which includes the next few months - shows the pair potentially reversing trend. 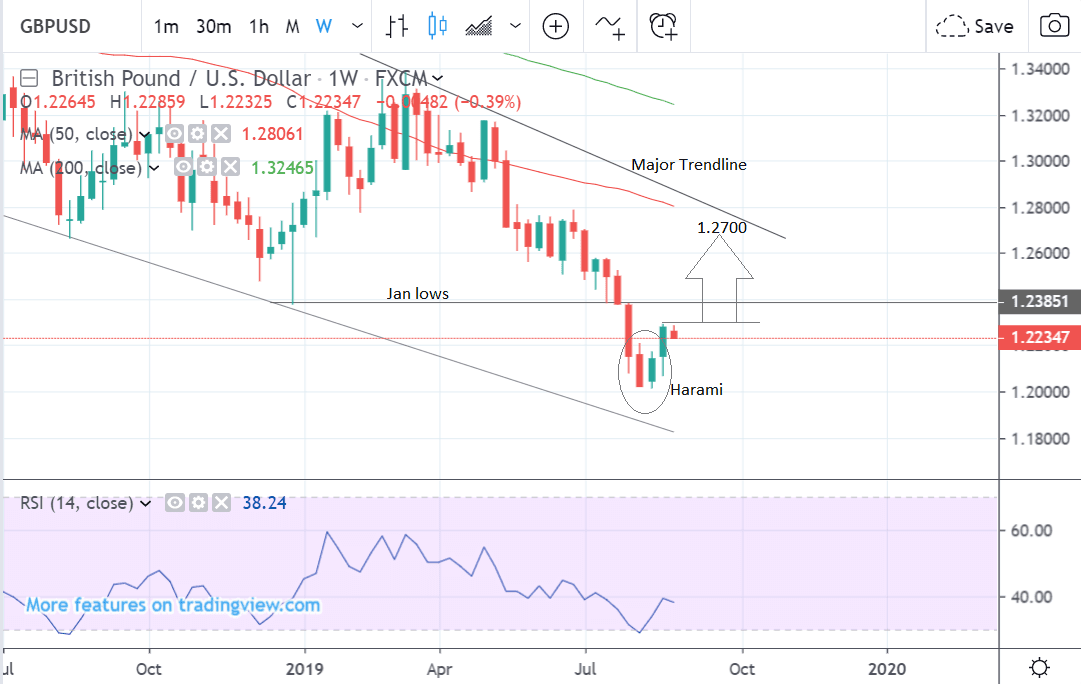 The pair formed a harami reversal candlestick pattern a few weeks ago (circled), followed by a bullish candle last week, and these signs reinforce the original signal and suggest more upside on the horizon.

Another bullish sign is that the RSI momentum indicator recently exited the oversold region and gave a ‘buy’ signal.

The pair could rally all the way up to a target at 1.2700 to the upside close to the level of the major trendline, which is at that point, likely to present resistance to more upside.

Trade tensions between the U.S. and China will probably take centre stage over coming days after the escalation seen last week, when the Chinese announced a new set of tariffs on U.S. goods.

The tariffs included an increase of between 5% and 10% to be implemented at the start of September and 25% tariffs on U.S. car imports.

In retaliation, Donald Trump threatened to slap even higher tariffs on Chinese imports, increasing existing tariffs from 25% to 30%, and threatening to increase expected tariffs of 10%, earmarked for another $300bn of Chinese imports, to 15%.

Trade issues will probably eclipse data in the week ahead as they are seen as a more significant factor for the U.S. economy, according to Marios Hadjikyriacos, an investment analyst at XM.com.

“Even if these figures are stellar, the central bank is still certain to slash rates next month, as it tries to safeguard the US economy from the negative effects of trade tensions. Indeed, the Fed has made it clear it’s not cutting rates because the economy is in trouble, but rather so it doesn’t get into trouble in the first place,” says Hadjikyriacosm, adding:

“Therefore, the most crucial factor for how aggressively the Fed will act may be whether the White House proceeds with slapping new tariffs on China on September 1. Judging by Trump’s raise-the-stakes negotiating style, further escalation is very likely,” such an outcome would force the Dollar lower, says the analyst.

The Federal Reserve (Fed) is still likely to cut interest rates in September, in an effort to insulate the economy from a potential trade-induced downturn, and lower interest rates will probably weigh on the U.S. Dollar, since they act as less of a draw on foreign capital inflows.

On the 'hard' data front, the key releases are likely to personal consumption expenditure (PCE) and personal spending also on Friday.

PCE is the Fed’s preferred gauge of inflation and it is forecast to show a 0.2% rise in July compared to the month before and a 1.6% rise compared to a year ago.

PCE impacts on interest rate expectations which could be important given the debate around how much the Fed is expected to cut interest rates in September.

A lower-than-expected PCE result, therefore, would fuel bigger rate cut expectations, driving the U.S. Dollar down in the process.

Personal spending, as well as consumer confidence, are both likely to come out relatively strongly when released next week, as all the signs are that the U.S. consumer continues to spend relatively liberally.

The main driver for the Pound in the week ahead is likely to further speculation over Brexit and we will be looking for an improved atmosphere between the UK and EU to aid further gains.

Over the weekend Prime Minister Boris Johnson said at the G7 Summit in France that a ‘no-deal’ Brexit remained a “touch and go” prospect, but he expressed satisfaction that European leaders appear increasingly willing to talk. 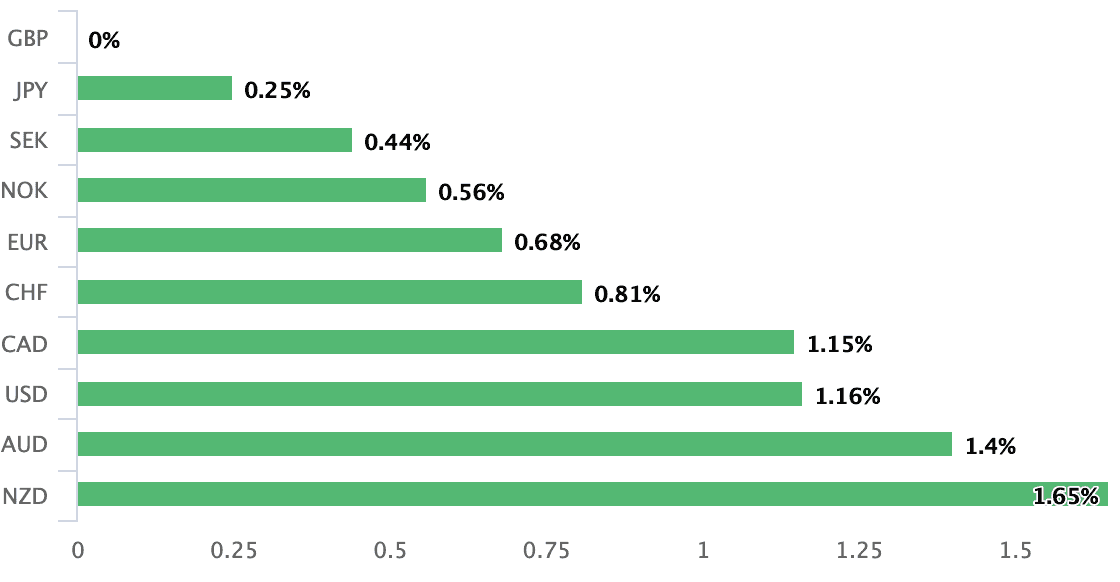 Above: Sterling was the best-performing major currency last week

Sterling rallied last week as EU leaders sounded a decidedly more constructive tone on looking for a way around the impasse posed by the Northern Irish border question: Johnson wants the Irish border 'backstop' completely removed from the existing Brexit deal, while EU leaders have previously said the issue was not up for negotiation.

Germany's Chancellor Angela Merkel and France's President Emmanuel Macron last week suggested there was 30 days for the UK to come back with realistic alternatives to the backstop that would ensure the border stays open.

“We can find a solution to the backstop by October 31…we can work on finding a regime that keeps the Good Friday Agreement and also ensures the integrity of the single market,” said Merkel at an event in the Hague.

The risks of a ‘no deal’ have increased since Prime Minister Boris Johnson came into power and there will remain uncertainty as to whether the UK can present proposals acceptable to the EU, which should keep any advances in Sterling limited.

There is an added risk Boris Johnson may call a general election in the coming weeks in order to increase his majority so he has more power to enforce a Brexit on his terms.

His recent spending pledges were seen as paving the way for such an event.

Calling an election would likely keep the pressure on Sterling as the currency tends to underperform heading into General Elections owing to heightened uncertainty.