- But end-July to bring renewed Brexit push and GBP losses.

The Pound is recovering lost ground from the Dollar and could go on rising in the coming weeks according to technical analysts at Commerzbank, although fresh Brexit scenario analysis from TD Securities suggests big losses could be lurking ahead in the Autumn months.

Sterling bounced higher Wednesday after official data revealed a solid rebound in UK GDP growth for the month of May and as the Dollar retreated from recent highs following hints from Chairman Jerome Powell suggesting the Federal Reserve (Fed) is likely to cut its interest rate at the end of the month.

Wednesday's events have rescued the Pound-to-Dollar rate from levels that were close to two-year lows if the January 'flash-crash' from 1.273 down to 1.2376 and back up again is removed from the charts. Now, Germany's Commerzbank is eyeing scope for a continued climb.

"GBP/USD has sold off to and reversed from the January low at 1.2444, given the divergence of the daily RSI we would allow for a deeper retracement. Minor resistance comes in at the 1.2559 May low and the resistance line at 1.2650. Key resistance remains the 1.2772/84 mid February low and June high," says Karen Jones, head of technical analysis at Commerzbank. "A rise above the June high at 1.2784 would indicate that a bottom is being formed." 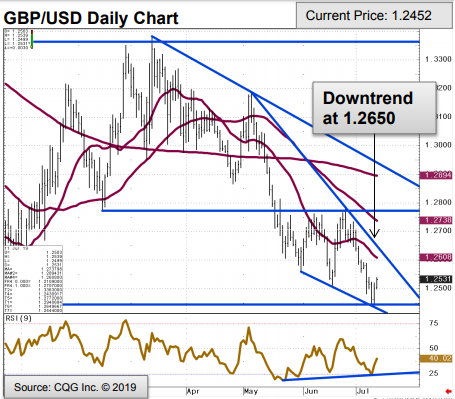 Jones bought the Pound-to-Dollar rate on Wednesday around the 1.2452 level after Sterling fell sharply during the previous overnight session, taking it beneath the 1.25 handle. She says she'll reduce her bet when the market reaches 1.2650 and exit it entirely at 1.2735.

The intention to abandon the bet on Sterling when the exchange rate reaches the 1.2735 level implies an expectation the Pound-to-Dollar rate will not be able to overcome 'key resistance' at 1.2772 before selling pressures begin to weigh on the British currency again.

Jones suggests that if Sterling retreats from that resistance level it could ultimately head back down to Wednesday's low around 1.2440. She also says that if that level gives way then the Pound could ultimately decline all the way down to 1.2108. 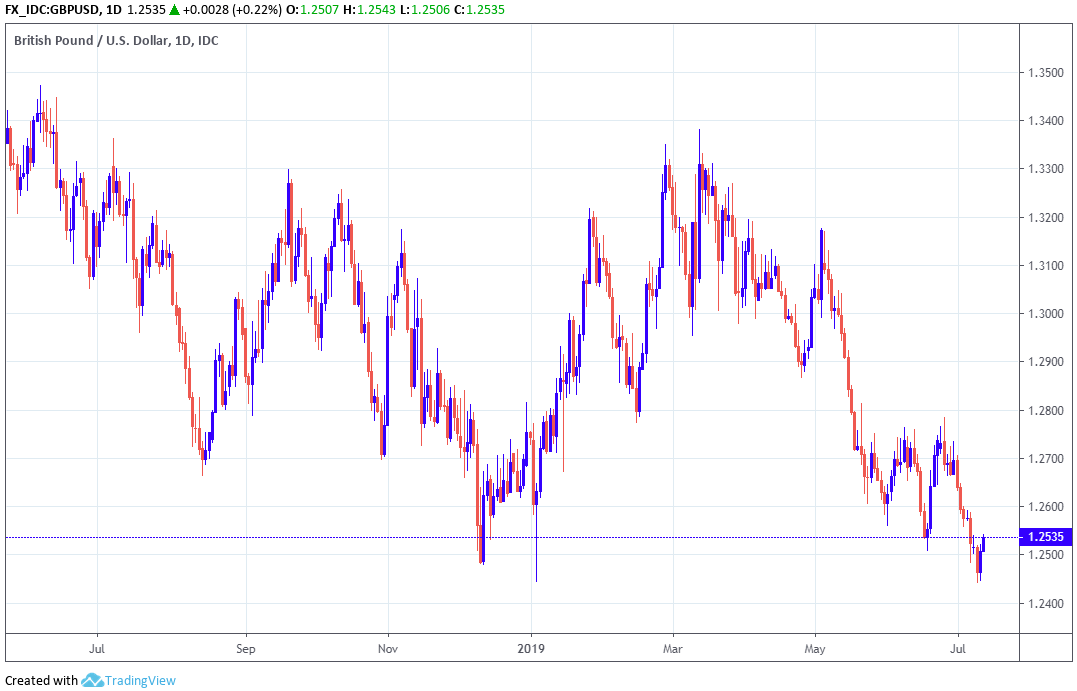 Above: Pound-to-Dollar rate at daily intervals.

Jones's bullish view on the Pound-to-Dollar rate over the coming weeks is supported by a bearish outlook for the U.S. Dollar, which is widely expected to weaken further ahead of the July 30, which is when markets expect the Federal Reserve to cut its interest rate.

However, some analysts say the Fed is unlikely to deliver the full amount of rate cuts the market is looking for over the coming quarters, which could be made clear by the bank at the end of the month. That would risk undermining the Pound-to-Dollar rate recovery.

But by that time the UK will also have its next Prime Minister because the Conservative Party leadership election is expected to be announced on July 23 and former foreign secretary Boris Johnson remains the frontrunner to succeed Theresa May.

TD Securities, a Toronto-headquartered global investment bank, has analysed the various scenarios that could play out following a Johnson victory and produced forecasts for the Pound-to-Dollar rate under each one. Most suggest that steep losses await Sterling in the Autumn months.

"With the focus on the race for No 10, Brexit headlines are currently in a lull. This is set to change dramatically soon," says Ned Rumpeltin, European head of FX strategy at TD Securities. "One thing is clear: no one, not even the future Prime Minister, knows where Brexit will end up. And while we have views on the relative likelihood of various outcomes, there is no clear end scenario that has a probability anywhere above 50%."

Above: TD Securities graph of key Brexit dates and opinion polls of support for major parties.

Johnson has committed to leaving the EU at the end of the Article 50 extension period whatever the weather upon expiry on October 31. He says he wants to renegotiate aspects of the European Union Withdrawal Agreement brought back from Brussels by outgoing Prime Minister Theresa May, which the EU says it won't do, but that he'll leave under a 'no deal' Brexit if necessary.

The opposition Labour Party and some MPs within the Conservative Party have repeatedly threatened a vote of no confidence in the government if it pursues a 'no deal' exit, which would give way to a period where other parties attempt to form a coalition and in the event they fail, a general election.

However, Boris Johnson has refused to rule out suspending parliament in an effort to circumvent a no confidence vote, which Chancellor Philip Hammond recently described as the only way in which rebels on the government benches could be prevented from helping to bring down their own government.

"We think some degree of this would likely be priced in before the event. The UK government's willingness to take this chance suggests it believes that basic provisions are in place to avoid the most dire outcomes. Despite this, however, the UK has taken a leap - intentionally - into the unknown. Some signs of capital flight emerge with simultaneous declines in UK stocks, gilts, and the currency. [GBPUSD] tests support at 1.1060," Rumpeltin says.

TD says that if Boris Johnson is unwilling to prorogue parliament in pursuit of a 'no deal' Brexit he could call a general election in order to seek a new mandate and to strengthen the Conservative Party's hand in parliament. Alternatively, he could be forced into a general election if the opposition is able to win a vote of no confidence. But both scenarios still result in losses for the Pound. 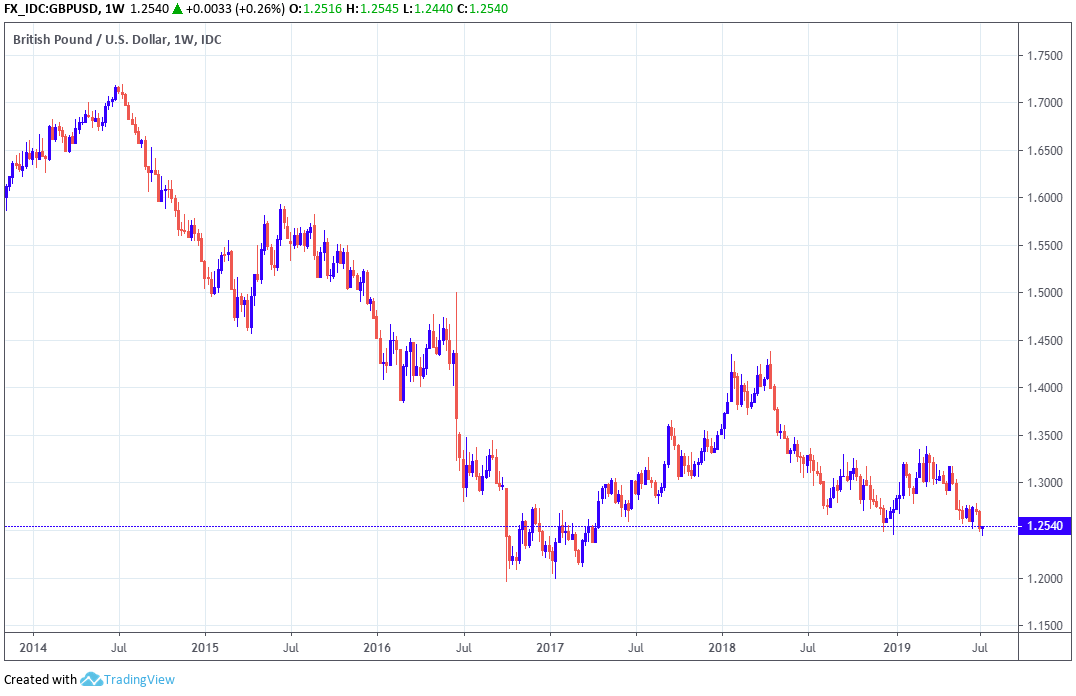 "A successful no-confidence motion lays bare the UK's stark political divisions. This could be among the more difficult scenarios to navigate as it highlights the significant rifts that have developed both across and within the major parties," Rumpeltin says. "We think cable could push below the October 2016 lows (1.1841) toward 1.17 - a level not seen since the mid-1980s."

Rumpeltin says Sterling's losses would be lesser in a scenario where Boris Johnson calls an election, with the Pound-to-Dollar rate resting at 1.21 for a period until the path ahead became clearer. But he concedes that Johnson would only be likely to do that if he thought he could strengthen his hand in parliament, which means he has to campaign for a 'no deal' Brexit mandate to win sufficient support from the electorate.

"Market participants may recall that the Labour party's commitment to the Bank of England's independence has been called into question more than once over the last several years. We would need to see how large and stable a Labour majority would be and what actual policies emerged for the new government, but we think [GBPUSD] could find a base around 1.14," Rumpeltin says.

The most severe losses in an election scenario would be if the Labour Party managed to win a majority or to form a coalition government.

Labour's new promise of fresh negotiations with the EU, presumably after giving a nod to the withdrawal agreement and so-called Northern Irish backstop, followed by a referendum where the choice is between the final 'deal' and remaining in the European Union is positive for Pound Sterling. But the rest of the party's policy agenda, which includes nationalisation of some utilities, is highly contentious with the market.

"Our base case scenario for cable is for spot to close 2019 at 1.30 before heading to 1.36 for the end of 2020. Much of this is a consequence of our expectation for a weaker USD," Rumpeltin says. "These levels represent our best estimate of the risk-adjusted fair value for the GBP over these horizons. Those risks remain very large and very binary however. As a result, our GBP forecasts are subject to more than the usual level of uncertainty."