- Pair is pulling back in established downtrend

- Pound to be driven by Brexit politics; Dollar by inflation data

The GBP/USD rate is trading at 1.2733 at the start of the new trading week, only marginally higher than the week before as relentless Sterling weakness turned to strength following the resignation of Prime Minister Theresa May, leading to a U-bend in the downtrend.

The reaction could have been reflective of a familiar market behaviour of ‘sell the rumour; buy the fact’ - in which traders sell on expectations of a negative outcome and as a consequence the price goes down so much that when the actual news hits the wires the currency is actually left looking relatively cheap, and it starts going up again.

Another reason put forward for the Pound rising after May announced her resignation was that it reduces the ‘uncertainty’ that was May's future.

From a fundamental point of view May’s resignation is only the first step towards the probable swearing-in of a more leave-orientated politician, increasing the chances of a ‘no-deal’ outcome, substantially, and probably leading to more downside for the Pound.

The technical picture is also quite bearish: the pair is in an established and intact downtrend which is likely to extend.

Whilst Friday’s rebound marked the first sign of hope that the relentless downtrend might be reaching a conclusion, it was by no means strong enough to suggest a reversal and further declines are expected eventually. At the most, it is probably the start of merely a sideways market - a pause before the onset of more weakness. 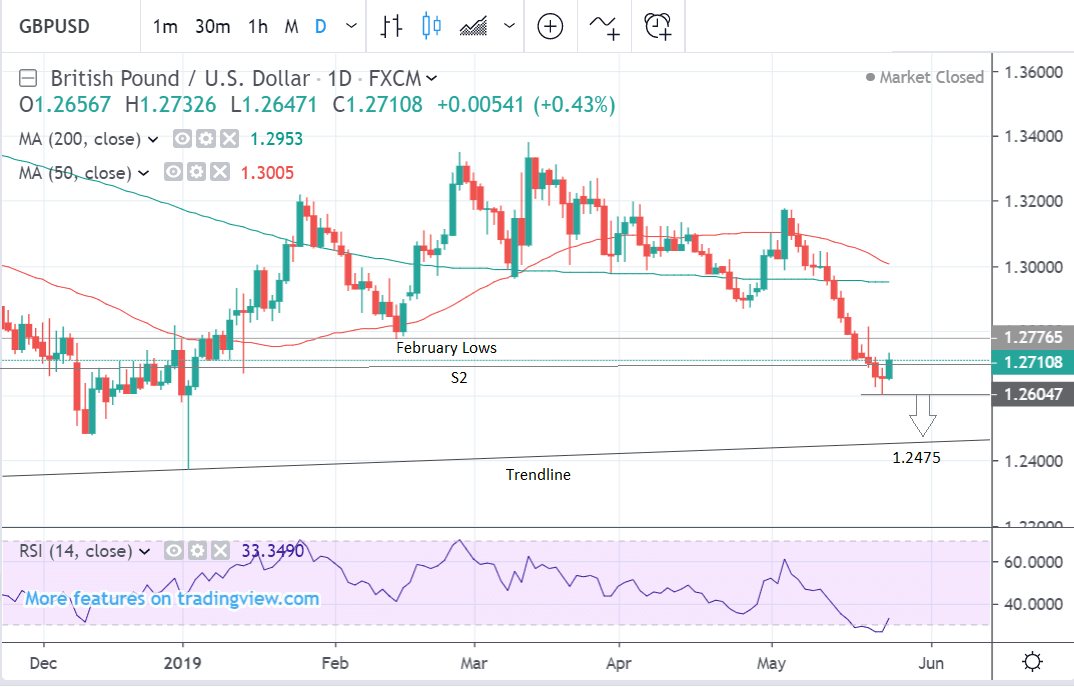 The current correction is likely to find more upside difficult. A tough ceiling is likely to be provided by the February lows at 1.2775, for example. Only a break above those February lows on a daily closing basis would provide evidence of a reversal of the trend.

More likely at this juncture, is that the pair continues to weaken and if it breaks below the 1.2605 lows that would confirm a continuation lower to a target at 1.2475 and the trendline drawn from the key 2016 lows.

The one bullish sign on the chart is the RSI momentum indicator which is indicating that traders should buy the Pound since it has just exited the oversold zone below 30. However alone this is insufficient to signal a reversal of the trend and it is more likely to signal a mere pullback or short-term correction instead.

The main release for the U.S. Dollar in the coming week is the Personal Consumption Expenditure Index (PCE), which is the preferred inflation gauge for the Federal Reserve (Fed) since consumers contribute the largest share of economic growth in the U.S.

If PCE rises is means consumers are spending more and is a sign inflation could be on the rise. The Fed then usually responds by putting up interest rates, which often result in a rise in the currency due to increases net foreign capital inflows.

The PCE in April is forecast to rise by 1.6% compared to a year ago and 0.2% compared to a month ago, when data is released at 13.30 on Friday, May 31. This compares with 1.6% and 0.1% respectively for March. If the result is in line with expectations it is unlikely to impact on the Dollar much given the rate is little changed from the March figure, but if it is higher it could spark a rally, and if lower a decline.

“Should the core PCE price index fail to head higher over the next few months, or worse, drift further lower, pressure would grow on the Fed to cut rates,” says Raffi Boyadijian, an economist at FX broker XM.com.

Another major release for the Dollar will be the second estimate of Q1 GDP growth figures, which is forecast to show a slight slowdown to 3.1% from the flash estimate of 3.2%, when it is released at 13.30 on Thursday, May 30.

If GDP is revised down more-than-expected, the Dollar could suffer because it will reinforce the existing negatively biased outlook; if it rises unexpectedly the Dollar could resume its uptrend.

Beyond these releases, there is a welter of housing data, with the S&P Case-Schiller Composite 20 house price Index forecast to show a slower 2.8% rise when it is released at 14.00 on Tuesday and pending home sales at 15.00 on Thursday which are forecast to rise 0.5% from 3.6% previously, in April.

The other key release for the Dollar is the Conference Board’s consumer confidence index due on Tuesday, which is forecast to edge up from 129.2 to 129.8 in May.

The main focus for the Pound over the coming week will be political, as the European Union election results are published and likely to show the ruling Conservative Party as having suffered a considerable defeat.

Out of 64 MEPs declared so far, Nigel Farage's Brexit Party has won 28, the Liberal Democrats 15, Labour 10, Greens seven, the Conservatives three and Plaid Cymru one.

"With a big, simple message - which is we've been badly let down by two parties who have broken their promises - we have topped the poll in a fairly dramatic style," says Farage on the BBC's Radio 4. "The two party system now serves nothing but itself. I think they are an obstruction to the modernising of politics, and we are going to take them on."

The extent of the defeat suffered by the Conservatives is sizeable and could be important as it may impact decision-making by party members as to who would be the most suitable replacement for Prime Minister Theresa May who resigned last week.

The worse the defeat the more likely the party will choose a potential leader with broad appeal such as Boris Johnson. Johnson is a Brexiteer who has said that if he were PM, we would be leaving the EU on October 31 “with or without a deal”.

The exact line-up of potential candidates will probably be announced within the next week and the selection and their potential impact on Brexit is likely to affect the Pound. Current contenders include Boris Johnson, Andrea Leadsom, Dominic Raab, and Michael Gove, all of which are considered Brexiteers. Jeremy Hunt is the leading remain voting contender, but even he describes himself as a 'born again' Brexiter.

The EU said it has not changed its stance on Brexit after May’s resignation, and that “our position on the withdrawal agreement - there is no change to that,” according to EU spokesperson Mina Andreeva.

A summer of political intrigue lies ahead, and the uncertainty should keep Sterling under pressure.

On the hard data front, the week ahead is expected to be relatively uneventful.

Consumer Confidence is probably the most important release, and is forecast to show a moderation to -12 in May from -13 previously, when it is released at 00.01 B.S.T. on Friday, May 25.

The inflation report hearings on Tuesday morning could also impact the Pound as Mark Carney, the governor of the Bank of England (BOE) and several Monetary Policy Committee members testify on the inflation and economic outlooks before Parliament's Treasury Committee, however, much of what they say will be highly conditional on the outcome of Brexit.

Housing data is highlighted, with mortgage approvals out on Tuesday at 9.30 and the Nationwide house price index is out on Friday at 7.00.