- Break above 1.2739 highs to confirm continuation

The U.S. Dollar starts the new week lower amidst a broadly improved risk appetite amongst investors at the start of the new week thanks to further signs of improvement in U.S.-China trade relations.

Markets welcome signs China remains willing to collaborate on implementing the agreements reached at the G20 summit in November.

U.S. President Trump tweeted on Saturday that he and President Xi Jinping had had a “long and very good call” over the weekend and that “big progress” had been made on a possible trade deal.

"Recently we’ve seen the Dollar weaker against a foreign currency when trade relations between the US and that country have shown signs of improvement," says Lee Hardman, currency analyst with MUFG in London. "If this effect were to reassert itself, we expect the dollar to trade on a softer footing into the start of the New Year. The continued partial US shutdown should also cap positive performance going forward."

The decline in the Dollar allows the Pound-to-Dollar exchange rate to climb to a three-week high at 1.2739, price action consistent with the view Sterling will be preferred to the Dollar over short-term timeframes. From a purely technical standpoint we are overall bullish in our outlook despite the pair having been in a long-term downtrend for most of 2018. Although it briefly broke below the August lows at the start of December it has since recovered and we expect, on balance, for that recovery to continue. 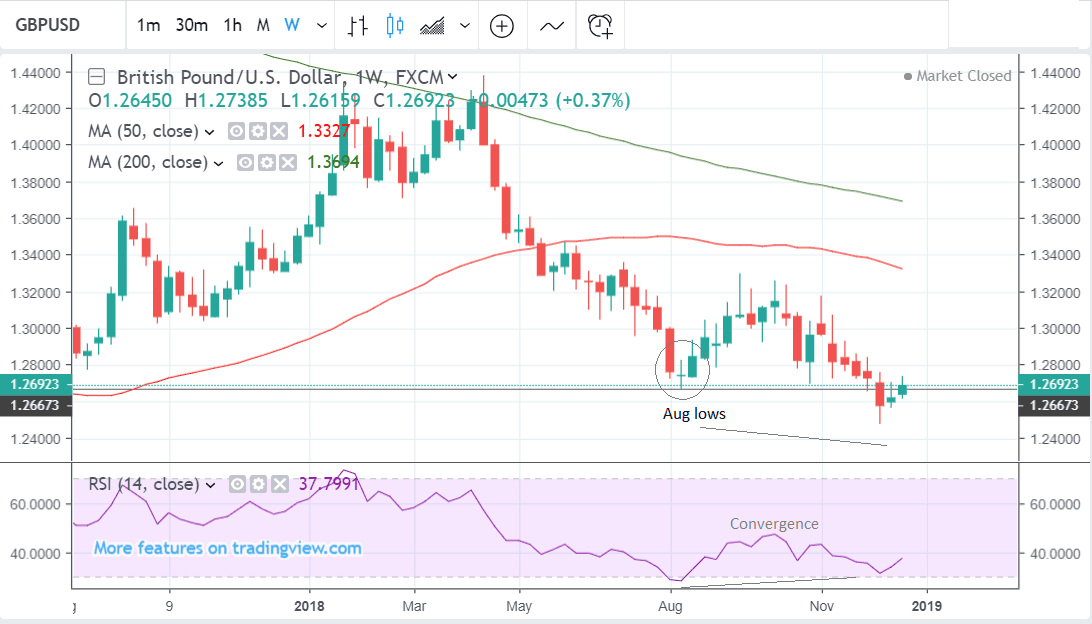 The pair has now climbed back up to the level of the August lows at 1.2668 (and the October lows not much higher). This represents a key make-or-break level. If it can break clearly above these lows it will open the way to a more extensive recovery; if not it could recapitulate back down to the 1.2477 yearly trough.

Momentum is strong and supportive of more upside. It has set up a bullish convergence with price action which suggests a stronger probability of a reversal occurring. Convergence is what happens when the exchange rate falls to new lows but momentum doesn’t. It suggests waning bearish momentum and therefore an increased risk of a rebound. 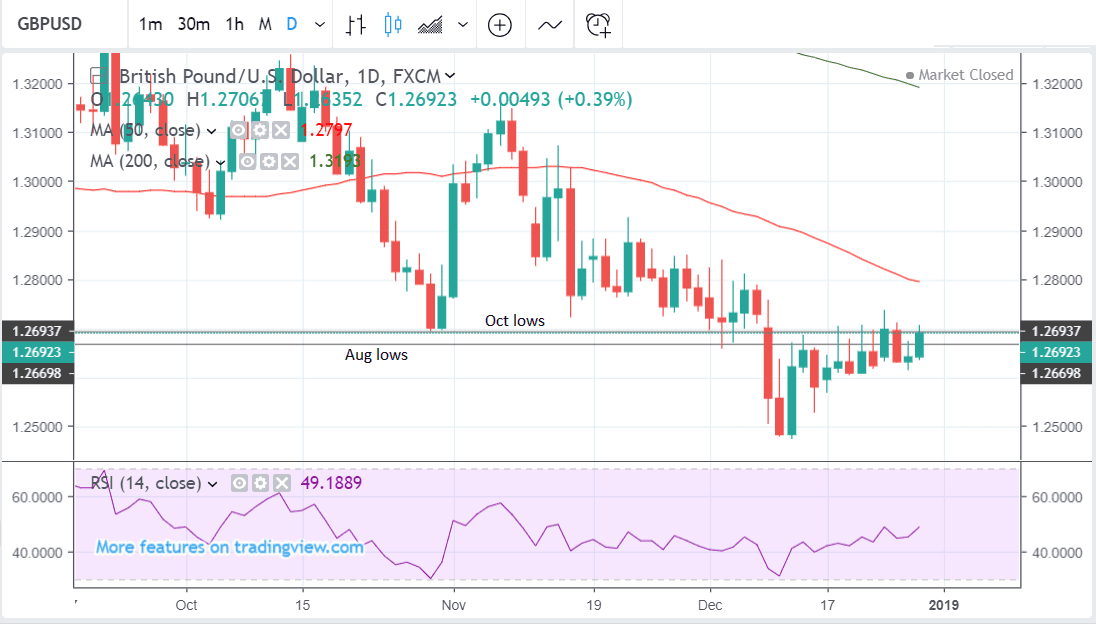 If the recovery looks a little tenuous on the longer-term charts - on the four hour chart, is looks more established, with an uninterrupted sequence of more than two higher highs (HH) and lows (HL) - the first sign denoting the onset of a new uptrend. 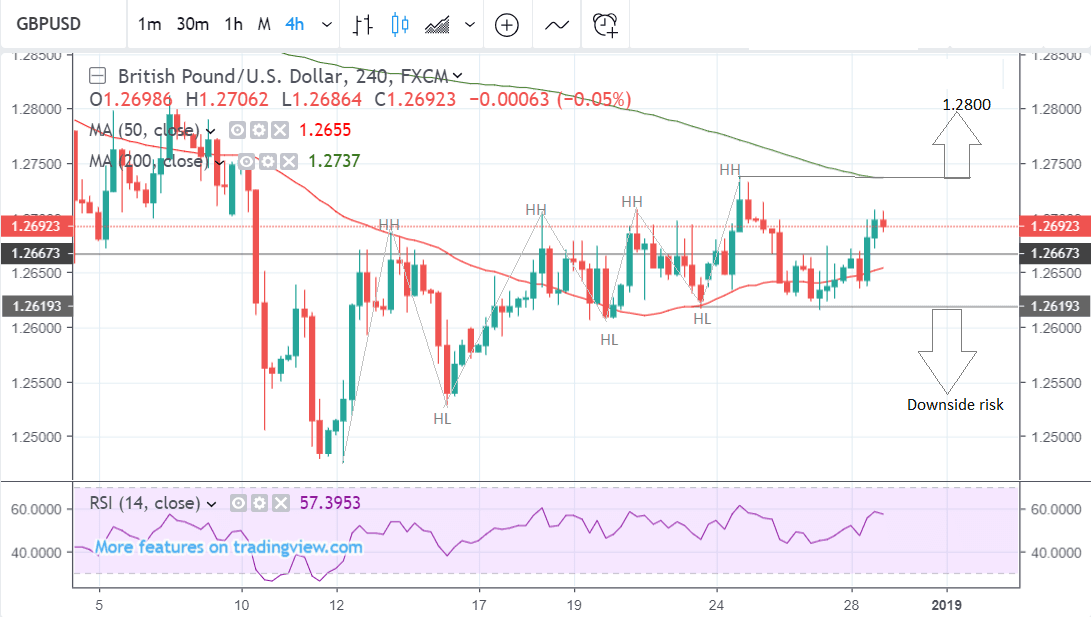 Ultimately all that is required to green-light an extension higher would be a break above the 1.2739 Christmas Eve highs. This would probably be followed by a strong move up to the next major target at 1.2800, just below the level of the 50-day MA.

That the pair managed to remain above the 1.2617 December 21 lows at the last pass, is a positive sign, as a break below would have been very detrimental to the technical picture.

This is because these lows are the last key trough before the Dec 24 peak. As long as the lows hold on a 4hr chart closing basis, however, we remain bullish, with a break above the 1.2739 highs leading to a probable rally up to the next target at 1.2800.

The main release in the week ahead for the US Dollar is Non-Farm Payrolls which is forecast to show a 180k rise in December when it is released on Friday, January 4, at 13.30 GMT.

Other important data released at the same time is the unemployment rate, which is expected to remain at 3.7%, and average hourly earnings is out at the same time and forecast to show a 0.3% rise in December compared to a month ago.

Employment metrics are especially sensitive to economic conditions and given current qualms about the state of the US economy acting as a drag on the US Dollar could impact if they show a wide miss from expectations.

In relation to next week’s releases, analyst Marios Hadjikyriacos at brokerage XM.com sees them as critical in feeding into the current debate about the Federal Reserve (Fed) and the extent to which it will continue with its tightening bias (and therefore pro-Dollar) in 2019.

“The question is whether such figures will be enough to alter the dovish expectations around the Fed, which according to market pricing, is not expected to touch the hiking button at all next year,” says Hadjikyriacos. “Investors seem confident that the latest housing market slowdown will spill over into slower growth in the broader economy soon, keeping the Fed away from hiking.”

In relation to the debate around what the Fed is going to do next year, is likely to be commentary from Fed Chairman Powell when he participates in a debate on Friday, January 4, at 15.15.

“It will be interesting to hear what Fed Chair Powell has to say when he participates in a panel discussion in Atlanta on Friday, and whether he will acknowledge the massive divergence between what his central bank signaled recently (two hikes in 2019), and what markets expect (zero hikes),” say Hadjikyriacos.

The ISM Manufacturing PMI for December is also a major release for the US. It is forecast to show a decline to 58.0 from 59.3 when it is released at 15.00 GMT on Wednesday, January 02. The ISM is a reliable leading indicator for the economy so a greater than expected decline would impact negatively on the Dollar, and vice-versa for a rise.

The Pound What to Watch this Week

The main release for Sterling in the week ahead is probably key sector PMI data for December.

The first sector data scheduled for release is Manufacturing PMI out at 9.30 GMT, on Wednesday, January 2. This is forecast to show a slowdown in manufacturing activity to 52.5 from 53.1. A greater-than-expected slowdown would be bad for the Pound.

Next comes Construction PMI on Thursday at the same time. This is forecast to show a slight fall to 52.9 from 53.4 in December.

Finally, Services PMI is out on Friday at 9.30 and is forecast to show a rise to 50.7 from 50.4. Services is the largest sector in the UK and, thus, is probably the most important of the three. Just like in the case of Manufacturing, a greater-than-expected slowdown would be detrimental for the Pound.

The rest of the data from the UK is unlikely to move the Pound much. Nationwide house prices are out at 7.00 on Friday when they are expected to show a 0.1% rise in December from the previous month.

Consumer credit and mortgage lending data is also out on Friday at 9.30. Consumer Credit is expected to show a rise to £0.95bn in November from £0.9bn in October. Mortgage lending is forecast to fall from £4.1bn to £4.0bn, month-on-month in November.

Brexit headlines are also likely to drive Sterling in the week ahead, although given Parliament is in recess their importance may be more circumstantial than key.

Those looking to lock in a good GBP/EUR exchange rate ahead of a potentially volatile month and year should do so over coming days as we expect volatility to be relatively low ahead of the key Brexit vote mid-month. If you lock in an exchange rate for a major international payment you can set aside any concerns on what this volatility might deliver, find out more here.