The Euro-to-Dollar exchange rate enters the new week with more work to do in order to draw a line under its June sell-off but with the market’s optimistic outlook for Federal Reserve (Fed) policy setting a high bar for further Dollar gains, the Euro could yet stabilise over the coming days.

Europe’s single currency appeared to arrest a Fed-induced sell-off last week when turning higher from around the 1.1850 level and a point on the charts which coincides closely with its 55-day moving-average, although the Euro-Dollar exchange rate was unable to recover meaningfully.

Euro-Dollar was lifted on Friday by widespread declines in U.S. exchange rates but was unable to get above even the initial 23.8% Fibonacci retracement of its June decline located just beneath 1.1950, failing several times last week.

“EUR/USD still has the 1.1847 current June low, made close to the early March low and the 78.6% Fibonacci retracement at 1.1836/24, in its sights and will continue to do so while it remains below the 200 day moving average at 1.1998,” says Axel Rudolph, a senior technical analyst at Commerzbank

“Further down the April 5 low sits at 1.1738 and the March low can be spotted at 1.1704,” Rudolph says, before warning of a possible decline toward the latter level over a one-to-three week horizon. 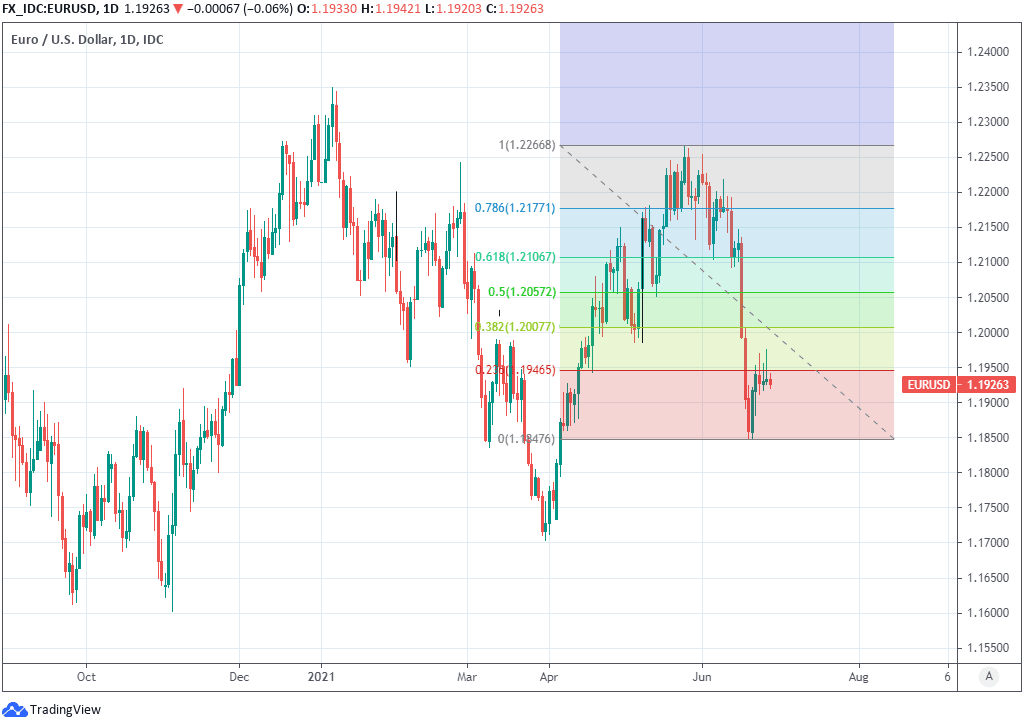 Above: Euro-Dollar rate shown at daily intervals with Fibonacci retracements of June decline.

The Euro enters the new week with 1.1950 acting as overhead resistance and will be dependent for stability on whether the market reads several key pieces of U.S. economic data due out over the coming days as supporting its increasingly ‘hawkish’ outlook for Federal Reserve monetary policy.

“We would caution against extrapolating the hawkish Fed signal too far, ahead of the substantial deceleration we expect into 2022. For now, we stay on the sidelines in G10 vs USD,” says Zach Pandl, co-head of global foreign exchange strategy at Goldman Sachs.

“In our revised forecasts, EUR/USD reaches 1.20 in 3m, 1.23 in 6m, and 1.25 in 12m. Over the near-term, our forecast that EUR will move sideways partly reflects our expectation that the FOMC will hold off on any announcement around tapering its bond purchases until Q4,” Pandl adds.

Financial markets have begun to wager since this month’s Fed policy announcement that there’s a greater chance of the Fed raising rates in late 2022 than in the 2024 year that most Federal Open Market Committee members had flagged as likely until revising the bank’s dot-plot of policymakers’ expectations this month, which is a notion that sets a high bar for the Fed outlook to become any more supportive of the Dollar.

With Fed Chairman Jerome Powell and other senior members of the FOMC pushing back last week against the market’s expectation of at least two interest rate rises by late 2023, the extent to which this week’s economic data can improve expectations of the Fed and discourage investors from betting against the Dollar could be limited.

This could in turn be supportive of the Euro-Dollar rate, even if domestic arguments for Euro strength remain thin on the ground, as the Dollar already appeared to be running on fumes before entering the new week.

“No-one expects the EUR to lead this recovery. The ECB has made it clear it does not want to be dragged into premature tightening and we should hear that message in the week ahead from a whole host of ECB speakers,” says Chris Turner, global head of markets and regional head of research at ING.

“The recent FOMC meeting suggests the Fed’s trigger-finger will be a little twitchier when it comes to tapering, but unless the NFP figure comes in close to the one million mark, financial markets will probably be set fair for a low volatility summer,” Turner adds.

The highlight of Europe’s week ahead comes on Wednesday when Eurostat will release its estimate of June inflation, although few if-any analysts see one month’s worth of prices data as likely to provide the single currency with cause for celebration. 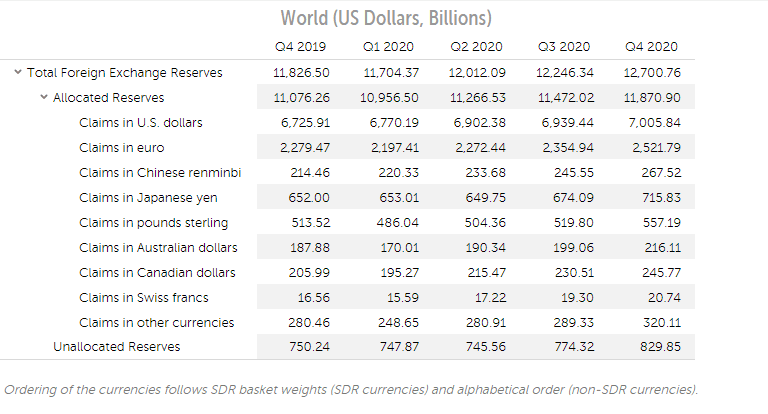 Beyond here the highlights are the most recent Composition of Official Foreign Exchange Reserves (COFER) report from the International Monetary Fund (IMF) which is due out mid-week ahead of Thursday's Institute of Supply Management Manufacturing PMI survey and Friday's non-farm payrolls report.

The IMF report could be supportive of the Euro-Dollar rate if it shows the single currency benefiting from any continuation of the recent decline in the Dollar’s share of the global foreign exchange reserve basket, although the likely effect of the PMI survey and payrolls report is less clear.

“A strong result could keep the Fed’s pivot front-and-centre, creating additional near-term upside pressure on the dollar. That said, we do not think a hawkish Fed pivot on its own merits a shift towards a broadly positive USD outlook,” says Paul Robson, European head of G10 FX strategy at Natwest Markets, who forecasts the Euro-Dollar rate to rise to 1.25 this summer.

“We saw a strong set or Euro area PMIs and other survey data this week, showing a strengthening service sector and strong manufacturing growth. The data provided support to the idea that discussion about PEPP tapering can start after the summer break. Reports this week suggested that the ECB’s review may be concluded before, rather than after, the September meeting. We thus keep to our view that EUR/USD strengthens to 1.25,” he adds. 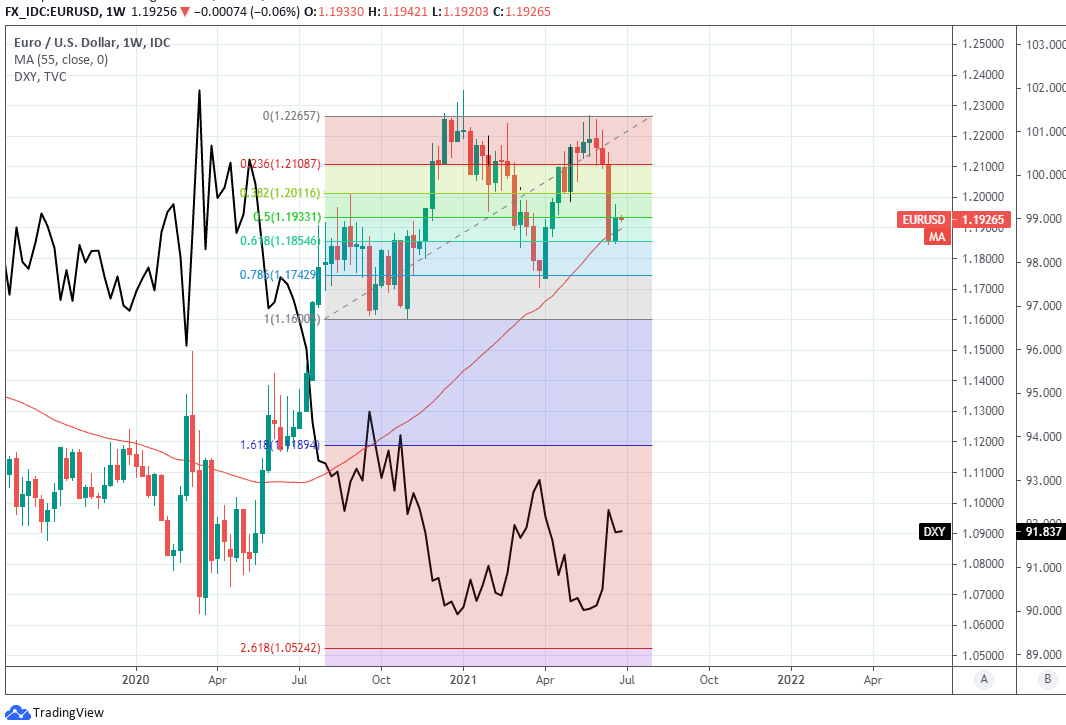