- But analysts say interest rates to fall much further before any QE.

- But BMO forecasts Kiwi recovery in 2019, large gains over the GBP.

The New Zealand Dollar was softer Tuesday after the Reserve Bank of New Zealand (RBNZ) was reported to be contemplating how it would implement "unconventional" monetary policy measures such as quantitative easing, at the beginning of an important week for currency markets.

RBNZ staff are in the process of revising their strategy for stimulating the Kiwi economy in the event that radical action is required at any stage, Bloomberg News reported Tuesday, briefly wounding the New Zealand Dollar.

"It should surprise no‑one that a central bank is prudently planning for the possibility of using unconventional monetary policy measures. NZ swap rates decreased modestly by 2bp. In the absence of any news, we expect NZD to claw back its losses," says Joseph Capurso, a strategist at Commonwealth Bank of Australia (CBA). 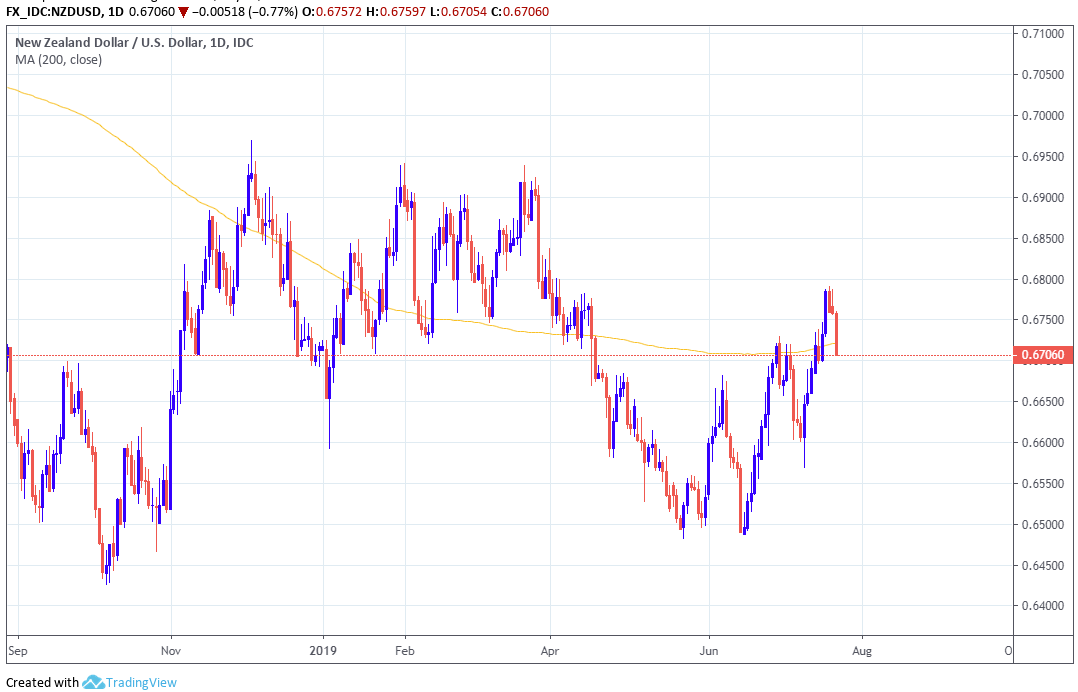 Tuesday's Bloomberg report comes as markets are busy attempting to fathom which of the developed world's central banks will win a so-called race to the bottom, which describes a recent herd-like move to either reduce interest rates or at least prepare investors for cuts at a later date.

A global economic slowdown that's been building for around a year now was the original impetus for the central bank shift because a weakening growth pulse threatens to undermine the inflation pressures that were in many cases, already judged to be far too low for comfort.

Now, with the economic tide in retreat and inflation targets in doubt, central banks are positioning to cut interest rates and potentially go further. The RBNZ cut its cash rate to a new record low of 1.5% in May, citing below-target inflation and a souring economic outlook, although markets are looking for a further two cuts before the year is out.

"The Great Central Bank Race to the Bottom has taken yet another step into dovish territory," says Ned Rumpeltin at TD Securities. "NZD is the day's worst performer with spot (-0.6%) pushing lower to test the 200dma (0.6723). We are cautious, however, and do not read too much into today's announcement. With 150 bps of potential rate cuts still in its quiver before hitting the zero mark, the RBNZ still has quite a bit of conventional policy space." 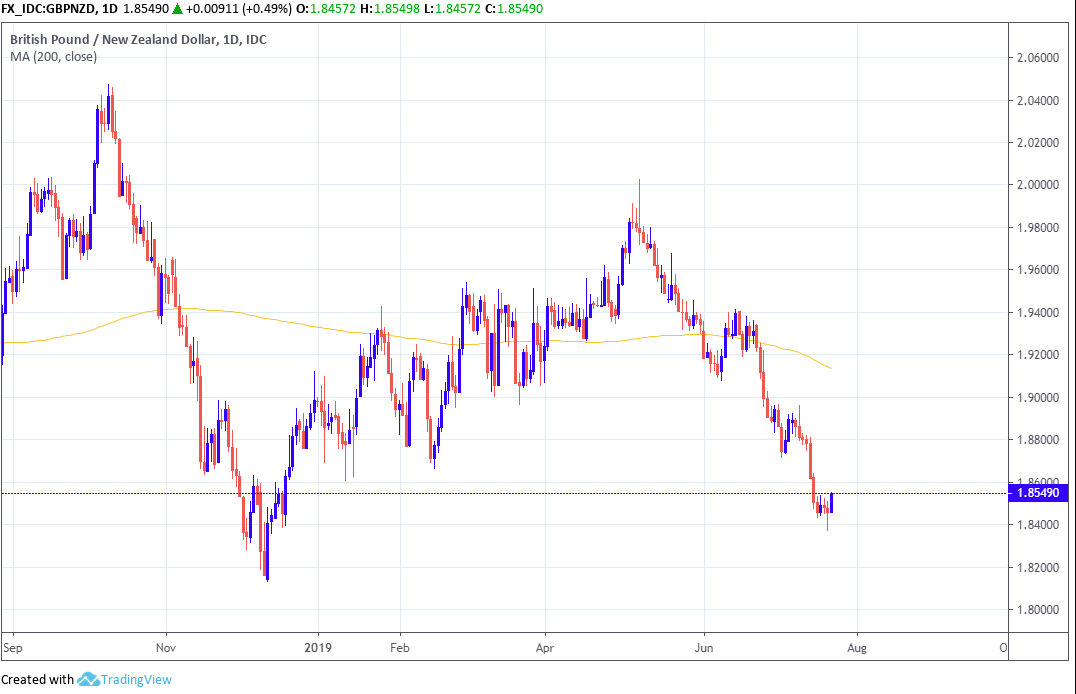 New Zealand inflation came in at an annualised 1.7% for the second-quarter last week, which is below the coveted midpoint of the 1%-to-3% inflation target, and GDP growth slowed from 3.1% to 2.8% in 2018 with much of the deceleration coming in the final half.

Kiwi growth slowed further to an annualised 2.5% in the first-quarter and many economists forecast that it'll decelerate even more before the curtain closes on 2019. And the RBNZ is already expected to fall to 1% by year-end.

The RBNZ is obliged to use interest rate policy to ensure inflation, which is sensitive to growth, averages around 2% over the medium term. Changes in rates impact currencies because of the influence they have over capital flows.

Those flows tend to move in the direction of the most advantageous or improving returns, with a threat of lower rates normally seeing investors driven out of and deterred away from a currency.

"While the RBA’s Kent suggested that there was a low likelihood of QE in Australia, the RBNZ is looking into unconventional policy strategies should the economy weaken further from here. The RBNZ seems to be opening room to manoeuvre, thus heading towards an easier approach relative to the RBA. AUDNZD is set to rally from here towards the top end of the channel around 1.05 initially," says Hans Redeker, head of FX strategy at Morgan Stanley. 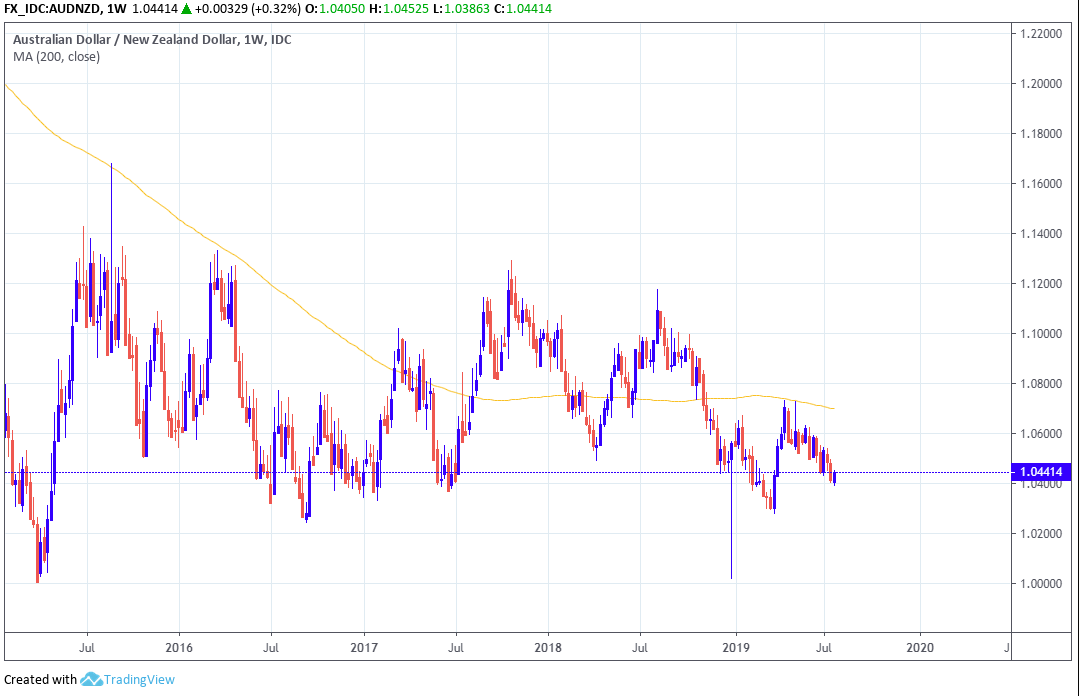 Much like with every other G10 currency the outlook for the Kiwi Dollar is uncertain and contingent in part on what the Federal Reserve does on July 31. Markets are betting the house that the bank will cut U.S. rates this month but they're unsure whether it'll go for a 25 basis point cut or something larger.

If U.S. GDP data due out Friday shows the economy puttering along at a steady pace, rather than slowing sharply as some have envisioned, then markets could be forced to revise their expectations in favour of a lesser number of Fed rate cuts being delivered over the coming months.

That might support the U.S. Dollar and hurt the Kiwi.

However, if the growth data confirms what markets have feared, that the U.S. trade war with China is beginning to hurt the world's largest economy, then markets could demand a large 0.5% cut to 2% in the Federal Funds rate and the Fed itself may ultimately deliver it.

"The RBNZ and RBA were the vanguard easers in this cycle; we expect them to ease again and there could be others," says Stephen Gallo at BMO Capital Markets, in a note to clients. "We expect the RBNZ to cut again at its August meeting and then hold through the remainder of 2019. The market has 21bps of rate cuts priced in for August and 39bps priced in through the end of 2019."

Gallo and BMO are optimistic in their outlook for the New Zealand Dollar this year as they're forecasting it to retain its current level against the U.S. Dollar for the next three months and to rise back to the 0.69 handle in six-months time.

They project steep losses for the Pound-to-Kiwi rate, which is seen declining to 1.82 in three months and 1.73 in six-months time. The latter would mark Sterling's lowest level against the Kiwi since July 2017.

The ECB will announce its latest interest rate decision at 12:00 London time Thursday and will follow up with a press conference during which any policy measures will be explained in further detail. U.S. GDP data for the second quarter will be released at 13:30 on Friday and could impact the outlook for the Federal Reserve. Both events will be instructive for currency traders over the coming weeks and months.

The British Pound is likely to see its upside potential capped against the New Zealand Dollar over coming days amidst the market's evolving belief that upcoming EU-UK trade negotiations will be tense and that the coronavirus outbreak is fading in severity.