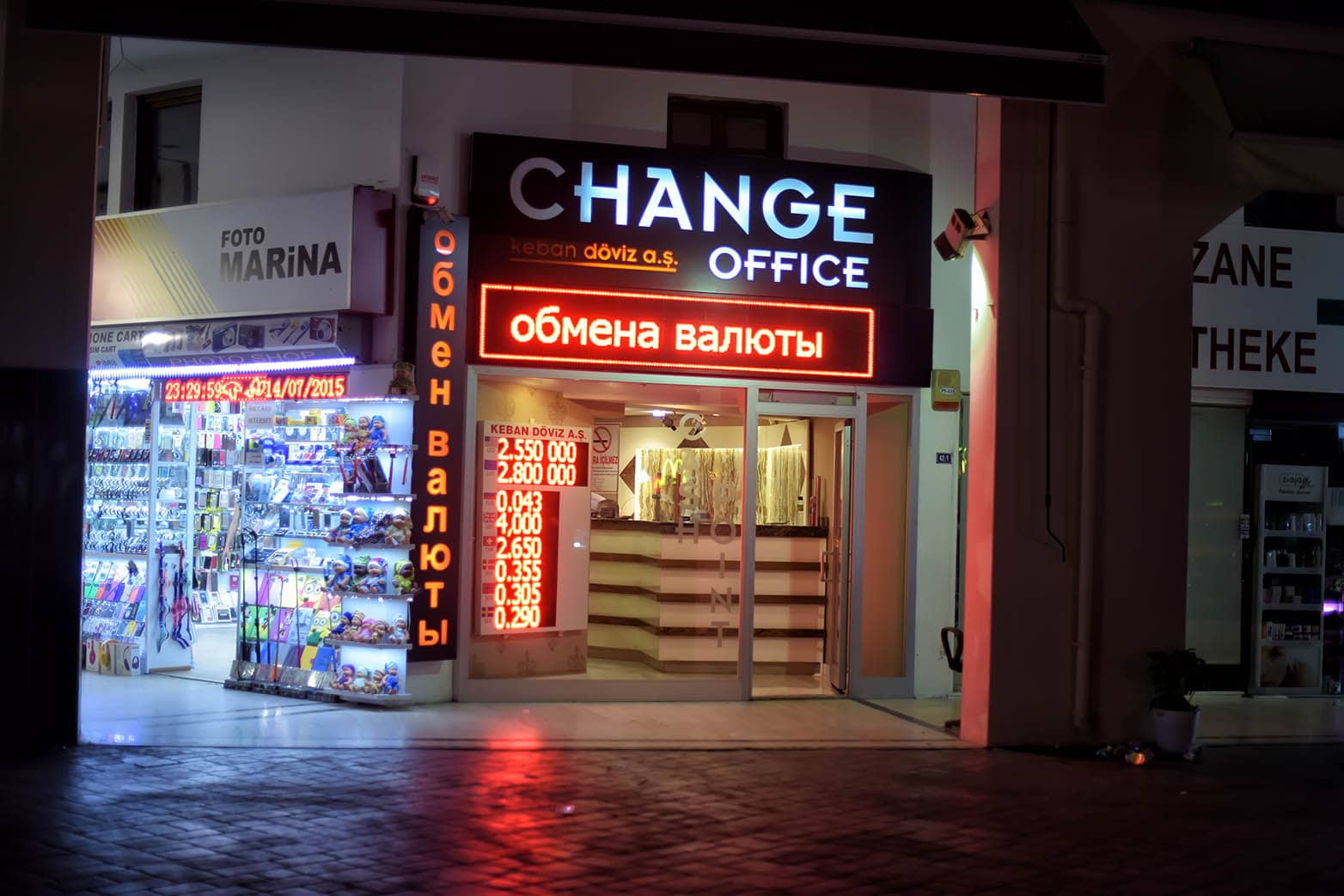 The Turkish Lira softened ahead of the weekend but has been an outperformer for the month of August and remained close to an important resistance level against the Dollar, any overcoming of which could lead to even further declines in USD/TRY as well as GBP/TRY.

Turkey’s Lira ceded ground to all major developed and emerging market currencies on Friday even as the U.S. Dollar softened against commodity currencies and others that are generally perceived by investors as more risky propositions, although there’s fundamentally sound reasons for this.

Friday’s U.S. Dollar declines were accompanied by further gains for crude oil prices and these are a meaningful contributor to the high levels of inflation that have bedeviled the Turkish economy and currency for years now, which may be why the Lira was on its back foot.

“The retreat in Brent crude below $70/bbl is a tonic for the currency due to Turkey's net oil importer status. Technically, the next support below 8.40 lies at 8.26 for USD/TRY,” says Kenneth Broux, a strategist at Societe Generale.

“Demand for the currency is also replicated in bonds where 10y TURKGB yields have declined 25bp over the past week, the most of any EM region,” Broux wrote in a note to clients last week.

While Turkey’s Lira underperformed on Friday, it was still one of the top performing currencies on the market for the month of August; a period in which the U.S. Dollar has strengthened against all of the G10 and major emerging market currencies. 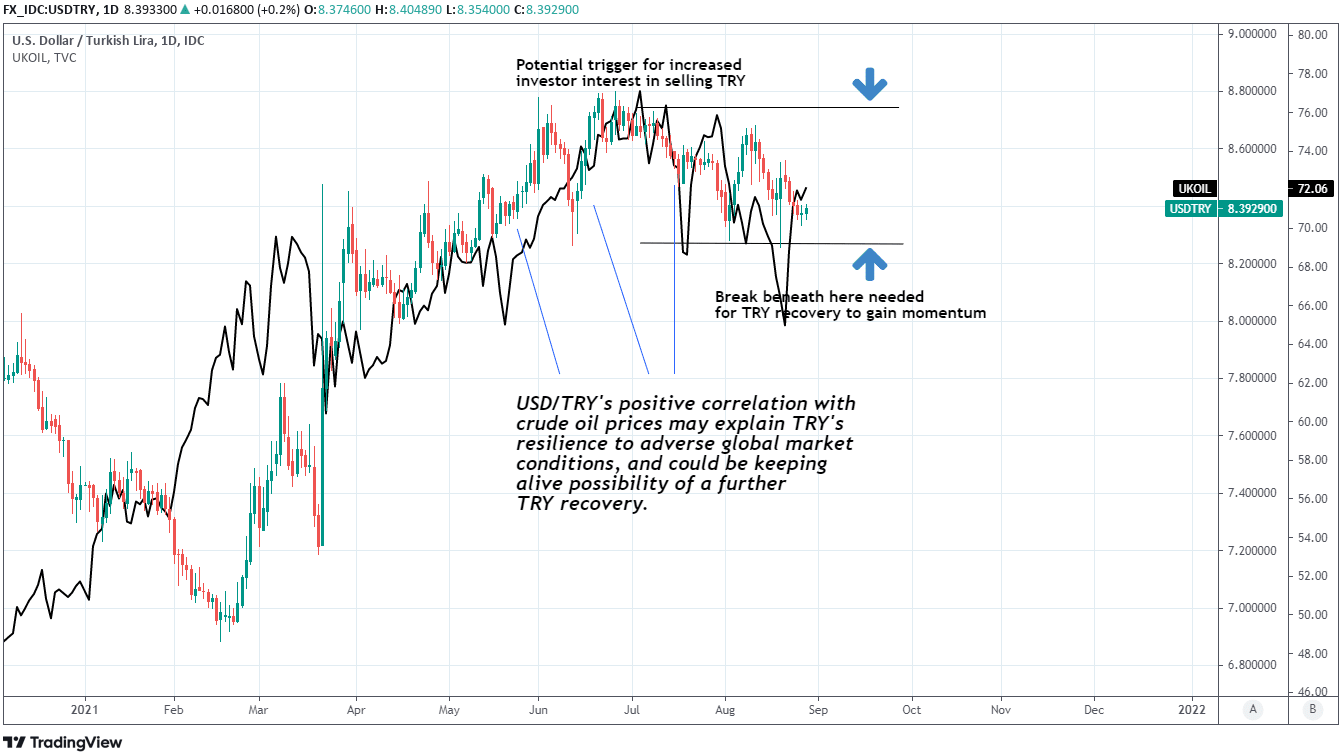 Above: USD/ZAR shown alongside Brent crude oil price with support and resistance levels flagged by Societe Generale marked out.

Contrary to what is typically the case for emerging market currencies Turkey’s Lira has strengthened alongside the greenback even with investors’ fears for the outlook for the global economy mounting, and expectations for a tapering of the Federal Reserve quantitative easing programme solidifying.

The stronger Dollar, global growth concerns and political complaints from the U.S. leadership about the earlier elevated level of prices have all impacted the oil market, leaving Brent crude -3% lower for the month even after a 10% gain this last week while seemingly lifting the Turkish Lira.

“Inflation is due to decline more substantially in the last two months of the year. This should lead to a meaningful improvement of the real yield profile, but how aggressively CBRT responds with policy rate cuts at that time will be crucial,” says Anezka Christovova, an analyst at J.P. Morgan.

“Current real yields are insufficient to compensate for the risk profile of the currency, in our view. The real policy rate deflated by %yoy headline inflation is now close to zero, while adjusted for %yoy core inflation, it is 1.8%,” Christovova adds.

Oil declines have been widely cited by analysts as a tailwind for currencies of oil importing economies, and if sustained over the coming months they could enlarge and reinforce an already-anticipated decline in Turkish inflation toward year-end.

This would be further supportive for the Lira if it helps to cultivate a real-terms or inflation-adjusted yield offering to international investors, expectations of which could potentially lead the USD/TRY rate to remain under pressure in the coming weeks.

To the extent that this pressure remains then above-referenced support level at 8.26 for USD/TRY could be vulnerable to breaking and such a price development would have bearish implications for the Pound-to-Lira exchange rate, which always closely reflects the relative performance of the Lira and Pound when both are measured against the Dollar; in other words the relative performance of USD/TRY and GBP/USD.

The Pound-to-Lira rate would fall from 11.51 on the interbank market this Friday to 11.36 and below if USD/TRY returns to the recently-tested low of 8.26l referenced by Societe Generale and if at the same time, the stronger Dollar kept GBP/USD pinned down beneath this week’s highs near 1.3750.

Pound-to-Lira declines would likely build with any additional losses in USD/TRY or gains for the Lira, while being tempered in the event that Sterling’s main exchange rate GBP/USD also manages to climb alongside the Lira over the same period.

“With the TCMB refraining from a premature rate cut and keeping its funding costs broadly stable, we have turned less bearish on Turkish assets. That said, although we now consider the economy to be on a relatively more sustainable growth path, we think it is too early to turn constructive,” says Kevin Daly, co-head of CEEMEA economics at Goldman Sachs in an August note. 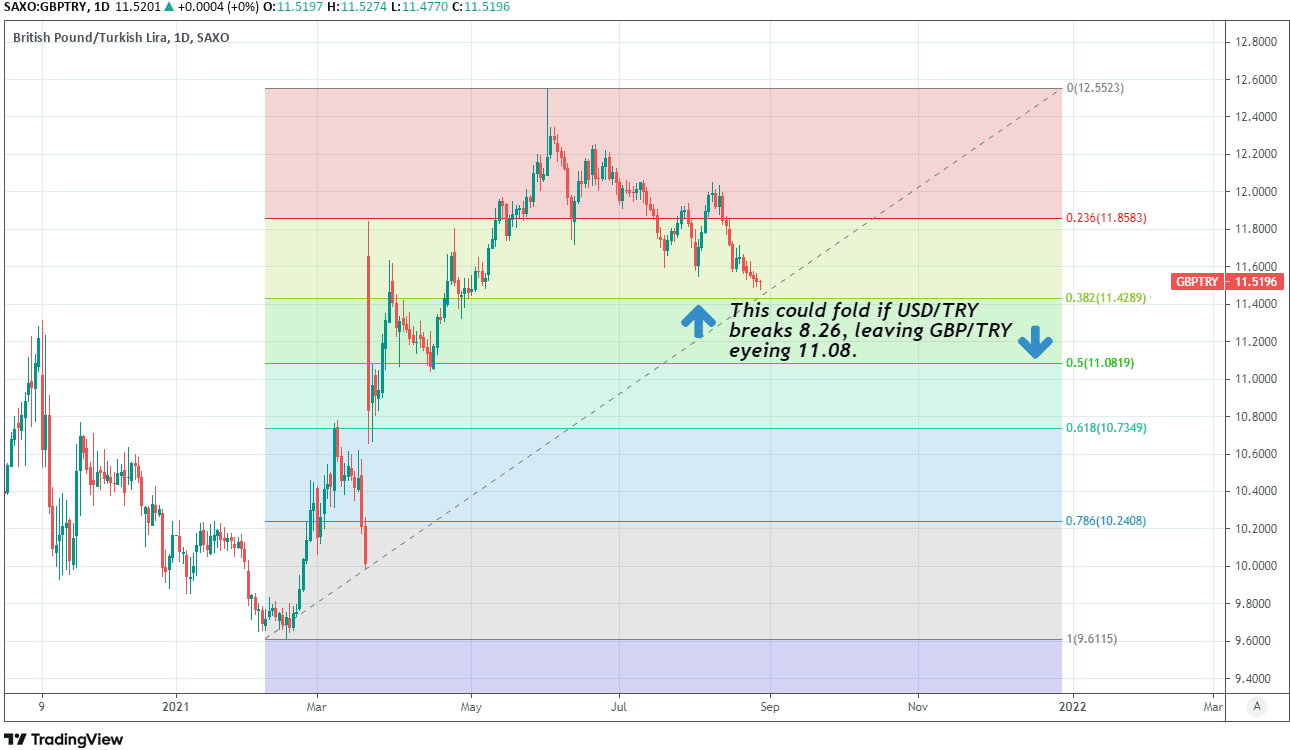 Above: Pound-to-Lira exchange rate shown at daily intervals with Fibonacci retracements of 2021 rally. Any decline below 11.42 opens the door for losses to 11.08 and Sterling’s lowest level since April 2021.

Much still depends however, on not only the forthcoming developments in oil prices but also the Lira’s relationship with the Dollar and most importantly, policy decisions at the Central Bank of the Republic of Turkey (CBRT).

“It is positive that the central bank has so far resisted any temptation to ease policy prematurely,” says J.P. Morgan’s Christovova. However, high inflation and low real yields are likely supporting continued dollarization demand with FX deposits of locals growing about $11bn since early April.”

Recent years have seen a damaging cycle of apparent political intervention at the central bank in pursuit of lower interest rates, which has prompted repeated bouts of sharp currency depreciation and lifted inflation rates further; ultimately compelling a more prolonged period of even higher interest rates in each instance that has left the market deeply sceptical of Turkish authorities and doubtful of the Lira’s prospects.

Currency depreciation relating to CBRT policy is widely believed to have heavily depleted the bank’s foreign exchange reserves, which is why the Lira may have benefited this month when the bank announced a new currency swap agreement with the Bank of Korea, which supplements existing agreements with the Peoples’ Bank of China and the Qatar Central Bank.

Nonetheless, August’s performance evidences a tentative capacity for the Lira to weather tough market conditions and possibly suggests an improving outlook for the currency, which was already buoyed earlier in August when the CBRT left its 19% cash rate unchanged despite continuing pressure from Ankara for lower interest rates and an endemic scepticism in global markets about whether it could continue to resist.