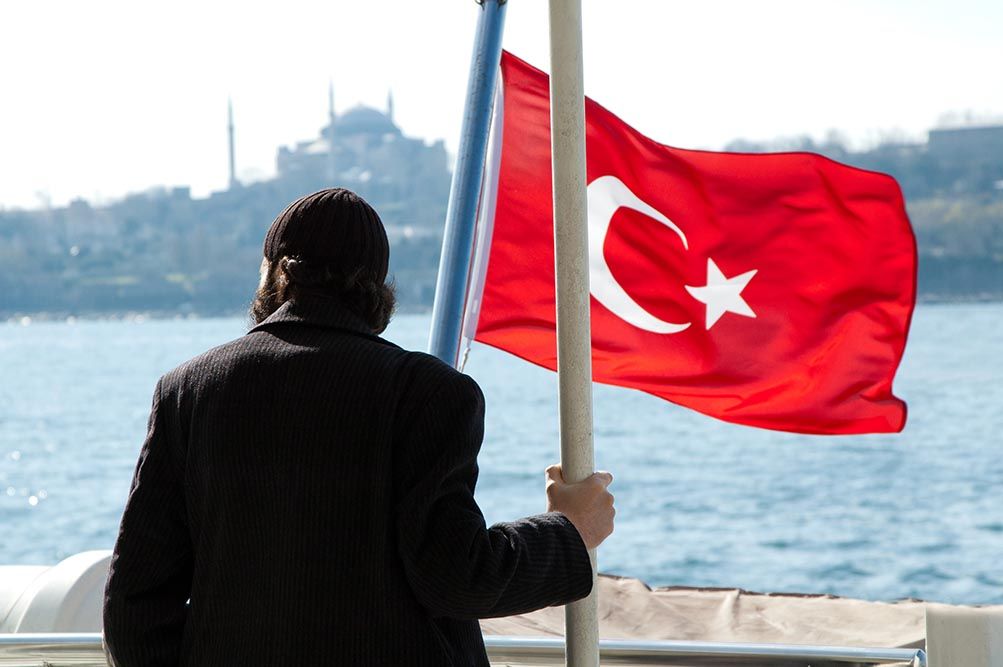 The Turkish Lira took no prisoners on Thursday when sweeping the board of opposition from major developed and emerging market currencies alike after the Central Bank of the Republic of Turkey (CBRT) defied a sceptical market and pressure from Ankara when leaving interest rates unchanged in its latest policy decision.

Turkey’s central bank announced around the same time as its rate decision a new foreign exchange swap agreement with the Bank of Korea that has a three-year term and is worth TRY 17.5 billion and KRW 2.3 trillion, which was equal to around $2BN on Thursday and may have been a contributor to the strong rally evident across the Lira exchange rate complex following the CBRT announcements.

CBRT Governor Şahap Kavcıoğlu and colleagues said Thursday that Turkey’s 19% cash rate would remain in place in line with economist forecasts although the Lira’s rally following the statement potentially betrays market expectations that may have been more sceptical of the consensus given further lobbying by President Recep Tayyip Erdogan during recent weeks for a cut to the cash rate this month.

“We expect consumer inflation to hover near 19% till November before declining to 16% at the end of the year,” says Seda Guler Mert, chief economist at BBVA. “We expect the CBRT to start an easing cycle very gradually in 4Q (depending on the potential market volatility and upside risks on the inflation) and end the year with a 17.5% policy rate.”

Turkey’s central bank reiterated on Thursday the commitment made by Governor Kavcıoğlu following his appointment to post in March for the cash rate and overall CBRT policy stance to remain in place until the significant and sustained falls in inflation envisaged in April’s monetary policy report are borne out in economic data. 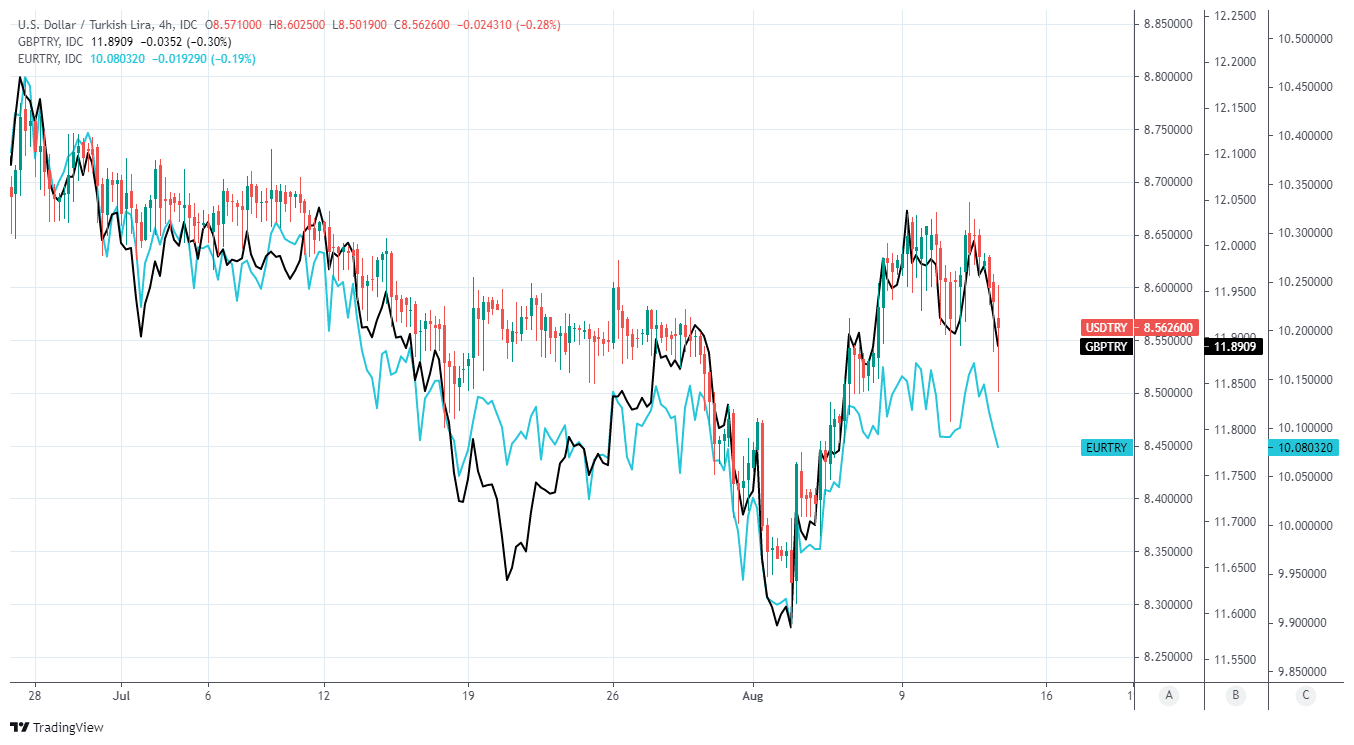 Above: USD/TRY shown at 4-hour intervals alongside GBP/TRY and EUR/TRY.

The CBRT’s commitment is to ensure that future cash rate decisions leave the benchmark for borrowing costs above the rate of inflation, which was 18.95% in July, until the annual rate of price growth has eased enough for the 5% inflation target to be achieved.

“Should inflation continue to rise as expected, the CBRT will be prompted to alter policy in order to maintain its commitment to keep real interest rates positive and promote the disinflationary channel before base effects start to aid their efforts. This has been the demise of previous Governors and could result in the end of Governor Kavcıoğlu’s tenor,” says Simon Harvey, an analyst at Monex Europe.

“Given the large tail risk that is currently attached to the Turkish lira, we continue to hold our bearish TRY forecasts which see USDTRY close out the year at the 9.00 handle,” Harvey says.

Political pressure from Ankara has seen past governors compelled to reduce borrowing costs repeatedly in recent years, each time prompting severe depreciation of the Lira, while Governor Kavcıoğlu’s predecessor Naci Ağbal was removed from post after just a handful of months in late March this year after a days earlier decision to lift the cash rate from 17% to 19%.

The resulting bouts of currency depreciation are widely believed to have heavily depleted the CBRT’s foreign exchange reserves, which is why the Lira may have benefited on Thursday when the bank announced a new currency swap agreement with the Bank of Korea, which supplements existing agreements with the Peoples’ Bank of China and the Qatar Central Bank.

“The political pressure to ease policy is mounting. The real question is not if, but when, the CBRT will strike and attempt to ease policy. Our base case remains the October meeting, but the CBRT could succumb to the pressure even before then,” says Cristian Maggio, head of emerging market strategy at TD Securities in a note ahead of Thursday’s decision. 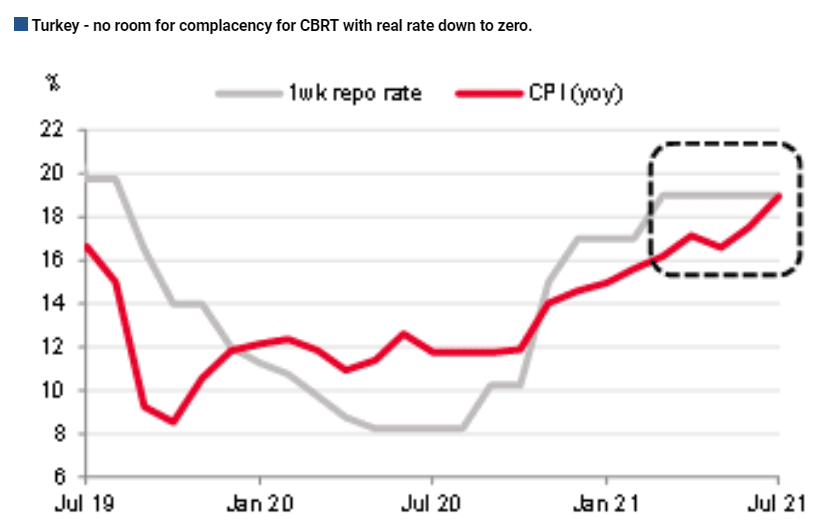 Pressure from Ankara and the resulting turnover at the CBRT has led many market observers and participants to view steep cuts to the cash rate as just a matter of time, and encouraged analysts to stick with forecasts of new record highs for USD/TRY and other Lira exchange rates in recent months.

This is one prospective reason for why the Lira rallied on Thursday as well as for why Turkish exchange rates could go either way in the months ahead.

“The pair recently defended the lower limit of its range near 8.26. So long as this remains defended, a deeper pullback is not expected. Test of the lower band has resulted in a bounce and the pair could head towards the July peak of 8.74. This remains an interim hurdle. Overcoming it can result in the next leg of up move towards 8.80 and projections of 8.95,” says Kenneth Broux, a strategist at Societe Generale.

Thursday’s exchange rate reaction was indicative of a market that was still wagering against the Lira and the CBRT, while widespread forecasts of new record lows for the currency before long only to serve to encourage this a dynamic, although such expectations are a double-edged sword that could yet wound either the Turkish unit or the wider market during the months ahead.

Any eventual abandonment by the CBRT of its commitment to reducing inflation through a “tight monetary policy stance” would be an almost sure fire invitation for the Lira’s detractors to bet with greater stakes against the currency, though a continued steady hand from the CBRT could eventually see exactly these speculative positions squeezed out of the market with a potentially virtuous impact on the Lira.

Societe Generale's analysis suggests the key fault lines in this ongoing tug-of-war will be the 8.26 and 8.74 levels of USD/TRY, with a break below or above either providing a signal as to the direction in which the overall trend and other Turkish exchange rates are likely to develop. 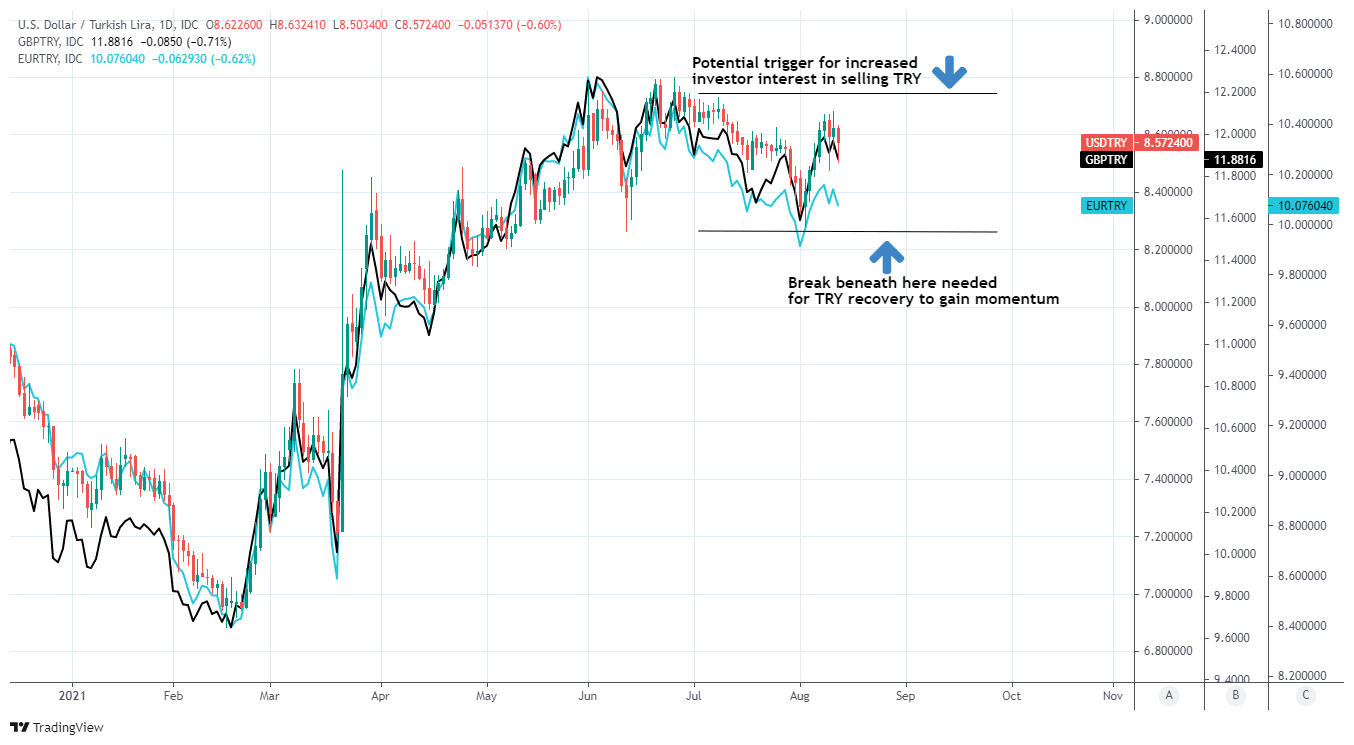 Above: USD/TRY shown at daily intervals alongside GBP/TRY and EUR/TRY.