The Rupee weakened in the final session of the week after official data showed the economy slowing faster than was expected in the third-quarter, leading some analysts to tip further declines for the Indian currency up ahead.

India’s economy grew at an annualised pace of 4.5% in the third quarter, down from 5% previously and when already-pessimistic markets were looking for an increase of 4.7%. The third quarter expansion was the weakest for six years.

"Gross value added in the manufacturing sector fell by 1.0% YoY. Separately, output in India's eight core infrastructure industries (excluding fertilizers) contracted nearly 6.0% YoY in October, following a 5.1% annual contraction in the prior month. This does not bode well for Q4 growth, and it supports our case for additional INR weakness from here," says Stephen Gallo, European head of FX strategy at BMO Capital Markets.

India’s economy has slowed sharply this year and Friday's data confirms that it wasn’t just pre-election uncertainty that drove the downturn. 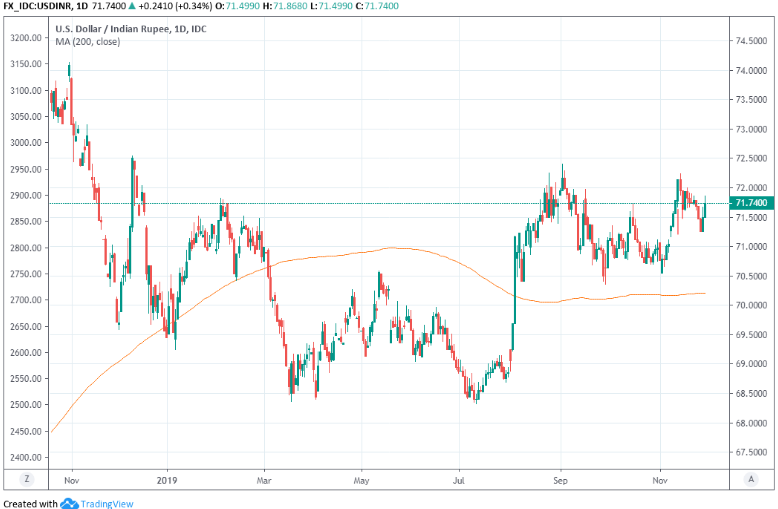 Friday's figures come less than a week away from the next interest rate decision of the Reserve Bank of India (RBI).

The RBI has cut interest rates five times this year in response to the slowdown, after throwing concerns to the wind under new governor Shaktikanta Das, although some economists had seen a sharp rise in inflation during October as being enough to convince the RBI to refrain from cutting its rates again in December. However, Friday’s data may have put that assumption in doubt.

“Staying ahead in the global easing cycle, India's central bank looks poised to cut rates again by 25 basis point next week given that growth continues to be on a steady downward path. Governor Shaktikanta Das is determined to ease for as long as it takes. However, aggressive policy stimulus on both monetary and fiscal sides has started stoking inflation, pushing it above the RBI’s 4% comfort level in recent months, which means this could be the last cut of this easing cycle,” says Prakash Sakpal, an economist at ING. 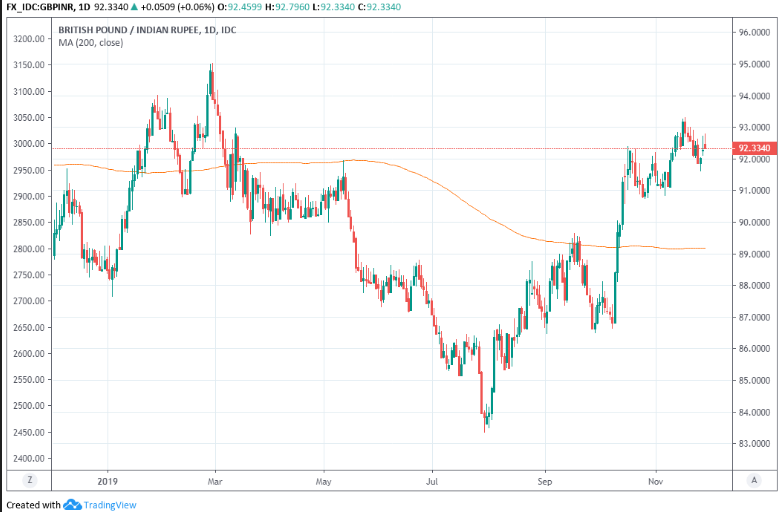 Inflation rose from 4% to 4.6% in October, taking it over the '4% plus-or-minus 2%' RBI target, after a sharp increase in food prices that month. The headline consumer price index is now at 16-month high after food prices paid by consumers increased 7.8% last month, although there could be larger increases than that in store on the road ahead.

“We expect some additional depreciation of the INR vs the USD over the coming 3M & 6M to 73.00 and 74.00 respectively. Although the sluggish near-term inflation dynamic is relatively supportive for the INR, we expect that to be mostly offset by additional RBI easing and efforts from the central bank to stem INR appreciation,” BMO’s Gallo says.

Gallo says the Indian Rupee is overvalued in "real effective terms," which leaves it vulnerable to further declines, and forecasts the RBI's cash rate will be cut to 4.9% over the coming months. The RBI's cuts have left India cash rate at 5.15%, its lowest in nearly ten years, and have helped to undermine the Rupee. The Indian currency has fallen more than 3% against the Dollar this year and nearly 5% against Pound Sterling this year.