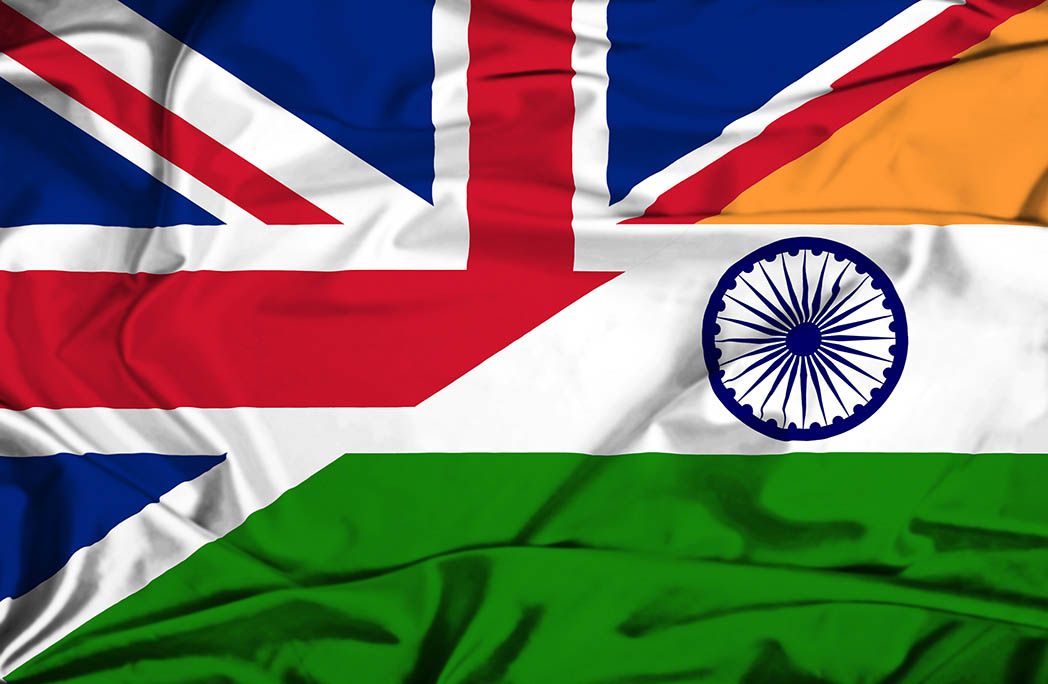 - Rupee to be driven by global sentiment and oil market

GBP/INR is trading at around 88.06 at the start of the new week about half a percent higher than a week ago, nevertheless, studies of the charts suggest the exchange rate is set to resume its downtrend and move lower in the days ahead.

Looking at the 4-hour chart, the pair failed to pierce and stay below key support at the ‘neckline’ of a major topping pattern, at circa 87.70. Instead prices fell temporarily to 87.31 but then rose back up over the last week and formed a three-wave abc correction in the process. 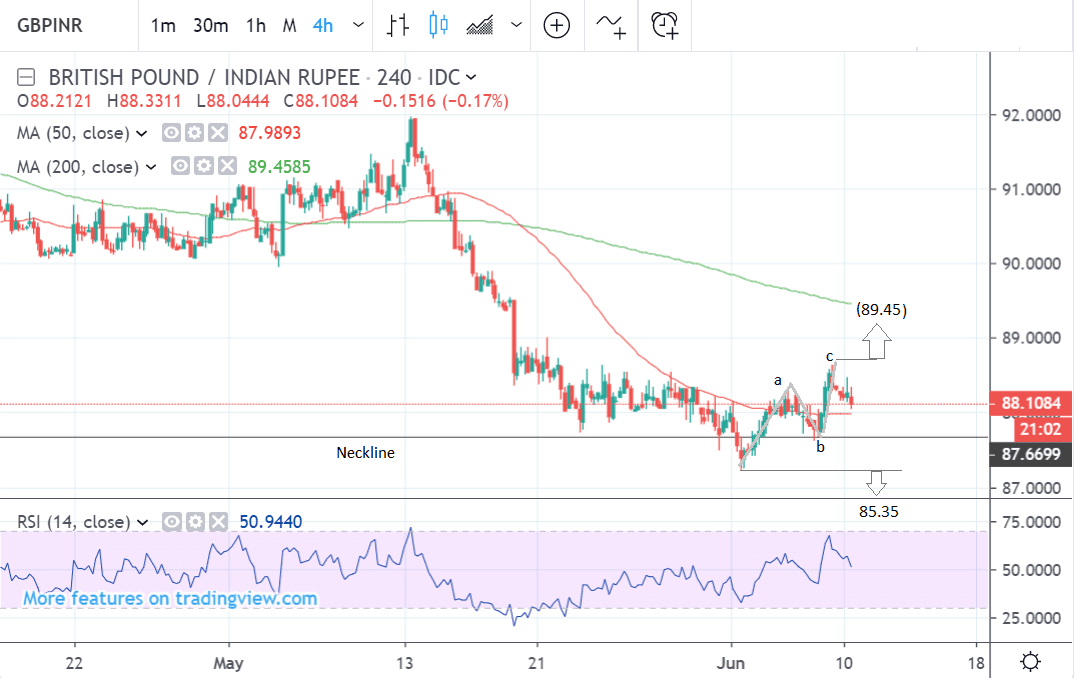 We use the 4-hr chart for short-term analysis which is defined as the next 1-5 days.

The abc now looks complete and there is an increasing chance prices could resume going lower again.

A break below the former lows at 87.31 would provide confirmation a downside break and probably be followed by a steep descent to the short-term target of 85.35.

The daily chart meanwhile shows a steep decline preceded last week’s correction. Price action could be interpreted as having formed a ‘bearish flag pattern’ which would indicate the likelihood of more downside over the medium-term horizon. 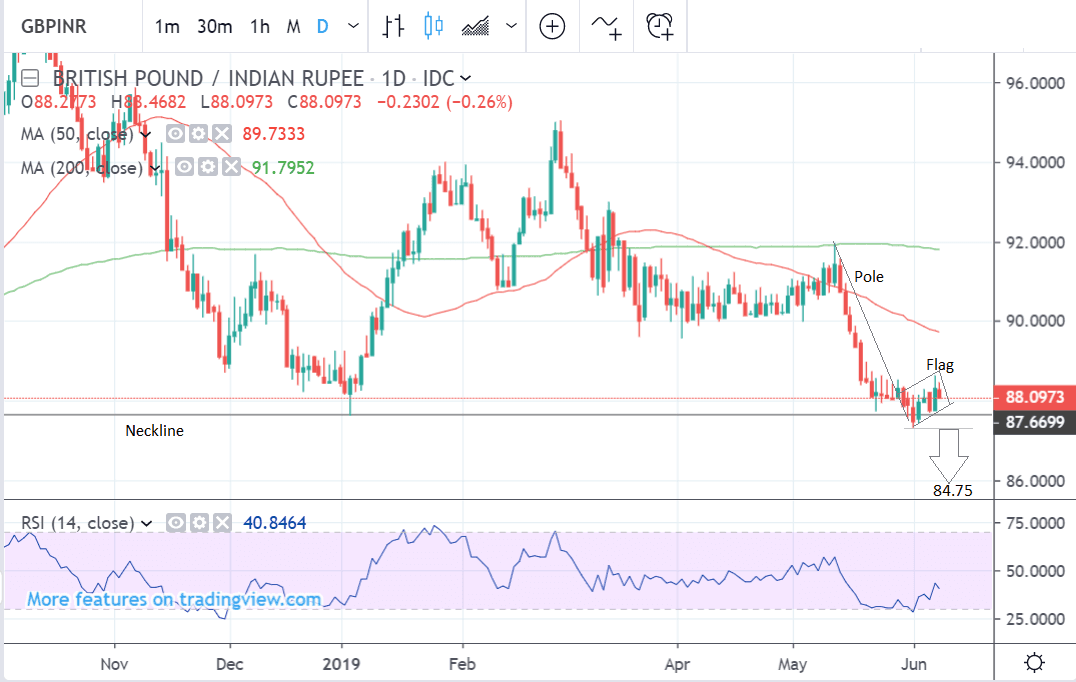 Once again our view is that a break below the 87.31 lows would signal more downside, probably to a target at 84.75.

On the weekly chart GBP/INR has formed a bearish head and shoulders (H&S) reversal pattern which is very negative sign. 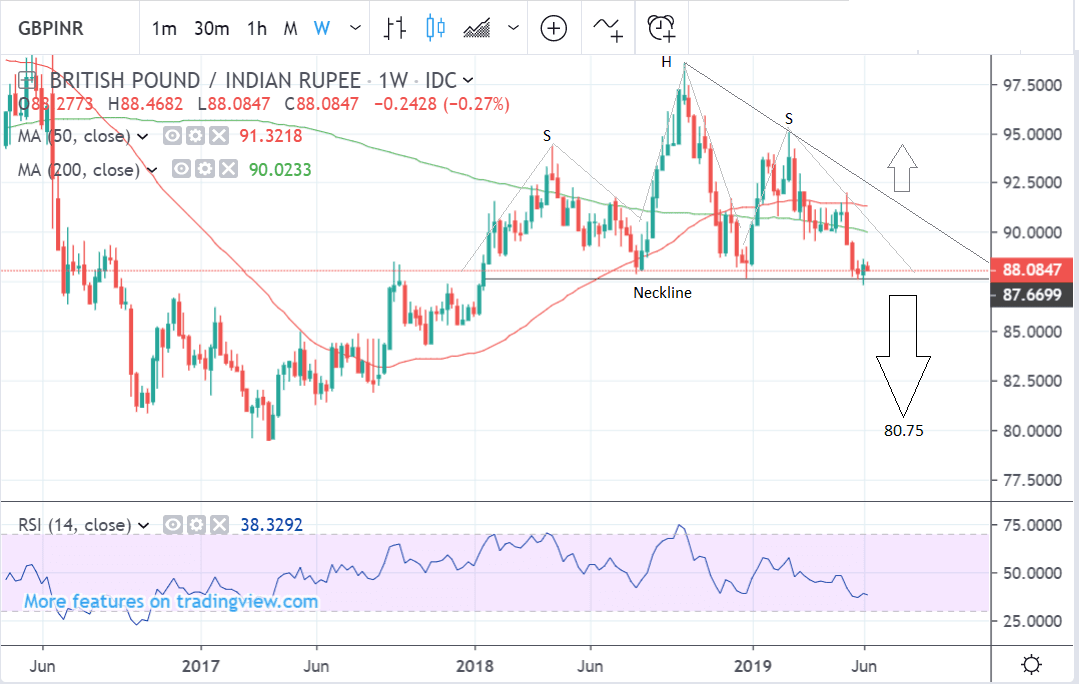 The H&S is composed of three peaks - a head and two shoulders. A break below the neckline triggers the subsequent decline.

The second target is roughly equal to the height of the pattern extrapolated lower, the usual method for forecasting follow-through for an H&S.

Only a break above the line drawn from the peak of the pattern connected to its right shoulder at around 91.90 would invalidate the H&S’s bearish potential.

The Rupee: Global Sentiment, Oil Prices are Key this Week

There are no major domestic data releases or events on the horizon for the Rupee so it is more likely to be impacted by global risk trends.

These affect investor sentiment and therefore net inflows into Indian assets such as share markets and bonds.

Global sentiment improved on Monday, June 10, after the U.S. decided not to impose tariffs on Mexican imports despite Donald Trump having threatened to last week, because of supposed lapses in Mexican immigration control.

After talks with Mexican officials, however, Trump changed his mind and decided not to impose tariffs, and the relief has helped support the outlook for global growth.

Oil prices have been in a sharp decline recently but are 0.28% higher so far this week, with WTI trading at $54.20 per barrel. This follow’s last week’s strong recovery. 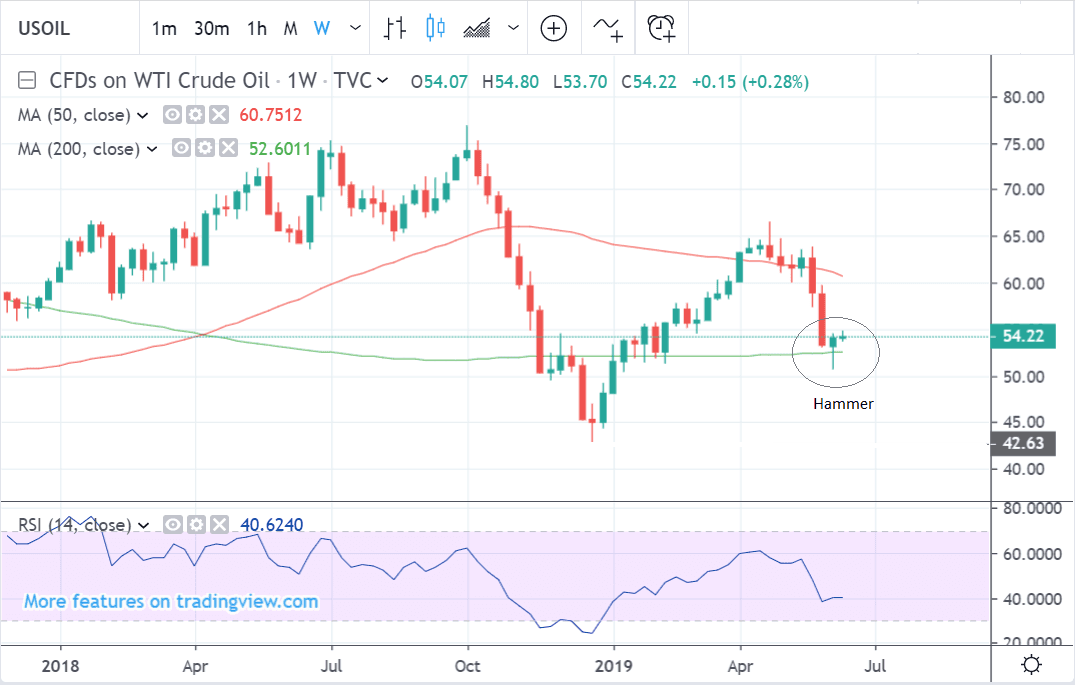 From a technical perspective, it is easy to see why the recent downtrend has stopped over the last few weeks.

The pair fell to support from the 200-week MA at 52.00 and formed a bullish hammer candlestick (circled). These two signs combined reflect strong reversal potential. At the very least this indicates a fairly strong rebound or correction.

Although the downtrend is still likely to eventually resume, just because it was so steep and sharp it may be a while before it does, and there is even a chance that it may have formed an important long-term low.

If prices go higher, therefore, as they are set to over the next few weeks it is likely to devalue the Rupee, and keep GBP/INR higher.

A key driver of higher oil prices are sanctions on Venezuela and Iran which have removed their supply from the market. Sanctions are unlikely to be lifted, especially during the term of this U.S. President given his foreign policy style.

A major driver of lower prices, on the other hand, are global growth concerns as a result of the U.S.-China trade war, which look set to rumble on indefinitely.