- Sterling loses some of its shine

The British Pound was seen relinquishing many of the previous day's gains following the release of data that confirms the UK's labour market continues to soften.

First the good news: the UK unemployment rate unexpectedly dropped to 3.8% in the month of September according to the ONS, down from the 3.9% reported in August which was forecast by market participants to remain unchanged.

However, in a somewhat confusing twist, the fall in the unemployment rate comes as it is reported the three-month-on-three month change in employment fell by 58K. This was however better than the 94K decline markets were expecting.

While the data beat estimates the figure nevertheless represents the biggest fall in jobs in over four years, and this might explain why the Pound is seeing some weakness.

On the all-important earnings front, estimated annual growth in average weekly earnings for employees in Great Britain was 3.6% for both total pay (including bonuses) and regular pay (excluding bonuses).

Both were forecast to read at 3.8%, this figure will therefore disappoint the markets.

However, in a clear indication that the economy is slowing, the number of job vacancies being created by the economy has contracted again. 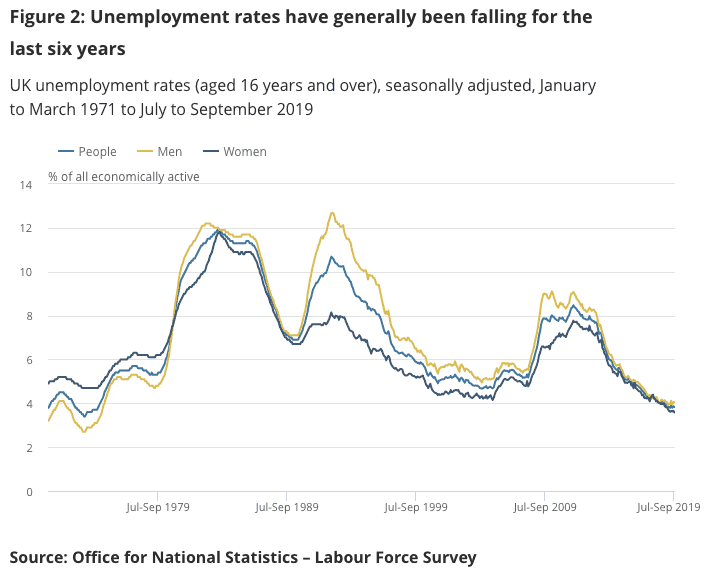 On balance the numbers point to an ongoing softening in the UK economy, and the latest numbers will justify the Bank of England's stance that an interest rate cut could be delivered in 2020.

On balance, the figures aren't exactly helpful to Sterling, and this might explain some of the softness we are seeing in the exchange rate at the time of writing.

But there is an election on, and we remain of the view that any moves in the currency stemming from data will ultimately be faded as the real point of concern is the December 12 vote.

"After GDP growth disappointed expectations yesterday, the smaller fall in employment than expected in the three months to September was something of a relief. But it was a mixed picture with pay growth also coming of the boil. Nonetheless, at the margin the figures probably reduce the immediate need for the MPC to adjust interest rates before it is clearer how Brexit will pan out," says Andrew Wishart, UK Economist with Capital Economics.