- EUR/USD is falling again given fears over Turkish currency and debt.
- Spanish banks are safe in event of a write-offs but Italy is vulnerable.
- Technicals conflicted, but 200-week MA stands in the way of deeper fall.

The Euro has started to weaken again following a brief recovery at the start of the week, with the single currency plunging to lows of 1.1365 Wednesay over fears the Turkish debt crisis could ensnare the Eurozone banking sector.

The latest sell-off may have taken investors by surprise as many analysts had said the Euro was relatively 'cheap' at 1.15 and, therefore, unlikely to go any lower. But lower it went and the question now is how much further down it can go?

The worst of the crisis now seems to over for the European banking sector and ECB officials have already sought to calm fears by cautioning markets against dramatising the crisis and its effect on the Eurozone.

"Overnight, the Bundesbank’s Joachim Wuermeling, who sits on the ECB’s banking supervisory board, said investors shouldn’t “over dramatise” the risk to the European banking sector from Turkey and that the ECB could always ask exposed banks to put more capital aside, " says Nick Smyth an analyst at BNZ.

The market remains sceptical, however, with this best reflected in falling European shares. Share indices have been led lower by the banking sector.

"The Eurostoxx index is 0.5% lower, weighed down by the banking sector. The European banking index fell to its lowest levels since late 2016, with BBVA and UniCredit (two banks with exposure to Turkey) down around 3%," says Smyth.

Given the EUR/USD pair is thought to be undervalued below 1.1500 any further downside may be short-lived, a view endorsed by Julian Chillingworth, chief investment officer at Rathbones, who said in an interview with Bloomberg News the Euro will likely go down - but only in the short-term. The inference being that it may recover in the longer-term.

"The Eurozone banking system is resilient to outside shocks and Spanish banks' tier one capital ratios mean they can absorb a write-off of Turkish debt," adds Chillingworth. "And given Spain's BBVA is most exposed of all Eurozone banks there do appear to be finite limits to damage from Turkey contagion."

However, if the Eurozone is so well insulated to the shock from the Turkish debt crisis it appears strange that EUR/USD is renewing its sell-off.

One possible factor that may be pushing it lower is rumours Italy's government is concerned about the impact of Turkish write-downs on the Italian banking system, which may be more vulnerable to a crisis.

"Sentiment continues to be undermined by investor fears about Italian bank exposure to Turkey that are compounded overnight by a Bloomberg headline citing an unnamed official mentioning Italy in the context of the newly installed government having had contact with the ECB over a discussion on “market risks”," says a note from Citibank.

The Turkish authorities helped ease the crisis on Tuesday by announcing another raft of liquidity measures designed to ensure Turkish banks remain afloat. These include limiting currency market activity for banks and also reducing regulatory capital requirements for many lenders.

The moves, while welcome, did not go far enough. Investors wanted to see the CBRT raise interest rates to curb runaway inflation and slow the decline of the Lira, as well as a more conciliatory approach toward American pastor Brunson.

Some were keen to see less fiscal largess and an openness to International Monetary Fund involvement in the government's economic strategy were important too. Given the provisions announced fell short of these expectations, the Lira and Euro could continue to fall over coming days.

From a technical perspective, the weekly chart is showing potential for further weakness. The bearish head and shoulders pattern (H&S) suggests a much deeper move downward is in the cards, potentially taking the pair all the way down to 1.0957. 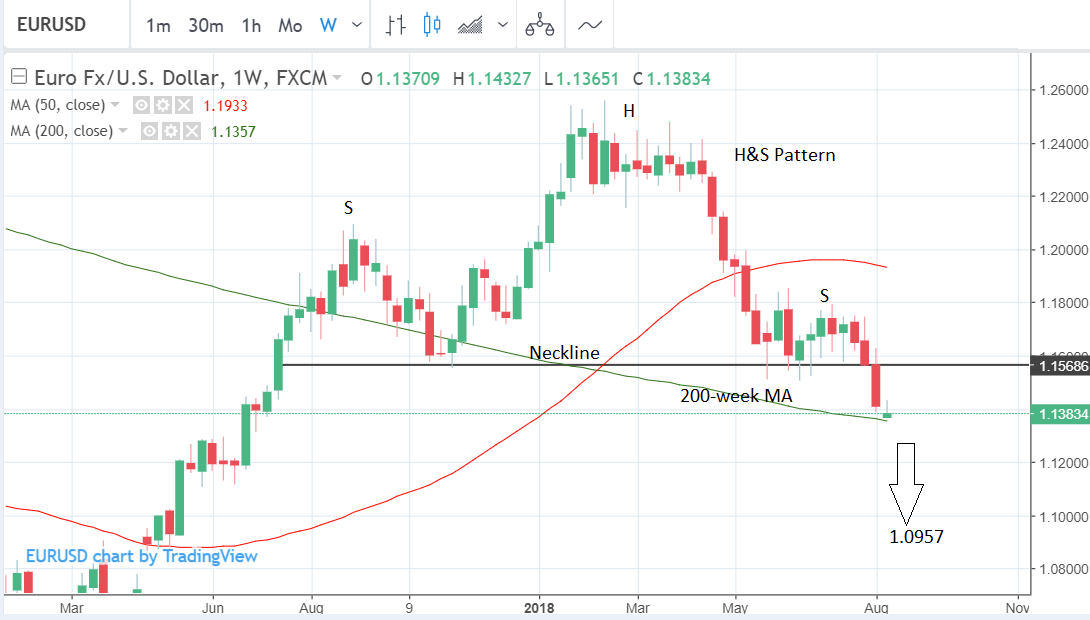 Yet at the same time the exchange rate has just touched a significant level as far as technical analysis goes - the 200 week moving average (MA). Prices often stall or reverse on meeting the 200-week MA so it is possible EUR/USD could pivot and then move higher.

Given the risk of a recovery from the 200-week MA we would ideally wish to see a clear break below it and its sphere of influence before forecasting more downside. Such a break would be confirmed by a move below 1.1290.

Further support for a more bullish move comes from Elliot Wave analysis, which posits that the market moves in broad 5-waves of buying and selling.

According to Elliot Wave analyst Alex Geuta of FX Broker Liteforex, the EUR/USD is currently descending in a wave 5 (v) lower after forming wave 4, where it oscillated in a triangle before breaking lower.

Geuta's target for the end of wave 5 (v) is between 1.1300 and 1.1420. It is possible the exchange rate has reached the end of its wave formation which, having begun at the 1.25 February highs, would mark the beginning of a new medium-term recovery. 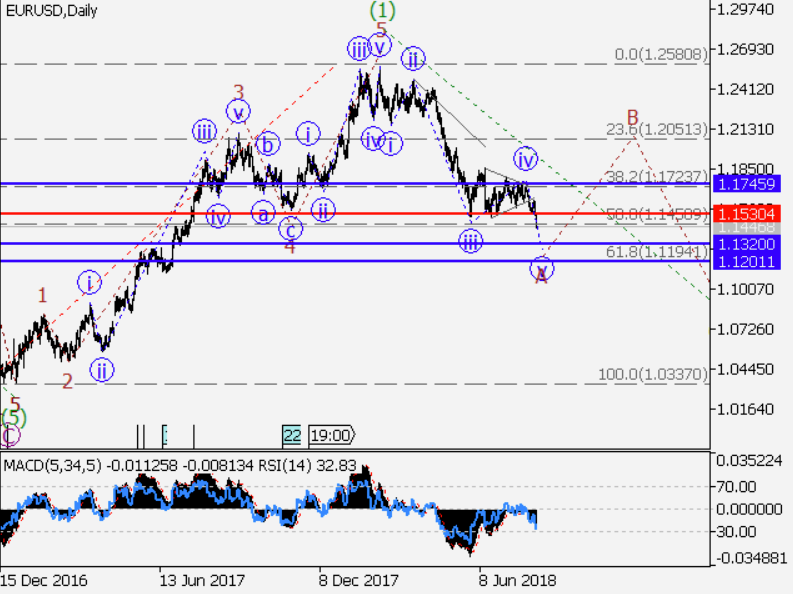