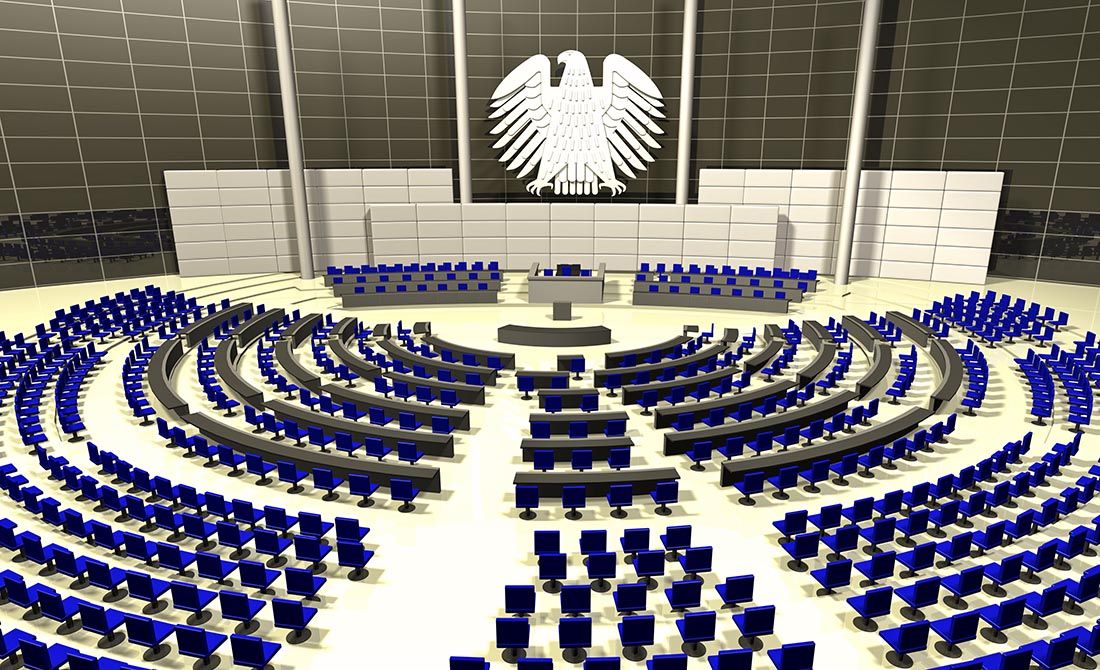 Above: Germany's SPD party will vote on whether or not to prop up German Chancellor Angela Merkel in the country's Bundestag. © Stefan Yang, Adobe Stock

Nerves over potential political risks in the Eurozone could resurface to harry the Euro over coming days.

Sunday, March 4, is a risky time for the Euro: Markets will watch the vote by members of the SPD party in Germany to decide whether they want to join a Euro-friendly grand coalition (or GroKo in Berlin-speak) with Angela Merkel's CDU party while the Italian general election also takes part on the same day.

Most analysts and currency market commentators currently see little fundamental threat to the Eurozone and the Euro being posed by the two events and markets appear relatively relaxed.

But that doesn't mean there can't be jitters going forward and any associated moves in the single-currency.

"The EUR cannot entirely avoid political risks in Germany and Italy. (On Sunday SPD party members vote on the coalition agreement, and Italy holds a general election.) While not a game-changer for the medium-term uptrend, the lingering event risks offer a great reason to take profit on a well-populated trade," says a strategy note from global investment bank TD Securities.

Based on potential risks to the single-currency, currency strategist Abbas Keshvani at Barclays recommends selling the Euro ahead of the two political risk events while buying the Yen in a classic risk/safe-haven play.

Of the two risks, it could in fact be argued that the greatest appears to be the German one as only a slim majority of SPD members want to join a coalition with the CDU and, where it is feared, a late-rush of new socialist members will tilt the SPD membership against allying with the CDU at the last minute.

If the GroKo fails then Germany will either have to have a new set of elections or be ruled by a minority government.

Such an event would likely derail plans for a greater integration of Europe starting with deeper financial integration as proposed by Emmanuel Macron and Angela Merkel. It could also lead to higher borrowing costs for the European periphery countries like Greece and Portugal which is likely to weigh on the economic growth outlook.

A failure of GroKo "would likely thwart Franco-German coordination on keeping borrowing costs for peripheral EU states low, resulting in a rise in periphery spreads. We also expect downside risks to EUR to play out over days or weeks on the reassessment of long-term EU prospects in the event of the SPD rejecting GroKo," says Keshvani.

The end result could be a sell-off in the Euro.

"A German coalition government appears to be priced in. We caution that no-deal surprise (low probability) could trigger EUR-long unwinding as fear of re-election may resurface," says Saktiandi Supaat, a currency analyst with Maybank in Singapore.

Previously many analysts had dismissed the chances of the anti-EU Five Star Party (M5S) gaining a majority in the Italian elections and since they were avowedly against coalitions too, it seemed impossible they would get anywhere near acquiring power and threatening the fabric of the EU, thus the Euro rose as risks from Italian politics were ironed out.

Barclays, however, see fresh risk coming from the Italian elections - not so much from an 'Italexit' so much but from resistance to deeper EU integration and reform.

M5S have since changed their stance on membership of the EU saying they would probably not go to the extent of holding a referendum to leave. Even if they did it would probably not be legitimate as under Italian law referend cannot be used to change the constitution. The only other way to force an exit from the EU would be if the government had a two-thirds majority which is impossible as polls stand.

But M5S is leading polls with 27% and now seem to be open to a coalition with another populist far-right parties, thus there is a slightly elevated risk of them gaining power.

Overall it is unlikely the elections on Sunday will reveal anything conclusive immediately as there probably be the necessity of coalition talks afterward, but there is a risk that if M5S are part of the next government, and if so could make relations with Brussels tense.

"Nonetheless an M5S-led government would challenge the EU, while its presence on the European Council could make moves towards EU integration more difficult. In Italy, the party could reverse recent labour reforms, undermining Italy’s long-run potential growth and debt sustainability. As such a strong performance by M5S would likely be a shock to the markets, suggesting downside risks to EUR in the short term," says Keshvani.

Barclay's analysis leads it to recommend shorting the Euro against the Japanese Yen - or selling EUR/JPY this week, in the run-up to the elections.

"We prefer to express this EUR short versus JPY as the due to the strength of Japan’s economy and JPY undervaluation. Moreover, demand for JPY as a hedge against unspecified risks has picked up after the equity rout earlier this month. (entry 131.32; take-profit 128.58; stop-loss 132.69; risk-to-reward ratio of 1:2)," says Keshvani.